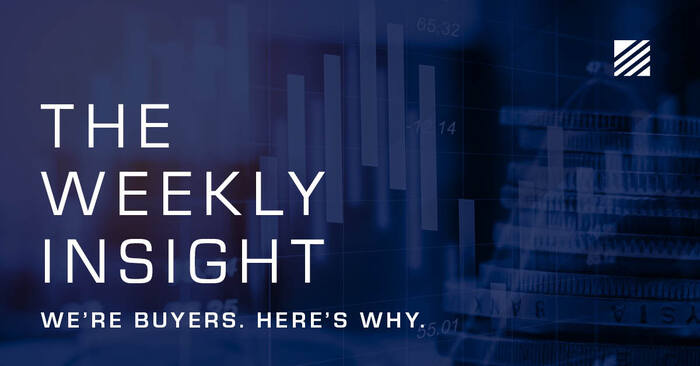 We don’t love “market pundits.” Longtime readers of this memo know that. There are folks in our industry that hang their hat on having a soundbite worthy message that is usually significantly more negative – or more positive – than the rest of the world and they earn clicks and views by promoting that opinion through the news media that is always looking for a quotable stance.

We hope you know by now that these memos aren’t about self-promotion (if they are, we’re not particularly good at it!), but are instead about giving you our best take on where financial markets are today. Sometimes our opinions change based on a continually evolving market. But we hope you feel like we’ve been intellectually honest with you about where we think the world is going.

Which brings us to today. Last week was, well, brutal in the U.S. equity markets. Yes, Friday’s market closed up (barely) and markets ended the week down 2.62%. But in the middle of it, when markets were off nearly 7% from their Tuesday close, things weren’t feeling very rosy. It engendered headlines like this from the Wall Street Journal:

We’ll be blunt: we don’t know where the market is going to find a bottom right now. It seemed last week that entering a bear market (down 20%) was a limit the market wasn’t willing to cross. Maybe that remains true. Maybe it doesn’t. There is no way to predict what will happen in the short-term.

But there are a few things we KNOW. Things we know deep down in our bones. And things that are backed up by hard data. They’re the data points that aren’t sexy when everyone wants to worry about the end of the world. But they’re too glaring to ignore in this environment. And they form the basis for our core beliefs today:

We’ve beaten the inflation story to death, so we’ll refer you to past memos if you’d like more information that topic. We would suggest you look at our commentary here.

This week we’re going to walk you through our thinking on the strength of the U.S. economy.

If you Google the word “recession” and look for recent news stories it’s…rough. Headlines like “Is a Recession Coming?” and “Economy May Seem Healthy. Just Wait for the Next Recession” dominate the links. But what are the real market analysts saying? And what data are we seeing today that may indicate a recession? And how bad – really – is this market?

Let’s start on recession. There are several groups that put out “recession checklists.” All the big banks and research firms do so. One of our favorites is Macro Research Board (MRB). But there are countless others and they’re all saying something similar: a recession is not on the horizon.

MRB uses twenty-four data points to show whether we’re on track for an upcoming recession. Today, only two of the twenty-four indicators are flashing trouble signs. 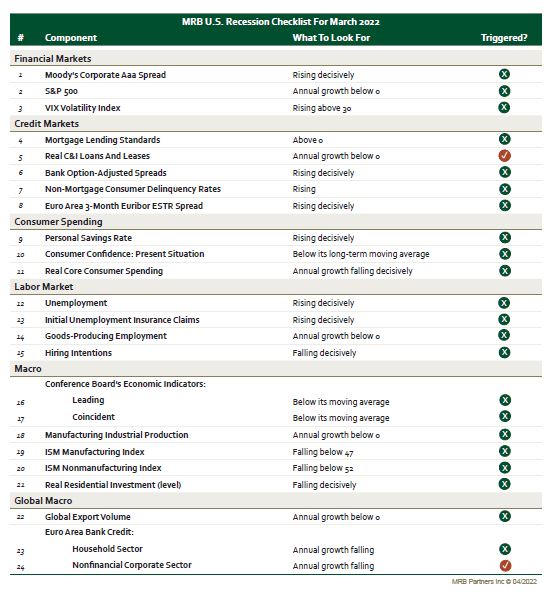 That’s fine, Insight, but maybe when it flashes two that means we should run, right? Nope. The chart below shows the recession checklist relative to oncoming recessions. As you can see, we are improving relative to a recessionary risk. 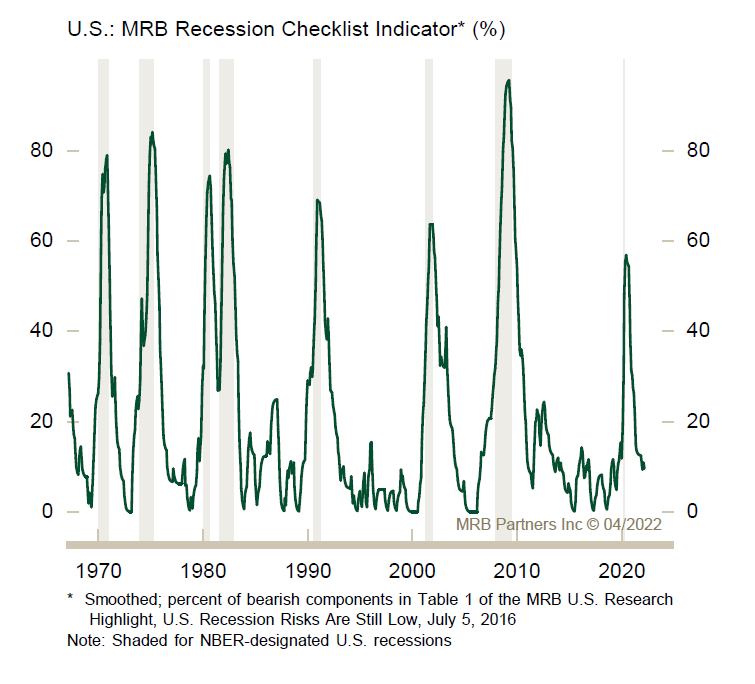 And then there is the consumer, which makes up over 70% of the U.S. economy. Consumer sentiment is improving, and retail sales are still extraordinarily strong. 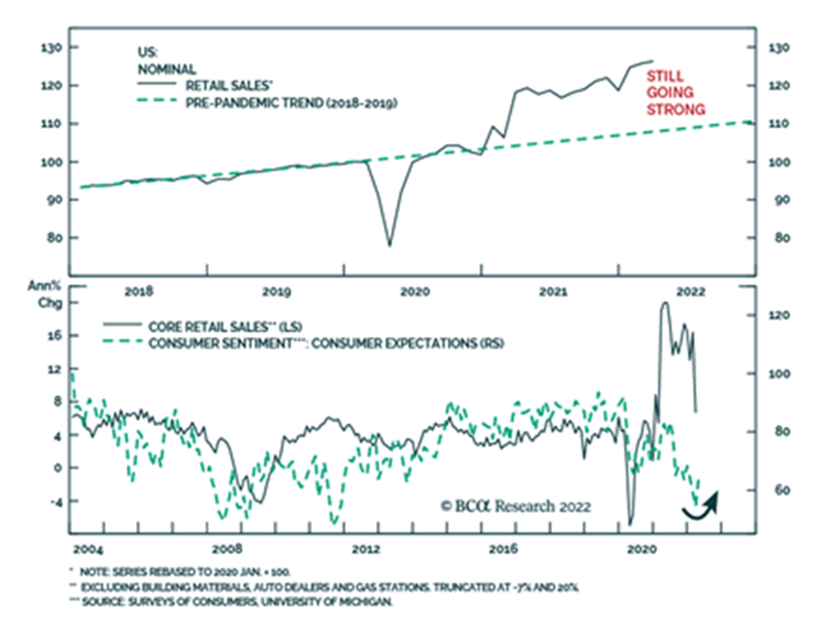 But what about the drag inflation is having on the consumer? That must be horrible, right? It undoubtedly isn’t fun. But we must be realistic about it. We’ve shown in past memos that U.S. households have inordinate amounts of cash right now (more than four times the normal amount) and have generationally low levels of debt service payments. Inflation will certainly affect that in the long run, but it’s important to have some perspective. Let’s look at food and energy costs.

Food and energy have been two of the biggest drivers of inflation. Of that there is no question. But how does our spending on food and energy compare historically? This may not be a popular answer when gas is selling for $4.50 a gallon, but here’s the truth. It’s quite low: 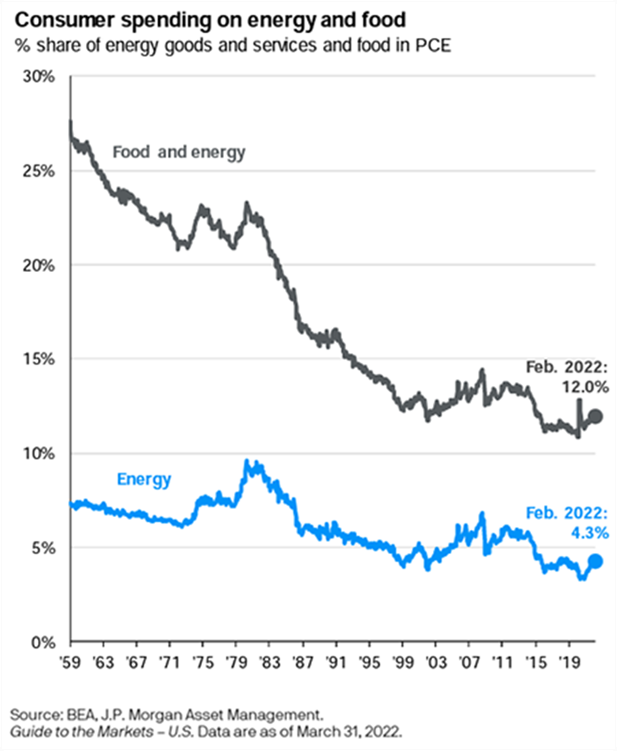 Food and energy expenses came to a total of 12% of consumer spending in February. That is significantly lower than the nearly than 15% we saw in the mid-2000s. And it’s way below the 25%+ folks saw in the 1960s. Is it higher than pre-pandemic levels? Yes, but marginally.

And all of this is happening at a time when S&P 500 earnings – despite what you hear about Target! – are significantly outperforming this year. with more than 80% of S&P 500 companies reporting, earnings growth is on track for 11.1% when the expectation prior to the end of the quarter was less than 5%. 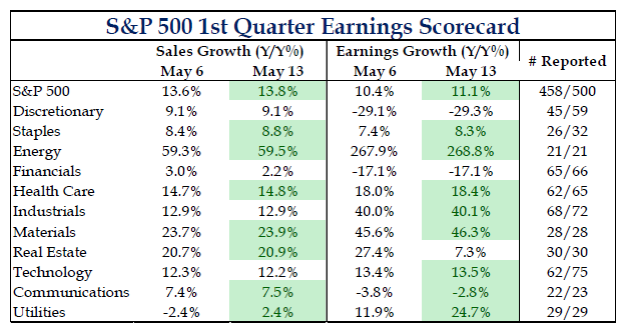 If earnings are good and the economy is strong, why is the market down nearly 20%? As we’ve been saying for more than 3 months now, it’s all about inflation and the Fed. What we’re going through right now actually isn’t unprecedented. There is a long history of markets dropping at the onset of interest rate hike cycles. 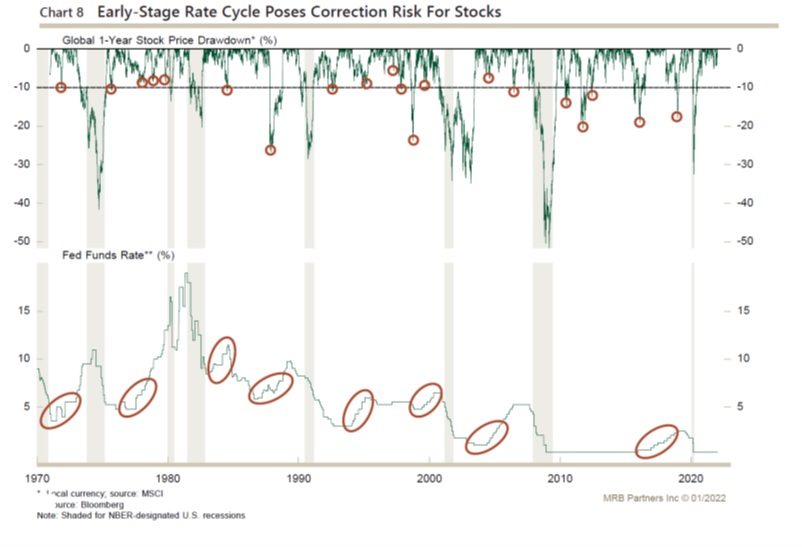 But despite that early volatility, we know that the long-term track record of hike cycles is for positive stock market performance. 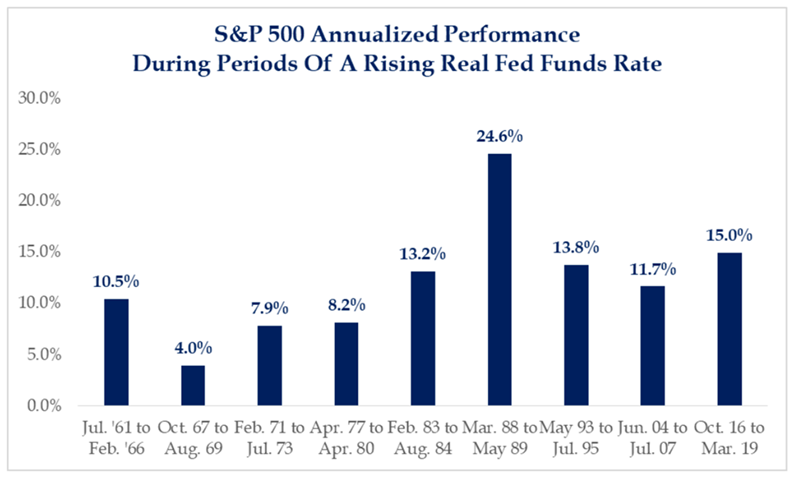 So that brings us back to the phrase we used above: intellectual honesty. If we’re being honest with you – and ourselves – we don’t have a timeline for when all this turns. Maybe last week was a harbinger of things to come (the market bouncing off a bear market limit). Or maybe there are more tough times ahead.

But we have harped on the “be fearful when others are greedy” mantra for a long time. And that’s what we’re doing today. Insight clients will be getting trade notifications this week about us upping our allocation to equities in our core models (Balanced, Conservative Growth, and Growth). And we’re putting cash to work where it is appropriate. We may not be right on this answer in the short-term. But we love this approach in the long-term.

In the meantime, we’ll keep being blunt in these pages. Because there is far too much fear in the mainstream media. And the world isn’t ending, despite what they’d like you to believe.