The Weekly Insight: The Inflation Crossroads 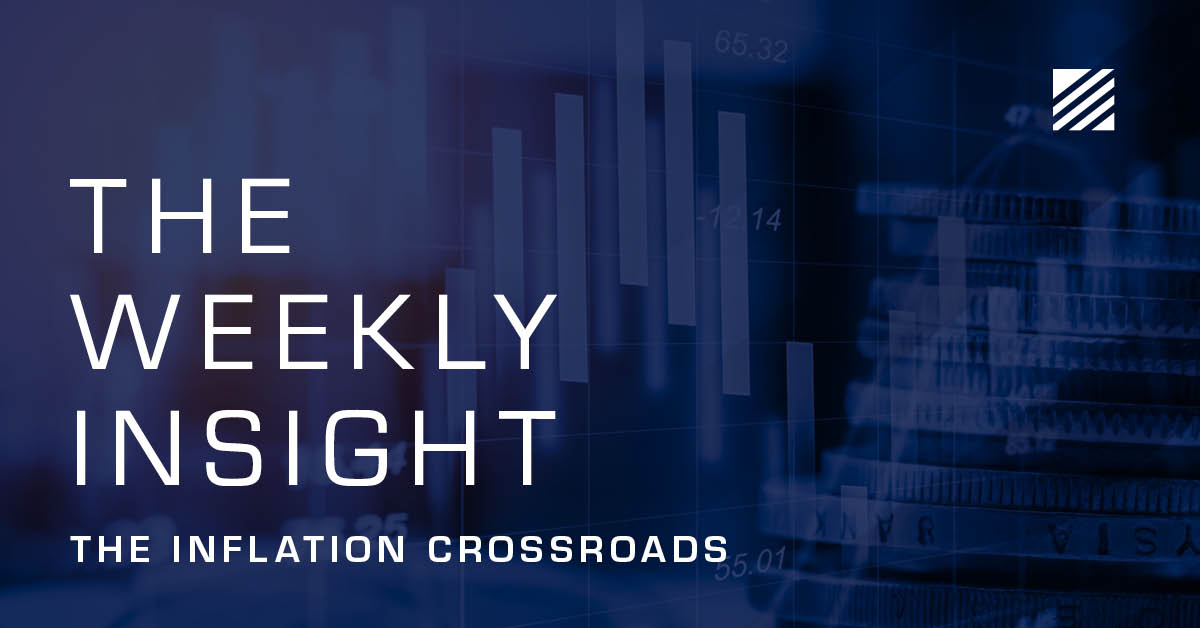 A little good news. A little bad news. And a whole lot of ambiguous news. So far in 2022, that pattern seems to repeat itself each week. And the market doesn’t seem to like it one bit. Last week – especially on the inflation front – that was certainly the case.

The world is torn right now on what the future for inflation will be. On one side are the economists who believe things will continue to get out of hand. On the other are those that see the worst of the inflation storm behind us. Last week’s inflation data gave both some ammunition.

So where do we fall on that spectrum? We do have an opinion, and we’re going to walk you through it this week. But before we do so, we think it’s important to walk through the data and the arguments from both sides.

What Did the Data Say?

First let’s go through some terms so everyone is on the same page. These are going to be important to this discussion:

Let’s start by looking at the year over year numbers: 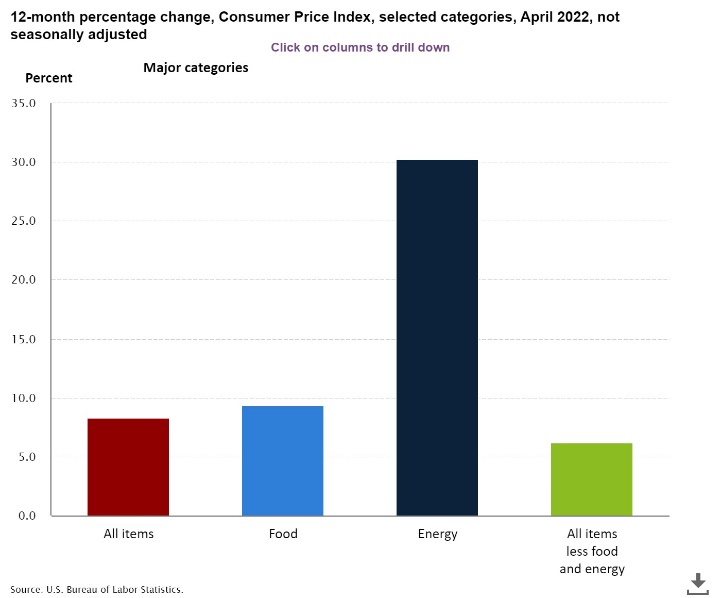 Total CPI grew by 8.3% year over year in April. This was down from the peak of 8.5% that we saw in March. As you can see, food and energy inflation both outpaced Core CPI (noted as “All items less food and energy”) which came in at 6.2%. This was also below the March reading of 6.5%.

But before we get too excited about that, it’s also important to understand where it grew and where it didn’t:

All items inflation in April (including food and energy) grew at only 0.3% month over month. Why? Energy prices fell sharply in April causing a dip of 2.7%. It’s been a long time since we’ve seen those prices decline.

So, is all of this good news or bad news? It depends on who you ask! Below is a screenshot from your authors phone alerts on Wednesday morning when the data came out. Even the people who report on this data couldn’t come to a conclusion. 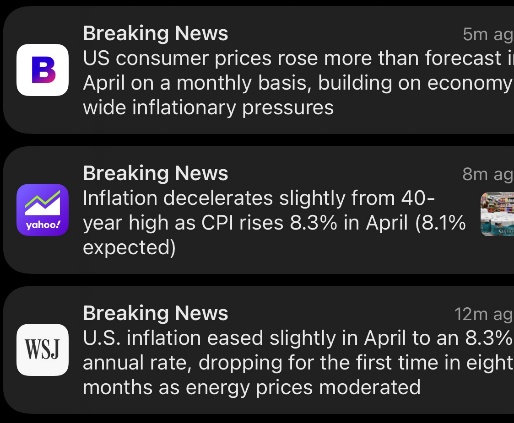 First let’s be clear: the market surely didn’t like the data! The S&P 500 was down sharply after the initial reaction to the data. It took a strong rally late Thursday and into Friday to get us back up above those levels and, even so, the market ended the week down 2.41 percent. 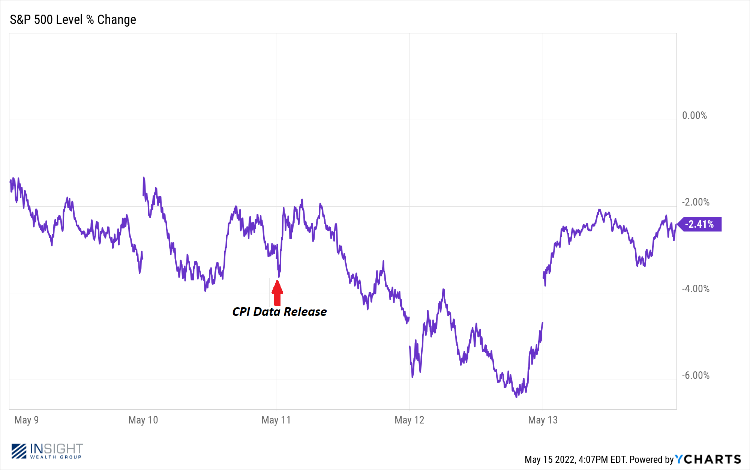 The bears on this topic clearly focused on the month-over-month miss, not the year-over-year beat. Why? By their reasoning, this means inflation is likely to be stickier and force the Federal Reserve to be more aggressive raising rates. Nancy Davis of Quadratic Capital Management explained it to Fortune.com this way:

“The combination of elevated inflation and Federal Reserve rate hikes increases the risk of stagflation, which is an awful environment for investors that typically results in stocks and bonds losing value simultaneously”

They are also viewing the drop in energy inflation as a feint for investors. As they see it, the drop we saw in April was temporary as the impact of rising demand and the war in Ukraine will continue to drive prices at the pump higher.

The Case for Calm

On the other side of the coin are the economists that see inflation starting to moderate – as shown by the year-over-year numbers. Their argument? Inflation is peaking and, while still high, the expectations are already built into both investors and consumers calculus.

They would argue that we will need to give the Fed’s rate policy time to have an impact on prices. The one area the Fed can most directly impact – shelter – will take a few months before we’ll begin to see the impact of rising mortgage rates. We’re just going to see the April building permits and existing home sales data this week (Wednesday and Thursday respectively). Analysts are expecting the numbers to be down from their March highs, but not by much. Why? The April numbers will only reflect the 0.25% increase the Fed executed in March. It will be a bit before we see rising rates really start to hit shelter.

Many of the big banks are starting to predict that inflation is plateauing right now, before it starts to fall. Morgan Stanley said as much this week. UBS said it a few weeks ago. They predicted the Fed would have inflation down to 3.4% by year end. That would be a fantastic number.

In the end, we all must decide which side of this argument we fall on. As we’ve said for several weeks, we’re on the side of inflation beginning to moderate. But we also admit it may be a choppy ride getting there. This plateau that Morgan Stanley talked about this week could last a month or it could last six months. Even if inflation doesn’t get worse, it wouldn’t be great if it remained at these elevated levels for a long time.

But it’s the stagflation comment that has us the most baffled. We’ll admit that inflation is here, it’s bad, and it may not go away for a while. But to have stagflation you must have inflation and a stagnating economy. Do we have the makings for that? We think that answer is a resounding NO! Consumers have a ton of cash, low levels of debt, and consumer spending continues to be on pace for a successful year. That is showing up in earnings growth for Q1 as well as expectations for the rest of the year.

In the end, we’re going to have to ride this out. Our gut tells us it won’t last terrifically longer – but we may be writing about this same story a month or two from now. Patience will be a virtue in this environment.