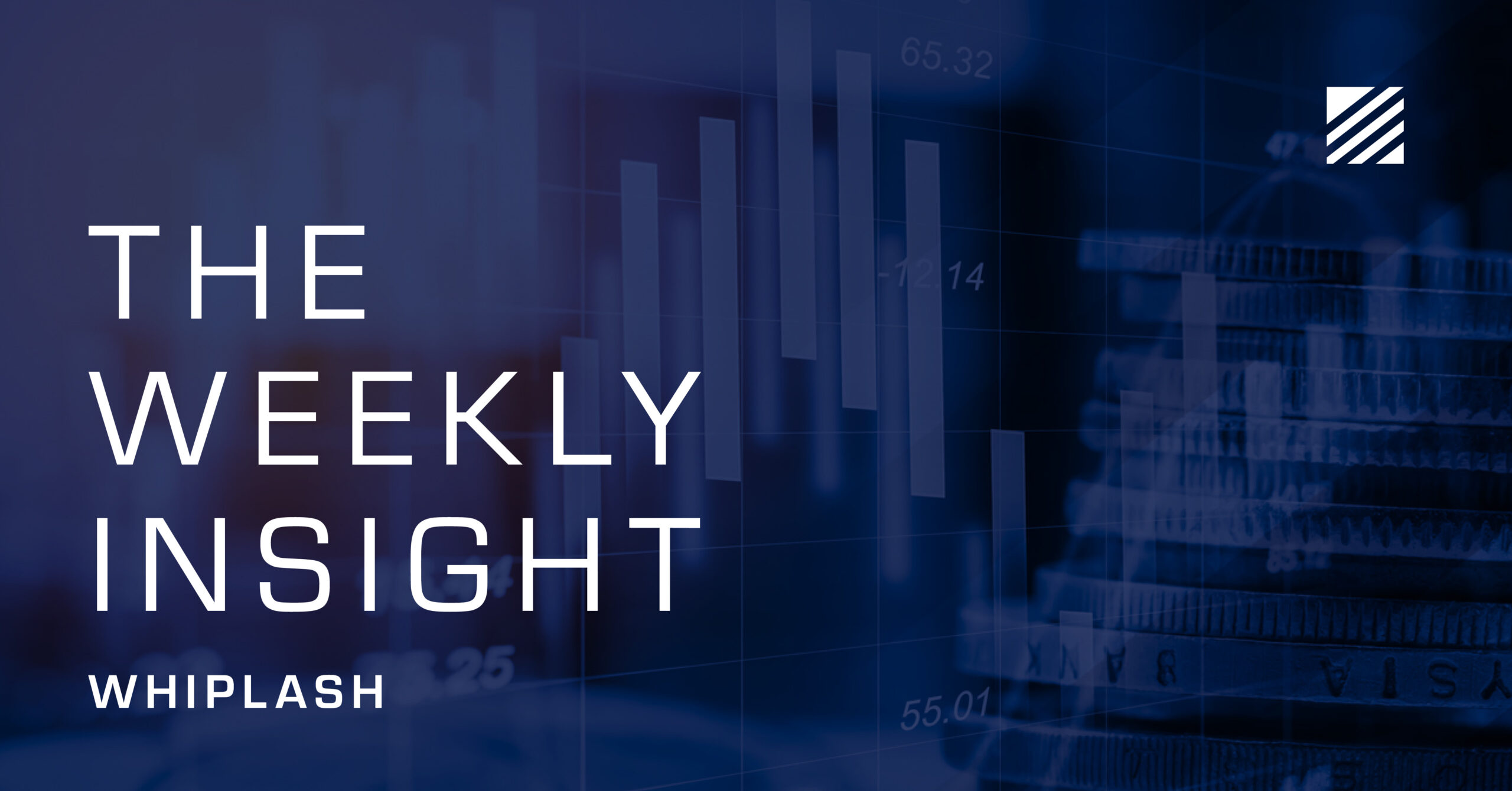 Whew…what a week! When we left off last week, we were discussing the impact fear could have on investment portfolios. And at the time we mentioned that, while we were confident in the long-term path for the economy, we would be sure to tell you if you needed to “RUN!” after Fed Week was over. The good news? No running is necessary. The bad news? Investors probably have whiplash after the week that we just experienced.

We’ll dive into the outcome of the Fed meeting in a moment – as that was certainly the most important news of the week – but we want to point out a couple of statistics first that may not come through in the news reports you’re getting.

The first is the glaring headline that the “market ended a volatile week down after the Fed announcement!.”  Well, yes. Sort of. There was a ton of volatility (more on that later). But the end result? The S&P 500 was down just 0.21%. It was a lot of “drama” without a lot of real action. 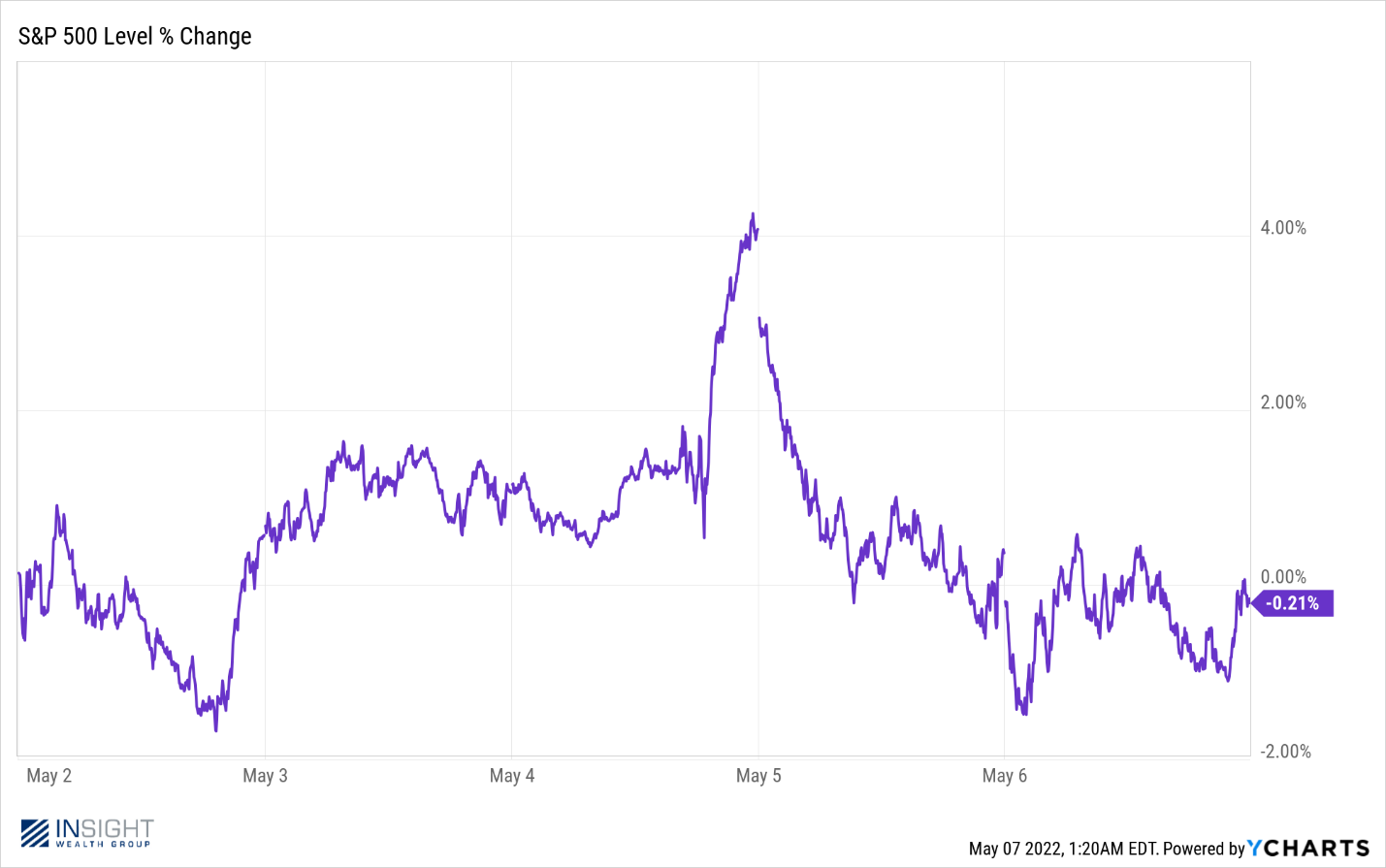 Second, where you were investing this week made a big difference. For example, the Russell 1000 Value index ended the week up 0.62%. The Russell 1000 Growth index? Down 2.91%. Owning high quality, dividend paying companies makes sense in this environment. 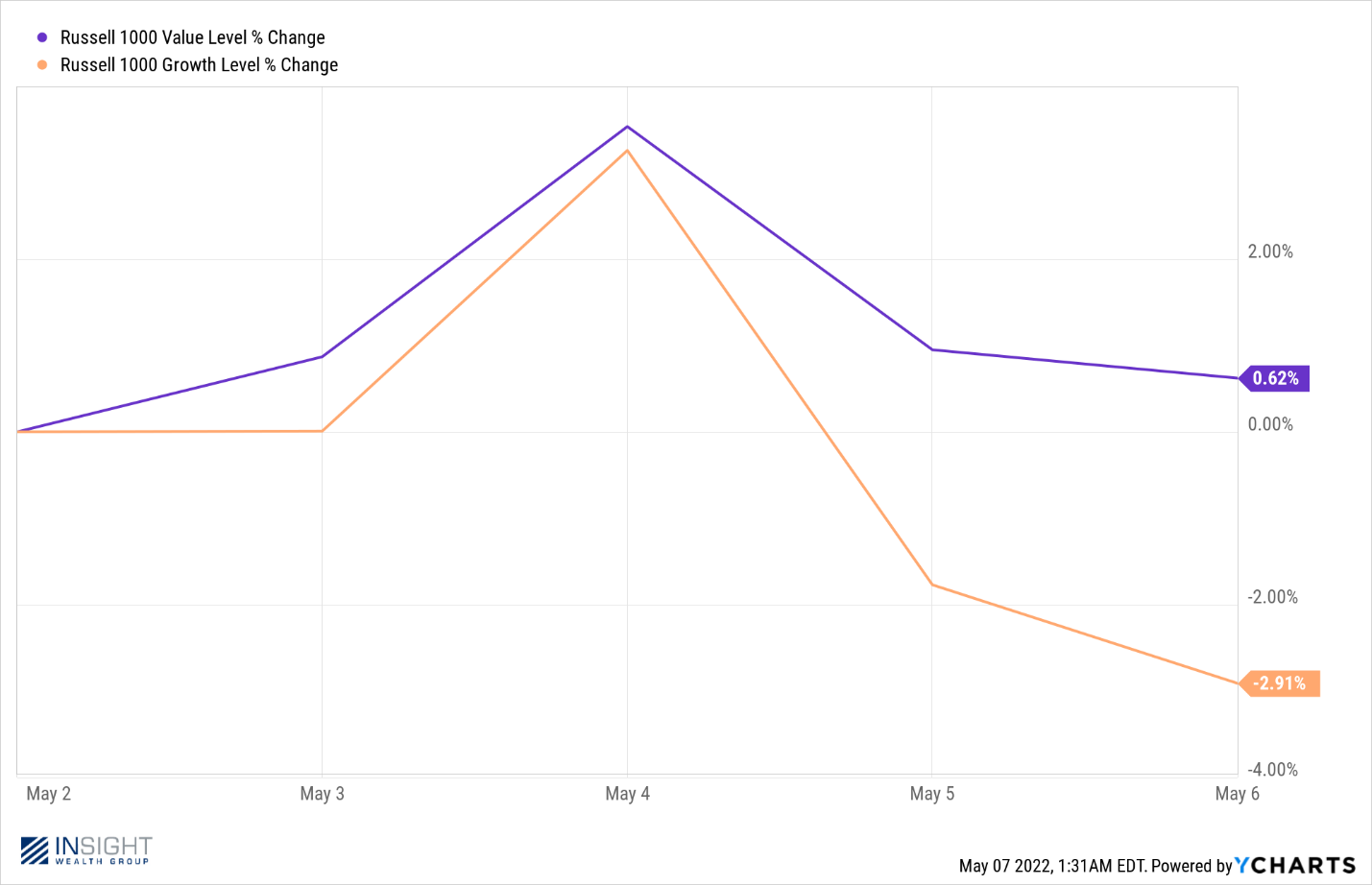 Finally, the one big piece of economic data we got last week – April Jobs data – was rather good news. The economy created 428,000 new jobs last month (higher than the 391,000 expected). But, more importantly, the unemployment rate didn’t come down. That means we’re starting to see some additional workers join the ranks of those looking for jobs. We need that in this environment.

First, Powell did what everyone was expecting. He laid out the 0.50% increase, as well as the Fed’s plan to let assets run off their balance sheet (in an orderly manner if you ask us). Then the questions started. As usual, we watch the press conference along with the market. The market never seems to like it when Chairman Powell starts speaking. But then he was asked the biggest question of the day – from CNBC – will the Fed be raising rates by 75 basis points in the June meeting?

Before we get into his answer here, we want to go through some data. First, prior to the meeting and press conference, we took a snapshot of the CME’s FedWatch tool so you could see what folks were thinking prior to Powell taking the stage. As you can see, the market was convinced we were going to get a 75-basis point hike in June. 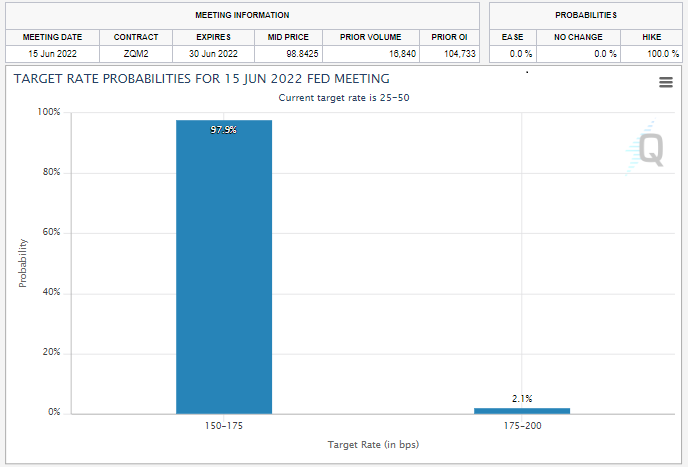 It’s a curious mentality. We’ve never heard Powell or key leaders talk seriously about 75 basis points. But the fear of inflation has gotten so imbedded in people’s minds – along with the fear the Fed will overreact – that market participants had convinced themselves a 75-basis point hike was coming.

So, back to the question. Is the Fed going to raise rates by 0.75%? Here is Powell’s answer word for word:

“So, (a) 75 basis point increase is not something the committee is actively considering. What we are doing is we raised 50 basis points today. And we said that, again, if economic and financial conditions evolve in ways that are consistent with our expectations, there’s a broad sense on the committee that additional 50 basis increases should be on, 50 basis points should be on the table for the next couple of meetings. So, we’re going to make those decisions at the meetings, of course, and we’ll be paying close attention to the incoming data and the evolving outlook, as well as to financial conditions.”

It’s a whole lot of Fed speak. But let’s be clear what he said:

The market loved that answer. It provided clear guidance (something that’s been a bit lacking) for the next two Fed meetings. The worst hike scenario was laid out (50 basis points in June and July) and now we understand what’s going to happen over the next 90 days. The market shot up over 3% based (primarily) on that statement alone.

So, what the heck happened on Thursday and Friday? Why was the market down over 4% the next two days after all this great clarity? We don’t have a perfect answer, but we are fairly sure it’s tied largely to the fact that the market decided it didn’t believe Chairman Powell about 75 basis point hikes. Why do we say that? Here are the probabilities as of the end of the day Friday for the June FOMC meeting. 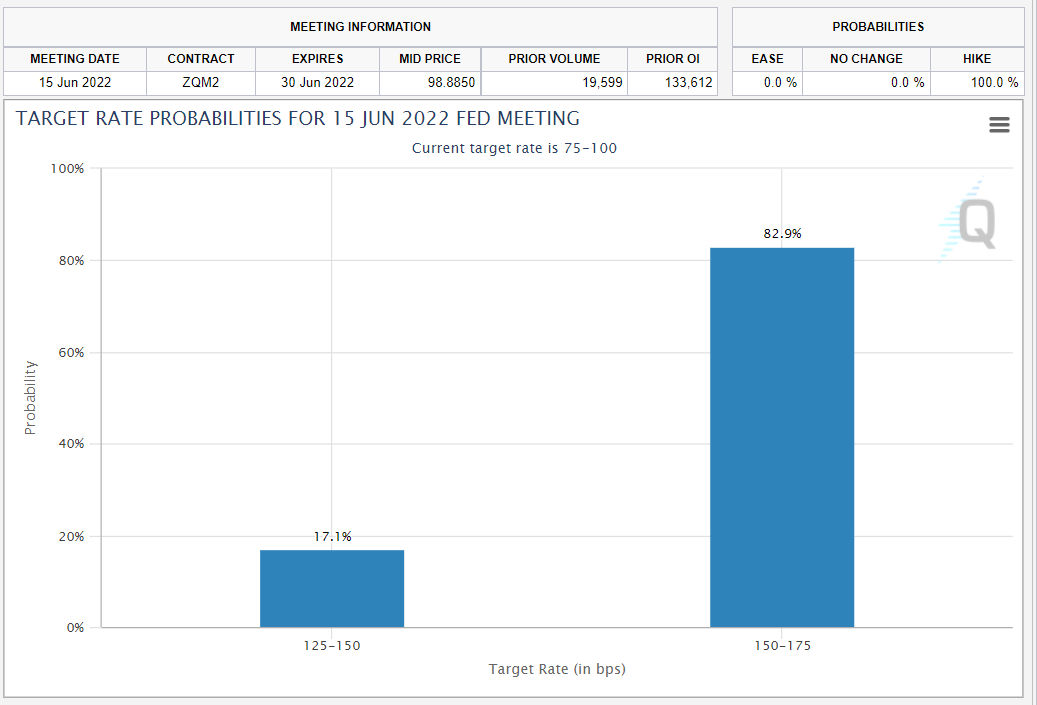 That’s right. After all of that, the market still thinks there is an 83% chance the Fed raises rates by 75 basis points in June.

Why? The market remains unconvinced about what the track for inflation is and the Fed’s ability to control it. They remain unconvinced that 50 basis points in June and/or July is going to be enough. And there isn’t much that’s going to convince them until they start to see some encouraging news on the inflation front.

Guess what? This week is inflation week! One Wednesday we get the CPI numbers which will tell us what happened with inflation in April. The expectation is that inflation will grow 0.40% month over month (up from 0.30% in March). What that number looks like is going to significantly influence the markets over the next 30 days. We would expect the market to be choppy – at best – before we get those numbers. A good print? Combined with Powell’s comments, that should be excellent news for the markets. A bad number (higher than 0.40%) and the market is going to become more convinced that Powell undershot last week. It will likely mean more volatility leading up to the Fed meeting in June.

So now – as we have for the last several weeks – we wait. But we remain convinced the case for fear is significantly overstated in this environment. Maybe the market should be paying a bit more attention to what came out of Powell’s mouth and a little less to what they imagine may be happening behind the scenes.