The Weekly Insight: Looking Down the Field 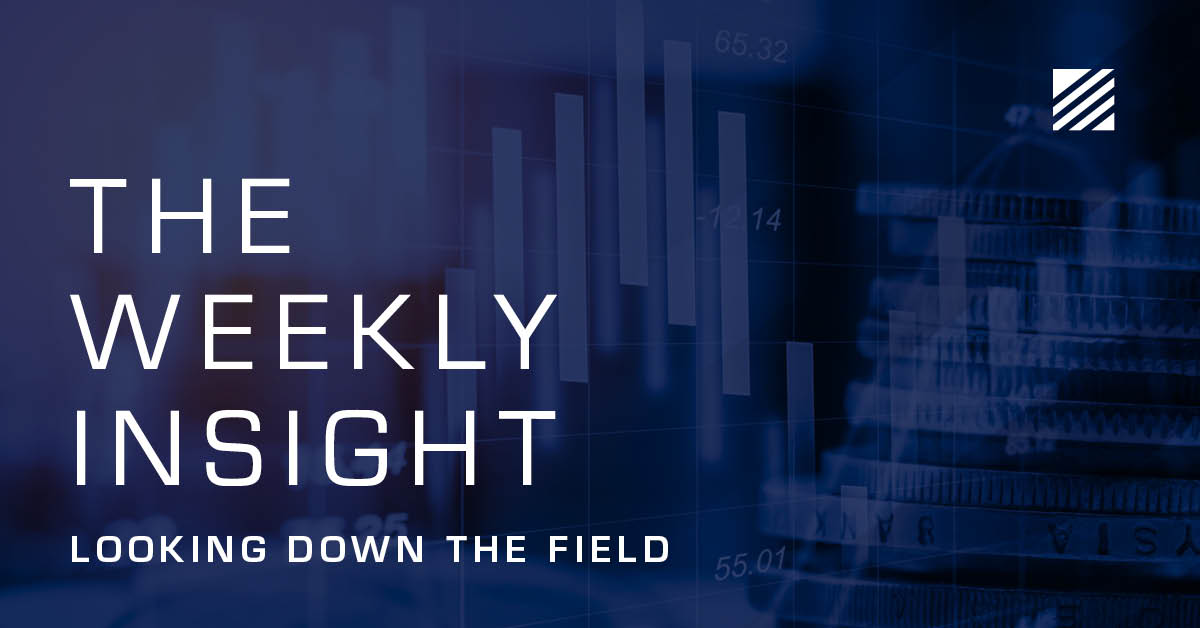 The Weekly Insight Podcast – Looking Down the Field

Phew. That feels better, doesn’t it? We finally had a week in which all major indices ended the week higher! For the S&P 500 that broke a seven-week losing streak. That was the longest losing streak since March 2001.

As readers of last week’s memo know, we announced we were going to be deploying more money into equities in our core portfolios last week. Our justifications (a strong economy, peaking inflation, etc.) remain true today and we’re pleased with the decision. The problem is, it’s never quite that easy! We may have one good week under our belt, but there are still risks – and opportunity – out in the marketplace that need to be understood and weighted into our strategies.

We think you fully understand our optimism at this point (if not, I’d encourage you to go read some of our recent commentary here and here). With that in mind – please don’t misinterpret what we’re about to do this week. We want to spend some time discussing the current risks and headwinds this market faces. It’s possible to be both bullish and risk averse! We remain both.

One of the biggest drivers of the market rally this week was the release of the FOMC minutes from their meeting earlier this month. Reading the FOMC minutes is something akin to watching paint dry, so we won’t subject you to a complete readthrough. But the most important paragraph was this:

What’s notable about this is that – even after a much worse run up in inflation than anyone was expecting earlier this year – the Fed’s expectation for inflation this year is 4.3%. That means inflation is going to have to come down rapidly in the second half of this year (or has already peaked). And their numbers for 2023 and 2024 are down from their expectations given in March.

The rest of the minutes reiterated what Chairman Powell said in his press conference. We should expect fifty basis point rate hikes in the next two meetings, but the Fed will remain flexible. All of that is good news.

So where is the risk? The risk is in the economic data in the meantime. We’ve been seeing a lot of information that would lead us to believe inflation has peaked:

All of that is great news. But a bad inflation print next month (June 10th) ahead of the next Fed Meeting (June 15th) will undoubtedly get the fear and volatility going again. Things are improving, but we’re not out of the woods yet.

We get it – we’re all pretty much done with COVID at this point. And that’s not something we’re upset about here at Insight. But that doesn’t mean we can ignore the tail risk of another spike in cases and the subsequent policy decisions that might cause.

Thankfully, there is no indication we’re going to have a China situation here in the States. Their Zero COVID policy is a folly at best. The idea that a country with 1.4 billion people can completely eradicate an airborne virus just isn’t based on good science. They would have to become a hermit kingdom like North Korea to even have a chance of that – and the news out of North Korea the last few weeks shows even that doesn’t work.

But the Chinese COVID policies are having an impact on the global economy. It was announced that Chinese industrial production – which was expected to grow at a slower than normal rate of 0.40% in April – dropped by 2.9%. At some point Chairman Xi is going to have to reverse course, but that kind of decision is not something that is particularly appealing to him, especially in the year his position is up for debate at the Communist Party Congress.

Here in the U.S., we don’t have any indication of policy errors of that magnitude, but we are seeing rising cases again. In fact, we now have a 7-day rolling average of over 110,000 cases per day. That’s higher than we were before the Omicron wave started in early December (85,133 on December 1st).

We’re starting to see the news stories to reflect it. Headlines questioning mask policies, noting the “highest levels of COVID in six months,” etc., etc. The big question is if there is the desire – or will – in government to take more aggressive action. Or are they as “done with COVID” as the general population seems to be?

One statistic will, we believe, help determine the path forward from a policy perspective: COVID deaths. Because, while the nation crossed the 1,000,000-death threshold recently, it is also notable that substantially less people are dying from COVID today than they were six months ago.

In early December last year, we were averaging approximately 1,300 COVID deaths per day and the number was starting to rise. Today, even though COVID case counts have been rising for over six weeks (and have more than tripled in number), COVID deaths continue to fall. Any COVID death is tragic but sitting at less than 350 per day is the lowest level we’ve been at since last July.

If we don’t see a rise in fatalities, we would anticipate there is no policy reaction to the current surge. That may be right or wrong – but it will be good for the economy.

As it seems often happens with these sorts of tragic events, the world seems to be…normalizing the war in Ukraine. It’s not the minute-by-minute news story it has been. But the battle rages on and the Ukrainians are valiantly fighting for their homes and freedom.

But what does all that mean for portfolios? There are two ways we need to address it: the broader market impact and the impact on commodities that come from Russia and Ukraine.

In terms of the broader market impact, it has largely already been felt. The concern would be a significant escalation that would drag NATO into the conflict. That seems less and less likely today. Ukraine has significantly degraded Russia’s military and made it significantly less likely – or possible – that Putin could engage the broader west in a conflict.

That is not to say a cornered, wounded animal isn’t dangerous. Putin – and Russia – certainly still are. But barring the use of nuclear weapons, we see a limited likelihood that NATOs involvement stretches beyond delivering supplies and intelligence to Ukraine.

The commodity front – specifically food and fuel – is where things get interesting. You know by now that food and fuel inflation has been significantly higher than normal. But as we pointed out last week, consumers are still paying a smaller amount of income to those two areas than they were 10, 15, or 20 years ago.

In the short-term, the picture on food and fuel will continue to remain volatile. But we believe that is an opportunity, which is why we remain significantly overweight energy in nearly all our strategies. We’ve maintained that overweight throughout this year and see no reason to reduce it today.

We’ve entered an interesting period where oil and gas producers are seeing substantial cash flow. But instead of putting that money back into the ground for new production, they are instead focused on keeping supply stable and returning capital to investors. That is not the normal reaction in times of prices spikes like these – but if it lasts it should be good for investors.

We’ll leave it there for this week. We hope you were able to enjoy the Memorial Day weekend with your family. It is a solemn and important weekend as we honor those who have given their lives to defend our freedom. What we’re seeing today in Ukraine is an excellent reminder of the importance of their sacrifice.