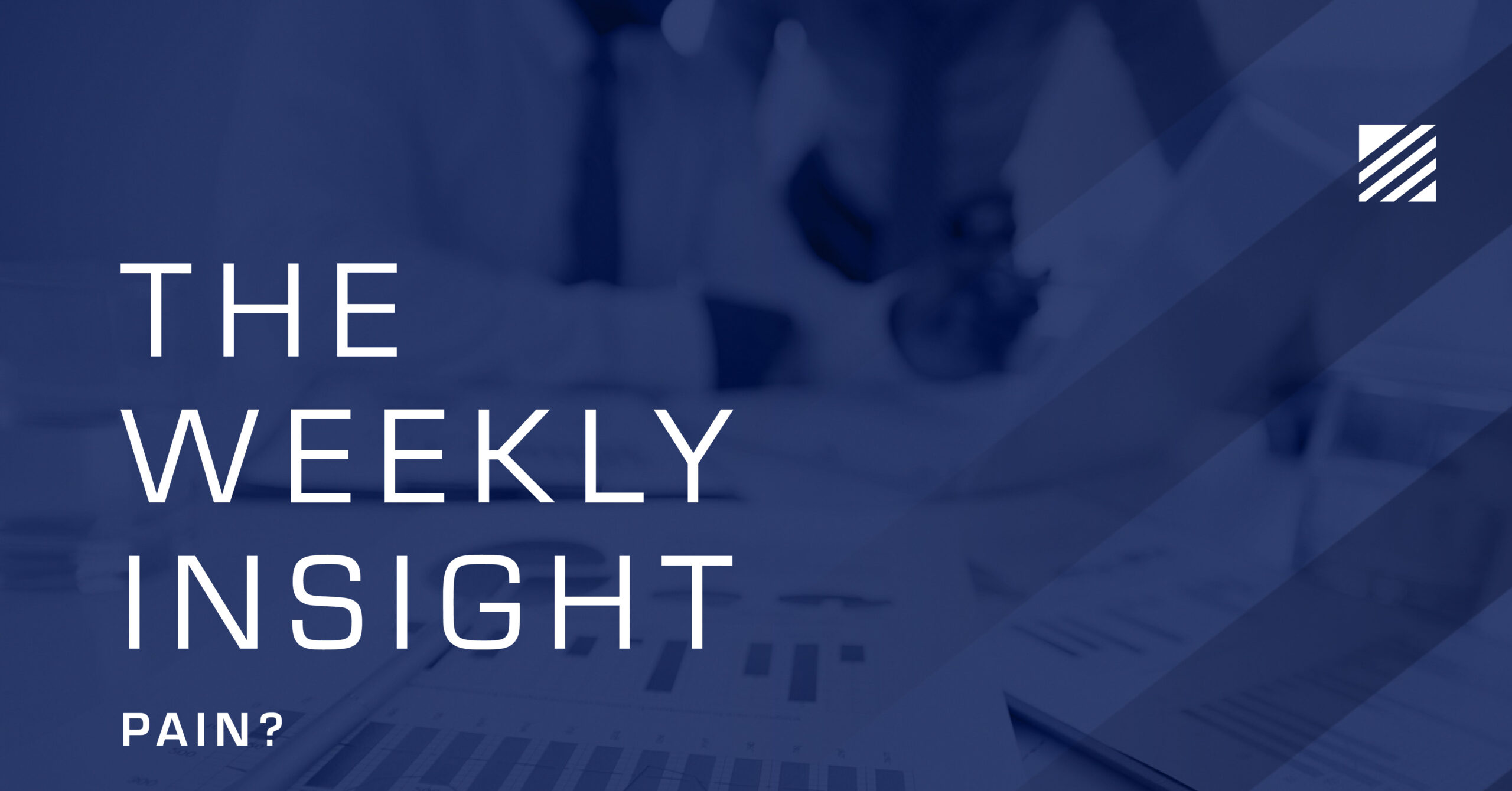 Regular readers of this memo will note that we’ve highlighted a theme the last few weeks: the end of summer would be a relatively calm period before we entered a more dramatic period at the end of August highlighted by three events: Fed Chairman Powell’s Jackson Hole speech on August 26th, August inflation data on September 13th, and the next FOMC interest rate policy decision on September 21st.

Well, we’re here. And Chairman Powell decided to kick this period off with a bang last Friday. As parents of young children, we recognize the tone of the Jackson Hole speech. He took the market to the woodshed in remarks that can best be described as “you may not like this, but we’re doing what’s best for you”. The second sentence of the speech was, “Today, my remarks will be shorter, my focus narrower, and my message more direct”. Sounds like a parent, doesn’t it?

A client last week remarked they wished Powell “would speak in plain English so we don’t have to parse every word he says to understand what he means”. His speech on Friday was as close to “plain English” as he has done for a long time. But a little parsing is still needed, so we are going to use this week’s memo to walk through what he said and how that should affect our assumptions going forward.

You may recall a memo we wrote back in June called “Circular Sentiment Firing Squad”. It was our response to the Fed’s first seventy-five basis point rate hike and our concern that market sentiment – not economic policy – was driving some of the Fed’s decisions. That 75-basis point hike came after Powell assured the world he would not hike that much, but also came after enormous pressure from the market to do so.

In that memo, we highlighted a conversation we had with a former Fed economist during the 2008 financial crisis. We paraphrased his comments – but it is important to remember them:

Chairman Powell’s remarks on Friday seemed particularly aimed at this idea. After weeks of the market getting comfortable with the idea that inflation is ebbing and the Fed might be able to back off, he came back with a resounding reminder that the Fed’s job is not to satiate the market. In fact, he spelled out in the second paragraph of his speech exactly what the Fed’s job is:

“The…overarching focus right now is to bring inflation back down to our 2 percent goal. Price stability is the responsibility of the Federal Reserve and serves as the bedrock of our economy. Without price stability the economy does not work for everyone”.

We have talked for some time about the excess amount of cash in the system and how most people can weather short-term inflation with their savings. That is still broadly true. But it is not true for everyone. In recent months we have seen a rollover for people who can least afford one. These people are Powell’s why. 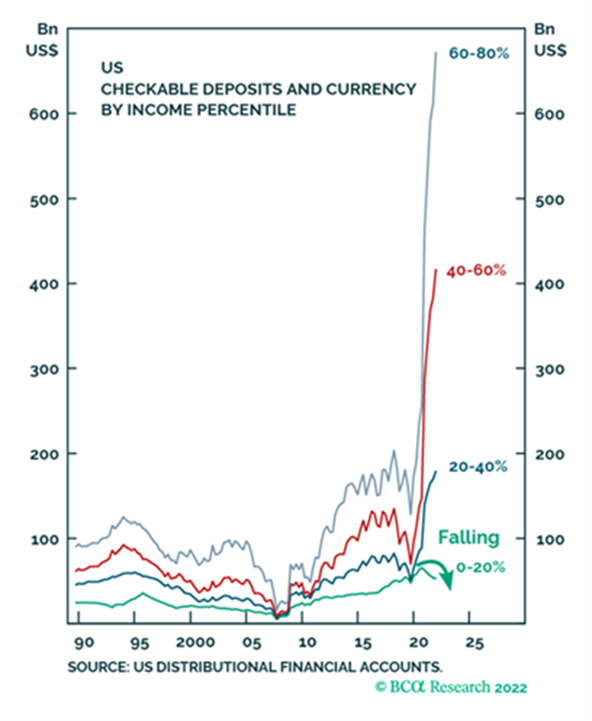 It was the third paragraph of Powell’s remarks which caused all the negative volatility on Friday. The language was stark:

“Reducing inflation is likely to require a sustained period of below trend growth”.

“There will very likely be some softening of labor market conditions”.

“…will also bring some pain to households and businesses”.

He closed the paragraph by reminding us that, while this process is not fun, a failure to do so “would mean far greater pain”.

The market heard one thing: Powell is going to nosedive us into a recession to stop inflation. But, as with all things, the answer always requires more nuance. Chairman Powell delivered that nuance over the next several paragraphs when he stated:

“The U.S. economy is clearly slowing…(but) in my view our economy continues to show strong underlying momentum”.

“The labor market is particularly strong”.

“While lower inflation readings for July are welcome, a single month’s improvement falls far short of what the Committee will need to see before we are confident that inflation is moving down”.

What he is saying is the economy is strong enough right now to handle the medicine. But if we let it get sicker – and must take more drastic action later – it will be much more painful.

Powell closed his remarks highlighting comments from earlier Fed Chairs about how to control inflation. He referenced some of the greats including Volcker, Greenspan, and Bernanke. The broad message? Inflation is a self-fulfilling prophesy. As Volcker said:

“Inflation feeds in part on itself, so part of the job of returning to a more stable and more productive economy must be to break the grip of inflationary expectations”.

Powell noted that those expectations have not sunk into the economy yet. This is highlighted by the University of Michigan survey which showed consumers expectations for inflation over the next 5-10 years have significantly moderated. 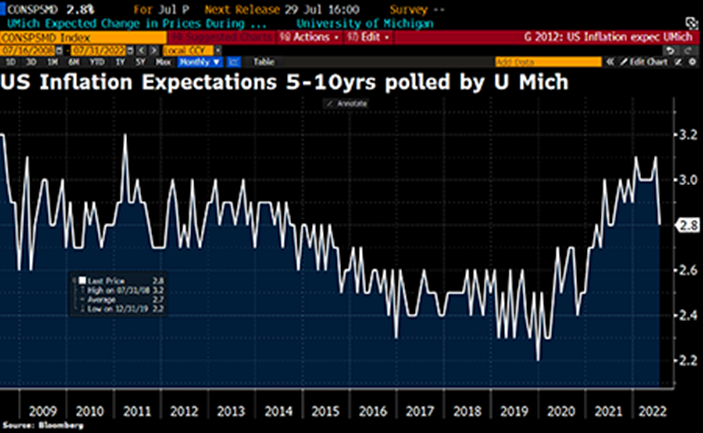 But Powell’s point is clear. If we let those expectations get out of hand, it will be that much harder to get them back in line. Now is the time to act – not when sentiment has shifted.

That brings us to Powell’s last point: we cannot stop battling inflation too soon. He highlighted Chairman Volcker’s successful battle against inflation, but pointed out that it came after 15 years of unsuccessful attempts to reign inflation in. Why? Expectations became anchored to high inflation. The result as a very painful recession to reset the playing field.

Therefore, we would argue there is nuance between “fixing inflation” and “crashing the economy”. Powell is clearly laying out that the economy is healthy enough to weather the battle against inflation. And he very pointedly did not change the Fed’s expectations of what are going to happen with rates over the coming months and years. He reiterated the Fed’s message (from June) that the expectation for the federal funds rate through 2023 was “slightly below 4 percent”.

The market was hoping for a pat on the back from Chairman Powell. They were hoping to hear the battle was over. Instead, he reminded them the fight goes on. But he did not say things are worse.

Now we wait for real data. Good inflation numbers on September 13th will be further confirmation that things are improving and hope that the Fed will not race to that “slightly below 4 percent” number. Bad data will have the reverse impact.

But none of it will matter until we see what the Fed is going to do on September 21st. In the meantime, we should expect some continued volatility as the market tries to read the tea leaves. That may just result in some good buying opportunities in the meantime.