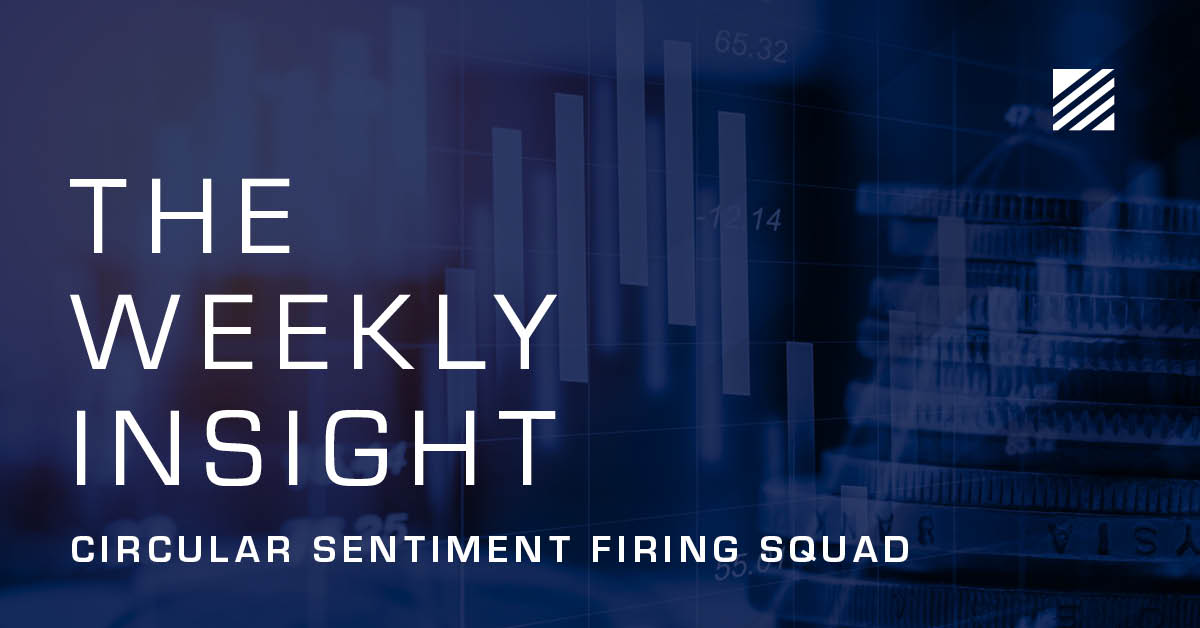 There is a phrase many parents have said to their children over the years: “You get what you get, and you don’t throw a fit.”

It’s a phrase the market would do well to listen too! In fact, we might change the phrase this week to “You got what you wanted, so why are you running around like the world is ending?!?!” (OK…it doesn’t rhyme…sorry.)

In all seriousness, last week was a very big – and very painful – week in the markets. Friday offered a little hope, but all U.S. indices were down hard for the week, and we now officially find ourselves in bear market territory. This week we’re going to address a few things: 1.) What happened this week to get us there; 2.) Why the Fed did what they did; 3.) What comes next (including an update on recessionary risks). Hang with us. This could be a long one!

Why the Fed Jumped to 75bps

Years ago, during the 2008 financial crisis, your author had an ongoing conversation with a former Fed economist. They were largely upset about the way the Fed was managing the crisis, but one comment has stood the test of time over the last 14 years. We’ll paraphrase here (it has been 14 years), but you’ll get the drift:

Never have those words been truer than over the last week. We’ll be the first to admit the inflation data that came out on Friday, June 10th was not good. Not good at all. But it was one print. And the Fed has forced a theme down our throat for nearly 40 years: they don’t look at headline inflation because they can’t control food and energy prices. All their decisions are based on core inflation.

Well, check out the dotted line on the chart below. That’s core inflation (after the last report!) doing exactly what Powell and the Fed have said they want. 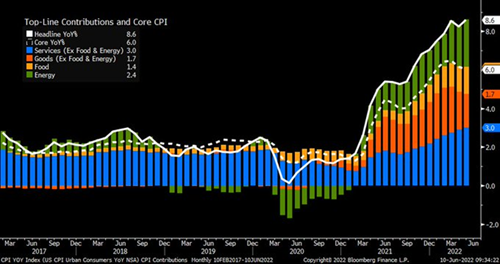 In fact, let’s look at Powell’s comments this week on the Fed’s baseline for inflation:

“We, of course, like all Central Banks do, look very carefully at core inflation because…it’s a much better predictor…of where inflation is going and it’s also more relevant to our tools. As I mentioned, the parts that don’t go into core are mostly outside the scope of our tools…”

Simply put: the Fed can’t control food and energy prices through their tools, so they don’t attempt to do so. Logically, it would follow that the chart above is pretty solid for Fed policy. What they’re doing is working – and they can’t control the parts that are rising. That would lead most to stick with the plan. And until last Monday, that was always the expectation.

You might recall us pointing out last week that the expectation for the rate move was largely unchanged in the day following the inflation data. That changed quickly on Monday morning. By the time the markets opened Monday the expectation of a 75-basis point rate increase had gone up from 6% to 85%. The market was sending a message. By Tuesday afternoon, Fed leakers were showing the message had been received by the board.

And then we get to Powell’s justification for the decision on Wednesday. Get ready to try to untie this one. It might be one of the more confusing quotes we’ve ever used in these pages.

“…all over the world you’re seeing these effects…and we’re seeing them here. Gas prices are (at) all-time highs…that’s not something we can do something about.”

Note that he’s making the point that Fed rate increases can’t do anything about energy prices and headline inflation! Now on to the next sentence:

Valid point. The average joe doesn’t care where inflation is hitting them. They just care that it’s hitting them at all. Next sentence:

“Core inflation is something we think about because it is a better predictor of future inflation.”

“But headline inflation is what people experience, they don’t know what core is. Why would they. They have no reason to.”

True. No argument there. Next sentence:

“So…expectations are very much at risk due to high headline inflation. So…the environment has become more difficult, clearly, in the last four or five months and hence the need for the policy actions that we took today.”

Please re-read the whole quote. Let it sink in. Because the decision the Fed made last week was not based on their core economic principles. It wasn’t based on the “better predictor of future inflation.”  It was based on “the public’s expectation.” It was based on how folks are feeling.

And on Wednesday the market loved it. They got what they were begging for – even if it was a short-sighted approach. The market was up strongly during Powell’s remarks and through the close of trading.

And Then Came Thursday…

We’ve all had buyer’s remorse before. Maybe it was that new car, or house, or maybe something much smaller and less expensive. You wake up the next day and think…ugh…I shouldn’t have done that. That feeling? That feeling was Thursday in the market.

As people slept on the idea of 75bps and Powell’s comments they started to fret. And they were particularly fretting about one idea: raising interest rates too quickly could lead to a recession! And by the time trading opened on Thursday morning we were in a full-blown recession panic.

Here’s the thing, though: did the economic condition of America or the world change between the close of the market on Wednesday and the open on Thursday? We don’t think so. Just a few days before Powell’s remarks, economists were polled regarding their perceptions on the timing of a recession. Just 2% thought we’d see one in 2022. 38% said early next year. Fully 60% thought a recession was at least a year away. 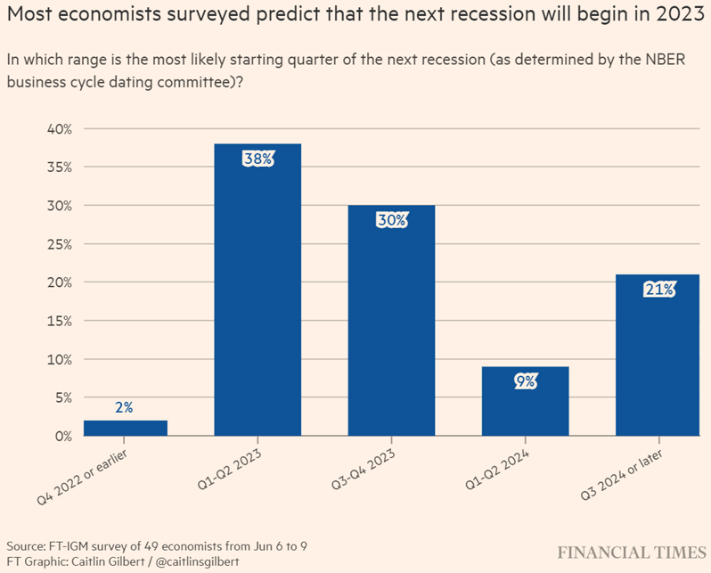 It’s probably likely Powell is slamming on the brakes too hard. We would have much preferred a 50bps hike and detailed conversation about why he believes core inflation is an accurate predictor of the future. But that was clearly too complicated.

But even if he is slamming on the brakes too hard, the idea that we’re going to go crashing into a recession in the next several weeks or months is incredibly unlikely. And the market is trading today at nearly 24% off its high. That’s remarkable because – in almost all cases shown on the chart below – the downturn from the high doesn’t start until the beginning of the recession (grey shaded areas on the chart). 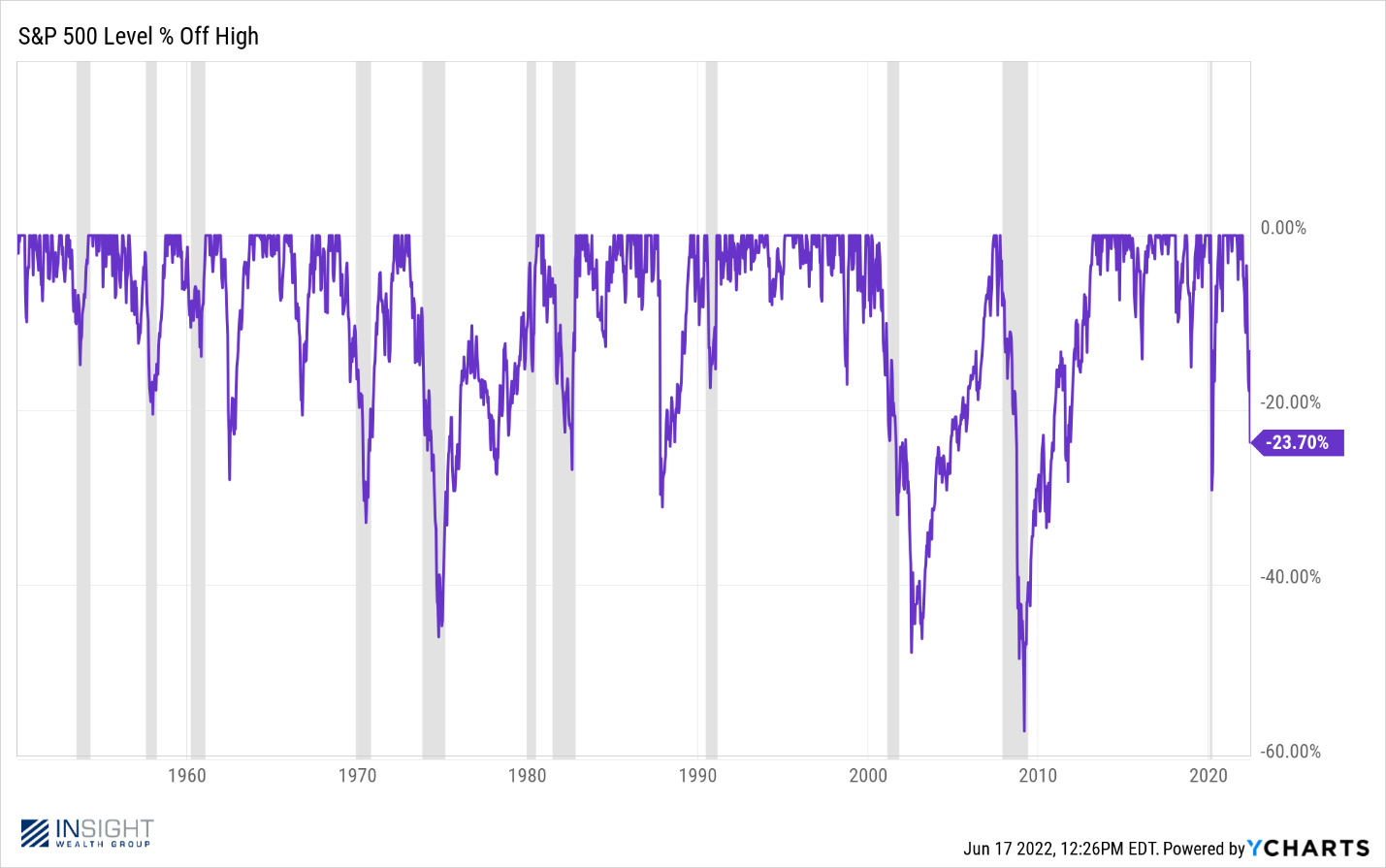 So…What Do We Do?

Do we run? Do we buy? What is the right answer today? That is a discussion we’ve been having at in our Investment Committee nearly every day since the most recent inflation report. Opinions are all over the board out in the market. We received one memo from an asset manager expounding on “Why I’m Selling Everything” and going to cash and commodities. Others are aggressive buyers in this environment.

That dislocation of consensus is, we believe, directly tied to the fact that sentiment – both at the Fed and in the market – has become dislocated from data. Sentiment is now linked to…sentiment. It’s a circular sentiment firing squad.

In the meantime, our portfolio performance has held up nicely. Models – including our all-equity Dividend Model – have taken considerably less downside capture than their benchmarks. That gives us some flexibility and the ability to be patient.

At this point, we have made the decision to stand pat in our allocations. We’re not aggressively buying – but we’re not selling either. We remain convinced this market is oversold but can’t with certainty say that sentiment will turn quickly. To quote a good friend: “Don’t worry about missing a couple percent on the bottom.” There will be plenty of time to participate in the recovery.

And so, we wait. What will turn the tide? Certainly, a good inflation print would help. But the earliest that could happen is July 13th when the next inflation data comes out. In the meantime, it’s a waiting game. Every piece of economic data is going to be over-analyzed as people look to read the economic tea leaves. There will be good days and there will be bad days. But if we can hold serve in the meantime – as we’ve done throughout this downturn – we’ll be in decent shape.