The Weekly Insight: Choose Your Own Adventure – Inflation! 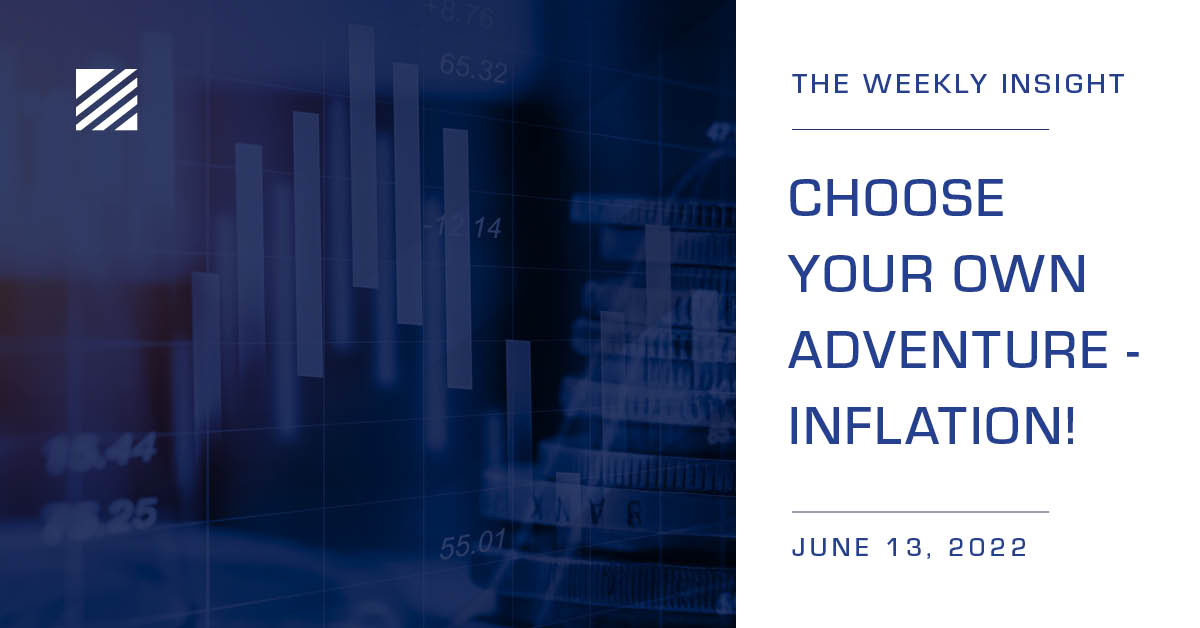 The Weekly Insight Podcast – Choose Your Own Adventure: Inflation!

Back in the 80s – when most of us at Insight were young pups – the world was changing quickly. Video game machines were starting to pop up in homes (Atari!). The music was revolutionary (we’re biased!). And it was a heady time of massive economic growth and global political gamesmanship.

And while all these exciting things were happening, those of us in grade school were also introduced to something we found fascinating: Choose Your Own Adventure Books. The concept was simple: you read a part of the story and are given two options (Prince marries Princess or Prince goes off to war, for example). As you choose your option it directs you to the next appropriate section of the book given your choice and the choice you make has consequences for the story. As we watched the inflation data come out on Friday morning, it sure felt like one of those crossroads we saw in the books.

Sadly, the world never gives us a perfectly gift-wrapped answer to what vexes us. It’s always more complicated than we’d wish. But the Department of Labor left us a present this week and with a little effort we’re going to unpack it for you so we can understand it a bit more than the headlines the media is offering. We need to understand it before the Fed meeting on Wednesday, because it will inform their decision making as well.

That it was. All items inflation (CPI) rose 1.0% month-over-month and 8.6% year-over-year. That’s not a pretty number and was well ahead of last month’s numbers (0.3% MoM; 8.3% YoY). The driver in all of this? It was undoubtedly the cost of energy. Last month the cost of energy fell and drove CPI below the March number. This month was the exact opposite. You can see from the chart below that energy prices – which are a relatively small proportion of what goes into inflation – had an outsized impact on the final number. 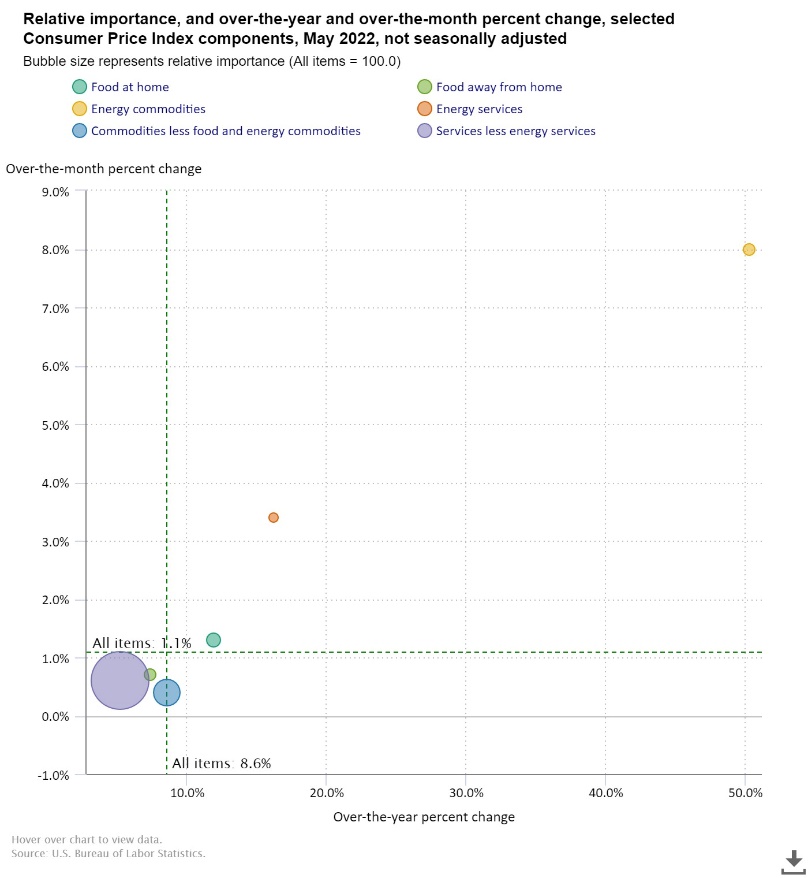 Which brings us to the “Choose Your Own Adventure” part of our memo. If, instead of being upset about the CPI data, you’re looking for some optimism, we have your answer. Core CPI. As you will recall from previous memos, Core CPI is the CPI number minus food and energy costs. This is the number the Federal Open Market Committee (FOMC) uses when making decisions on interest rates. Core CPI rose 0.6% month-over-month and 6.0% year-over-year which was slightly better than last month (0.6% MoM; 6.2% YoY). You can see below the impact of removing food and energy from the equation. 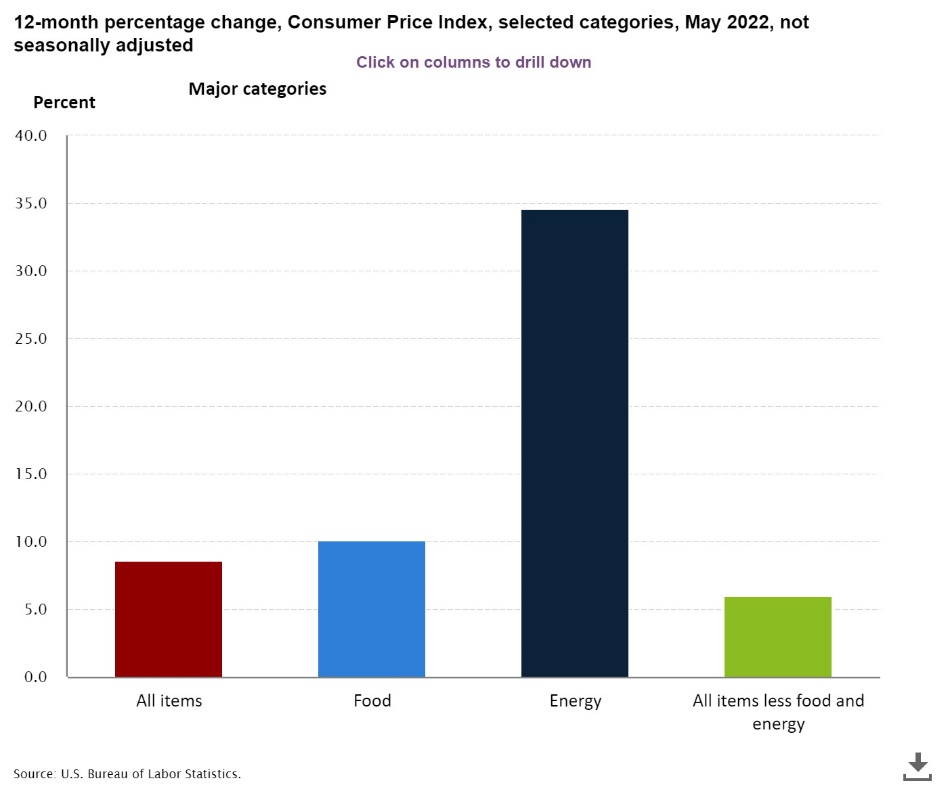 So, which one really matters? Was the report good news or bad news? And what will be the impact on the markets in the long-term (in the short-term it’s already been a nasty response with the market down nearly 3% on Friday)?

That’s where this conversation gets tough because there are no sure answers. We’ve been making the argument for several weeks now (since the last CPI report) that we believed inflation was peaking or, at worst, plateauing. Even with Friday’s less than ideal report, that argument is still valid in our opinion. Yes, CPI was up last month. But, as you can see, it has spent the last three months wobbling around the same level. And Core CPI flattened back in February and has been easing down since. 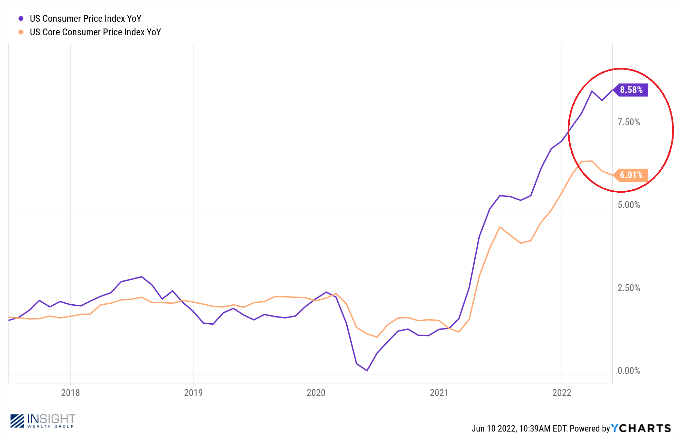 The real question, as it relates to the market, is what the Fed is going to do with this data next week. The FOMC is meeting on Tuesday and Wednesday and will come out with their next interest rate decision at 1:00PM CDT on Wednesday. Powell’s press conference, as usual, will be must-see TV in our offices.

The FOMC has been more clear than usual about their intended path over the next few months. The plan is to raise rates 0.50% this month and again in July. The market is counting on that being true and is putting a 94.7% probability on it. The latest CPI data barely put a dent in that, lowering the probability from the day before just 1.6%. 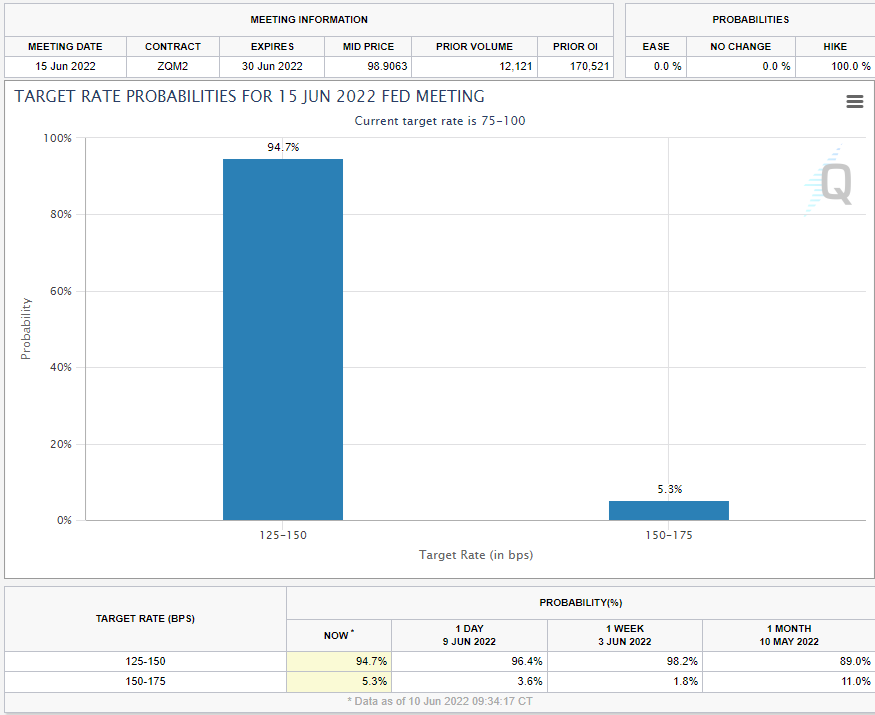 If the Fed changes course or significantly alters their forward guidance, we could be in for a rocky ride over the next few weeks. If they stay the course, it should instill some confidence in the market.

What This Means in the Real World

Discussing the market impact of this data is important to us and – we believe – our readers. But there’s a significant difference between the market impact and the real-world impact. And buried below the inflation data on Friday there is some meaty information that is not being talked about in the media.

Simply put, the people reading this aren’t the ones being impacted by the inflation we’re seeing today. Yes, it’s not fun when it costs $150 or more to fill up the SUV. But as a relative proportion of our readers’ wealth and/or income, it’s a relatively small price to pay.

Bluntly, the pandemic has been good for them. Their balance sheet has improved dramatically, driven by pandemic payments by the government and extremely cheap interest rates on debt. We’ve discussed many times in these pages how the average American’s financial position is in some of the best shape we’ve seen in generations.

That has led to people making choices. Maybe it meant retiring early. Maybe it meant a spouse staying home to be with the kids. Maybe it meant working less overtime or not taking that second job. All of these are quality of life decisions that we’re glad were possible. But they also had a significant impact on our labor market which in turn helped cause the inflation we see today. More consumers with more money to spend at a time when we had less workers to produce those goods and services.

In the end, the capitalism is a big weighing machine. When the scale gets out of whack, prices will rise (or fall) to meet that change. Equilibrium will eventually be found. We would argue the average American worker is starting to feel that equilibrium squeeze today. The data on compensation and job openings shows it. Total compensation growth has peaked, and job openings are starting to tail off. 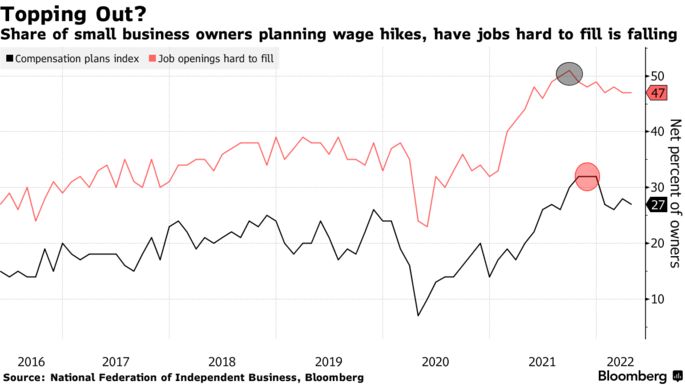 This solves for one of the Fed’s biggest concerns: a wage price spiral (businesses chasing labor by paying more and more and more for it). Simply put, people are having to go back to work to pay for the rising cost of goods. That’s good for our economy.

None of these items are going to be quickly resolved. It’s going to take time and patience. And every data set we get will be parsed in many ways to justify the opinion of the parser (yes, that certainly includes us). But capitalism is an amazing system that will eventually force equilibrium. We believe we’re starting to see that today.