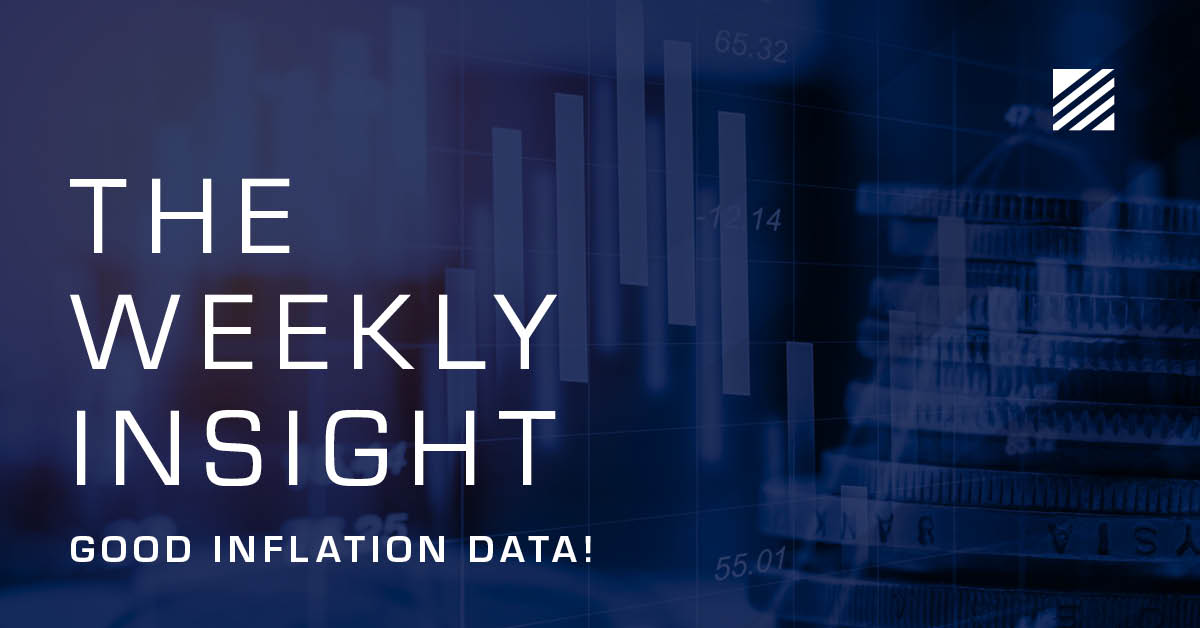 This most recent run on inflation has been a masterclass in the difference between public perception and economic policy. We’ve harped on it for months. And at times it has felt like we were screaming into the abyss. But after last week’s (very positive) inflation report, it seems like the world is starting to get on board.

But much like it was important not to get too down on the inflation data in recent months, we also need to be careful to not get too excited about this recent report that inflation is falling.  Things are never as good – or as bad – as we might believe they are.  So, this week we want to break down the inflation report to help you understand what it might mean for coming months.

On its face, Wednesday’s report was very positive and largely unexpected.  You may recall a chart we showed you a few weeks a go that showed economists were expecting the correction in inflation to begin in August. 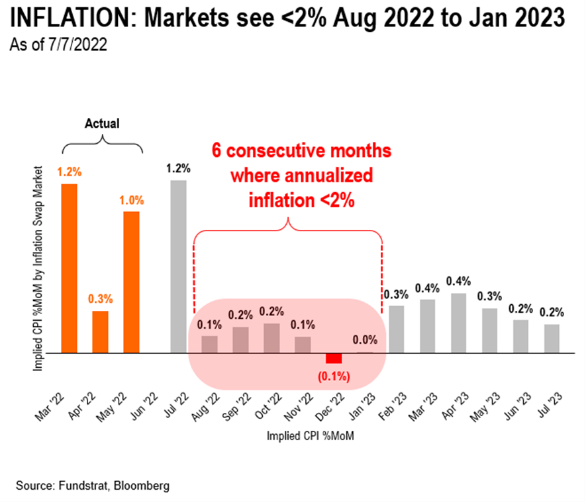 As you can see, the expectation for July was 1.2% month over month inflation in CPI.  The actual result for July? 0.00%. The cratering that was expected to start in August started a month early.

When you take that data and add in the fact that the year-over-year CPI number dropped from 9.1% to 8.5% and month-over-month Core CPI dropped from 0.7% to 0.3%, it was a very good inflation report.

There is another measure of inflation we haven’t discussed much in these pages. Where CPI is the consumer price index, there is also the producers price index (PPI). That measures the cost of inputs for the sellers of goods.

The PPI number came out on Friday, and it was…even better than the CPI. Month-over-month PPI was negative, coming in at -0.50% which was a significant drop from the 1% growth we saw in June. Given that PPI is a leading indicator of CPI, we’re hopeful that means more good news is coming in future months.

We wrote a memo back in June focused on the impact of energy prices on inflation.  You can read it here if you’d like a refresher. The question we were asking at the time was whether energy prices were falling rapidly enough to impact the June inflation data. The short answer was no – they didn’t.

But, as you can see from the chart below, the impact of falling energy prices did begin to hit the inflation data in July, even though energy costs have inflated significantly over the last year. 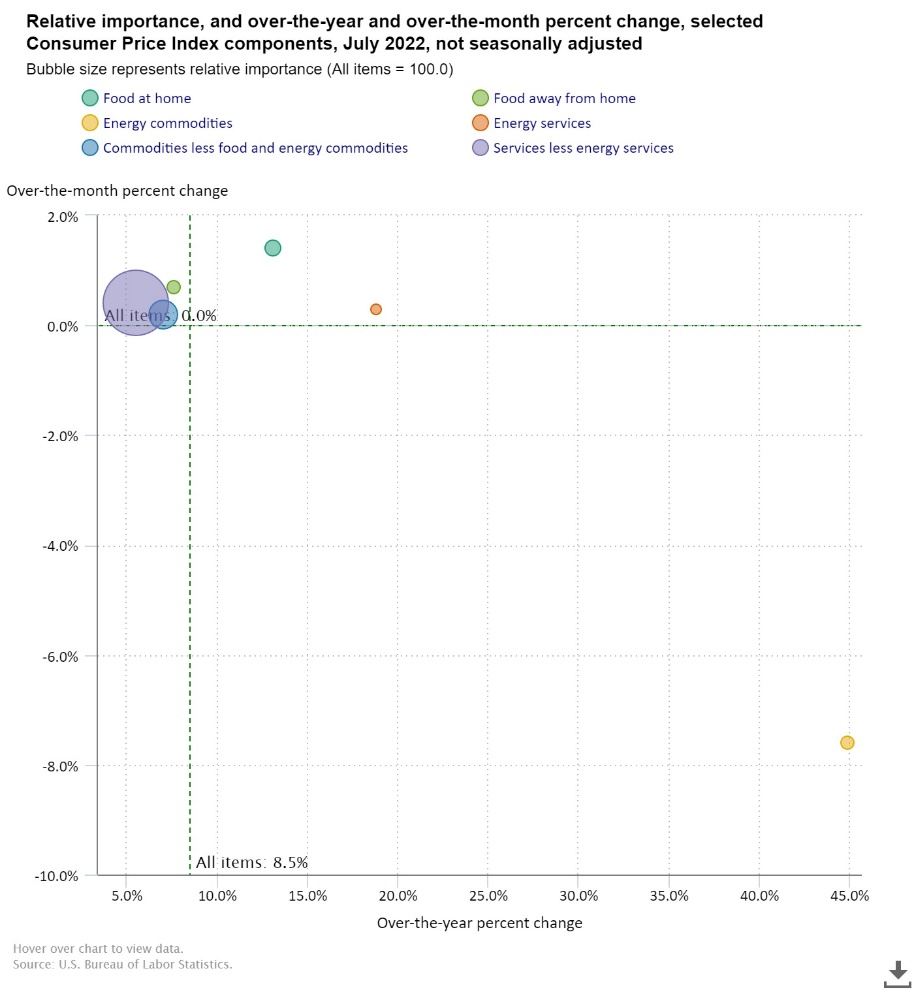 But what might be most notable is how little of the drop in gas prices the CPI data is considering for July.  Per the Department of Labor’s CPI report, they are showing a 7.7 drop in gasoline prices and a 7.6% drop in energy commodities overall in the month of July. 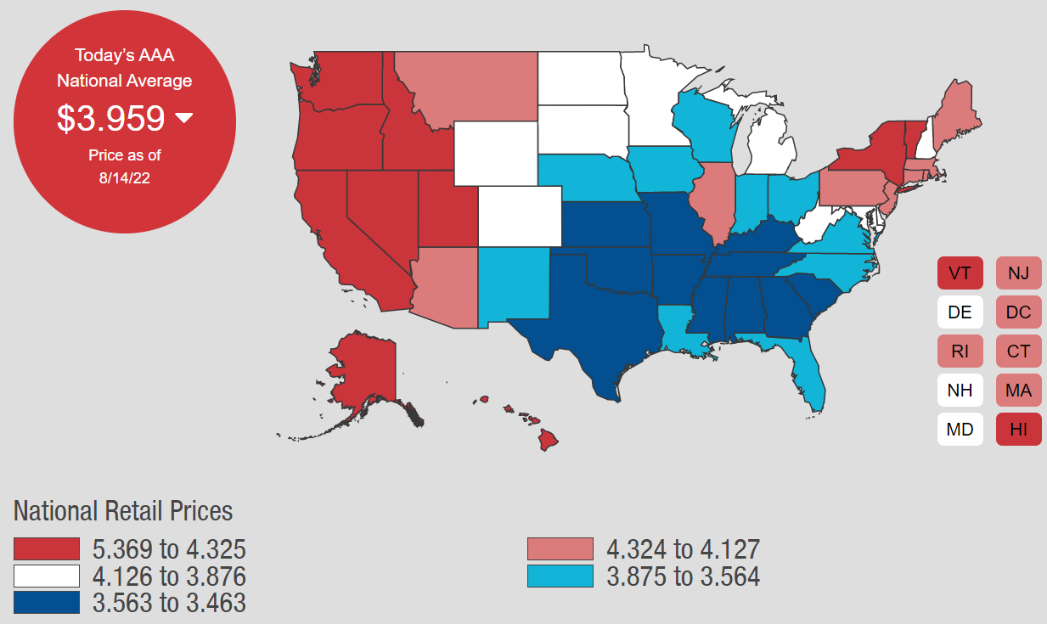 That is a 14% drop from what we saw 30 days ago ($4.61) and a 21% drop from the peak in mid-June. While we wouldn’t be surprised to see gasoline prices rise as we approach the Labor Day holiday, we shouldn’t expect energy prices to add to inflation when we see the August report early next month.

It should be no surprise the market reacted very favorably to the inflation data. All three major indices were up roughly 3% for the week. This is exactly the data the market has been waiting for. 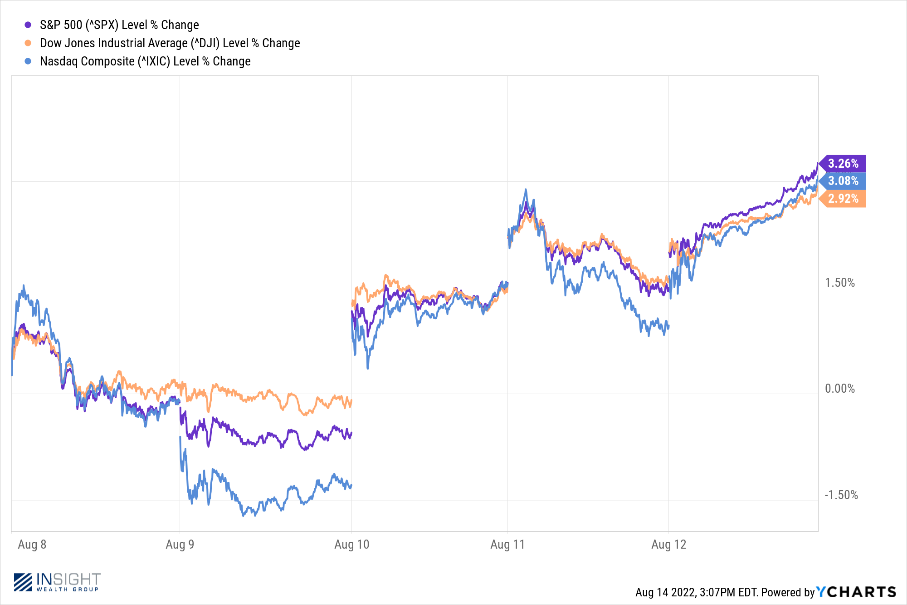 And so now we enter a period unlike any we’ve seen so far this year: there isn’t anything panic inducing on the horizon! We won’t get new inflation data for a month – and it should continue the positive trend. The Fed doesn’t meet until the end of September.  87% of companies have reported earnings already – and earnings growth is a solid 6.7%. And maybe best of all, Congress is on vacation for the next several weeks.

That’s no excuse to get lazy – and we certainly won’t on your behalf. But it seems investors can finally exhale before what will certainly be an exciting fall highlighted by the mid-term elections in November.