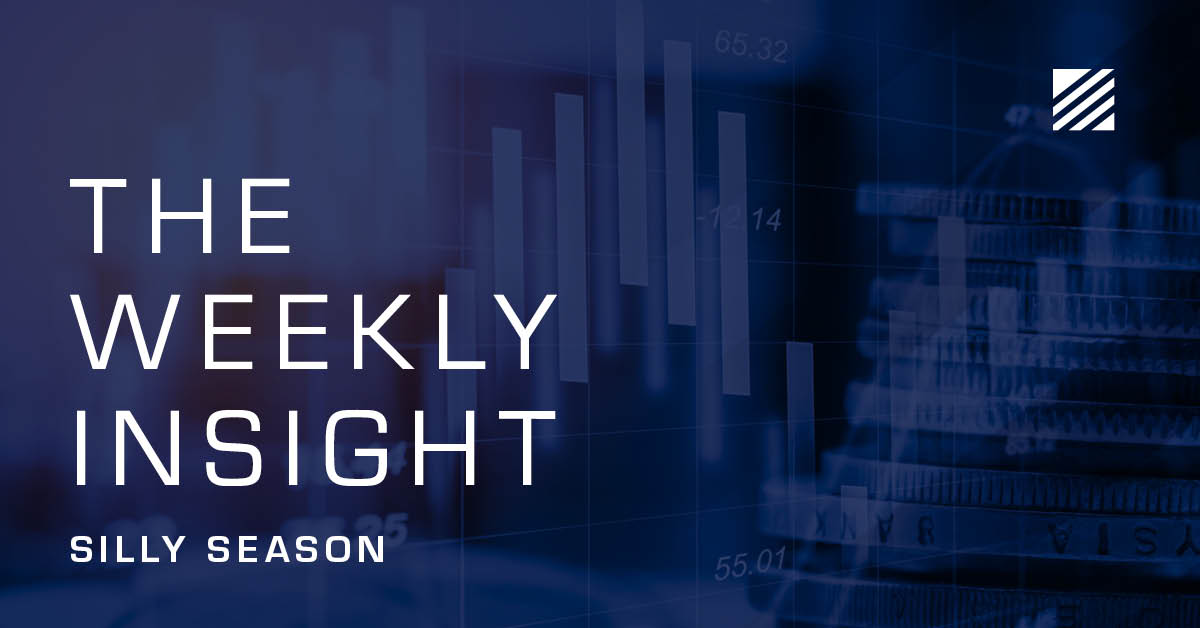 Inflation, Fed, Recession. Those three themes have dominated the markets since the Fed meeting in January and have dominated the commentary in these pages as well. But now, as we’re starting to see stabilizing (hopefully falling!) inflation and Fed policy that is fairly well defined (at least for the next two months!), things are seemingly settling down in the market. The S&P 500 is up nearly 8% over the last month and nearly 12% from its bottom in June. 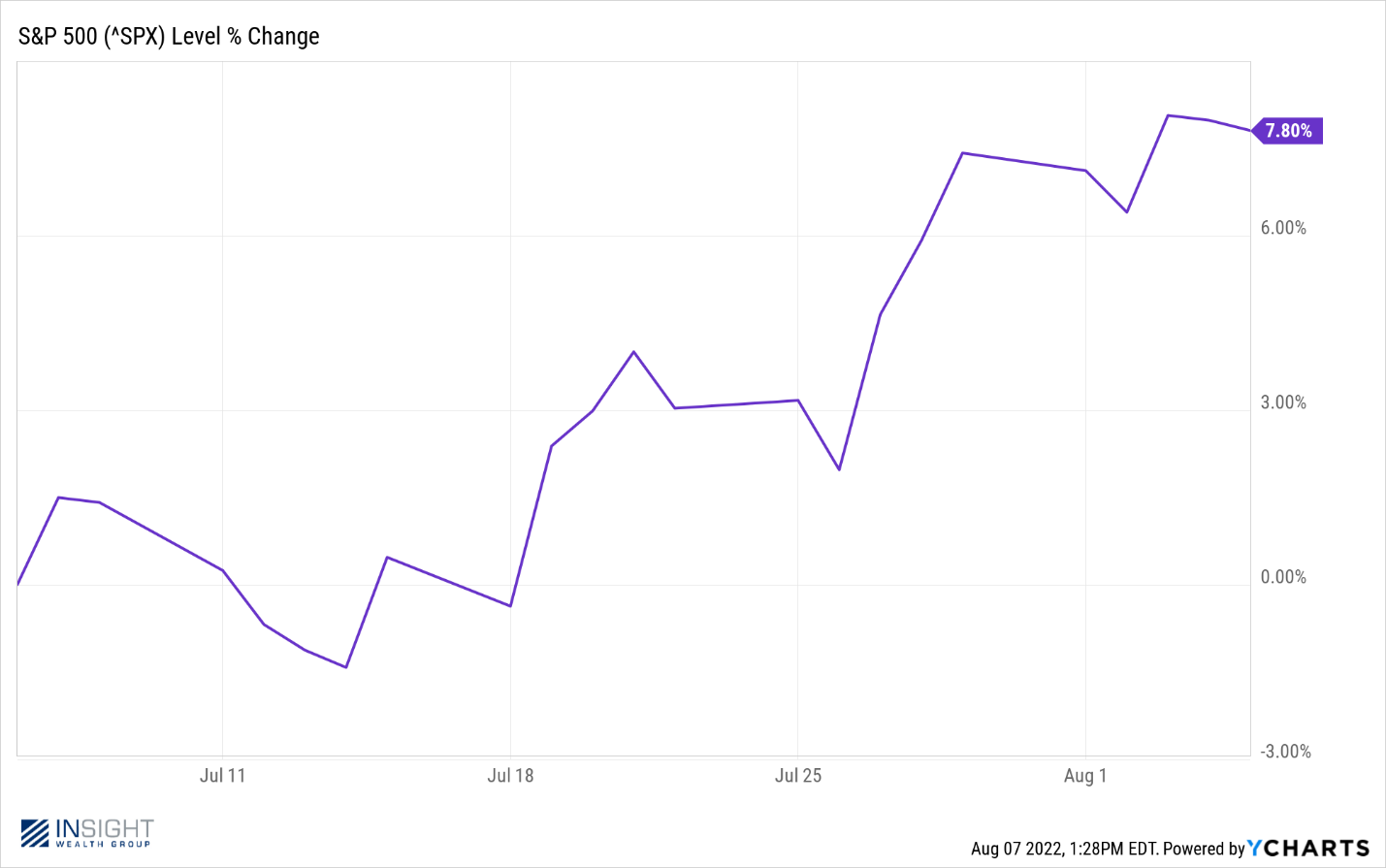 All of which means we have an opportunity this week to look ahead. Beyond inflation and Fed policy, what will be the drivers in the market between now and the end of the year? There is a lot we can’t predict – but there are two big issues on the horizon to which we should pay attention. One dominated the headlines this week: Taiwan. The other will be dominating headlines into the fall: election season. Let’s look at both.

The issue of U.S. and Chinese relations over Taiwan had not changed substantively for more than 40 years until recently. As with many issues of international relations today, the origin story of the People’s Republic of China/Taiwan/U.S.A. story begins with WWII. At the end of the war, there was a decision that there were four great powers in the World: The United States, Great Britain, the U.S.S.R, and China. Those four powers – along with France – would make up the permanent members of the U.N. Security Council and have veto power over any action the U.N. might take.

Just four years later, however, the leader of Republic of China – Chiang Kai-Shek – lost a civil war with Chairman Mao, forcing him and his allies to take refuge on the island of Taiwan. A stalemate has ensued since.

U.S. policy has fluctuated over time. In 1955, we signed a security agreement with Chiang promising to provide security assistance and support. And we refused to recognize the Peoples Republic of China – under Communist Rule – for the next 24 years. It wasn’t until 1979 – after years of work by Presidents Nixon, Ford, and Carter – that the U.S. formalized relations with the PRC. In doing so, we began the era of “strategic ambiguity” – a strategy where we remain particularly vague on exactly what we’ll do to protect Taiwan, while also calling for a “One Nation Solution” and providing literal boatloads of advanced western arms to the Taiwanese Government.

That vague policy has largely kept the peace for the last forty years. But in the last week there has been a particular flare up that began with Speaker Pelosi’s trip to Taiwan last week and ended with Chinese “missile tests” in the Straight of Taiwan over the weekend.

Nancy Pelosi’s trip was a planned response to an increasingly aggressive Beijing policy toward Taiwan. Current Chairman Xi has been very frank for years that he intends to oversee “reunification” of China and Taiwan – whether by choice or by force. And the frequent flyovers by Chinese military jets in recent months have certainly been provocations.

All of this comes amid the Russia/Ukraine conflict. It’s clear that Washington wants China to know we are not distracted by eastern Europe and intend to defend our ally. President Biden said as much when asked if the U.S. would defend Taiwan at a press conference in May. His quote: “Yes…that’s the commitment we made.”

So, what does this mean for markets? Hard to say at this point. It didn’t scare the market much last week (the S&P closed up 0.35% for the week), but any real conflict between the world’s two biggest economies would certainly give market makers pause. This isn’t a panic issue – but it bears watching in the coming weeks and months.

We’re starting to believe the Founders were playing a cruel joke on us when they locked us into elections every two years. While the ability to holder our leaders accountable at the ballot box is essential to maintaining our democracy, it’s unlikely the Founders realized just how long, arduous, and just plain annoying our elections would become.

Like it or not, the season is upon us. No clearer evidence could be found than the current “Inflation Reduction Act” being debated in Congress. This bill – the latest version of the “Build Back Better” bill proposed by President Biden over a year ago – is likely to pass given the support granted it by Senators Manchin and Sinema. They’ve been the lynchpins to nearly every piece of legislation the Democrats have passed in the last 18 months.

The bill is a fitting example because – despite its name – it will do extraordinarily little in the way of “Inflation Reduction.” Or at least little that the average American family will see. But they can now claim a win on major party priorities and say they’re fighting inflation. It’s a win/win.

Politics aside, there’s actually some good legislation in the bill. Allowing Medicare to negotiate drug prices is a no-brainer that politicians have botched for years. And the bill more than pays for itself, reducing the deficit by somewhere between $100 – $300 billion. But don’t let them fool you. It’s not an inflation bill. It’s an election bill.

You’ve heard from us prior to previous elections that the markets love one outcome more than others: divided government. The results back up that statement. Some of the best market performance in the last 120 years has happened when government control has been split – especially with a Democrat as President. 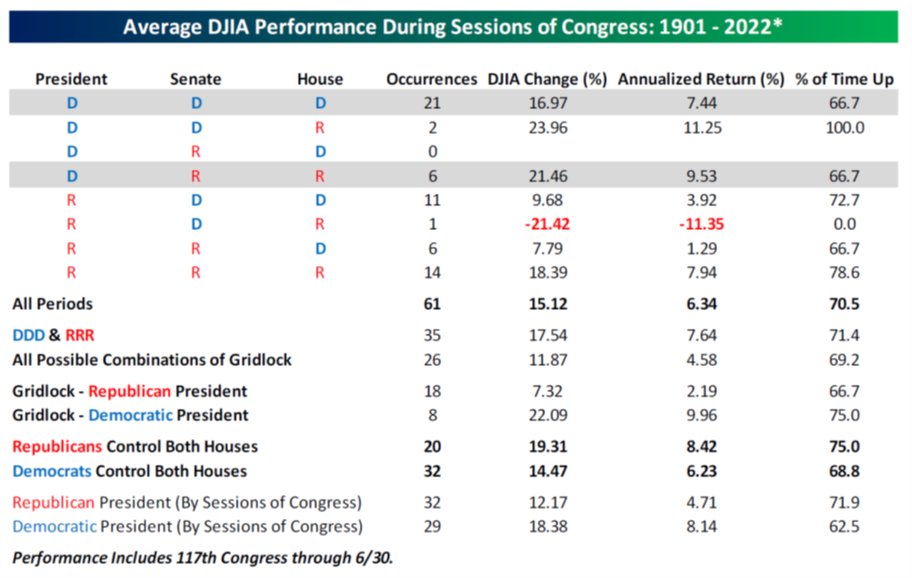 While it may seem like it, we do not have divided government today. Democrats control the White House and both houses of Congress, despite the razor thin margins. But any indication that there would be further division of power – and thus further gridlock – would be seen favorably by the market. And that’s exactly what we’re seeing today.

President Biden and the Democrats favorability has improved in recent weeks. And reduction in inflation in the next few months will be credited to him (he has, of course, paid the price for the inflation in the polls up to this point – even though it’s not really “his fault” – but that’s a longer column). Despite all of this, there is an exceedingly small likelihood the Democrats maintain control of both the House and the Senate. In fact, the Senate is a toss-up at best right now and (if the election was held today) the House is almost a certain loss.

Pollster Nate Silver breaks it down to a probability analysis. Out of one hundred chances, how many would have each potential outcome. Here’s what his data says:

The result – according to Silver – is there is an 80% chance we have divided government in January and only a 20% chance the Democrats would continue to control both the Executive and Legislative branches. That lines up with history. There have only been three examples since 1900 where the President’s party picked up seats in a midterm election. One was during the Great Depression (1938), one was during a war (2002), and one was just bad politics by the Republicans (Clinton impeachment in 1998). We’d go a step further: even if they do win both the House and Senate, it will be by such thin margins the result will be divided government no matter what.

That’s good news. Or, more importantly, it takes one potentially negative driver off the table for the market in a year that doesn’t need any more unwelcome news. If we can continue to see improvement in inflation and Taiwan/China doesn’t boil over, it’s another sign that the back half of this year should be positive. We’ve all earned it after the last few years.