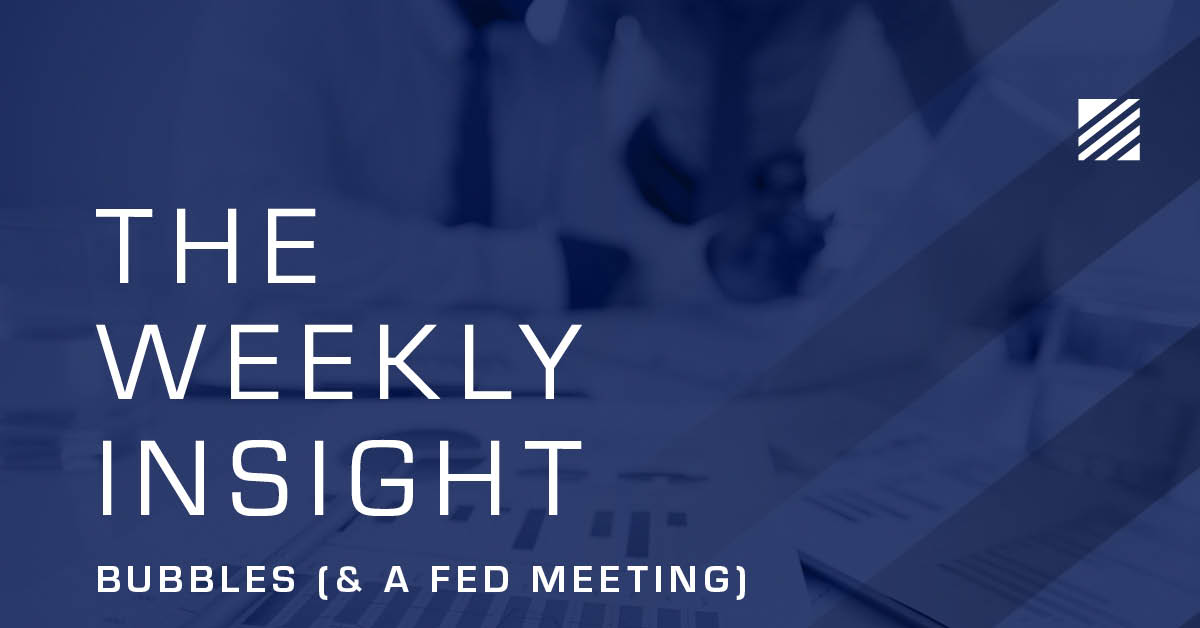 It’s been a good year for the market. No question about that. Despite all the stuff going on in the world, the economic recovery marches on and client accounts are participating well. Do you want to know a secret, though? For us, this kind of success is way more stressful than what we experience when things are not going well.

Why? We’re always looking over our shoulder. What is the hiccup that could bring things crashing down? Where are the risks we’re not seeing? What’s the next great bubble that’s going to wipe out value in investors’ accounts?

The problem with this kind of stress is the answers are often unknowable.  The next big problem will likely be one we’ve never seen before in our lifetimes.  Take, for example, the last three big crises in the stock market:

We once had a software at Insight which would take our current portfolio make-up and measure how it would perform in past crisis situations.  In a sense, it was a fun tool to use.  But it was also fairly useless.  Each of these include a specific “trigger” and their own series of underlying conditions which impacted the speed and depth of the crisis.  No future catastrophe is going to look just like a past one.

Which brings us to the current bubble we’re seeing out there right now.  The good news?  It’s a bubble that’s not in any of your portfolios at Insight.  But it’s one worth monitoring and understanding – because the way people invest is changing.  As such, we introduce to you the NFT:  Non-Fungible Tokens.

What is an NFT?  We’re still trying to understand this one as well.  But the best way we’ve seen to describe it is this way:  think of them as digital trading cards that trade on the blockchain.  Most trade on the Ethereum blockchain and are typically “digital art”.  They can be memes, or videos, or simple digital drawings.  For example, Twitter founder Jack Dorsey sold his very first tweet as an NFT.  One of the most valuable is this image below, known as CryptoPunk #7523.  It sold earlier this summer at Sotheby’s for $11.75 million. 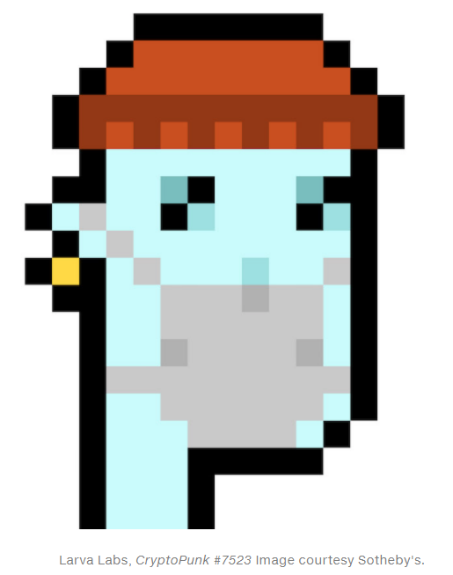 The reason for the value?  Of more than 10,000 CryptoPunks made, only 9 are so-called “aliens”, of which this is one.  Additionally, since it is wearing a mask, this was deemed to be the “COVID Alien”.

Rarity can denote value.  No question of that.  And if you consider this a form of art – which many do – the value of this art is subjective.  You may not find it valuable, but others do.  And that’s all that really matters.

But here’s where we get to the issue of a “bubble”.  Let’s be clear – we’re not smart enough when it comes to NFTs to tell you whether there is real value here.  And – as long as someone is willing to pay for it – it has value.  But there was a tweet we ran across this week which gave us pause.

This tweet relates to a series of NFTs called “Bored Apes”.  Last week, two Bored Ape NFTs brought in a combined $26 million at Sotheby’s.  And so, the frenzy begins.  A Twitter user (@SauceNFT) announced on Thursday he had received an offer on his Bored Ape. 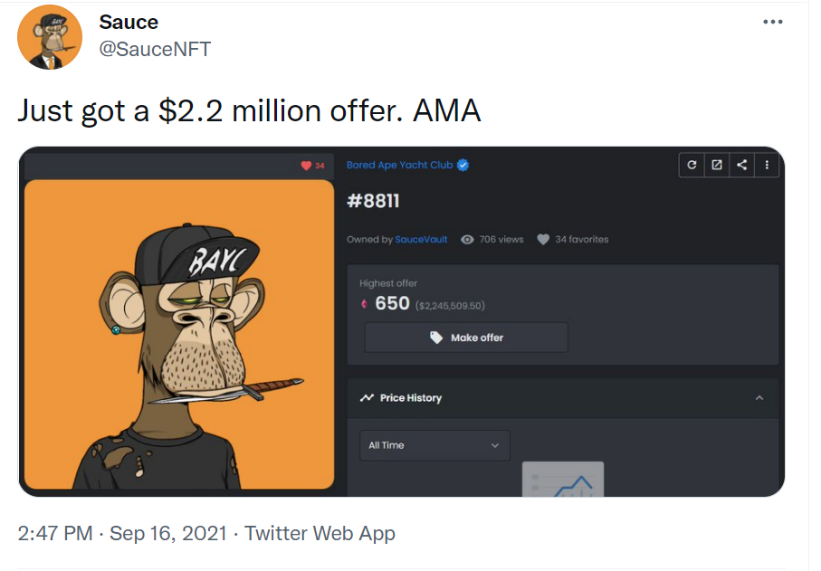 Later that evening, we got our answer from @SauceNFT:

We’re never going to be experts on NFTs.  And as easy as it would be to make light of @SauceNFT, one thing is clear:  there is money to be made in this space today.  But the lesson in this story applies just as well to the public markets as it does to NFTs:  don’t ever become too attached to an asset.

Looking at the Week Ahead

Last week was an uneventful – if positive – week in economic news.  New COVID case counts have flattened out and the CDC forecast model is showing a continued decline over the next four weeks.   Retail sales data for August came out last week and blew away expectations (+1.8% vs. consensus expectation of -0.1%).  And Core CPI (inflation) came in at 0.1% vs. an expectation of 0.3% – meaning the Fed may be right about transitory inflation.

Which leads us to this week.  There is only one story that matters (on the economic front): the FOMC meeting on Wednesday.  We’re going to find out what the Fed is doing on interest rate and bond purchases (likely unchanged…for now).  And, more importantly, we’re going to see if their expectations for the future have changed.

We’ve gone through this process many times before.  In June the Fed’s language really freaked out the market.  We said in our memo the following week (you can read it here) that we thought the reaction was overwrought.  The market’s performance since then would seem to prove us correct.

But that doesn’t mean there won’t be a lot of anxiety leading up the decision.  The question this month isn’t so much about interest rates as it is about when the Fed will begin tapering back their bond purchases.  Roughly half the members of the FOMC are in favor of starting to taper purchases.  Half are not.  Chairman Powell is going to have to thread the needle.

The expectation is the Fed will say they intend to start tapering later this year if – and it’s a big if – the economic recovery continues apace.

Simply put, we’ll know when you know.  But our trades this quarter to take some risk off the table in our core models put us in a fairly comfortable position.  We may see some volatility in the week ahead, but it won’t be a “bubble bursting” level of volatility.  We may not have the 336k% return of @SauceNFT.  But we’re also not going to see that type of correction in portfolios!

We’ll have a detailed explanation of the Fed’s meeting in our next memo.  Until then, we hope you have a great week!