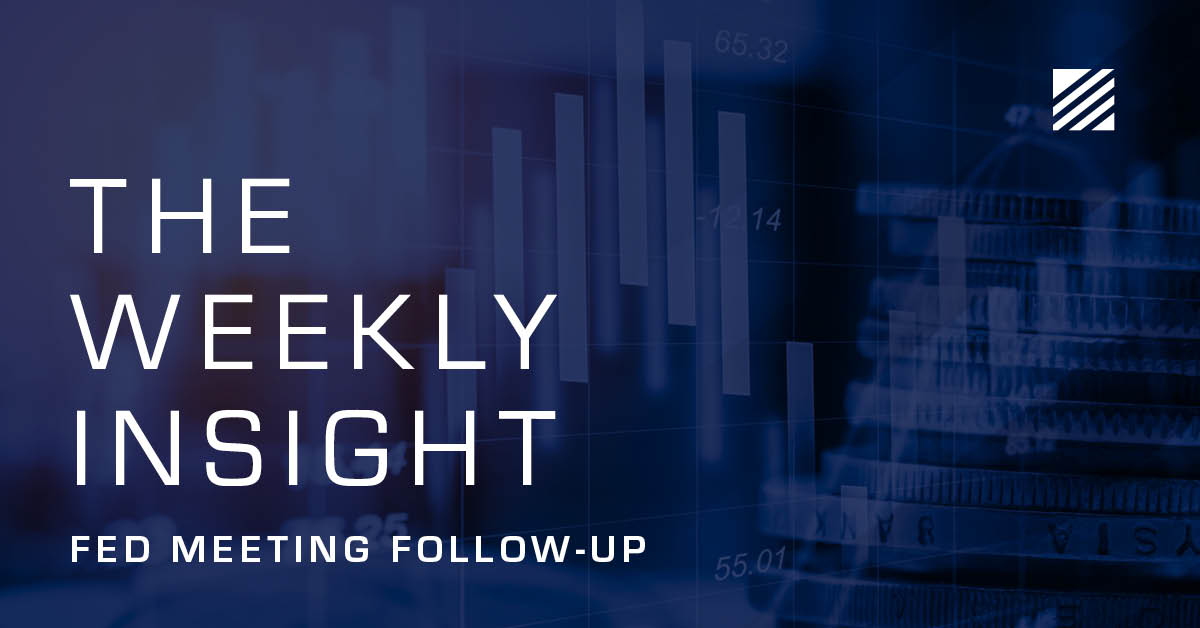 Those of you regularly reading The Weekly Insight might be getting a little tired of the “Interest Rate & Inflation” story. So are we!  But it continues to dominate the headlines and is, without a doubt, the biggest mover of the market today. Last week’s memo was focused on what the Federal Reserve might do in their monthly meeting last Wednesday. The results were not necessarily stunning, but they do deserve a recap. Plus, there was some interesting new data on inflation that came out last week which may show the beginnings of some easing. Let’s dig in.

What the Fed Said

First, let us address the panic some were having about the Fed “raising rates”.  As we stated in our memo last week, we just did not see it happening.  A rate hike would have been so far out of left field, it would have shocked the markets.  That is not something any monetary policy guru would want in this tenuous time of economic growth.

Simple answer:  they didn’t do it.  And, while some could argue there was a more “hawkish” message from the Fed this week, it was at best a baby hawk, still in its nest, unable to fly.

What was the “more hawkish” message?  It was two-fold:  an acknowledgement that inflation might be rising quicker than expected and a projection that rates may begin to increase sooner than expected.

We have talked about inflation as a driver for interest rates many times.  The Fed’s policy here is vitally important to the performance of the market.  Before we talk about what the Fed is saying, let’s do a quick refresher on how they intend to react.  As we have stated many times, the old policy was to try to “stop” inflation at exactly 2%.  In July they updated their plans, instead allowing inflation to “run hot” (i.e., exceed 2%) in a hope to back into an average inflation rate of 2%.

The Fed’s projections on interest rates are what got the market chirping (like a baby hawk?) on Wednesday.  The chart below tells the story why.  It is showing the votes of board members on their expected “appropriate range” of interest rates at the end of 2023. 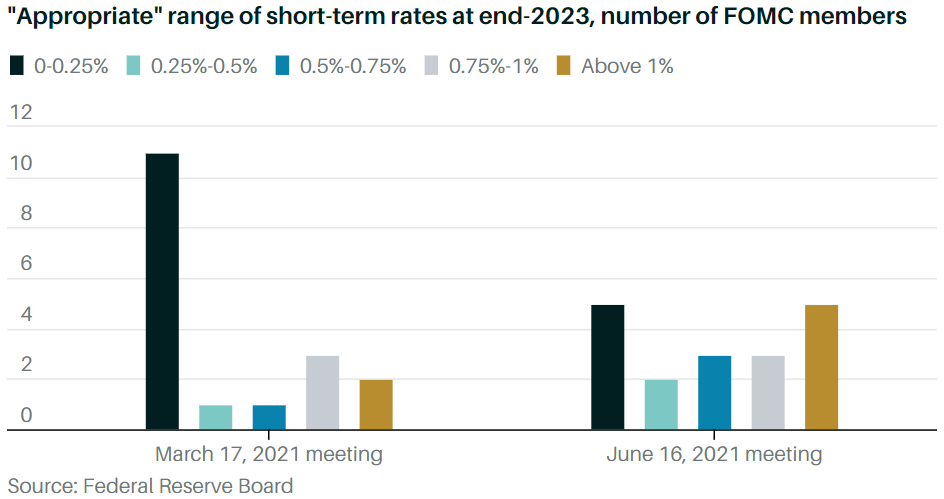 That seems like a dramatic shift, right?  And it is.  But let’s put it in a little bit of perspective.  First, this is the projection for rates 30 months from now.  That is a long, long time in a market that reacts to the news that is happening right now.

But while they are saying rates will probably have to increase in 2023 (the first time they have said this publicly), let’s look at where they are expecting rates to go.

All jokes aside, while this may be more “hawkish” than they were in March, it’s still pretty “dovish” as far as we are concerned.  Especially when they stated they intend to continue buying bonds in the marketplace as well.

You have heard us say it over and over again:  we do not have a crystal ball.  But while there is no way to predict the future, we have also said that one of the key tenants to success in 2021 was the Fed keeping interest rates low.  That pillar in our strategy remains intact after Wednesday’s meeting.

We have been strongly on the “transitory inflation” bandwagon for a while now.  The reason is simple:  we have always had a strong belief in the power of supply and demand.  Yes, the public has more cash and more spending power today than they have had in some time.  Pent up demand from being stuck in their homes, combined with “free money” from Washington was always going to cause a boom in spending when the market opened back up. Combine that with a wounded supply chain and you have a recipe for inflation…in the short-term.

But the cash will not last forever.  And people will not be willing to pay higher and higher prices for goods they may want, but do not necessarily need.

We have focused this conversation in the last few weeks on automobiles and housing, both of which have seen supply chain issues (semiconductors for new automobiles and lumber for housing) and rising demand.  We saw a couple of pieces of data this week that may indicate a slowing in both.

Manheim is a group that tracks vehicle sales and provides data to dealerships so they can remain competitive.  Some of the data they have is shocking.  For instance, look at this chart on the change in prices for automobiles in the last 12 months. 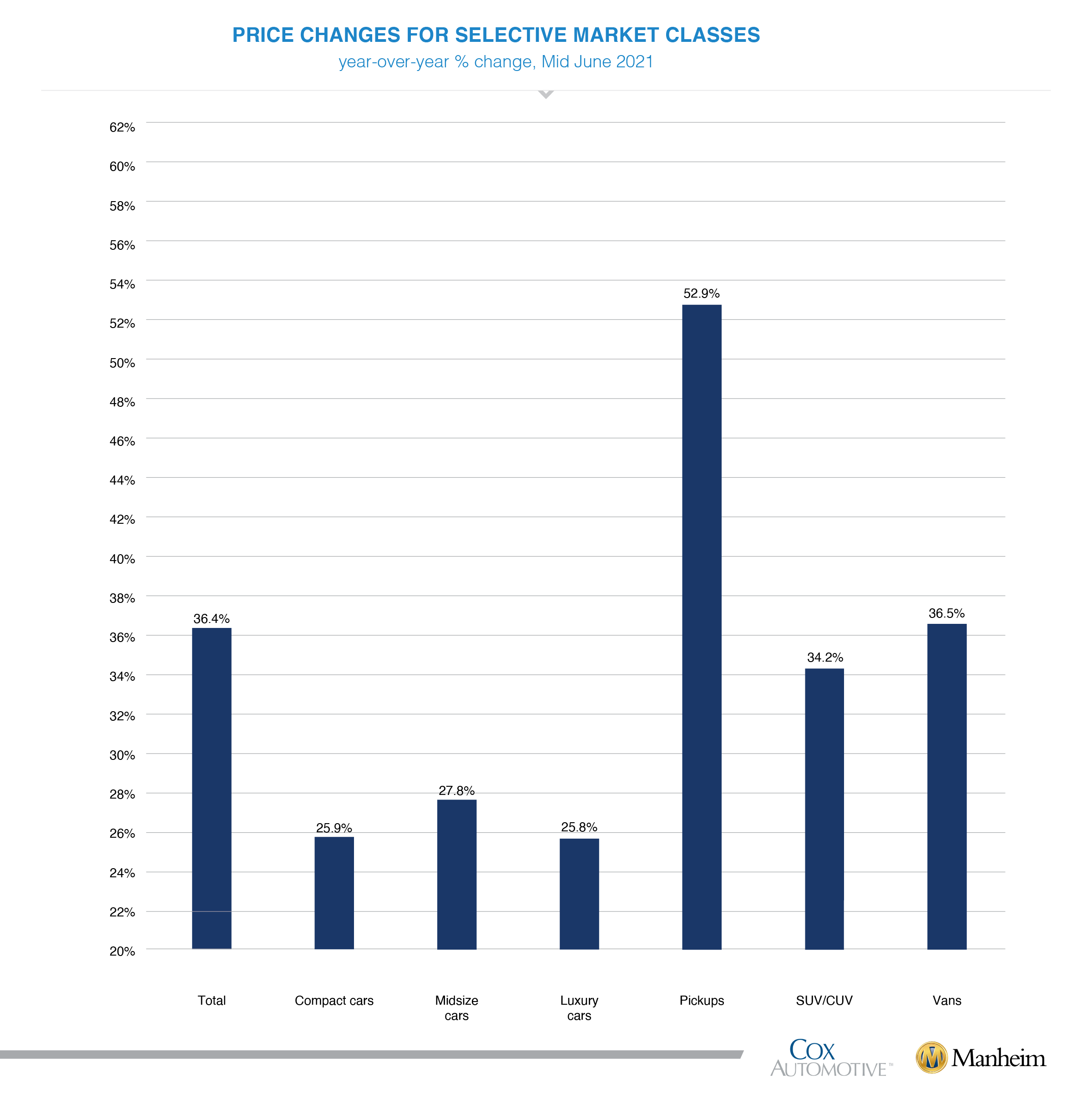 Americans love their pickups!  But what is more important to this conversation is what is happening to prices right now – not over the last year. 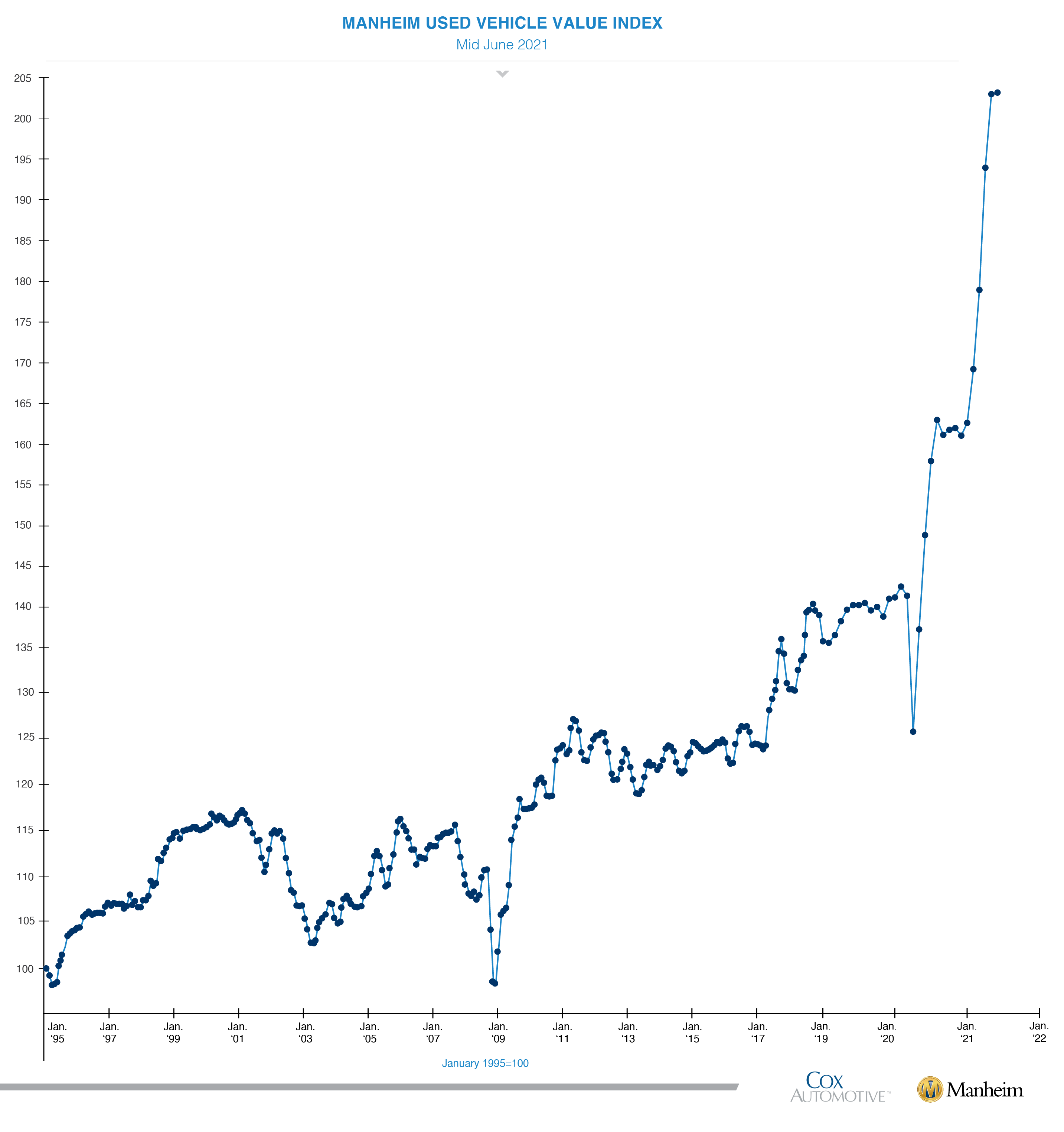 If you squint very, very hard, you can see the last data point at the top right of the line.  Look at where it is next to the previous data point.  It largely did not move.  For the first time since early this year, used vehicle values did not go up substantively.  Per Manheim, it was the lowest weekly increase in 20 weeks.  Manheim made a bold statement in their weekly report last Monday:

The home buying and home building markets have been just as hot as autos.  According to the National Association of Realtors, the median U.S. existing-home price shot up 19% in the twelve months ended in April.  And, while prices have not yet started to retreat (like autos), we are seeing a new piece of data that is healthy:  the number of homes on the market is starting to rise.  The number of U.S. homes for sale climbed 6.7% in early June from the same weekly period in May.  That is the biggest increase since Covid-19 lockdowns started in 2020.

Why?  Supply and demand wins the day again.  Sellers are realizing it is time to pounce on these prices and are starting to list homes.  But more homes on the market will mean more competition for buyers and a slowdown in the price explosion.  As Ralph McLaughlin, chief economist at Haus, said in an article from Financial Advisor Magazine this week: “The same force leading to new supply may be the same force that reduces the ability of homebuyers to keep interesting in buying a home…mainly rising prices.”

What does all this mean?  We are going to be on this rollercoaster for a while.  But the basic tenants of our philosophy for 2020 remain intact.  While the market took a little bump last week, we remain optimistic about the back half of 2020.