The Weekly Insight: Not So (Ever)grande 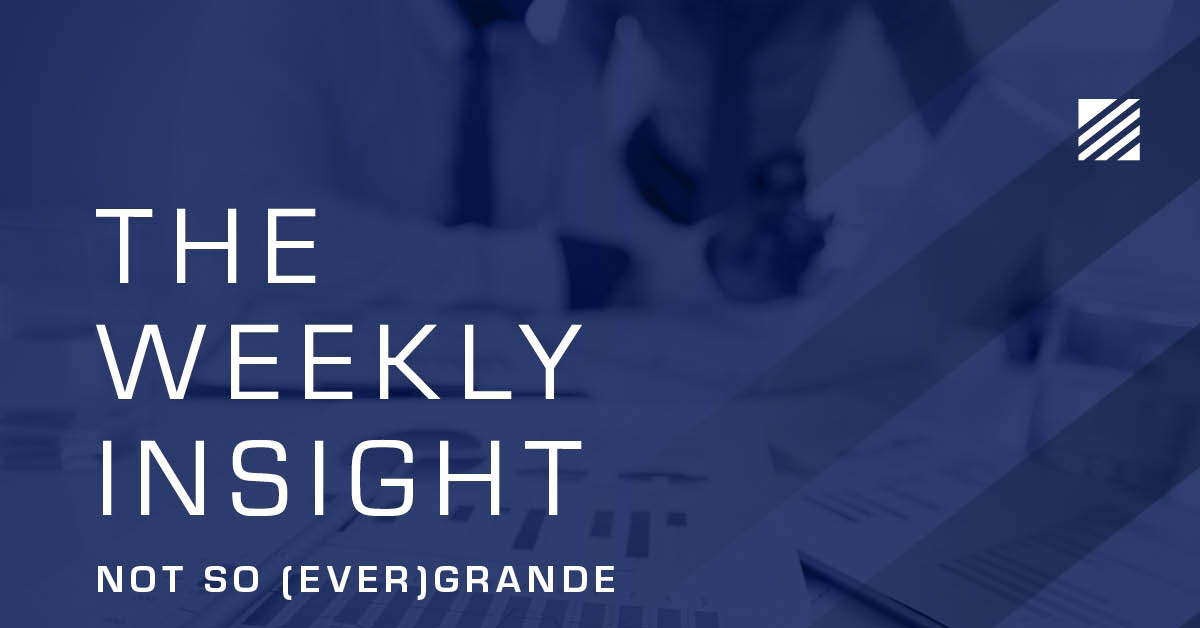 This business is filled with axioms. “Sell in May and go away.” “Be greedy when others are fearful…”. You’ve heard us steal a lot of them over the years. And you’ve also heard us mock a lot of them. But there is one – for us – that always seems to be true: “There’s no good news on Sunday night.” Actually, we’re not sure we’ve ever heard anyone else say that before. We probably made it up! But it sure seems to be true. We can think of many examples over the years.

There was Sunday, September 28, 2008, when the “rescue package” for the Great Financial Crisis fell through. Markets were off 7% on Monday. Or Sunday, February 23, 2020, when all it was announced COVID had started to spread in South Korea. The markets were off 3.5% on Monday. Or then there was two weeks later, on Sunday March 8, 2020, when everything in the U.S. started to shut down (14 days to control the spread!). The market was off nearly 8% on Monday.

So, we have a little bit of Sunday Night PTSD. We hate it when our Wall Street Journal alerts start going off after we send the kids to bed. It’s not usually a good sign.

Which brings us to last Sunday night. The alerts started to happen: “Evergrande is collapsing.” “It could be a worldwide financial contagion.”

Here we go again. Combine this with a week in which we’re supposed to hear from the Federal Reserve, and it seemed like a recipe for disaster. But then the week played out and…meh. Not much to show for it. This week we’re going to break down the big plays of the week and help you understand what they meant and how they may impact you going forward.

We’re willing to guess most of you had never heard of Evergrande before Monday.  We didn’t know much about it either.  As big as it is, it doesn’t trade on U.S. markets and, unless you own their debt, there is very little reason you would have ever run across them.

The problem on Sunday night was they had roughly $84 million in debt payments due on Thursday and it was expected they would be unable to provide payment.  (It hasn’t yet been confirmed if this payment was missed, but it is believed it likely was.)  They also have presold more than 1.4 million apartments (valued at $200 billion) which they have not yet completed.  So, you can start to understand the cascading effect of this situation.  If they don’t make their debt payments and go out of business, 1.4 million Chinese homebuyers are out of luck on projects that will never get to the finish line.

As our friends at Taiber Kosmala and Associates pointed out in a newsletter this week, this comes at a time when Chinese real estate speculation has reached rather lofty levels.  For example, the average apartment in New York City is priced at roughly 25x the average resident’s income (still a ridiculous number…but that’s for another memo).  In China that number is 40x.  So, a Chinese homeowner would have to pay 100% of their wages on their home (not including borrowing costs, repairs, food, clothing, etc.) every single year for 40 years to pay off the home.

But China is still China.  The free market – while allowed some leeway – is not the ultimate deciding factor.  The Chinese Communist Party is.  And they are not going to allow this to turn into a political crisis.  It is clear from their messaging this week that a “soft landing” will be the preferred approach.  Other developers will be brought in to clean up the mess.  And a housing crisis will not be allowed.

But that just applies to the situation inside China’s borders.  Its government is not going to do a thing for the foreign lenders of Evergrande.  As far as the CCP is concerned, that’s their fault.  (They like the free market when it helps them!).  Here’s the bottom line:  there is no doubt some U.S. institutions will feel this hit.  But it isn’t enough to cause a banking crisis like we saw in 2008.  As you can see from the chart below, CitiGroup has the largest exposure with roughly 3.2% of its assets in CitiGroup China and CitiGroup Hong Kong (note this isn’t 3.2% of all CitiGroup’s assets).  When it comes to total bank assets, Goldman Sachs is the worst hit at 1.5%.  That will hit the balance sheet – but it’s not going to crumble a U.S. bank. 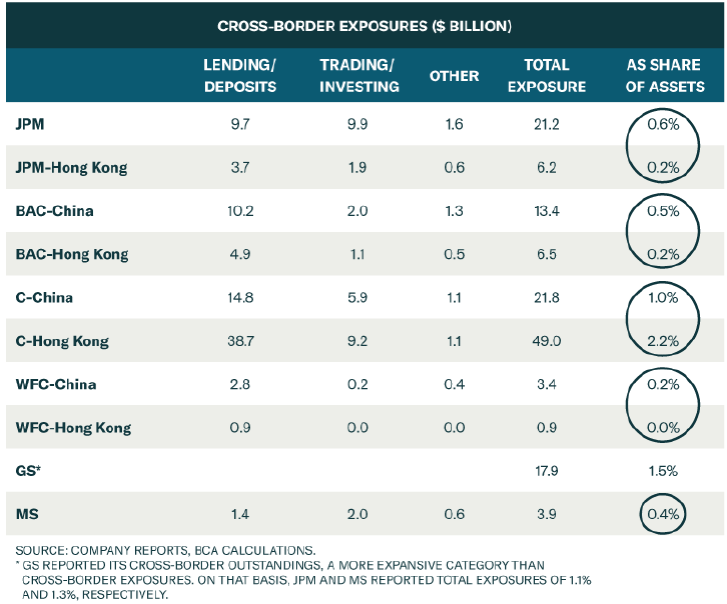 So, what is the message to investors?  While this isn’t a crisis, it’s another good wake up call.  There are still (and always will be) actors in the world making stupid decisions and we need to do the best we can to manage that risk.  The impact to U.S. markets should be limited, but those in emerging markets are going to feel this one for a bit.

You may recall that we sold our emerging markets position in our core portfolios last month.  While we had no idea the Evergrande news was coming, our reasoning was the weakening situation in China.  That’s proven to be a good decision in this environment as that position is down substantially month to date. 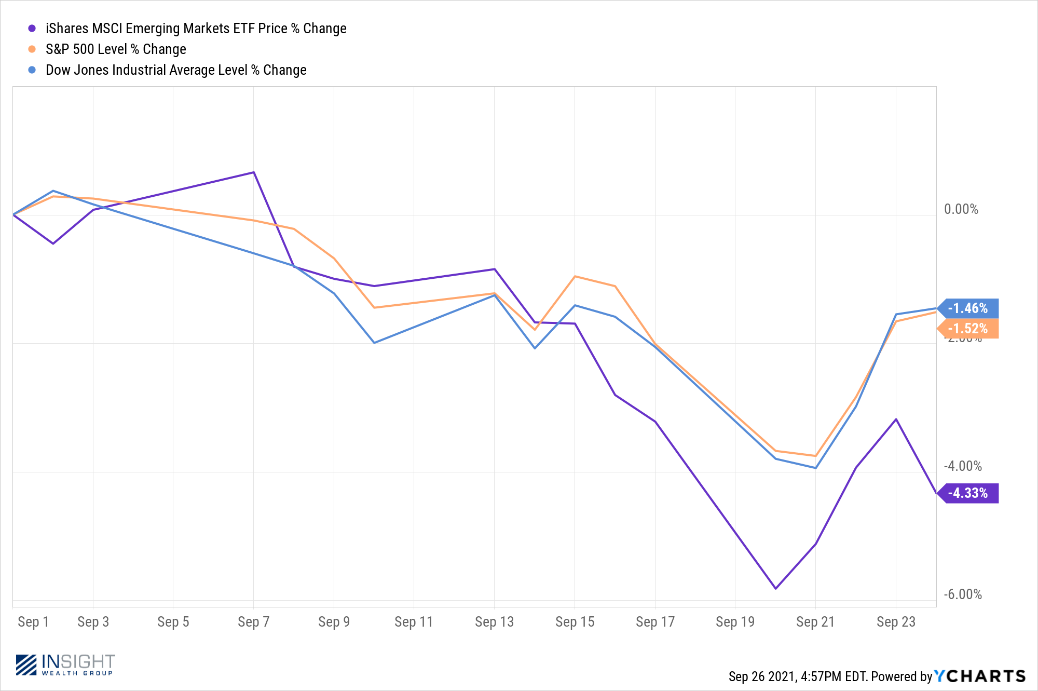 We spent much of our memo last week laying the groundwork for the Fed’s meeting and release of minutes on Wednesday.  Given the start to the week, it could have really ramped up the drama in the markets.  The two issues at hand:  when will the Fed raise rates and when will they begin to “taper” their bond purchases?

The end result?  Meh.  Not much happened.  But they did set the table for the future.

Notice the distinction:  the Committee wanted “substantial further progress”.  So far, have “made progress”.  Things are getting there – but we’re not there yet.

The next statement sets the table, however, for future tapering:

If progress continues broadly as expected, the Committee judges that a moderation in the pace of asset purchases may soon be warranted (emphasis again added).

Tapering is coming, but it’s not here yet.  Our best guess is we’ll see tapering start at their next big meeting in December.  The market’s expectation is they will reduce their purchases by roughly $10 billion per month for 12 months.  Thus, it will take a full year to get to zero. 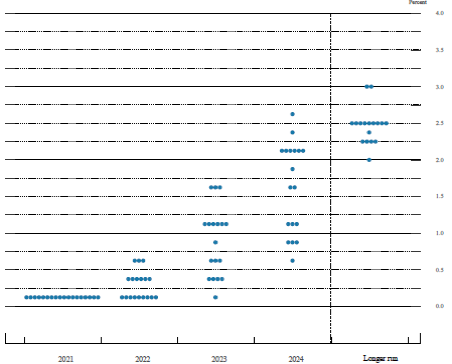 Right now, the FOMC is split down the middle.  Half the Committee thinks there will be no rate increases in 2022.  Half think there will be one or two increases.  The market right now is betting on one – late in the year – to correspond with the end of tapering.

In the end, not much has changed.  When thinking about interest rate policy and its impact on equity markets, this puts us in line for an optimistic outlook for the next 6-12 months.  But the Fed will continue to be one of the biggest drivers of equity volatility.  And we’ll have to continue to watch their messaging closely.

And so, as we write this at 4:30PM on a Sunday, the wait for the Sunday night headlines begins again.  The last one didn’t amount to much.  We’d take that for this week as well.