The Weekly Insight: Back to the Brink 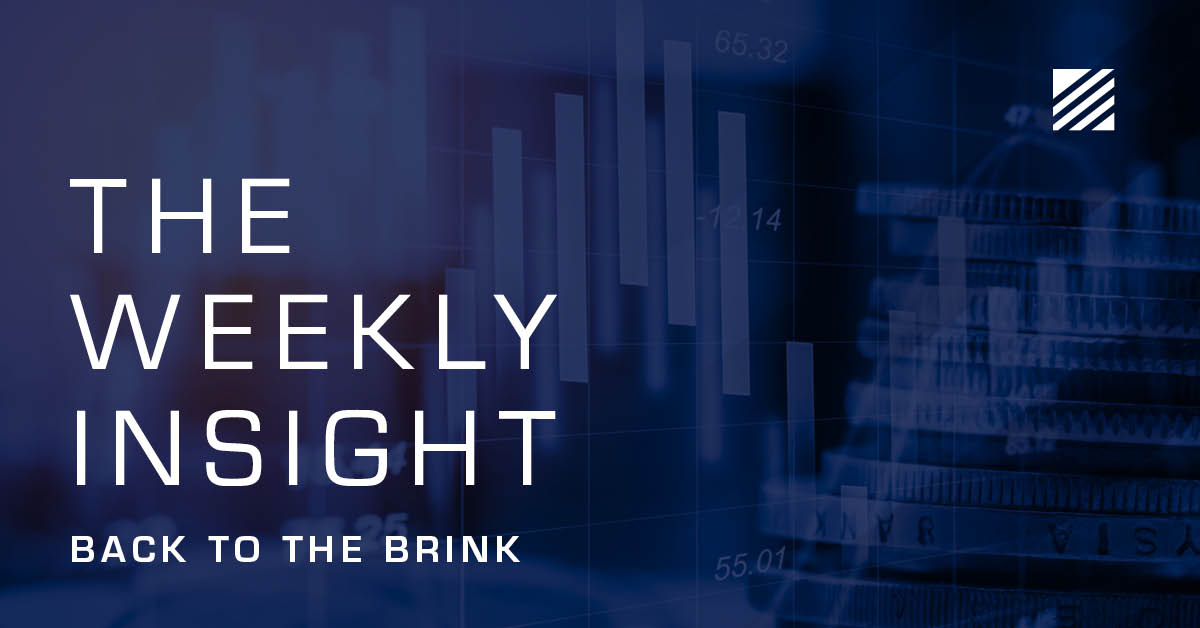 H. L. Mencken once wrote about what would eventually happen with American democracy. As he said in 1920:

“As democracy is perfected, the office of the President represents, more and more closely, the inner soul of the people.  We move toward a lofty ideal.  On some great and glorious day, the plain folks of the land will reach their heart’s desire at last, and the White House will be adorned by a downright moron.”

If we polled our clients today and asked the question “Has a moron been in the White House at any time in the last 8 years?”, we can say with certainty 99% of you would say yes. The name of the “moron” might be different, but we’ve all been disappointed in our leadership in some way, shape, or form.

But today we’re not picking on the President. Well, that’s not entirely true. He’s a part of it. But really, we’re picking on everyone in Washington, D.C. who was elected to serve the American people. Because, to be frank, we just don’t understand how they keep letting us get here again, and again, and again.

Pulling Us Back From the Brink

We must give credit where credit is due, because during the pandemic, Congress came together and passed significant support packages for the American economy.  We may not agree with how much was spent, or how it was spent.  But amid the crisis, it was vital that we came together to buoy the economy.  It wasn’t just important for us, but also to show the international community that the largest, most stable economy in the world would still be here when everything settled out.

And the support was massive.  We’ve shown this chart before, but it’s worth showing it again.  It compares the fiscal support given during the Great Financial Crisis vs. the support given during the pandemic.  This time around it was much bigger and happened much more quickly.  There was no question Washington was going to backstop the economy.  We may have been at the brink, but our politicians got together and pulled us back. 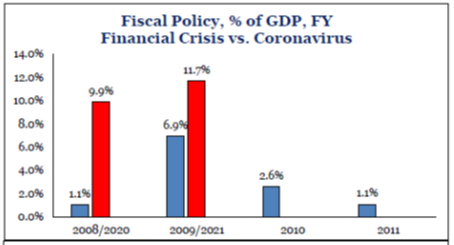 Simply put, it worked.  Even through the Delta variant, the economy is moving along.  Household income and savings are up significantly.  Debt – and debt delinquencies – are down.  When it comes to the consumer, the economy is as healthy as it has been in a long time. 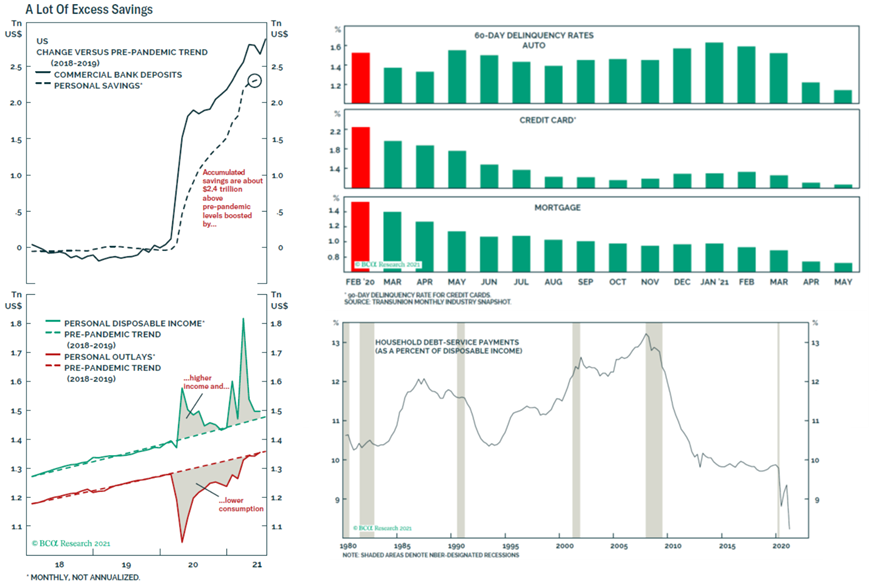 Yes, the market pulled back – slightly – in Q3.  That was largely the fault of the Delta variant.  But we’re still on pace for a great year.  A consultant of ours lays it out this way: things are going well, but the tail risks are getting wider.  And the biggest of those tail risks today, in our opinion, is that of a political misstep.

Back to the (Avoidable) Brink

This brings us back to our friends in Washington.  There’s a lot of drama going on right now in Washington.  There was the risk of a government shutdown last week, which was thankfully averted (until December…when we get to do it again).  Then there’s the infrastructure bill.  And then there’s the “infrastructure” bill.  Both are huge potential expenditures and should be furiously debated.

But all of that may be for naught.  The one which should be the easiest thing to figure out – the debt ceiling – is the one that may end up being the biggest trouble of them all.

It’s important we first truly understand what the debt ceiling debate is about.  You know us – we don’t think Congress should wildly spend money they don’t have.  We like fiscal responsibility.  That’s not what this conversation is about.

So, what is the debt ceiling?  It’s a pretty simple definition:  the debt ceiling is a statutory limit on the amount the Federal Government can borrow to pay its bills.  That seems like a good thing, right?

Yes, we suppose it is.  The problem is the debt ceiling and the amount of spending Congress approves are two separate issues. So, on one hand, Congress is saying “go spend all this money”.  But on the other it’s saying “Wait.  What?  You want to borrow money for that?”

And while, in years past, you could make the argument that one party or another was responsible for the debt, that argument really doesn’t hold water today.  Both parties agreed to the massive spending we did to keep the economy afloat during the pandemic.

So – surprise, surprise! – this isn’t really an honest argument.  It’s a political one.  But if Congress doesn’t extend the debt ceiling in time, this political argument could have disastrous real-world consequences.  Why?  Because it risks the “full faith and credit” of the United States.  Our credit rating would immediately be downgraded making it more expensive for the government to borrow money.  Not only will it compound the very problem we’re facing, but it also has significant consequences for the rest of the debt and equity markets.

Hopefully this gets resolved as it has in the past.  We’ll hope – for now – that the politicians are using this as a bargaining chip to gain leverage.  We’ll be monitoring this closely over the coming weeks.