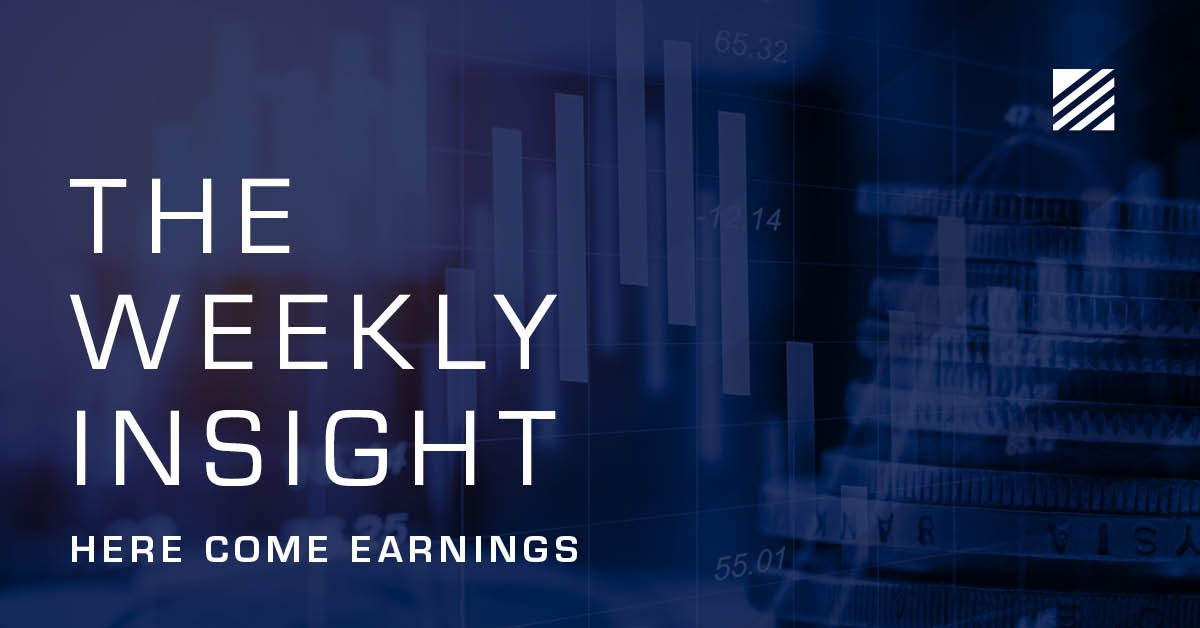 Last week, public policy reared its head again into the economic debate with the debt ceiling discussion. It seems as though those concerns have been alleviated (at least until December). With that off the table, we’re back to traditional drivers of the economy as the big movers on the markets this week. And it’s the start of earnings season. So let’s take a look at what may move things this week and do a little preview on what we hope earnings season has in store.

As we mentioned in last week’s memo, the market was largely flat to a little down last quarter.  Beyond the political issues causing concern, the biggest drag was the COVID Delta Variant.  We’re certainly not prepared to write COVID’s obituary, but we are starting to see a significant slowdown in cases.  Hopefully that means we’re going to get a bit of a break here where the economy can refocus on recovery. 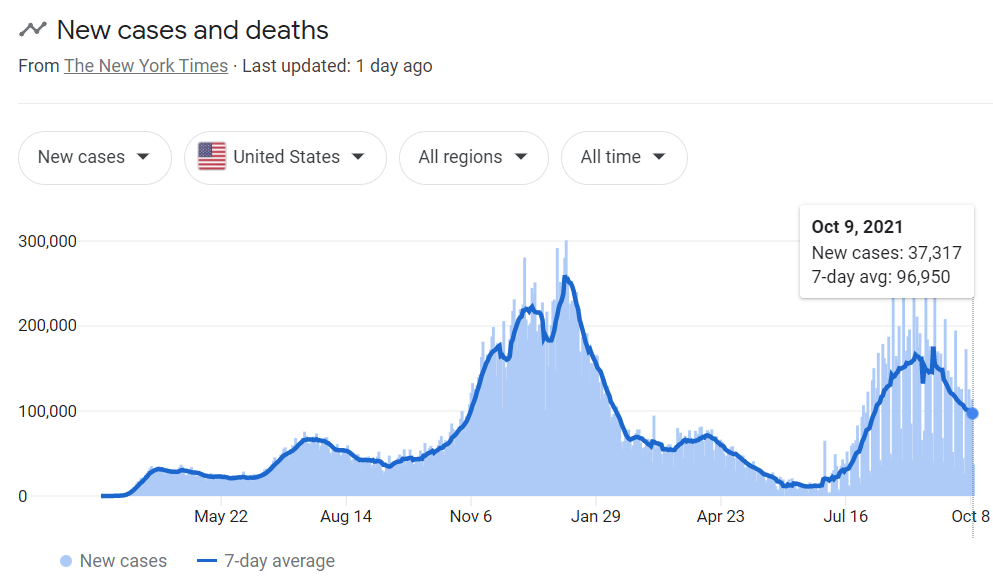 If there is one positive from the Delta Variant, is it did drive up vaccine rates.  As of today, 76.4% of all vaccine eligible individuals in the United States (age 12+) have received at least one dose of the vaccine, as have 78.2% of all adults.  This is probably about as high as those numbers are going to go right now.  An Axios-Ipsos poll shows us that 20% of respondents say they are unlikely to get the vaccine – meaning nearly every adult left who hasn’t gotten a shot.  That number was 34% in March, meaning the Delta Variant changed some minds and drove people to their doctors for vaccines.

This certainly isn’t the end.  At this point, we’re just assuming we’ll see more surges of the virus.  But the Delta variant proved we could operate a functioning economy through a surge.  All of this should give the market confidence that we can move forward in the recovery phase.

We’ve started to see a bit of earnings results with 21 of the S&P 500 companies reporting actual results.  That’s a small sample size and we should have a lot more meat on the bone after this week.

What we do know, however, is that the expectation for the quarter is outstanding.  The current estimate for the S&P 500 is earnings growth of 27.6%.  FactSet had an interesting chart out this week which points out that – traditionally – the final result of earnings is much more positive than the expectation.  In fact, if past trends hold, it’s quite possible we’ll see 30% earnings growth for the third straight quarter. 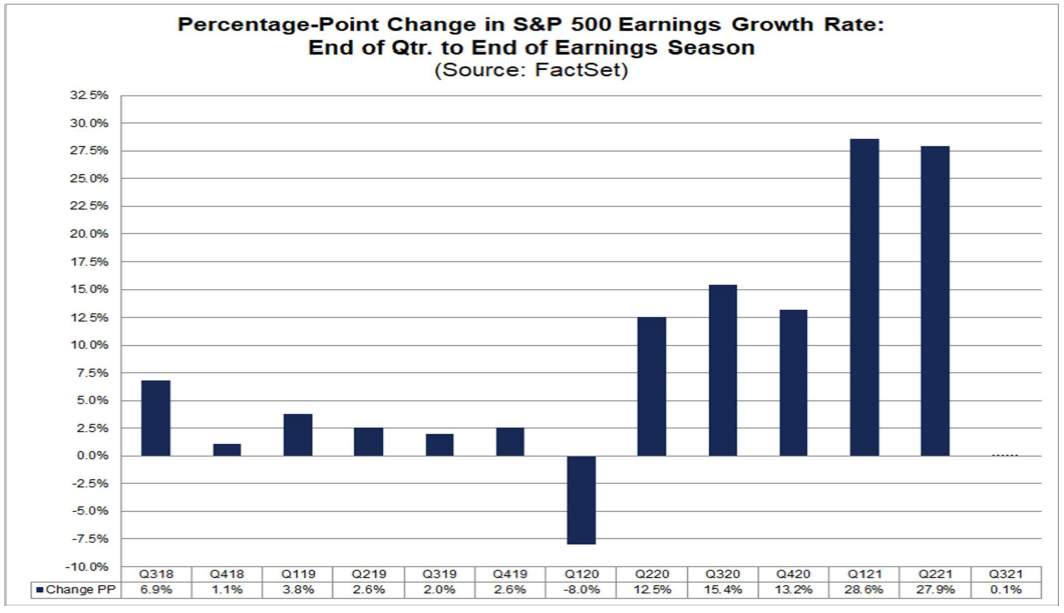 As we’ve said many times, this growth is relative.  It’s how much earnings grew compared to the same quarter last year.  As we all know, last year…well…sucked.  So, this type of outperformance can’t continue forever.  But there is a much more important statistic buried in all this data:  the forward P/E ratio.

We’ve talked about P/E ratios a lot in these pages.  There are only two ways to cool off an overheated P/E ratio:  raise earnings or reduce the price of stocks.  The current P/E (based on these earnings expectations) is 20.5.  So, while the stock market has risen dramatically in the last 18 months, the valuation of the market has gotten better over the last six or so months.  In fact, earlier this year, the S&P was trading at 25x forward earnings meaning the valuation of the market has come down more than 18%.  With no pressure on interest rates expected between now and the end of the year, this may mean the market has some legs.

Speaking of interest rates (nearly everything comes back to rates these days), let’s talk about the anemic jobs report that came out on Friday.  The September Nonfarm Payroll data came out and it came in well below expectations.  The market expected 500,000 new jobs and we only got 194,000.

There are a lot of ways to justify the miss – the most obvious of which is the Delta surge.  We can’t possibly unpack the whole jobs debate here.  We just thought it very interesting that on the day of a pretty crummy jobs report the market traded up for most of the day and ended basically flat.  Why no panic?

The answer ties back to the biggest driver of this market recovery:  if the jobs aren’t being filled, the Fed won’t meet its requirements for an economic recovery.  If that doesn’t happen, the risk of interest rates rising is diminished.  That’s good for stocks.  It’s all about the Fed these days and is going to be for a while.

We’ll be back with a bit deeper diver on earnings next week, as we’ll start to have data from the big banks and some other big reporters.  In the meantime, please don’t hesitate to reach out if there is anything we can do for you.

Oh…and one more thing… How about them Hawkeyes!  😊