The Weekly Insight: Why Interest Rates Matter for Equities 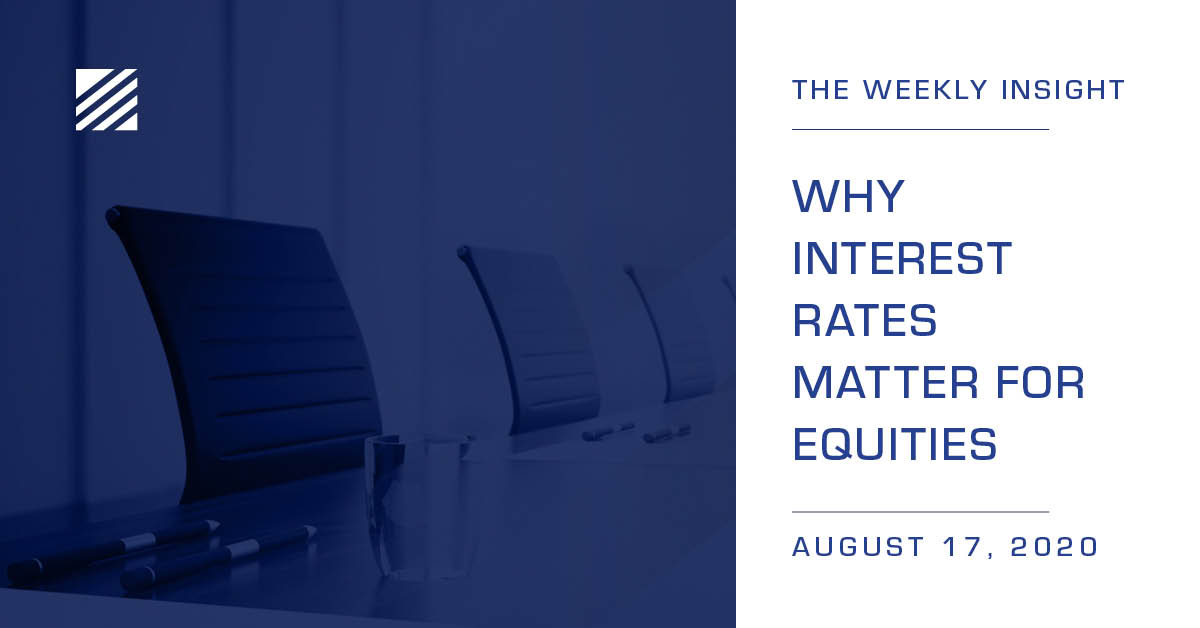 If you didn’t know what a “derecho” was before this week – and you live in Iowa like we do – you sure do now. On Monday, shortly after our last newsletter went out, a large portion of our home state was hit by this unique type of storm. For those elsewhere in the country, imagine a storm, 100 miles wide, with winds as high as 112 miles per hour racing across the state. It was the equivalent of a Category 2 hurricane – but there was very little warning.

The damage was, in some parts of the state, indescribable. Crops were devastated. Some families are still without power. Homes and businesses were destroyed. Everyone in our office knows someone impacted by these storms – including family. Unquestionably our thoughts and prayers go out to each of them – and each of you who were impacted by this terrible force of nature.

Shortly after the storm, someone sent us a link to a t-shirt available online. It said this:

We must admit to feeling the same way.  The gut punches just seem to keep coming.  COVID, economic turmoil, riots, elections, and now horrific natural disasters.  But as we look around our home state today, we also see something all of us should remember: Neighbors helping neighbors.  Communities digging in to clean up.  The good people of this state – and this nation – rising to the challenge.

We know in the age of the internet – where you can get immediate confirmation of just how horrible everything is – it is easy to get discouraged.  But if you are feeling down, we would encourage you to drive through central and eastern Iowa over the next few days and see the resiliency of this nation.  When 2020 is all said and done, we’ll still be here, and we will (eventually) be just fine.

The Pick is In: Kamala Harris

As you are no doubt aware, Joe Biden announced Kamala Harris as his pick for VP in the fall election.  Depending on your outlet of choice, you will likely hear a lot about how she is the best pick in the history of mankind, or the devil incarnate.  We are sure neither is true.  But we also know, while a VP pick rarely impacts the outcome of the election, it does tell us a good bit about the policy direction of the top of the ticket.

We will be providing a much more detailed analysis in the coming weeks about the two candidates and the impact their victories may have on the market and the economy.  In the meantime, let us just say this about the Harris choice:  it doesn’t rock the boat.

Harris has undoubtedly supported some liberal economic policies that Wall Street would not love – but she has tended to go along with the pack.  Does she want to raise taxes on the wealthy?  Yes.  But she has not done significant work to move the ball forward.  Does she want to get aggressive on climate change?  Yes.  But that would be an assumed policy of any Democratic candidate.

What Harris is not is a Bernie Sanders-style progressive (or Socialist as we used to call them).  There are picks that would have given the market substantially more fear than Harris with Elizabeth Warren being at the top of that list.  That explains, we believe, the market’s reaction the day after the announcement – up over 1% at the opening bell.

Despite the slow rise of interest rates a few years ago, they have essentially been at or near all-time lows for nearly a decade.  The advent of COVID assured that would not change for some time.  When something like that becomes a constant, it is easy to forget just how important it is.

Consistently low interest rates have an impact on both the stock and bond markets.  As you know, we have stayed busy in select areas of the bond market.  We continue to find opportunities in the structured note space – but they are work to find.

A few days ago, we were pricing CDs for a client.  Bluntly, we have not done this in a while since we knew the rates would not be good.  But going through the process was, well, astounding.  Here are the rates on CDs available via TD Ameritrade today:

It is no better for corporate bonds.  The highest quality corporates (AAA) are quoting at less than 1.00% annualized for any period less than 10 years.  And you do not even want to imagine what is going to happen to the value of those bonds when interest rates start to rise.

There was an article in TMZ (a celebrity gossip site) of all places last week talking about how “easy” it is to day trade stocks. In the commentary they talked about how many new people were racing into the stock market.  That has been used as an excuse by many to talk about how, when the masses come into the market, you should get out.  As the old saying goes, when your taxi driver starts giving you stock tips, it is time to run for the hills.

But as you dig deeper into the data, what you find out is that money is flowing out of stocks – and into bonds – and has been doing so since 2017. 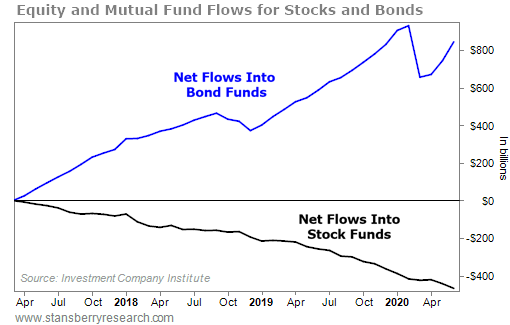 So, despite the fearmongering, the truth is a lot of assets have been running to an asset class that is essentially paying nothing when you account for inflation.

What does that mean?  In the end, when people (and maybe more importantly – institutions) are looking for the best risk adjusted return potential for their money – equities must be in the mix.  Are the valuations a little richer than we would like them?  Yes.  But not by much (especially when you take the big tech stocks out of the mix).

There are always risks for the market – even more of them in a year like 2020.  But as we watch this summer play out, we still believe equities play an important role in a balanced portfolio strategy.