The Weekly Insight: While You Wait 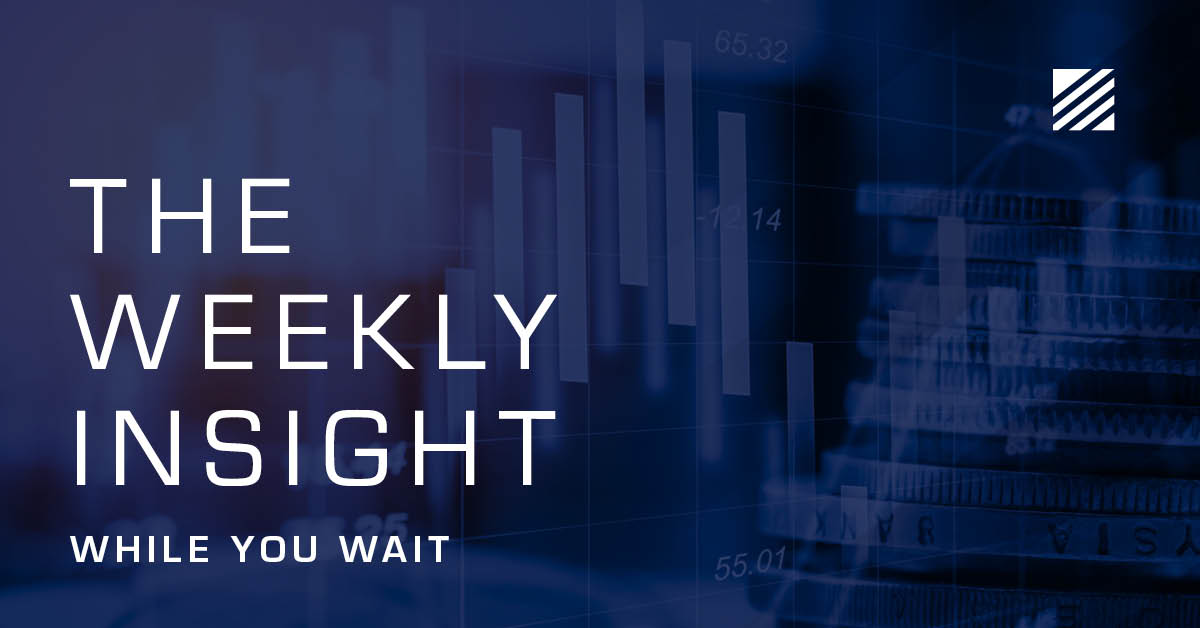 The Weekly Insight Podcast – While You Wait

The waiting game is here again. We did this a month ago prior to the Fed’s March meeting. And now we’re on the clock for the meeting coming up on May 3 – 4. The market has settled back into its old pattern, anticipating bad news and looking for every excuse to justify that expectation. That may end up being the right approach, it may not. But it also means there’s not going to be much to move the market in the next 10 days as we wait.

But while we’re waiting, it seems like a suitable time to do a refresher on what the market’s expectations are for the upcoming meeting. And it’s also a good time to do a quick update on how earnings season is going. Let’s take a look.

The market has been fairly rangebound since the last Fed meeting. We got a little traction after Powell’s comments on March 16th, but not much has happened since. The market is trading slightly down since that time. 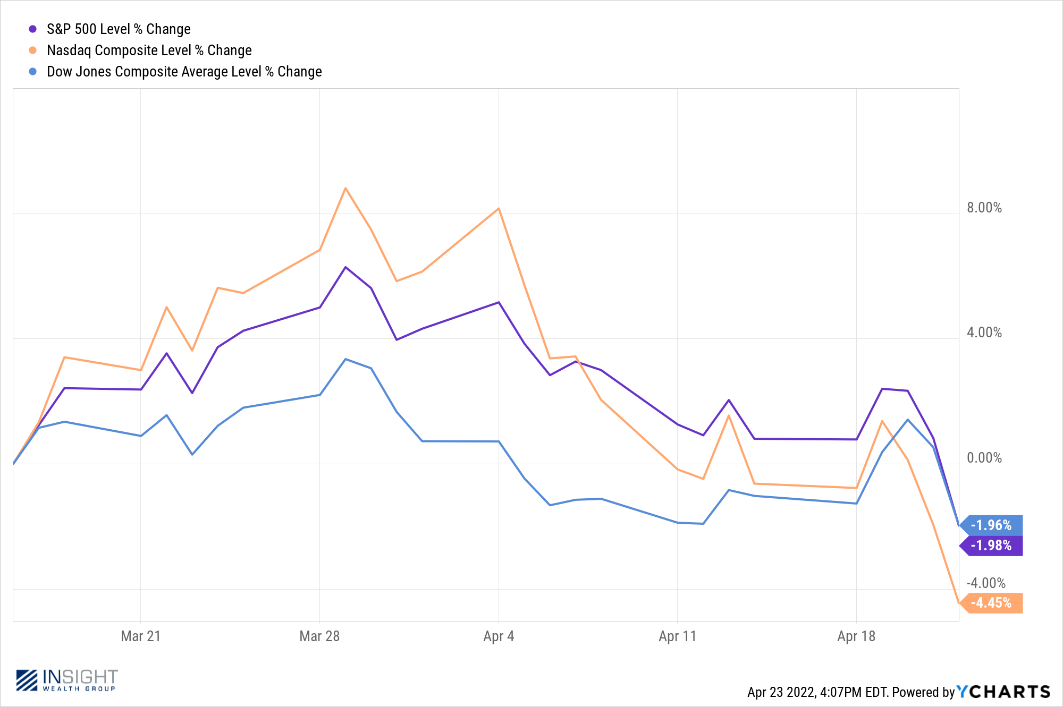 A significant amount of the downside happened last week. A portion of that – especially in the NASDAQ – had to do with earnings (we’ll get to that). But we would argue most of the last week’s weakness in the market was due to the statements of various Fed governors.

There were many Fed leaders dripping news of the potential for a 50-basis point hike in rates in May. Soon-to-be Fed Vice Chair Lael Brainard announced her support of a “double hike.”  New York Fed President John Williams said last week that a half-point rate rise was a “very reasonable option.”

But then the boss himself, Fed Chairman Powell, came out in support of it on Thursday as well. Speaking at a panel he stated that “It is appropriate in my view to be moving a little more quickly” before also commenting “fifty basis points will be on the table for the May meeting.” That pretty much sealed it. As of Friday, the market is placing a 99.6% probability of a 50-basis point hike 10 days from now. 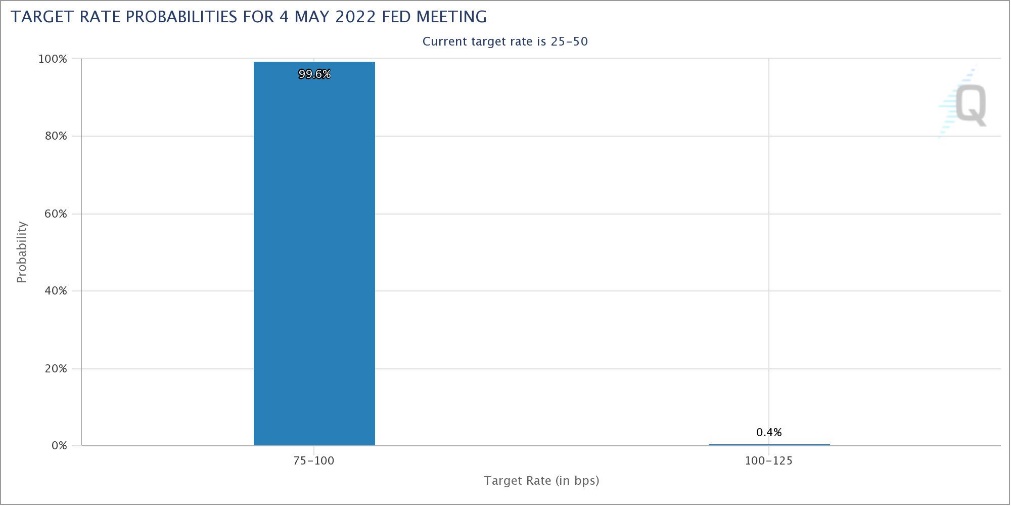 What’s more interesting is the expectation for the June meeting. Because, right now, the market is pricing in a triple rate hike – 75 basis points – just six weeks after the May meeting. But surprisingly, Powell’s comments meant a slight reduction in the probability of that happening – and a spike in the likelihood of a 50-basis point hike in June. 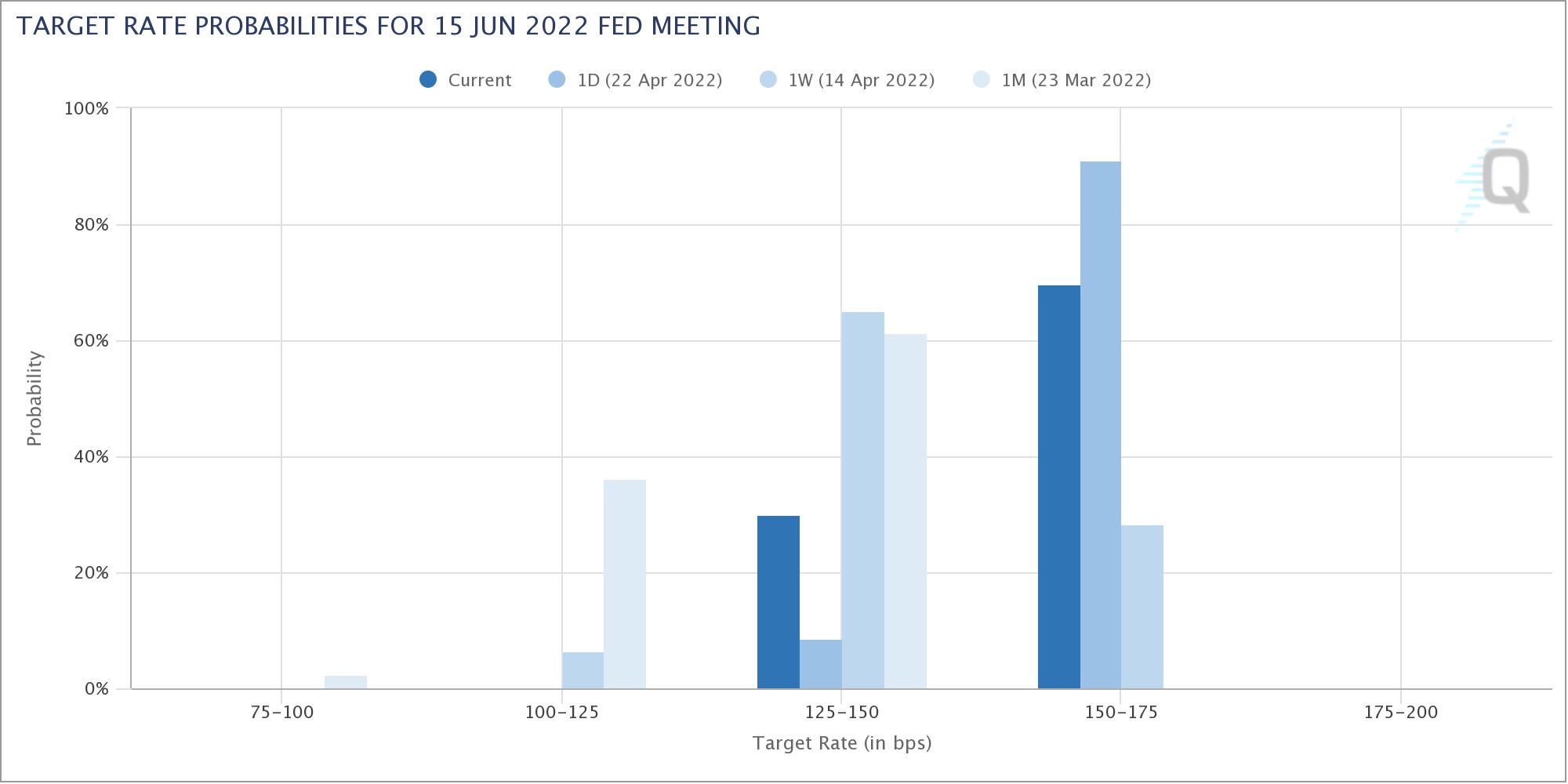 What the market is trying to divine – and so are we – is the ability of the Fed to rapidly raise rates without causing the economy to come crashing down around us. Can they do it? We don’t know. We do know the most dangerous words in our business are “this time it’s different.” But we would caveat any concerns the market has about raising rates with the memo we wrote last week.

We won’t dive into all of the topics again (you can read it here). But there is a compelling case that our economy – particularly the consumer – is in the best position we’ve seen in some time. $4 trillion of cash in the hands of consumers will help weather an inflation/interest rate storm.

But now we wait. What Chairman Powell says after the meeting will be far more important that what they do, since that is largely pre-ordained. Is he optimistic about the future? Does he see signs of inflation waning? The market will respond more to that than it will a historic rate increase.

There’s two ways we can break down the earnings update this week. There’s the normal way we do it: is the market beating expectations? Where are P/Es? All the boring stuff. Or… we could do the Netflix earnings report!

All jokes aside, the Netflix quarterly report was by far the biggest news of the earnings week, and it had an outsized impact on the market. But what really happened? What drove the stock down 38% this week?

The easy answer is this: they announced they lost over 200,000 subscribers. Ready for the kicker, though? The consensus estimate was that Netflix would have $2.90/share in earnings for Q1. They actually had $3.53/share. That’s right, Netflix beat their earnings estimate by nearly 22% and their stock fell 38%. It’s now down nearly 65% from the beginning of the year. 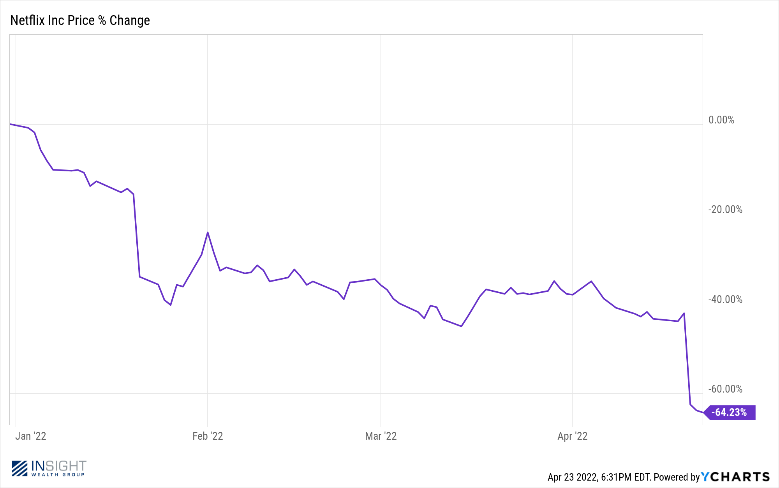 But this tells a particularly important story. Netflix’s price was not based on their profitability. It was based on their path for growth! And when that growth turned off? BAM. So did the interest in their stock. Interestingly enough, Netflix now trades at a P/E ratio of roughly 19.50x earnings. Right in line with the broader market. All the excess disappeared when the market assumed the growth was over.

Elsewhere in the market, the earnings momentum continues to be strong. You may recall from previous memos that we entered the quarter with analysts expecting 4.80% earnings growth (see our memo from March 28th).  We suggested at the time that number would grow. And that’s what we’re seeing. 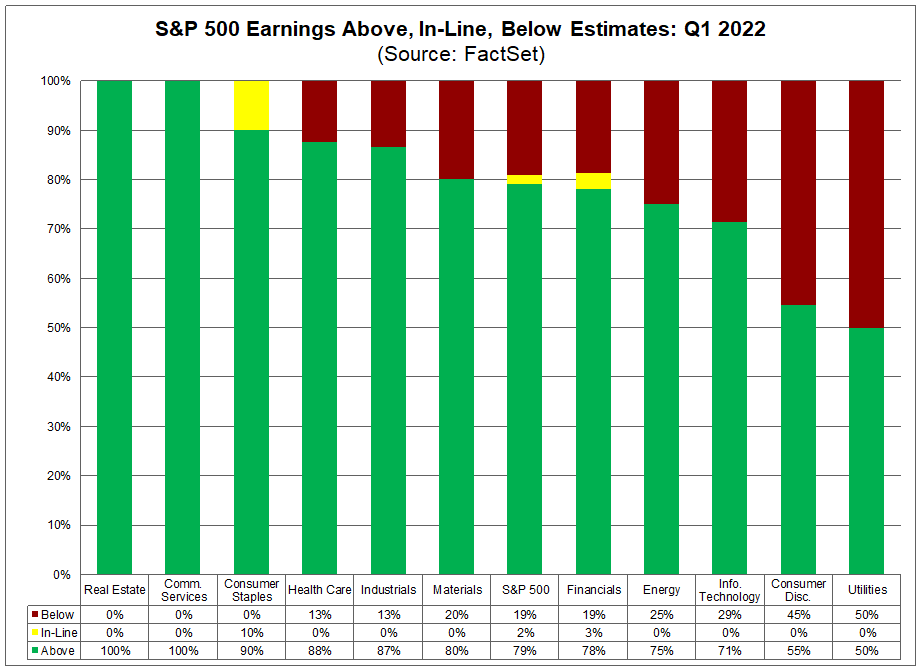 Between the earnings growth and the Fed induced volatility, we’re seeing the market get cheaper and cheaper each week. According to Biriniyi Associates, the S&P is now trading at a forward P/E ratio of 19.35.

We’ll leave it there for this week. We hope you have a wonderful week. If you have any questions – or need any assistance – please don’t hesitate to give us a call!