The Weekly Insight: We Guess It’s Time to Do This… 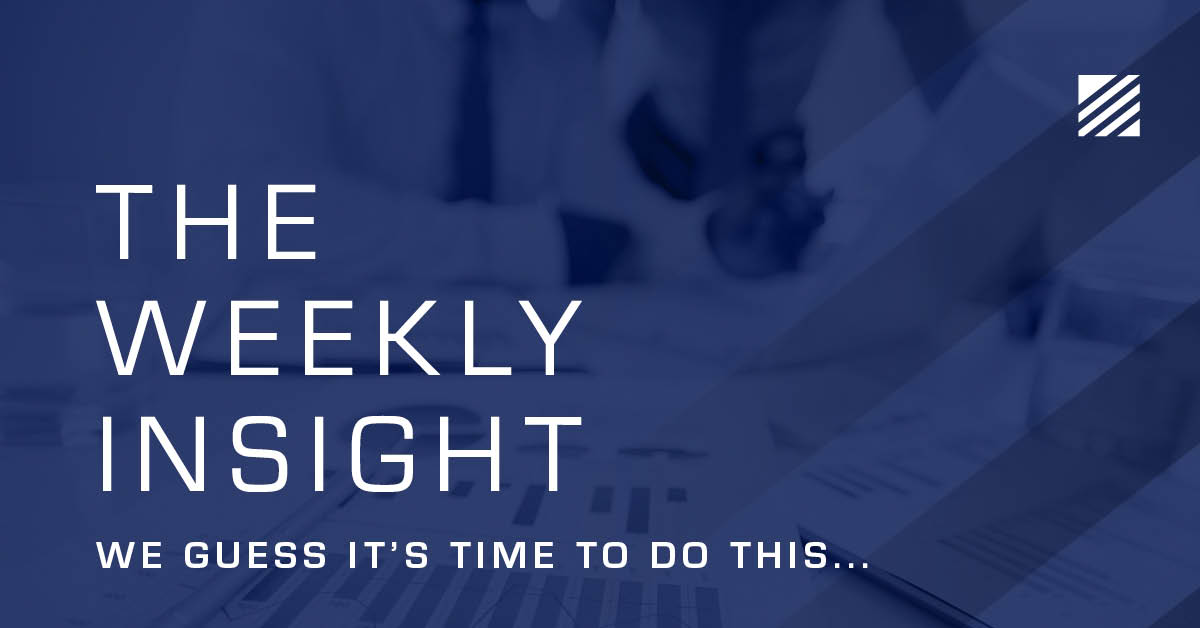 Drumroll, please…  This is going to be one of those memos that will undoubtedly raise someone’s blood pressure.  That’s because after all 2020 has offered us – Coronaggedon, stock market crashes, locust swarms, and even murder hornets! – this fun year still has one major card to play:  A Presidential election.  So – that’s right – we are about to talk politics!

We have talked a lot in the past few weeks about the impact of real data starting to roll in during the month of July.  That will continue for the next few weeks and we will not belabor that point anymore until we know what the outcome is going to be.  Once this – potentially volatile – month is behind us, and presuming the world isn’t fully consumed by COVID-19 panic again, the next big game in town is going to be the impact this election will have on the markets and the economy.  And – if history is our guide – it is going to have an impact.  So, let’s be ready for it.

Where Are We Today

First and foremost, let us start this discussion with a disclaimer:  we do not have a lot of faith in pollsters right now.  It is not that they’re not trying to get it right – it’s just that they have been so wrong for the last five years or so.  It all started with Brexit, about which the pollsters were horribly wrong (a landslide defeat for the plan was expected and we all know how that worked out).  It was compounded by another complete whiff on the Trump/Clinton race in 2016.  As you can see by the chart below, Trump only led in the polls for less than one week during the general election period and that was immediately after the GOP Convention. 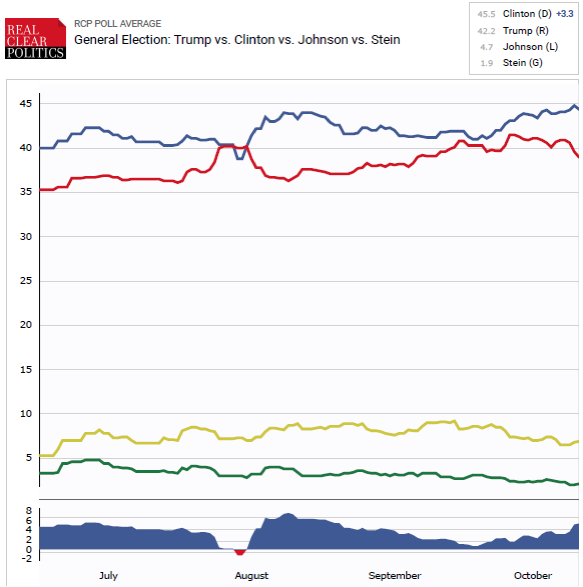 The polls have for the last few years been clearly missing something.  There is a lot of debate about what that might be, but we would suggest a simple explanation (at least for Brexit and Trump/Clinton):  enthusiasm.  Like Brexit or not, the people supporting it were much more enthusiastic than those opposed.  The same could be said for the 2016 Presidential race.

That enthusiasm cannot really be measured, and certainly cannot be measured four months before the election.  So, we need to take polling with a grain of salt.  A LOT can happen in four months – and as down as Trump seems to be in the polls – just remember this thing is not over until Election Night.

Nonetheless, the polls still matter when it comes to both public perception and the market’s take on where things are going.  So, we will look to set the baseline: 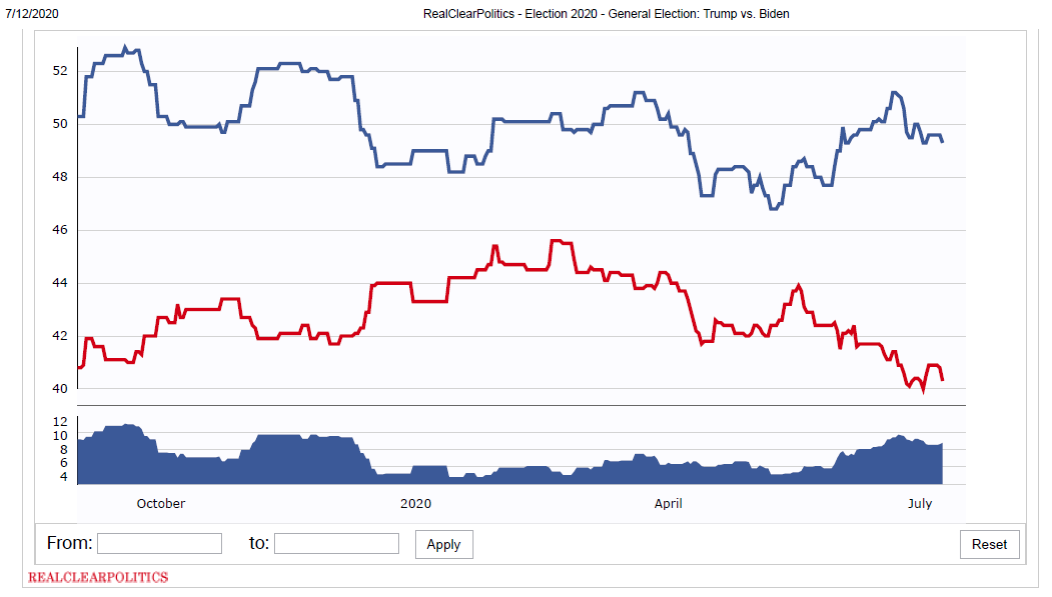 The sample above (and the Trump/Clinton chart above) is from Real Clear Politics (RCP) and takes an average of all national polls as they come out to show a moving trendline of the race.  It is important to remember that every poll is differently run, has a different sample, and asks different questions.  The theory behind RCP is if you take all of them, jumble them together and come up with an average you will get rid of the outliers – both good and bad – for each candidate.

We cannot possibly say this is the best method, but what we can say is that in only one poll this year – an Emerson College poll taken in April – has shown Trump in the lead.  The overwhelming message to the market is Trump is losing to Biden.

The other question the market is struggling with right now is what will happen in the U.S. Senate.  Right now, the Republicans hold 53 seats and the Democrats hold 47 (technically 45, but the two “Independents” in the Senate caucus with the Democrats).  Presuming a Biden victory, they need to pick up three seats to control both the legislative and executive branches of government.  Whether that happens or not will all depend on the enthusiasm shown for the two Presidential candidates.

What Does this Mean for Your Portfolios?

First, let us recommend you take everything in the last section with a barrel of salt.  We have no idea what is going to happen in this election – and neither do the pollsters.  We have a diverse group of folks at Insight – some conservative, some liberal.  Some will be very happy on the morning of November 4th and some will be very sad.  Frankly, it does not matter.  What does matter is what history can tell us about how to prepare for the coming months and how to prepare your portfolio for success no matter the outcome.

There are a couple of things we can take from history – and our current situation – as we head into election season.  Let’s look at them:

One thing we know is there is some seasonality to volatility in the stock market.  Some of it makes sense.  For example, volatility typically drops in the summer as business slows down and traders head to their vacation homes in the Hamptons.

As they return from their hiatus, volatility in the fall spikes with the most volatility of the year happening in September, October, and November.  Election years, however, take this seasonality to a new level.  As you can see by the chart below, volatility (as measured by the VIX) spikes aggressively in late September and remains elevated through the election.  This is happening at levels 20% or more above where it is during a non-election year. 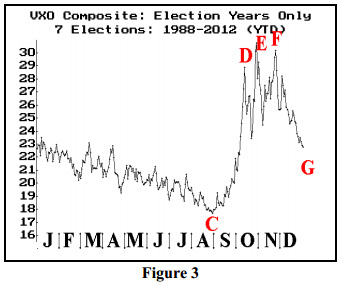 It is important to remember that volatility does not have to be a bad thing.  It means swings in prices – they may be swings to the upside or the downside.  But the last few months before a Presidential election means a lot of activity in the market.

There is a common belief amongst many investors that “Republicans are good for the market and Democrats are bad for the market”.  While that sounds great to Republicans, it is not really that simple.  It is true that the market has performed best in years where Republicans have controlled the White House, House, and Senate.  But the numbers are not that much better than when Democrats have controlled the White House and Congress has been split (one house R, one house D). 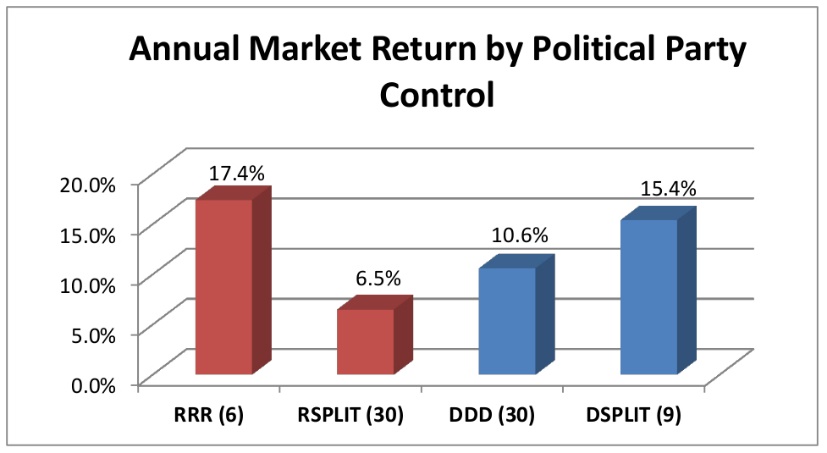 More importantly, it seems the market just really loves the year after an election.  We have said many times in the past that the market hates uncertainty.  It can deal with things it does not like – if it knows what is coming.  As you can see below – except for times of economic uncertainty – the market has performed quite well in the year following a Presidential election.  And it does not matter the party of the President. 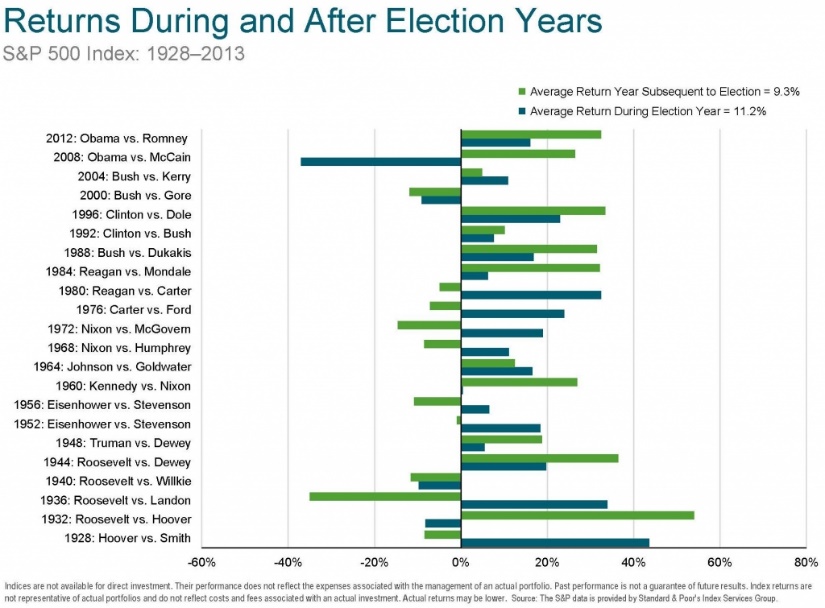 We are going to guess a great number of people reading this memo despise politics.  One of the reasons? It seems politicians will do anything to get re-elected.  In a weird way, this may pan out for economic good in this challenging time.

Every politician knows they are in for the fight of their life if people are feeling economic strain.  Which means they will do anything they can to relieve that strain before voters walk into the voting booth.  This year that like means additional economic stimulus.

It is hard to say at this point what that stimulus will look like.  We are hearing additional stimulus checks to families and expansion of the current unemployment program.  We would expect it to be wrapped up before Congress goes home for its August recess.  We’ll watch and see.

So, What is the Plan?

As we have said in our past memos, the plan for July is to patiently watch for the results from both businesses and the economy we have been expecting.  That starts this week with JP Morgan’s earnings on Tuesday.

We would anticipate this allows us a quiet period in August to make some plans before the election begins in earnest in September and October.  From there, we will really need two plans going forward:  a “Democrat Victory” plan and a “GOP Victory” plan.  We are working on these now.  The closer we get and the more certain the outcome looks; we can then begin to make some assumptions regarding the policies each party is suggesting presuming they win.

But we would caution you not to get too locked into any one expectation.  Wall Street learned that the tough way in 2016.  A lot can change in the next four months!  We will be working on your behalf to make sure we are ready no matter the outcome.

We will leave it there for now as we are certain we’ll be forced to come back to this topic many times in the next four months.  We hope we did not frustrate too many of you by bringing up the dirty “politics” word.  We promise we do not like to talk about it anymore than you!

We will be back next week to talk about the start of earnings season.  We’re looking forward to having some good data to chew on!