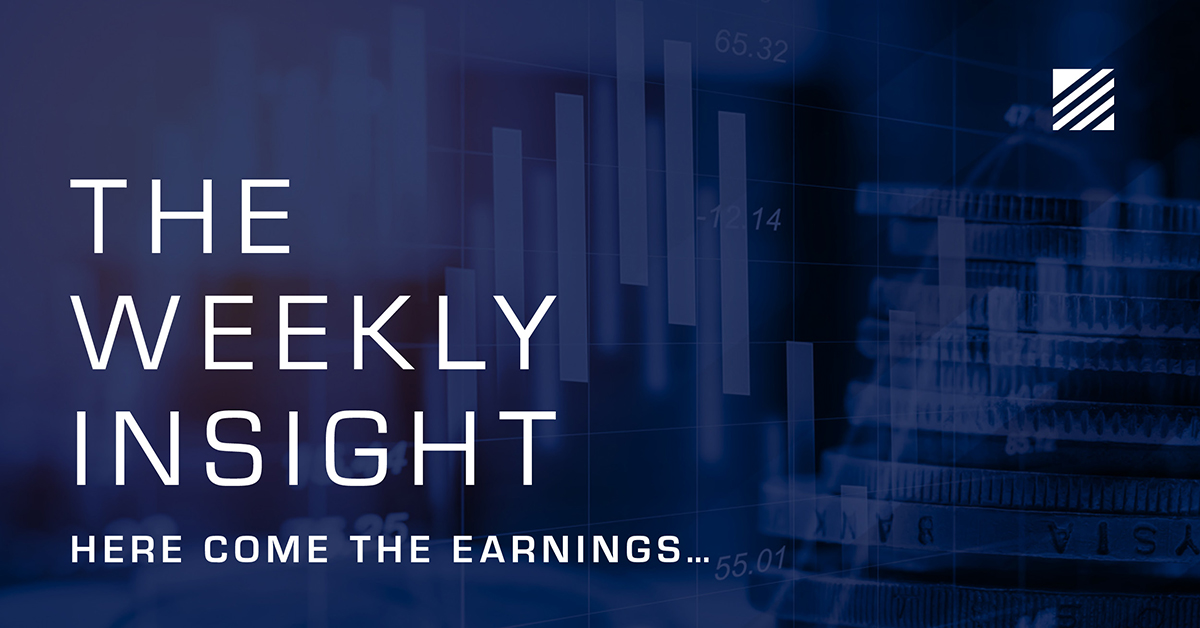 After last week’s memo – all about the Presidential Election (ugh…) – we are going to end your punishment and get back to talking about the markets this week. As we have discussed in several past memos, we have been anxiously waiting to have some earnings data to pore over and it is finally starting to trickle in. What is a trickle today will be a flood over the next few weeks, so we are going to have a much better understanding of exactly how COVID impacted the market in Q2.

Despite a very positive earnings report last week for his company, J.P. Morgan CEO Jamie Dimon had some not-so-positive things to say about the economy that an astute client sent along to us.  We are going to dig into that a little bit as well as we address what might happen in the market between now and September when everyone starts getting spun up about the 2020 campaign.  Let’s dig in.

As we said above, while we have some earnings data, we do not yet have a large sample size.  But the sample we do have also covers a large swath of the economy – especially the big banks.  Let’s start there.

We saw J.P. Morgan, Wells Fargo, and Bank of America – the three largest U.S. banks – report earnings this week.  Only Wells Fargo missed analysts’ expectations and that was after a large write off for “expected loan losses”, which each of the banks did.  Setting aside money in anticipation of a problem is exactly what the Dodd-Frank bill coming out of 2008 was intended to make the banks do.  If you look at their earnings reports this week, it is working (for now).

It is important to remember that the banks were entering this period in a much stronger position than they have ever entered a period of financial uncertainty.  New Federal rules coming out of 2008 dramatically increased their “Tier 1” capital ratio, meaning banks entered this period with more cash on hand and a lower loan-to-deposit ratio.  Additionally, they had the lowest rate of “non-current” loans that we have seen since 2005. 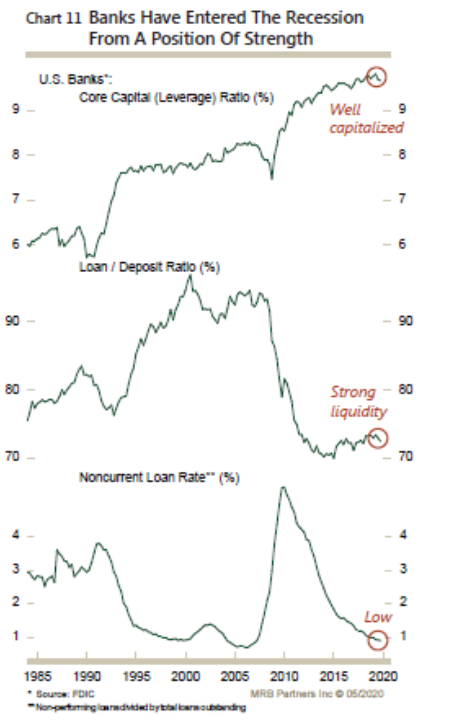 This means – unlike crises in the past – banks have increased lending during this time driven by historically low interest rates.  As you can see from the chart below, we have never seen a spike in lending like this headed into a recession (recessions are the shaded areas on the chart). 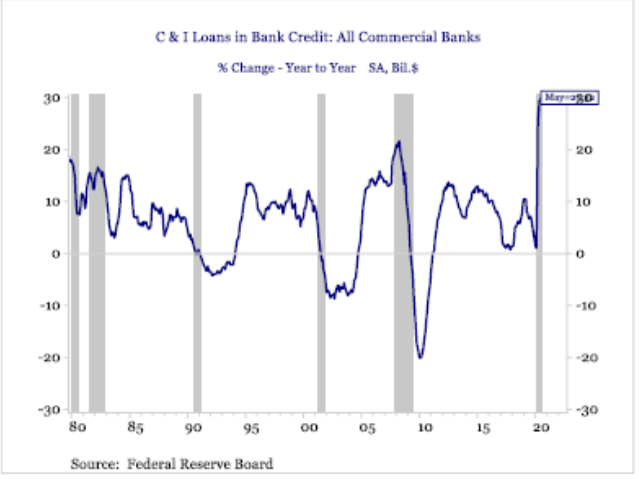 Most importantly, the banks are making substantial assumptions of losses over the coming quarters and are setting aside capital to offset those losses (so-called “loan loss reserves”).  As you can see from the chart below, if you look at the assumed loses and their hit to earnings, U.S. banks still come in well above the Tier 1 capital requirement.

As we have said many times during this pandemic, this is not a liquidity crisis.  Bank regulation has worked, and our financial institutions continue to be in good stead.

We have talked in past memos about the mindset investors and the market needed to have going into this earnings season.  It is pretty simple:  we know the news is going to be bad, but the story will be is it better or worse than the very bad expectation.

That story is not written yet.  We are basically in chapter 2 of a 10-chapter book.  But so far, the news is positive.  Generally speaking, earnings have surprised to the upside. 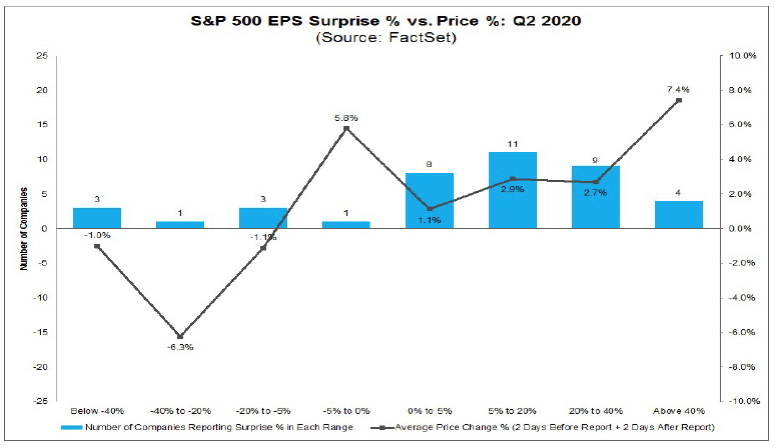 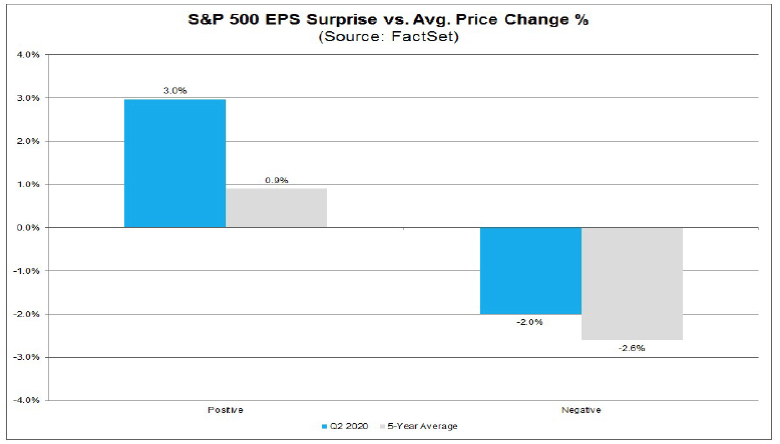 We will come back to these trends over the next few weeks to see if they continue to hold.  But in the meantime, we are “better” than the very bad expectation.

Playing Both Sides of the Fence with Jamie Dimon

We have a great deal of admiration for Jamie Dimon.  You can say whatever you want about the gentleman, but you cannot reject the fact that he’s successfully led the nation’s largest bank through two horrendous market and economic troubles.  And the bank is on very solid footing today as noted above.

This week, when talking about the future of the economy, he did what any prudent CEO would do:  he hedged his bets.  As he was reported saying on CNBC:  “If you look at the base case, an adverse case, an extremely adverse case, they’re all possible and we’re just guessing at the probabilities of those things…We simply don’t know, and, by the way, we’re wasting time guessing.”

To some degree, we must agree with Dimon.  While you know we hate the “this time it’s different” excuse, we never have been through something like COVID.  But there was something else Dimon said that really piqued our interest:

“In a normal recession unemployment goes up, delinquencies go up, charge-offs go up, home prices go down; none of that’s true here.  Savings are up, incomes are up, home prices are up.  So, you will see the effect of this recession; you’re just not going to see it right away because of all the stimulus.”

As you will recall, we noted the same thing in our memo a few weeks ago when we included this chart which shows that – due to stimulus – household incomes are going up during the pandemic. 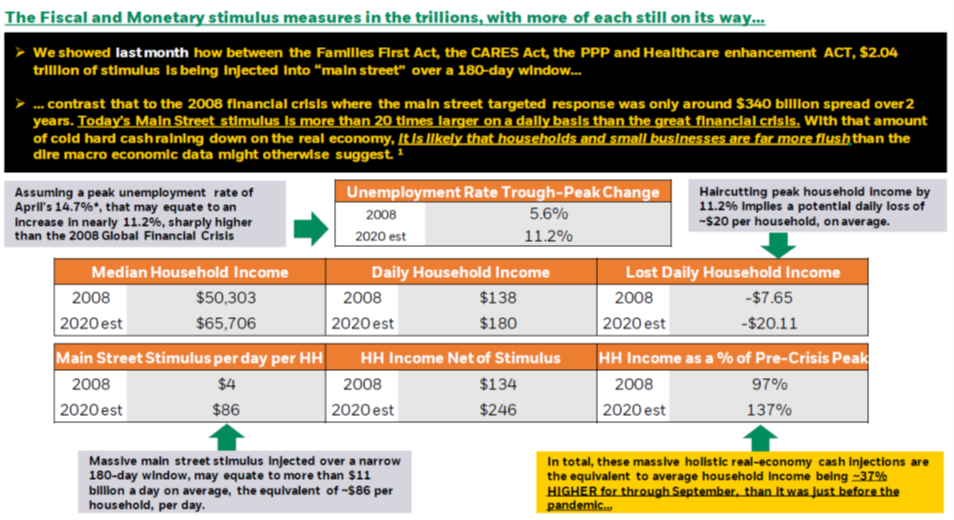 We are a pretty independent group of folks here at Insight – as are our clients.  We would venture the guess that very few of you like the idea of the government funding everything for everyone for an indeterminate amount of time.  But there can be no questioning the quick response from Congress has helped make this much less painful than it could have been.

But the well is running dry right now.  Much of the funding provided through the CARES Act – especially the unemployment support from the Federal government – runs out soon.  What happens next will have an impact on whether we get the “base case, adverse case, or extremely adverse case” Dimon discussed.  It is our expectation Congress will pass an additional stimulus bill before leaving town for their August recess in a few weeks.  But, if it does not happen, expect the market to react negatively.  We are going to be watching it closely and will continue to keep you updated.

As you know, we are more of a “fundamentals” firm than a “technicals” firm when it comes to making decisions on when and where to make an investment.  However, in times like these, it is important to keep an eye on the technical side of the trade as well.  With that in mind, we wanted to point out one specific point regarding the way the S&P 500 is trading right now. 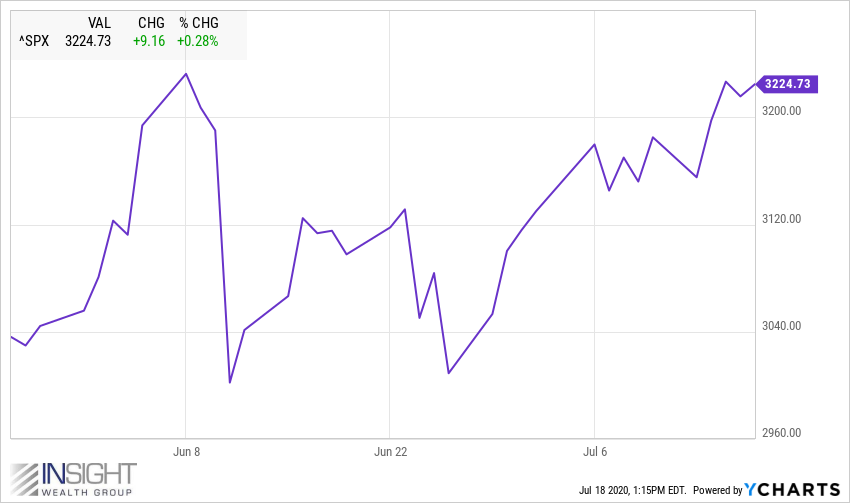 We are watching this range very closely, because any movement outside of it could indicate the start of a new trend.

We will be back next week with a deeper dive into earnings as we get more data from Wall Street.  In the meantime, if you would like to discuss the content of this memo or any other questions you might have about how we are managing portfolios in this historic time, please don’t hesitate to let us know.