The Weekly Insight: The Case for Energy 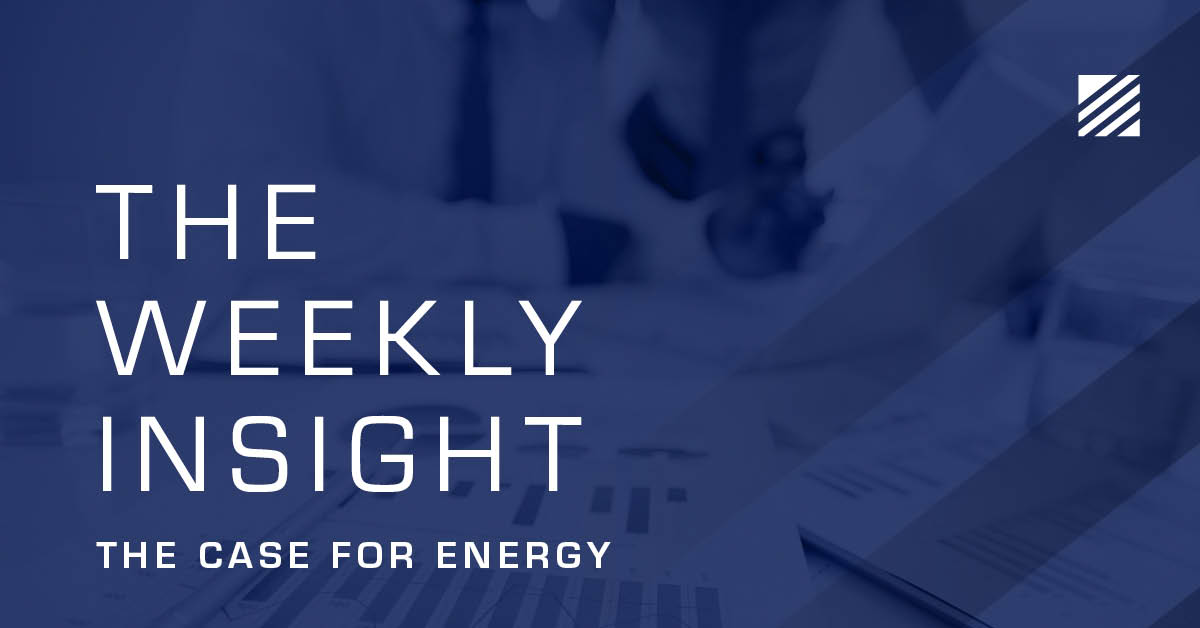 As we race towards the end of July, we continue to find ourselves waiting for a few more pieces of information before we can fully define our path for the next few months:  the conclusion of earnings reports and a decision from Congress and the White House on the next stimulus package.  We are going to spend a little time in this week’s memo updating you on these two topics, but the truth is there has not been much movement since our last communication.

So, we are going to take advantage of this lull and walk you through one of the big – and frequently discussed – decisions of our Investment Committee over the last few months:  the energy sector.  It has been, quite frankly, one of the most poorly performing areas of the market and portfolios.  But we believe it also presents significant opportunity in the future.  We will walk you through our thinking on this space and why we think continued exposure is important in portfolios.

But first, let’s go through the updates.

As we have said many times over the last several weeks, the Q2 earnings results that are being reported right now are not expected to be “good” by anyone.  Instead, the question is whether they are “less bad” than the horrible expectations the market has right now.

As you will recall from last week’s memo, the results had been positive.  Most S&P 500 companies that had reported were surprising to the upside.   A week later, that trend continues. 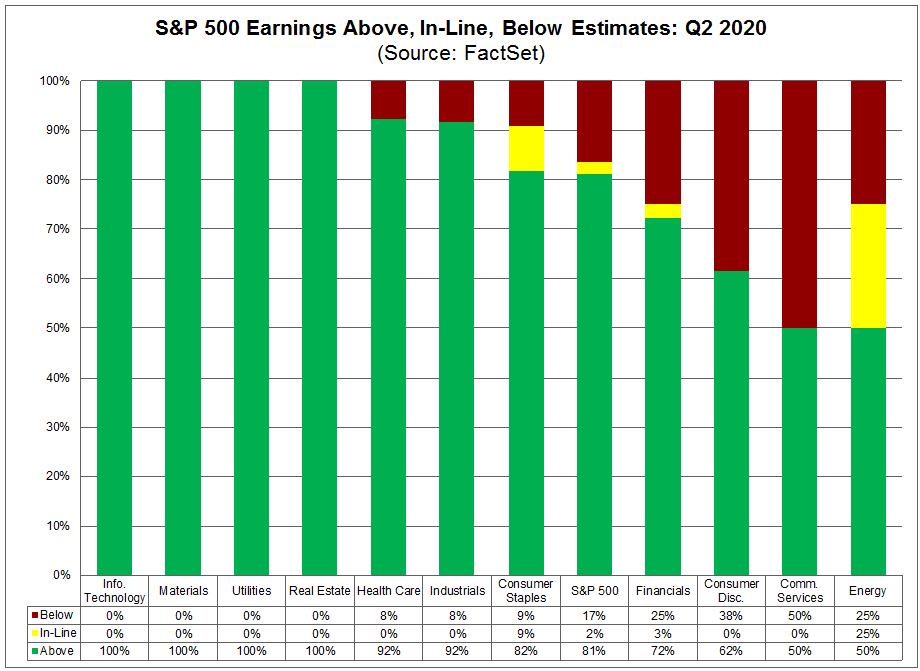 Along with earnings, company revenues have also surprised to the upside.  They continue to be bad – especially in sectors like energy and industrials – but most areas continue to outperform the expectations we had just a few weeks ago.  As you can see from the chart below, the expectation by analysts on June 30th was that S&P500 revenues would be down 11.0% during Q2.  Based on the reports we have so far, that number is actually 10.1%.  That does not seem like much on its face – but it is an 8.2% outperformance to the upside which is significant. 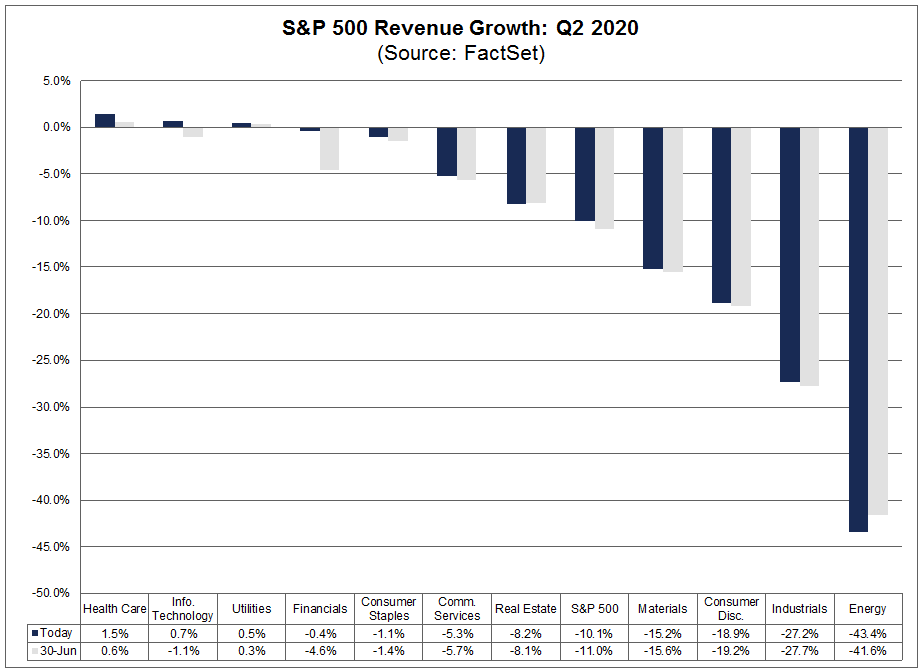 So, as we sit here a full 2 ½ weeks into the heart of earnings season – the news is “positive”.  We will continue to monitor this and update this report if things change.  But it is safe to say we have largely cleared one of the big hurdles for July.

This week is a big week for economic news as well.  The Federal Open Market Committee meets Wednesday and announces a decision on interest rates.  There is no expectation of a rate increase right now – but these meetings are watched very carefully for signs of trouble or optimism.

Additionally, we are finally going to get the Q2 GDP report on Thursday morning.  The consensus estimate has not moved much over the last few weeks and sits today at -34%.  A surprise – to either side of that mark – could be significant to the market.

We talked last week about the technical range the market had been playing with for the last several weeks.  As you will recall, the S&P 500 was locked in a range between 3,000 and 3,235.  The market had a moment of optimism – driven by an assumption Congress was close on a stimulus bill – and broke through that number.  That quickly died as politics continued to get in the way and ended the week back at 3,215.

The lesson from this is we are not going to break through 3,235 consistently unless the market believes a federal safety net is in place.  And Washington still seems a long way from making that a reality.

There have been numerous battlegrounds over the last few days on this bill.  The largest, however, seems to be a reluctance by Republicans to authorize a direct extension of the $600 per week bump in Federal unemployment benefits.  This is a particularly timely decision right now as the current program expires at the end of this month (God forbid Congress ever gets anything done ahead of time…).

It was announced over the weekend that the Senate GOP would put forth a plan today that would provide an additional $1,200 stimulus check to qualifying households and a more limited unemployment benefit – better than traditional unemployment, but not as significant as the current program.

Senator Lindsey Graham was quoted on Sunday with a very blunt assessment: “Half the Republicans are going to vote no to any Phase 4 package, that’s just a fact.”  That is not what the market is hoping to hear – even though it may be the right decision.  He did end his interview, however, by saying “I think we will come together before August the 5th to get this done.”

We will all watch and see.  It could make for a bumpy ride until then.

The Case for Energy

The last few years have been a wild ride for investors in the energy sector.  We all remember the last few months which have so generously gifted us both a single week in which oil prices were down over 50% and a day in May when the price for a barrel of oil traded negative.  But we cannot forget that as recently as four years ago, oil prices fell below $30.

Prior to “Coronaggedon”, oil had been trading around $60/barrel.  Despite all the crazy volatility, economic concerns and drop in demand, prices have recovered substantially and are currently trading just north of $41/barrel.

One of the stories we remind ourselves of around Insight is when – during the 2016 collapse in oil prices – we were told by a well-known “expert” (i.e. he gets his mug on CNBC frequently) that “oil will never trade above $30 again in my lifetime”.  Anytime we hear such a certain prognostication we can almost always count on it to be wrong.  This gentleman was wrong about 2 weeks after he gave us this wisdom – and continues to be wrong after the largest drop in demand we have seen since 2008.  But for a few weeks in May, he looked pretty smart again.  What is it they say about a “stopped watch”?

Energy is something that is infused in nearly each of our various portfolio strategies.  We have energy positions in our Enhanced Yield, Balanced, Growth, and Conservative Growth strategies as well as within Boyle-managed portfolios.

In each of these strategies, our energy exposure has undoubtedly affected portfolios negatively over the last few months.  And we can promise you when something is causing a problem in portfolios it is a bit like a splinter – it bugs us a lot.  We pick at it and pick at it and it drives us crazy.

There is one easy way to move beyond a situation like that:  sell the position and just never talk about it again.  Lord knows we know a lot of managers who have done exactly that over the years.

But the easy answer is rarely the right answer and – as we look at the best possible way to advance portfolios – energy is an area that has already been stress tested and has significant opportunities in pricing today.

But why is that?  As the old saying goes: “the cure for low oil prices is low oil prices”.  But we have never seen such a dramatic reversal in supply and demand as we are seeing today.

There is no question demand for oil is constrained right now due to the economic slowdown caused by COVID.  Less miles are being driven and flown in the U.S. and around the world.  That will not last forever – but we certainly cannot be sure when it will change.

But we do have some hard facts on the supply side of the market.  We know for a fact that supply cuts have been massive.  Here in the United States, the number of rigs drilling for oil is down 76.9% over the last year.  Gas rig counts (which were dropping before all of this started) are down 59.2%.  Our total rig count in the United States is at the lowest point we have seen in over 15 years. 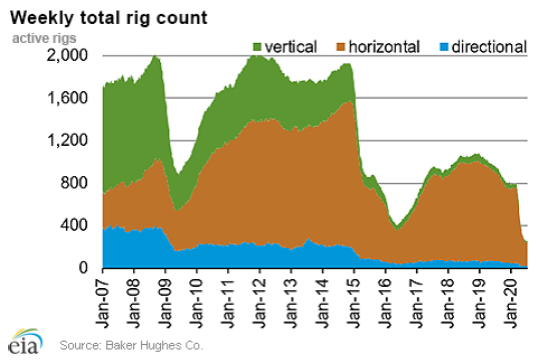 The same is true with our neighbor to the north.  Earlier this year there were more than 250 rigs working in Canada (an already depressed number).  At the start of this month there were just 14 rigs working in the entire country. 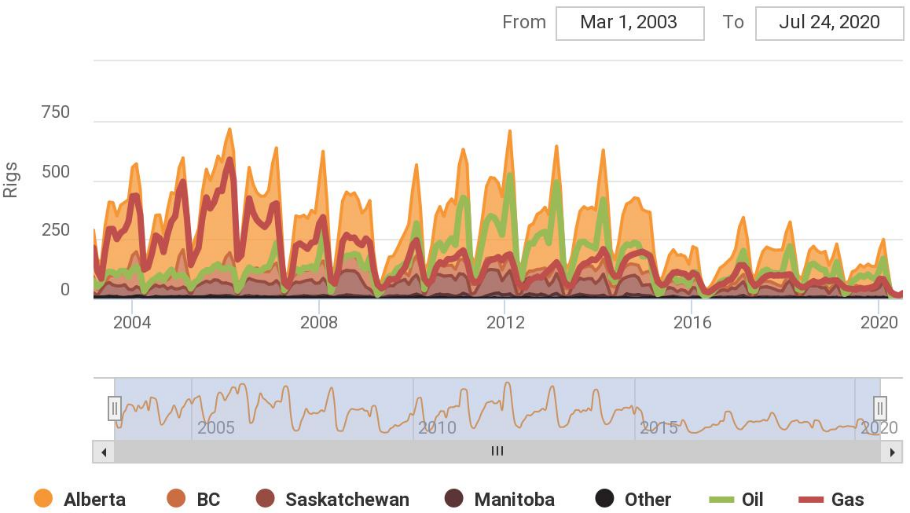 We are not the only ones who see this as a particularly bullish case for energy.  Christyan Malek, the head of JP Morgan’s oil and gas research, has been very bearish on energy since 2013.  This environment has changed his mind.  He is now projecting a very large supply/demand deficit to begin in the next few years – reaching a total of 6.8 million barrels per day by 2025.  That deficit is the equivalent of 35% of the U.S. production of energy products in 2019.  As he said, “The deficit speaks for itself.  That implies oil prices will go through the roof.  Do we think it is sustainable? No.  But could it get to those levels?  Yes.”

What levels is he talking about?  This one will blow you away.  He is discussing the likelihood oil prices could go to $190 per barrel in the next few years.  We are certainly not expecting it to get there – but even if it gets to half that price ($95/barrel), energy is going to be a good hold for portfolios.  So, we are going to hang in there.

As always, we appreciate you spending a little bit of your valuable time on our musings. We will be back next week with updates on earnings, GDP, and – hopefully – a finalized stimulus bill.  We should have a great idea of what August will look like by that point.

Until then, we hope you have a wonderful week!  Stay healthy!