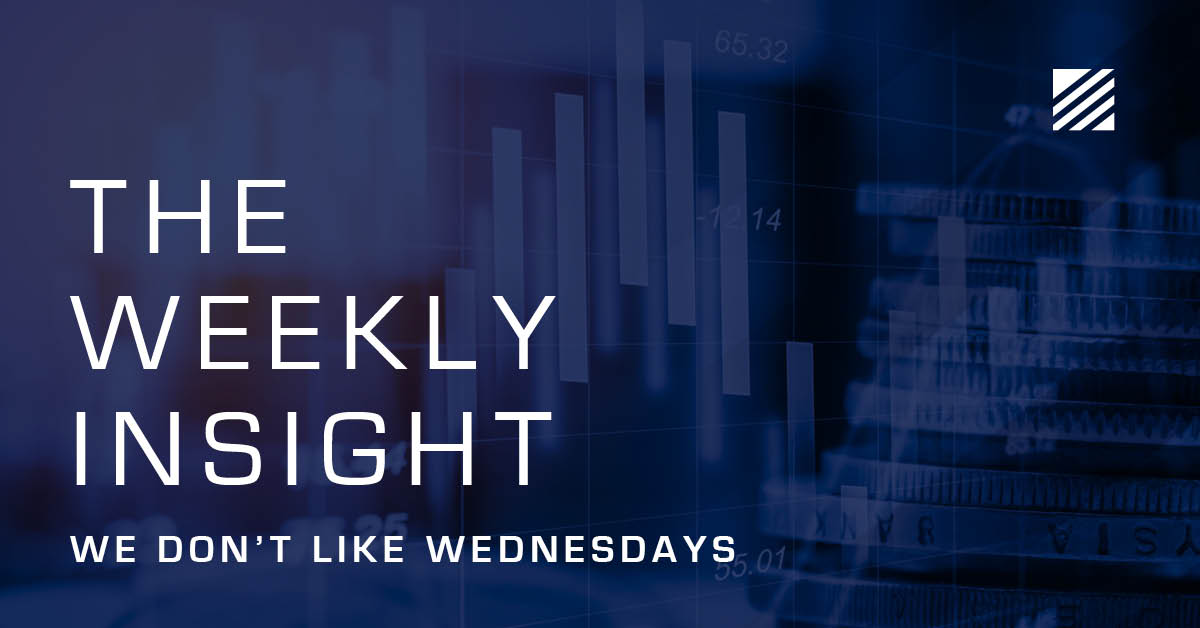 Before we jump into this week’s memo (and it’s a fun one!), we just wanted to take a moment to share some exciting news. Our colleagues at InsightCPA were selected last Friday as the “Best of Des Moines” for tax preparation by CityView, a local newspaper. Congratulations to Scott Manhart and the team in West Des Moines and Adel. InsightCPA was started just four years ago.  To go from zero to “Best of Des Moines” is quite an accomplishment!

There was a song released in the late 1970s by the Booomtown Rats (great band, by the way) titled “I Don’t Like Mondays”. Pretty common sentiment, we suppose. But 2021 is giving us a new theme: “We Don’t Like Wednesdays”. We have had a lot of Wednesday drama this year. Let’s look at the first four Wednesday’s of 2021:

We have discussed the first three – in depth – over the last few weeks. We are going to do the same with the GameStop/AMC/Robinhood debacle that is captivating Wall Street and Main Street. While it has not had a direct impact on portfolios (yet), last week may prove to be an important inflection point when it comes to the trust and faith the public has in Wall Street and the public markets.

Knowing our clients, we are going to guess very few of you spend much time on Reddit, which is where this saga began. Reddit describes itself as a “network of communities based on people’s interest” which has boards where people can post on nearly any topic. The board that kicked this off was one called r/WallStreetBets.

To understand the GameStop trade, you must understand r/WallStreetBets. r/WallStreetBets (further known here as WSB) was started by Jaime Rogozinski. Rogozinski said this week he started the forum because he was bored with “usual stock market advice” and was looking to form a community to “discuss the type of trades that would make a financial advisor’s skin crawl”. He described the approach in the Wall Street Journal this week as “more akin to gambling than spreadsheet analysis” and said the motto for the board was “YOLO” – short for “You Only Live Once”.

It is worth noting, however, that Rogozinski was kicked off the forum earlier this year after he began removing some white supremacist content and members. The backlash was swift, and he was booted by the forum’s moderators. He describes what is happening this week this way: “It’s a little like watching one of those horror films where you can see the bad guy slowly going up the stairs. You see this train wreck happening in real time.”

The culture of WSB is…crude…to say the least. It very much has a “locker room” feel and has been known to have some interesting associations. For example, Martin Shkreli, the former pharmaceutical executive and currently inmate number 87850-053 in the federal penal system was once a moderator of the forum. When he was sentenced for fraud, the members proclaimed their support for him.

Nonetheless, the forum has grown and is one of the largest and most commented on forums in all of Reddit. That growth multiplied this week (we will talk about that later). And you cannot say they have not had success. One of the early wins for the forum was their take on chip maker AMD, which provided excellent returns in 2017.

Many of you have likely seen the movie “The Big Short”. One of the main characters, played by Christian Bale, is Michael Burry who was one of the first to see the opportunity in shorting the mortgage market. In August of 2019, Mr. Burry announced that he had acquired a stake in GameStop. WSB users took notice quickly.

Then, in March 2020, at the height of the pandemic, WSB membership surged. Whether it was the extra time people had at home, the extra money in their pockets, or, notably, the lack of ability to gamble on sports or in casinos, people were turning to the stock market. Many were brought to WSB by Dave Portnoy, the founder of Barstool Sports who dove headlong into day trading during this time. His motto at the time: “Stocks only go up.”

The longs were having some success as the price of GME gradually rose. Then, just over a week ago, one of the short-selling hedge funds – Citron Research – tweeted posted a tweet that lit the fuse: 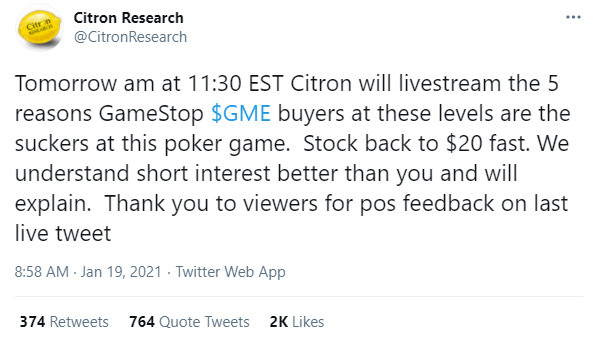 They poked the bear – but did not realize just how well this group could coordinate their activities. The buying started in earnest, and eight days later, GameStop stock broke out. Big time. On the day of the tweet, the stock closed at $39.36. By the end of the day Wednesday, it closed at $347.51. The short squeeze was on.

Every good controversy needs an enemy. The hedge funds weren’t bad for this role – but it was just too…obvious. Then, on Thursday, in stepped Robinhood.

First, let’s discuss just what Robinhood is. Founded not long after Mr. Rogozinski founded r/WSB, Robinhood was initially just a way to track stocks. That did not last long. After regulatory approval in 2013 to operate as a brokerage, they began to ramp up their efforts and released their first app, via the Apple app store, in late 2014.

The stated public goal: “the democratization of finance”. They named themselves Robinhood, after all, right? Steal from the rich, give to the poor. It’s all about the little guy!

Everyone reading this is smart enough to know that’s total hogwash. In fact, the people using Robinhood to trade their stock portfolio are not even Robinhood’s real client! Their real clients are groups like Citadel which “buy their order flow” – meaning they execute the trades for Robinhood. That’s where the money is at, and it is likely this has made Robinhood hundreds of millions of dollars. That’s how they give away “free trades”. As the old saying goes, nothing in life is free.

So, here is where the conspiracy business starts: as we noted, Robinhood sells their order flow to Citadel (so does pretty much everyone else, by the way). Citadel has a large stake in a hedge fund that was shorting GME. A day after this started, Robinhood froze all trading in GME. The conspiracy assumes they did so on behalf of Citadel which allowed their hedge fund buddies to get out and not take a hit.

First, let us say this: this did really expose the underbelly of finance. Main Street investors are talking about things they have not ever discussed like order flow and float and the Depository Trust & Clearing Corporation. Sunlight is a very, very good thing.

But sometimes the boogieman is not hiding under your bed. This seems to be the case with Robinhood and GME. Stopping trading in GME was a massive mistake and created long-term reputational damage for Robinhood. But they likely did not have a choice. Whether they wanted to admit it or not, they likely had a serious liquidity problem and had the potential to get crushed. That is why they had to borrow roughly $600 million on Thursday. Once the funds were in place, trading started again. But the damage was already done. r/WSB and new acolytes already had the evidence they needed: Wall Street is trying to crush the little guy.

This is a story without any real good guys. One could argue what the WSB members were doing was market manipulation. In fact – it absolutely was. And the coordination of it was on a public message board.

On the other side, they were not doing anything Wall Street hasn’t done for years. They just do it in suits and ties on CNBC and not behind a monitor in their mom’s basement. As someone said this week, “The bunny got the gun.”

As we noted to you earlier in this memo, the membership of WSB has expanded exponentially in the last week. It has millions of new members since this started. Guess what those members are doing? For a stock to be trading at 68x book value it must have someone buying the stock at that price. Who is doing that? Those that are late to the party and want to get a piece of the action.

For those old WSB members who bought GME at $3 earlier this year, this is going to work out very, very well. Good on them. They figured it out. For the masses that came in and bought it at $350? This will not end well. They are the unintended victims of this process.

The other (probably deserved) victim? The reputation of Wall Street. As we noted above, the conspiracy theories about the actions of Robinhood and their partners are a bit…exaggerated. But what the WSB crew did this week was pull the mask off Wall Street and show them for what they are. And they showed it was possible to beat them at their own game.

This is, essentially, the “internetization” of finance. The same forces that have driven social media to its zenith, boosted political polarization, etc., are at play here. There are positives to this, no doubt. But there are a lot of uncertainties. Which company or hedge fund is next? What motivates the mob? It seems a hatred for the hedge funds did it this time. What happens if they decide they are mad at Jeff Bezos and decide to short Amazon? Or target Warren Buffett. This experiment really did not impact many “real people”. The next one may not be so painless.

The likely result? More regulation. Like it or not, it is much easier for the “big boys” to pool their resources and lobby the members of Congress and executive branch officials they have been financing for…well…ever. The WSB crew – or those like them – do not have much representation in Washington. The rules will continue to protect those that pay for those who write them.

What does this mean for you? Nothing right now. We do not have any exposure in any of the positions being targeted today. But it does mean we are going to have to pay a little more attention to the Redittors of the world to make sure we’re playing defense on that front as well. It seems there will always be another new wrinkle!