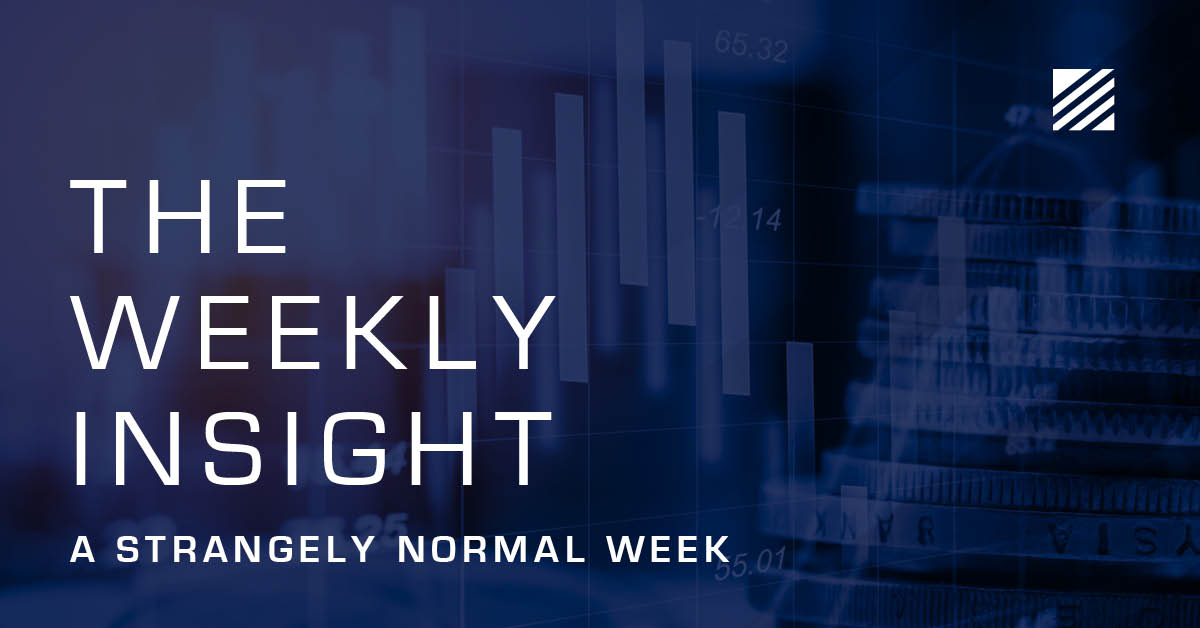 We talked last week about all the drama we have seen in the markets (and around the country) for the first four weeks of the year. Capitol riots, impeachment, inauguration, and Reddit’s attack on Wall Street. So, what was the drama last week? Nothing. Finally! Yes, we are still battling a pandemic. And there is significant action happening on Capitol Hill regarding the stimulus. But in the sense of something unexpected and dangerous? Nothing. It’s a good feeling!

If the last 11 months tells us anything, we cannot expect the relative quiet of last week to become the new norm. Normal is strange and strange is normal at this point. But we’ll take advantage of this “strangely normal” week to peel back the onion a bit and focus on the numbers instead of the drama.

Two weeks ago we noted, with 13% of S&P 500 companies reporting, 86% were posting “earnings surprises” and we were on pace for an earnings loss in Q4 2020 of 4.7%. The positive news has continued as more and more companies are reporting earnings.

As of Friday, we now have earnings reports from 59% of S&P 500 companies. We are still seeing a large majority with earnings surprises (81%), but the most interesting metric is this: the blended earnings for the S&P as a whole right now are showing a 1.7% earnings growth for the quarter. Given that on December 31st the estimated earnings decline was 9.3%, that is a significant surprise to the upside.

We have talked in the past about how markets nearly always clear the bar put in place by the “estimates”. In fact, the five-year average is that posted earnings beat estimates by 6.3%. Today, that number is 15.2%, which is a significant departure from the norm.

The biggest surprises so far this year have been in financials, technology, and communications as you can see from the chart below. All three are well represented in our core models (Growth, Conservative Growth, and Balanced) and our Insight Dividend model. This has led to an optimistic start for the year for all models. 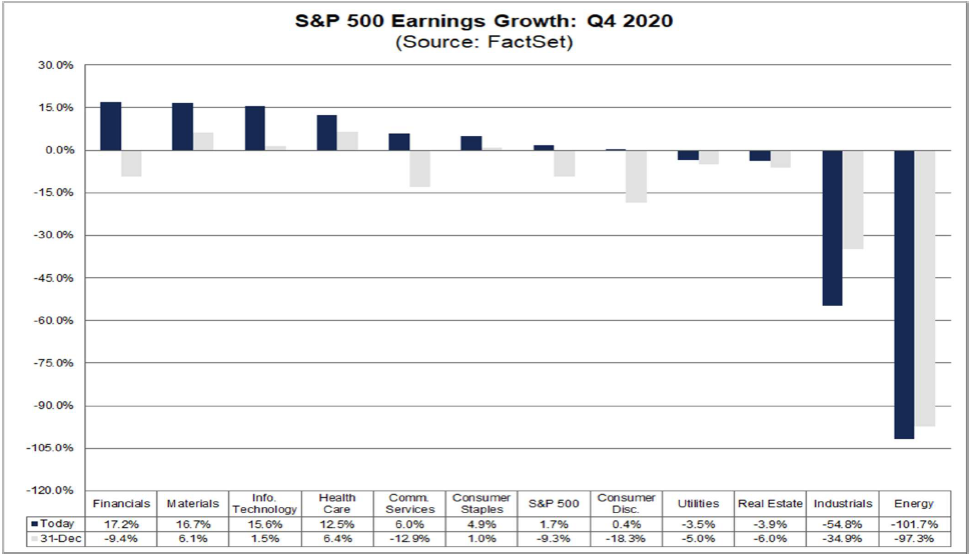 In what seems like another departure from the recent norm, we saw the Senate do something last week that was strangely refreshing: they worked on legislation!  That’s right, the Senate actually debated nearly all night on a budget resolution that paves the way for Biden’s stimulus legislation.  Yes, the vote ended up being along partisan lines – with the tie breaker cast by Vice President Harris.  But it was a debate dominated by policy differences, not vitriol.  Given the tone of D.C. for the last few months, it was nice to see them doing the hard work.

The debate was largely what we would expect:  Democrats wanting to move the ball for Biden’s bill and Republicans arguing we are spending too much money too soon after the $900 billion stimulus passed in December.  While the final bill was a partisan product, the sausage making up to that point had some refreshing bipartisanship.

By bringing the bill forward as they did, the Democrats triggered a process known in the Senate as a “Vote-a-rama”.  This kicked off 15 hours of debate and 45 amendments offered to the bill.  When you look inside the amendment offered, there was some interesting bi-partisan support. For example:

There was, of course, some politicking as Republicans used the opportunity to force Democrats to vote on some tricky issues.  There were votes on Keystone XL, school funding, etc.  It is fair to say Democrats used the same tactics when they were in the minority as well, so it should not come as a surprise.

In the end, this bill does not mean we have a stimulus package.  Instead, it means they have approved the funding for a stimulus bill, but still must work out the details.  Right now, it looks like a mid-March timeline for passage of the actual legislation.  But the markets saw this as a positive sign as they have been banking on additional stimulus for the last few weeks.  It is a big reason the market was up on Friday despite a lackluster January jobs report.

We started these weekly memos last year as a response to the virus.  At the time we provided regular updates on infections across the nation and the world.  What we learned from the experience is that, while we are certainly not epidemiologists, the data does not lie.

There is a big difference between the number of vaccines distributed to states (59,307,800) and the number of doses given to people.  Theoretically, this is a positive sign for the weeks to come.  That is, however, dependent upon states’ abilities to deliver the vaccine to the public.

Also notable is that only 9.1 million people (2.7% of the U.S. population) has received both doses of the vaccine.  That is probably the most important statistic and one we will be watching closely.

The Biden administration’s goal is to administer (note the distinction between “administer” i.e., shots in arms vs. “distribute”) 100 million doses in the first 100 days of the administration which ends on April 30th.  While this would be significant progress from where we are today, it is important to note it leaves us a long way from the end goal.  If we hope to vaccinate 75% of the U.S. population, we will need to administer nearly 500 million doses, so we will be just 20% of the way to completion by April 30th.  At this point we are likely looking into the fall before the vaccine process will be largely complete. 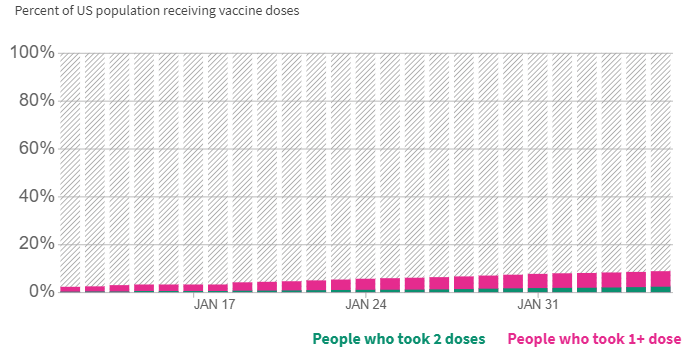 One final point on this process:  getting the United States population vaccinated is not the end of COVID-19. We have seen some estimates that it may take as long as seven years to get the world vaccinated. Vaccine distribution in undeveloped countries is substantively more difficult than it is here. The vestiges of COVID will linger in the international community – and have some sort of impact on the world economy – for some time.

It seems like “Tax Time” snuck up on us even faster this year – no doubt due to the COVID-related delay in tax filing deadlines last year.  Barring any crazy developments in the world next week, we are going to take some time to address common tax questions – especially those coming from the various stimulus bills – we are hearing from clients.  If you have specific questions you may want answered, please send us a note by clicking HERE so Scott Manhart and our team at Insight CPA can help address them in next week’s memo.