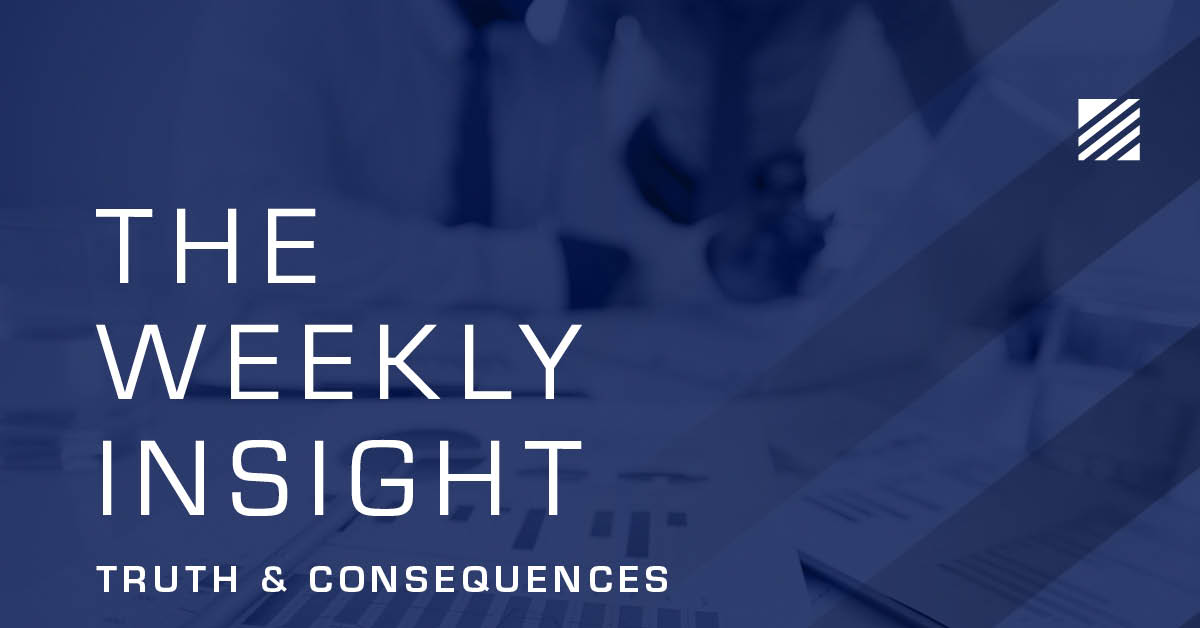 The problem with writing a weekly newsletter is that we’re putting ourselves “on the record” repeatedly. We’re regularly making statements about what we think the future might bring and, bluntly, we’re not always right. Take, for example, this statement we made about COVID-19 on March 1, 2020 (when there were 66 confirmed cases of COVID in the United States):

“The worry we continue to have is what happens when COVID-19 makes a breakout in the United States.  It’s likely to happen, but we would assume our healthcare system is much better equipped to address the issue than China has been.”

Our healthcare workers have done tremendous work in very difficult circumstances. But it turns out padlocking people into their apartment buildings is a much better virus containment strategy than what we were able to come up with in a free society (if you assume China is even being honest about the spread of the virus).

When we re-read those old memos and see the things we’ve said that were wrong it makes us really…frustrated. But we also know you rely on us for an honest take on where we think things are going. Sometimes we’ll be right…sometimes not. But at least you’ll know how we got there.

We say all of this because this week we’re venturing off into the “what if” world. Much of what we’re about to discuss is speculative. But these are the issues we’re contemplating around here as we continue to manage your portfolios.  (Or, if you’re a golfer, we’re calling for our mulligan even before we hit the ball!)

You may recall that we had a jobs beat last month as well when it was announced the economy had created 938,000 jobs in June.  What was notable about that report was that the unemployment rate went up.  That was a clear indication that folks were getting back out into the workforce and starting to look for jobs again.

If the broad report is positive, the details are even more so.  The leisure and hospitality segment of the economy – the area that has had the toughest time finding workers – had a breakout month. 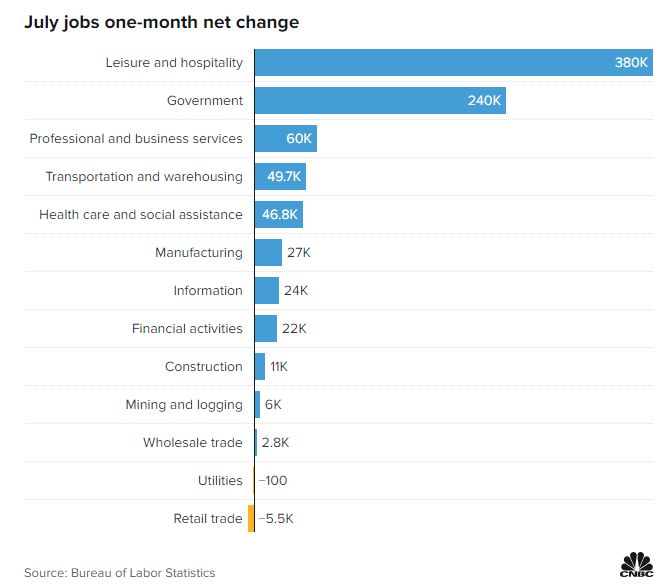 Here’s where we get into the “what-if” part of the memo.  We’ll start by reiterating that we don’t know the final answer – but we do know this is all worth paying attention to.

You’ve heard us talk for a long time about the federal unemployment benefits which have been provided during COVID.  We could debate for days whether or not they were too much or too little, too long or too short.  We would say it’s obvious they have had a significant impact on employment.  People aren’t dumb.  When you can make the same or more to stay home than you can working, it’s not a terrifically difficult choice.

But that’s about to come to an end.  The federal unemployment benefit supplement (currently $300/week – down from $600/week) is coming to an end on September 6th.  Per the Labor Department, more than 9 million people were receiving this benefit in mid-July.  Current expectations are that nearly 7.5 million people will still be receiving the benefit when it ends – abruptly – in less than a month.  Without that supplement, the average state unemployment benefit is $341/week – or just under $18,000 per year.  That’s likely not enough to stay home.

At first blush, the capitalist might say this is good news for an economy struggling to fill jobs.  There is no question that part of the inflation we’ve seen in recent months has been due to rising labor costs as employers try to compete with unemployment checks for labor.  A market filled with many millions more job seekers should tamp down that issue.

But, as with anything this complicated, it’s not that easy.  First, this is a massive number of people losing a significant source of income.  For comparison, when we ended the Federal unemployment benefit after 2008, we stopped payment to just 1.1 million workers – nearly 7x less than the current expectation.  And these are consumers that buy products as well.

Right now, per CNBC, there is little appetite in Congress for extending this program.  We get it.  There was a clearly defined program and it’s coming to an end.  That is no doubt one of the reasons for the big spike in employment numbers we’ve seen in the last two months.  People know their checks are running out and they’re looking to find a job to replace the lost income.  That’s the free market economy at work.

But there is one boogeyman to worry about: Delta Variant.

This gets to one of those “maybe we are wrong” moments.  We’ve talked for the last few weeks about our hope that the consequence in the U.S. of the Delta variant would be like that of the U.K.:  rapidly rising cases, but minimal death and hospitalizations.  We continue to hope that is true, but it is yet to be determined.

The question here becomes this:  what will be the government response?  As we noted above, there is no sign the government intends to extend the current unemployment benefits.  But there also hasn’t been much direction on what they intend to do regarding restrictions and closures surrounding the Delta variant.

We titled this memo “Truth and Consequences”.  The truth is this: we continue to be in uncharted territory.  At this moment, we remain substantially positive about the economy.  But in the last few years you’ve heard us talk over and over (and over, and over) about the impact government has on our economy.  The consequence?  The decisions from Washington over the next 4 weeks will have a huge impact on whether or not the job market successfully absorbs these new workers or we’re back to more federal support programs.

This is why we took some profits in portfolios in July.  And why we will continue to remain diligent over the coming weeks and months.  Things really are getting better (economically), but we can’t take our eye off the ball.

Our Annual Insight FairFest event is coming up this Saturday from 11:00AM to 2:00PM at the Iowa State Fair.  For those of you who are planning to attend, we wanted to add some additional detail on our plans.  We know there is a lot of attention being paid to COVID once again, and we are making some changes to accommodate.  They include:

Finally, while we will be serving food from 11:00am – 2:00pm as we do every year, we would point out that we always see the biggest rush of guests from 11:30am – 1:00pm.  If you would like to attend when the venue will be less busy, we would encourage you to come early or late to the event.

We are very excited to see folks this weekend.  But your safety and that of our staff is paramount.  If you have any questions or concerns about this, please don’t hesitate to let us know!