The Weekly Insight: The August Lull 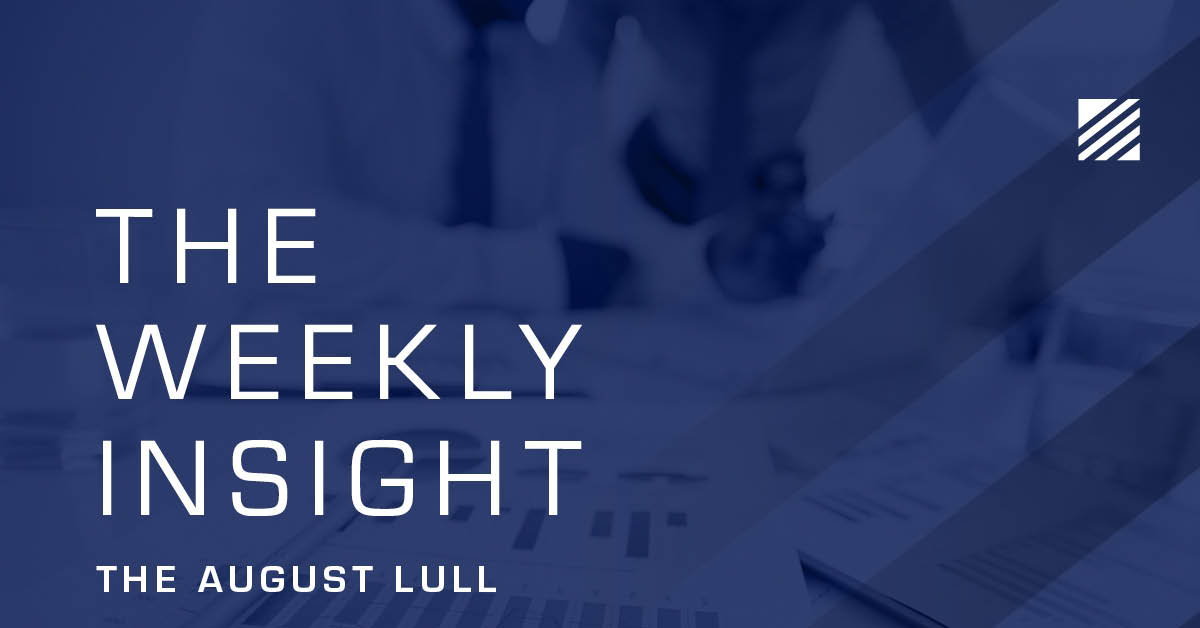 It’s hard to believe, but summer is entering its last full month. In just over three weeks, kids will be going back to school (we hope!). The State Fair is almost here (get your reservations in!). And – historically – things start to get quiet on Wall Street and in Washington. Congress takes their “August Recess” and Wall Street bankers get away for a bit before the fall action begins.

But, since it’s been a long time since we’ve seen a “normal” year, we doubt it will be that easy! There are a few – big – items Washington needs to handle before they run back to their districts. And there’s still plenty of action to drive things in the markets. This week we’re going to look at the issues that may keep us from seeing a traditional “August Lull” and what might move the markets in the next 30 days.

We’ve hit on this topic for a few weeks now – but it remains an important thing to keep top of mind.  We’re starting to see policy makers react to the rising level of cases in the United States.  For example:

As you know, we’re not virologists.  In the end, we need to listen to our best scientists to try to contain this virus.  But when it comes to the market, we do think logic can be a very strong weapon.

In a conversation about the virus this week with a client we were reminded about one of our favorite quotes about statistics:

“There are three types of lies:  lies, damn lies, and statistics.”

The point of this quote?  You can use statistics to say whatever you want.  For example, if we wanted to scare you to death about COVID, we could show you this chart about rising COVID cases and exclaim that cases have skyrocketed.

But if we wanted to tell you everything was just fine and dandy, we’d show you this chart and point out that deaths were still at one of their lowest levels since the start of the pandemic.

The real question is this:  what is the inflection point that would cause the government to shut down the economy once again?  Is it tied to cases or is it tied to death and hospitalization?  Is it nationwide – as we saw in March and April 2020 – or is it localized to states and municipalities that are hardest hit?

Right now, the market is shrugging this off.  All major indices are positive during the last month – a time when COVID infection rates have nearly quadrupled. 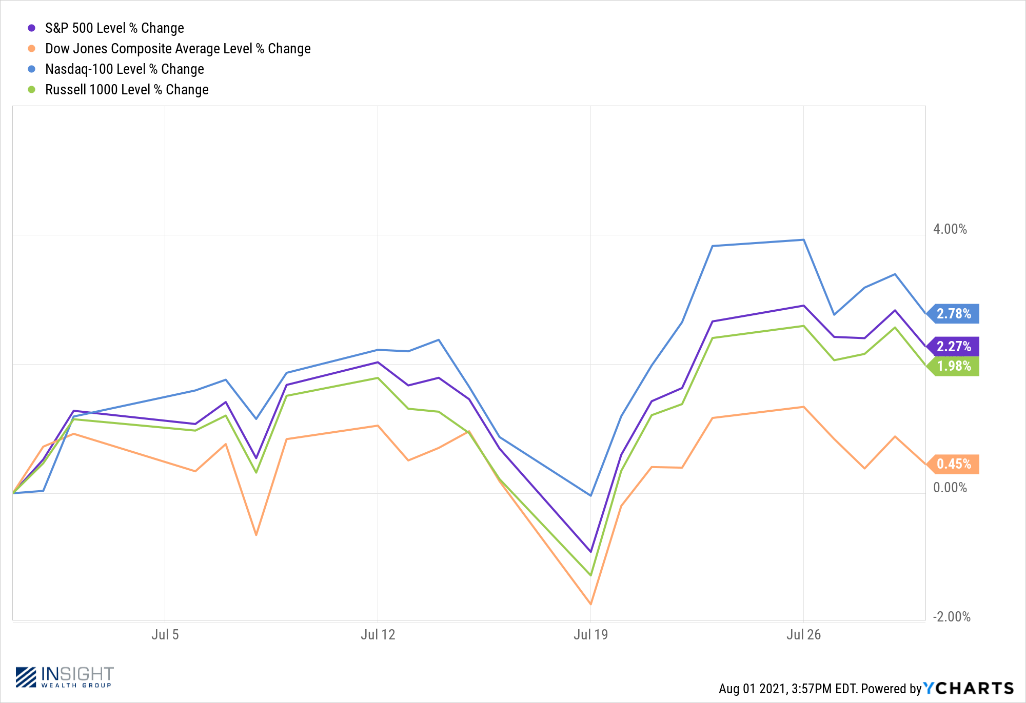 Logic would tell us the data set around death and hospitalization is what should matter most.  And that those numbers should remain manageable.  But logic hasn’t been king during the Age of COVID.  So, this is a big issue to watch in the coming weeks.

The joke in Washington for the last several years has been that “This is Infrastructure Week!”.  It’s been the joke because both this Administration and the last have tried hard to push infrastructure bills and they have largely gone nowhere.  It’s sad because this is one of the few areas where both Republicans and Democrats agree the Federal Government should engage.

What they don’t agree on are the specifics.  Republicans want a traditional “roads and bridges” bill, while progressive Democrats want a much more expansive bill that focuses on anti-poverty and climate change priorities.

The first step in this battle is expected to move through the Senate this week – a bi-partisan infrastructure bill which has the support of all 50 Democrats and 17 Republicans.  This bill would spend $110 billion on bridges and roads, $39 billion for public transit, and $65 billion on broadband access, amongst other things.  The total cost is $550 billion above expected future federal investments in these programs and would be paid for by “repurposed federal funds, delaying a Trump-era Medicare rebate rule, and a mix of accounting maneuvers”. (WSJ, Andrew Duehren, August 1, 2021)

Unlike previous bills, passing this bill out of the Senate isn’t the hard part.  Instead, the House has the potential to play deal breaker.  Speaker Pelosi and the progressives in the House have said they will not pass this bill if they don’t also receive a $3.5 trillion reconciliation bill that includes their anti-poverty and climate change proposals.

The Senate will work to pass that bill – entirely on partisan lines – after the infrastructure deal is in place.  But it’s going to take time.  And it isn’t going to be easy.  So, while this may be “Infrastructure Week” again, we don’t expect a resolution for some time.  Especially considering everyone in Washington is getting ready to go on a month-long vacation.

We haven’t spent much time on earnings in the last few weeks, even though 59% of S&P 500 companies have now released Q2 earnings.  The reason?  It’s been – as expected – a very positive set of data.  88% of companies have beaten their earnings expectations which would be the highest EPS “surprise” number since 2008.  Simply put, things are going well.  And not just in a few industries – but across the board. 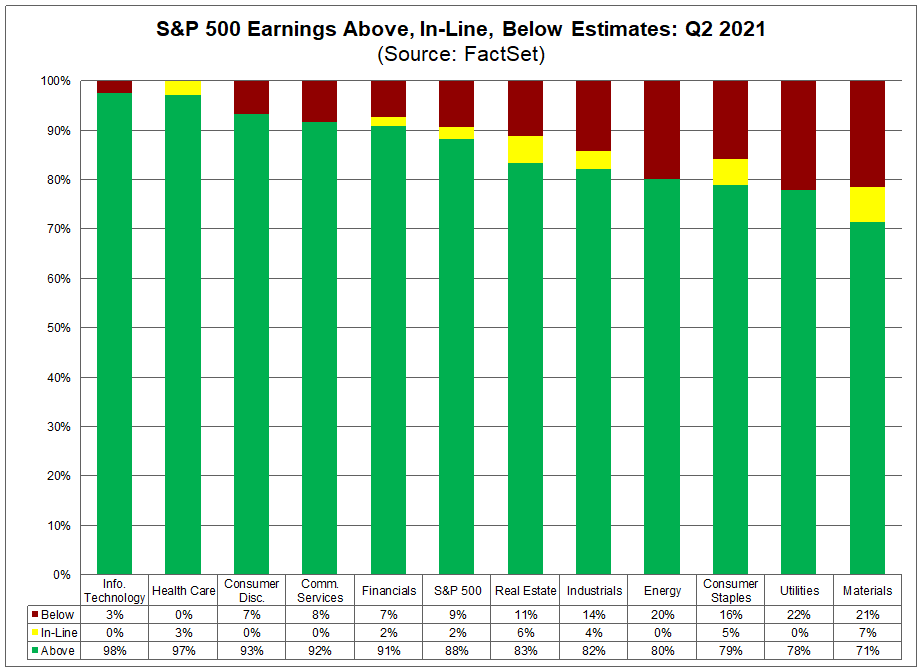 At this point, it would take some pretty catastrophic failures to change the dynamic of the Q2 earnings season.  That gives us some nice breathing room as we head into the fall.

It should also be noted that this has brought the forward P/E number down to 22.52x for the S&P 500.  While this is still a bit pricey historically, it’s much better than the 25x+ we were seeing earlier this year.  This number should continue to drop in the coming weeks as we see the rest of the S&P 500 report earnings.

That’s it for this week.  We hope this finds you well.  And we’d encourage you to RSVP for our Iowa State Fair event on August 14th if you haven’t already.  We’re excited to get the crew back together after COVID closed the Fair in 2020!