The Weekly Insight: Dig Past the Headlines 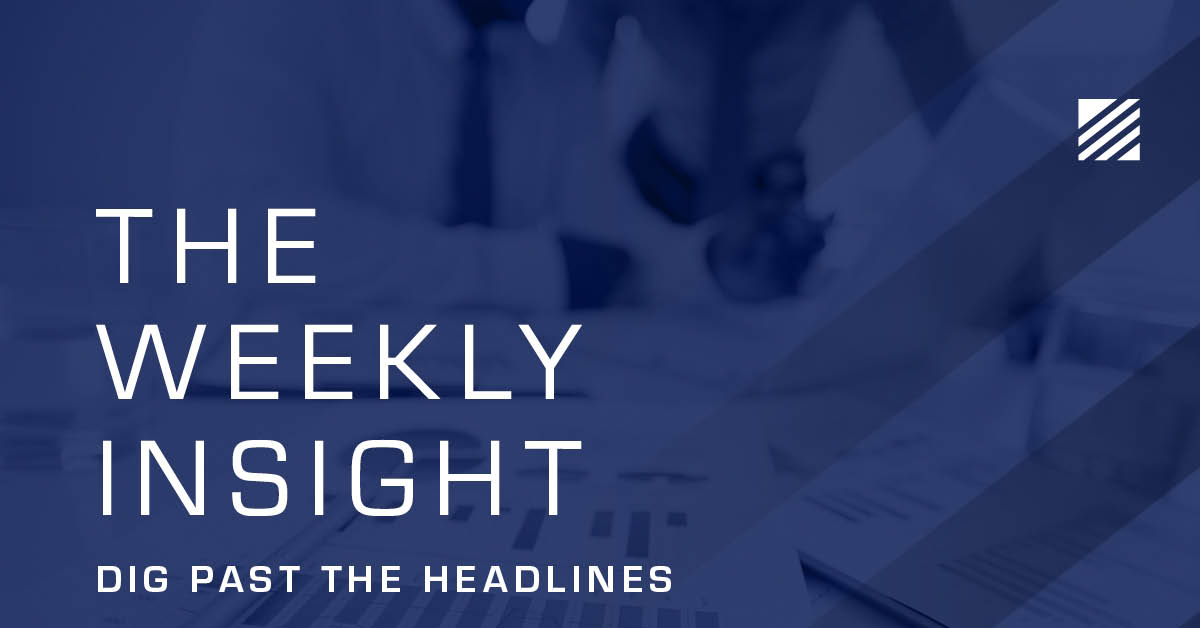 We don’t think we’re in the minority when we say we’re getting pretty sick of click-bait journalism. OK – we get it – you get paid when people click on the link to your article. So, everything has to be dramatic. But the drama is getting old.

The problem is there are some important stories to tell out there right now. They get obfuscated, though, by all of the junk. Take this headline on YahooFinance from Friday:

“Scientist: ‘Sun is going to rise at some point.’”

“Parent: ‘Kids will likely whine at some point.”

But what if we told you much of the market had already experienced a (stealthy) pullback?  Or that, while COVID cases are rising, there is a hard data that shows it may not have the impact it had last year?  Or that, while rising inflation is a real thing, it’s still below the long-term trend?  These stories aren’t being told in the media today, and hide behind the scare tactic veneer that keeps people clicking on links, tuning into cable news, etc.  This week we’re going to pull the curtain back and show you a few things we’re paying attention to that don’t drive clicks but do impact each and every one of us.

One of the oldest adages in our industry is “Sell in May and go away.”.  The theory is that investment returns in the summer suffer and you should get out of the market before it happens.  As with any generalization, there is a level of truth to it, but it doesn’t tell the whole story. 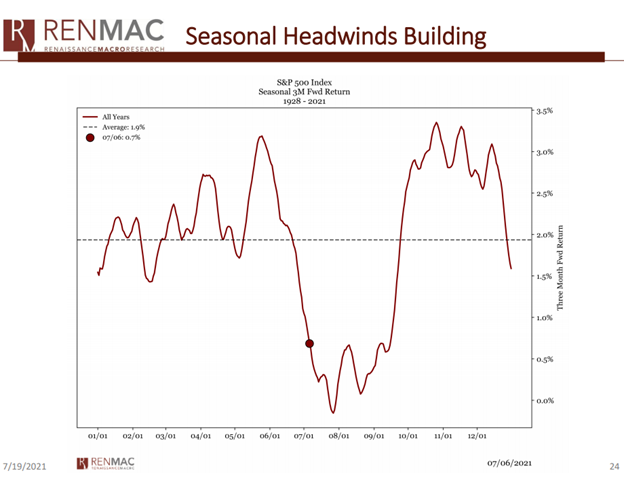 And there is no perfect data set.  What if you pulled the “Sell in May” trick last year?  You would have missed a historic opportunity. 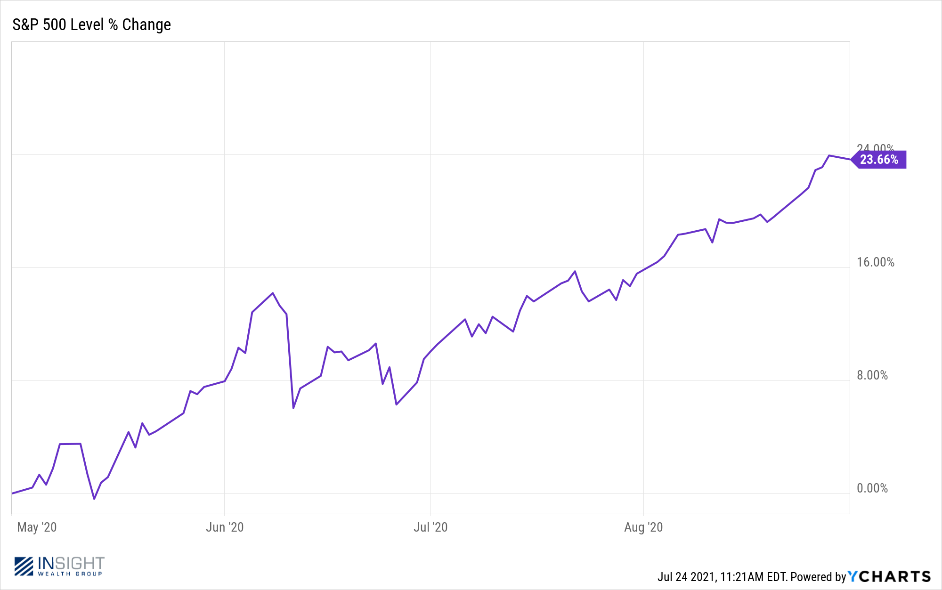 But let’s say you focus on the first chart.  Now would seem to be a particularly bad time to invest capital in the market, right?  Especially after headlines like this on Friday:

The problem is this doesn’t tell the whole story because the S&P, Dow, & Nasdaq aren’t the whole market.  In fact, they’re just a fraction of it.  And just a fraction of those big indices are driving returns.  You’ve heard us talk about the “market cap weighted” nature of the S&P.  If you peel out that weighting and look at an equally weighted S&P index, it’s performing significantly below the broader market.  And if you take it even further – to the Russell 1000 – the average company in the Russell 1000 is down over 11% from its 3-month high. 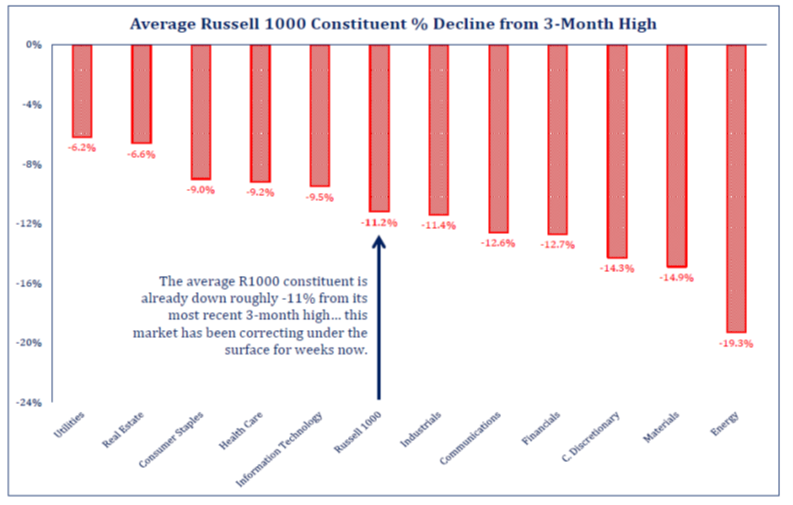 So, while all the media is talking about peaking markets, most of the market has experienced a “stealth” correction.  When you combine this with the fact that there is an amazing amount of dry powder on the sidelines, we think this means there are some opportunities to deploy capital today.

You all know the Buffett axiom of “being greedy when others are fearful”.  There is still fear in the market.  For example, during one of the greatest bull runs in history (and one of the worst environments for bonds in history), investors have been piling into bonds – not equities. 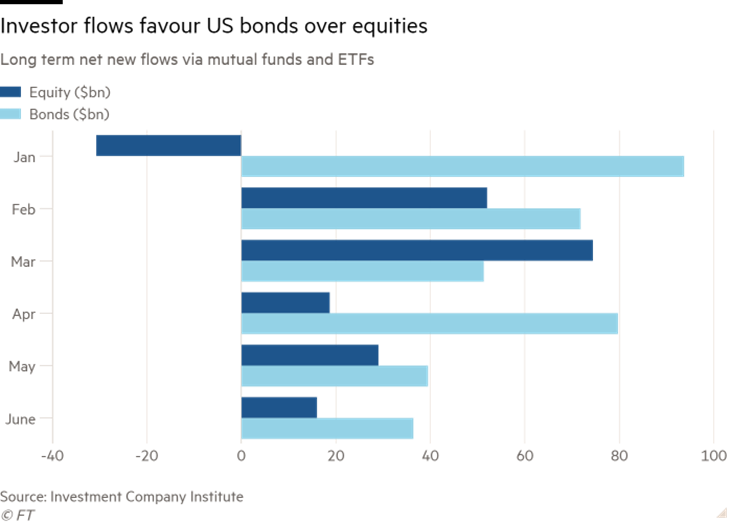 Those of you in our core portfolios will start receiving quite a few trade confirmations this week (or already have).  We made the decision that this divergence created an opportunity to rebalance portfolios.  It allowed us to take some risk off the table in our more appreciated portions of the portfolio (think big tech and energy) and reallocate to areas that offer the most opportunity for growth.  We’ll continue take advantage of these opportunities if they present themselves.

To appropriately talk about the virus these days, we think you have to announce it like a dramatic sequel to an action movie.  Think of the announcer with the deep voice who says Rambo: First Blood…Part TWO.  Only this time it’s Covid…DELTA VARIANT.

The news on the Delta Variant is certainly dramatic.  And it should be.  Any time people are dying from this preventable disease, it is a tragic story.  But, yet again, the headlines drive the scare factor home.

We’ve said for the last seven months that one of the key “pillars” to our argument for a strong market in 2021 was a recovery from the virus.  Thus, there is no question we take this new strain – and the surge in cases – very seriously.  But our friend Phil Kosmala showed us some data this week that we hadn’t heard in the news.  And, frankly, it’s optimistic.

This data looks at the U.K. and their experience with the Delta Variant.  For reference, the U.K. has had very similar success (or lack thereof) in getting vaccines distributed as we have here.  The UK started dealing with their Delta Variant surge roughly four weeks before the U.S.  As you can see, when relating it to the initial growth of the virus last year, Delta is spreading much more quickly. 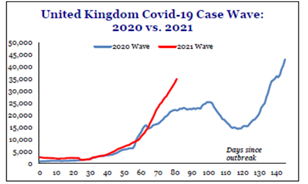 That’s the scary part of the story – and the one the media loves to talk about.  But it’s the next two parts of the data which, in our opinion, are the most important:  hospitalization rates and deaths from the virus.

The curve in both is significantly more muted than we saw last year.  This is likely due to vaccinations – especially amongst those most vulnerable.  It remains to be seen if this experience will be mirrored here at home.  But, if it is, this is the argument against shutting down the economy again.  We’ll be following this data very closely.

We’ve been debating the inflation story in these pages for months now.  First, let’s get this out of the way:  inflation is happening.  In fact, CPI and PCE measures of inflation have only been this high twice since the 1970s. 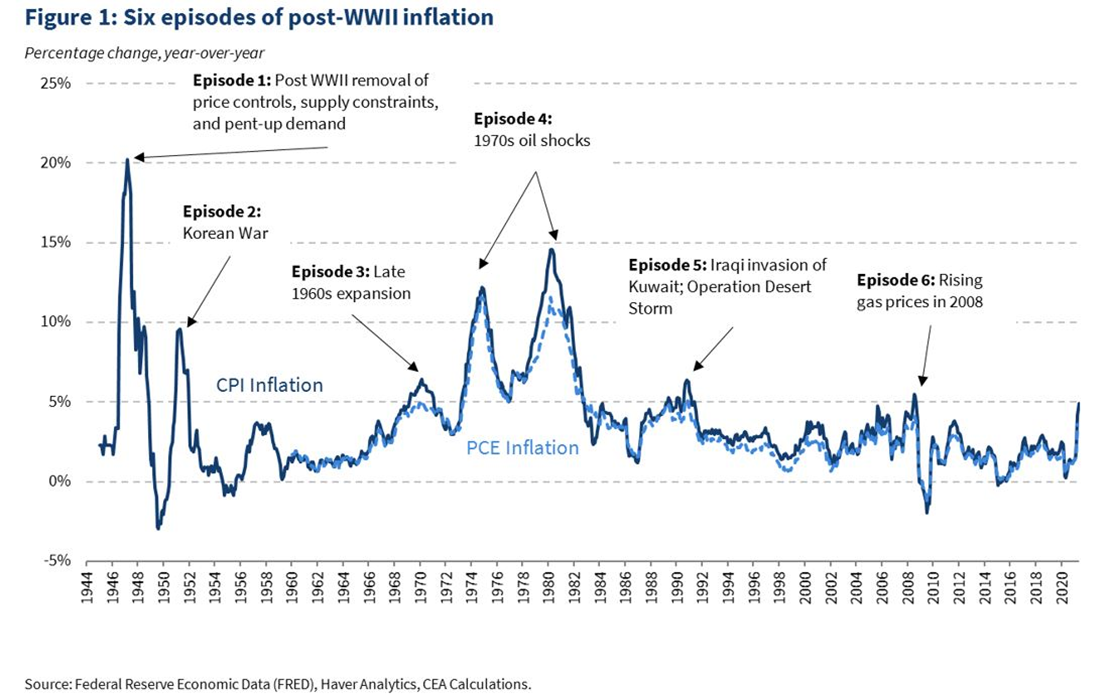 But, again, we’re debating the wrong issue.  The question isn’t whether inflation is here.  It is.  But remember how they measure inflation:  the change from one year ago.  And, given the supply constraints coming out of a shut down economy, this shouldn’t surprise us.  But where is this inflation coming from?  And where do we sit on the long-term trend for consumer prices?

But here’s the kicker:  when you remove those items, long-term inflation is actually below the pre-pandemic trend line!  We haven’t seen that headline in the paper lately. 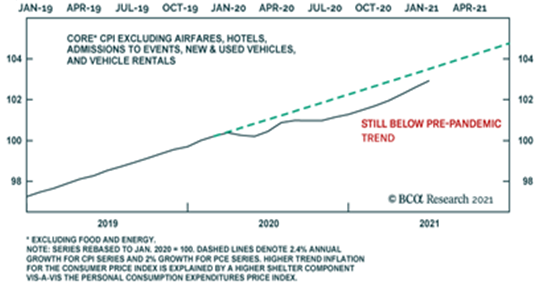 We’ll leave it there for this week.  We hope you have a wonderful week.  And just remember – it’s probably not as bad as the headlines want you to believe!