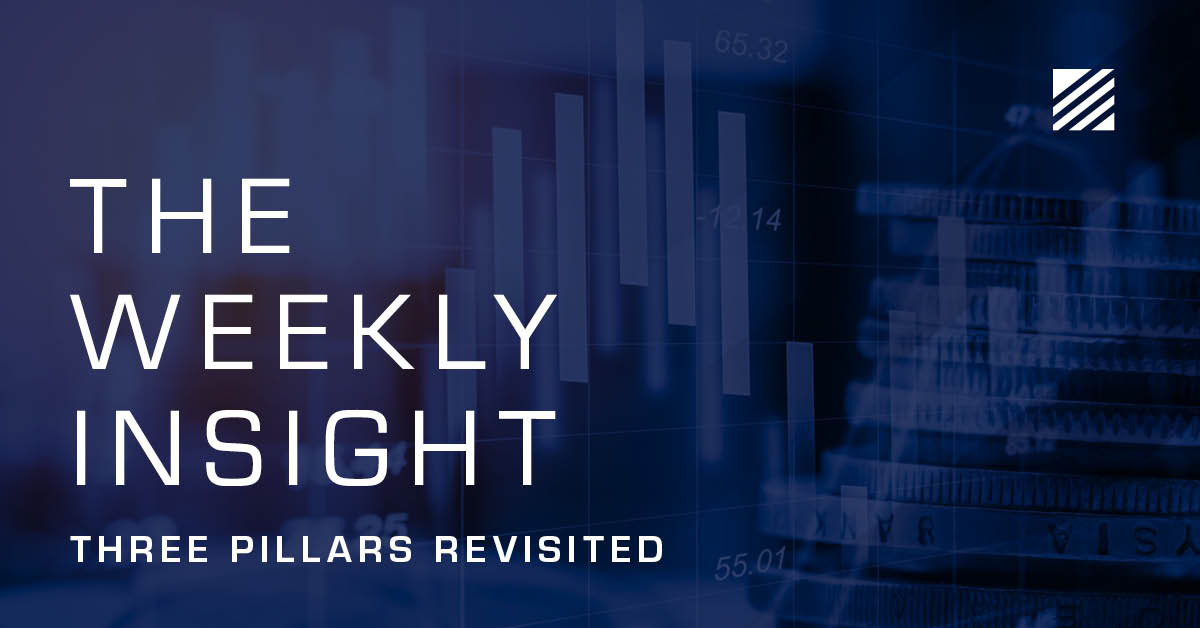 It was a good week in the equities markets last week as the market absorbed the positive news on the Omicron variant (very contagious, not as virulent) and began to reset its expectations for a positive holiday season market. The S&P 500 was up nearly four percent, on the back of positive returns for the big names in the index. Names like Facebook (+7.47%), Microsoft (+6.05%) and Google (+4.32%) lead the charge.

“So, while the market has retreated a bit from its highs, the overall picture remains positive. The main thesis this year will continue to revolve around COVID recovery, low interest rates, and federal stimulus. If all three of those pillars remain intact, we remain positive.”

The volatility in the markets over the last few weeks has been entirely about how “intact” those pillars remain – especially the COVID recovery and interest rate pillars. So, as we move into wrapping this (very positive) year in the market, we thought it might be worth checking in on these items and see what they can tell us about the end of this year and the start of 2022.

If your definition of a COVID recovery is getting cases to zero, then we have largely failed on that front this year. The Delta wave was the second largest peak since the onset of the virus and our current wave (Omicron?) is the third. 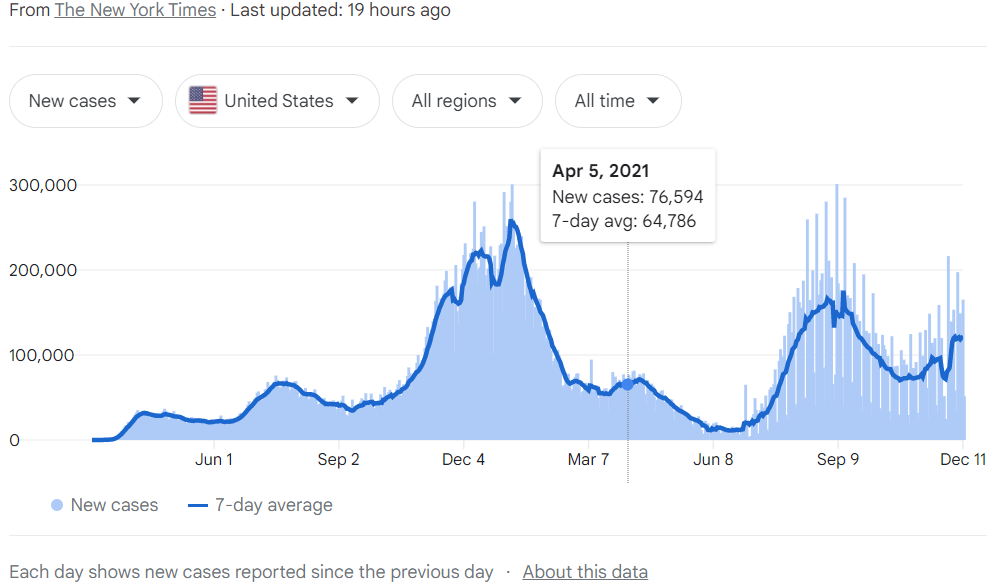 The most interesting statistic is that, while cases have risen almost exactly 50% over the last 30 days, deaths from the virus have not. In fact, the number of deaths from this current wave peaked on Thanksgiving Day (a 7-day average of 1,427/day) and have now dropped 15% since then.

The simple truth is that the goalposts have moved. COVID “recovery” is no longer defined as beating the virus. Instead, it is defined by living with it. And data on mobility shows that Americans – and those around the world – are in fact living with it. That is good news for the economy and the market. 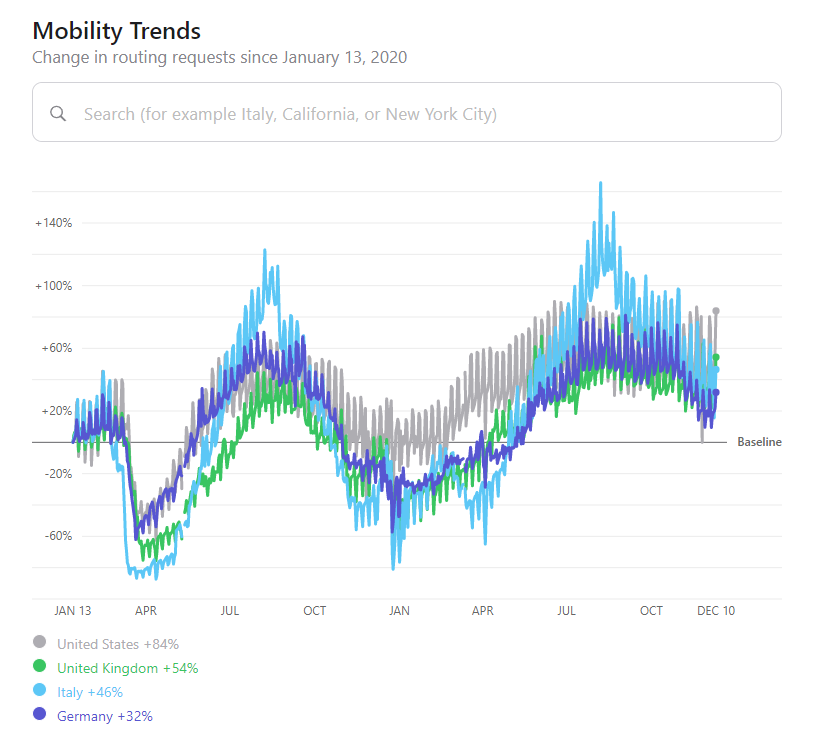 The final tale on this virus is not yet written, however. The market is optimistic about what impact Omicron may have on economic activity. The combination of the news that the Pfizer booster has a positive impact on infection rates and President Biden reiterating there will be no economic shutdown looks positive. But the data on hospitalization and death rates will be the ultimate telltale sign. We will be watching it closely over the coming weeks and months.

We are (seemingly) past the federal “stimulus” portion of the COVID response. When we started this year, the question was whether the federal government was going to provide enough capital to keep the economy flowing. Not only has that question been answered (in the affirmative – by a longshot!), but now we have moved beyond that to larger spending and taxation conversations that, while important to the economy, are not necessarily the life and death issues we were facing twelve months ago.

We have beat to death the conversation about how much – and how quickly – Congress responded to COVID. We are clearly not big fans of unlimited (and largely unfunded) government spending, but it was necessary., and it did its job.

The issues today are less dramatic, but no less important. The debt ceiling discussion happening in Congress right now is not sexy, and it is certainly not popular. But screwing it up would have dramatic consequences. Thankfully, it looks like there is a bi-partisan solution brewing and we should be able to move beyond that issue without much drama.

The next big issue is the potential tax increase being proposed. Bluntly: we will believe it when we see it. There really does not seem to be the votes necessary in the Senate to do anything too costly.

In the end, Congress has succeeded with this “pillar” this year. The remaining risk is they screw up one of the fundamental issues – like the debt ceiling or tax increases. But that does not seem to be the case today and we remain confident about the long-term outlook.

What the Fed will do with interest rates is, in the end, the biggest issue facing us today. As we discussed in last week’s memo, the expectation of the market was rocked recently when Fed Chairman Powell suggested they may choose to raise interest rates sooner than originally anticipated.

That issue is going to come to a head this week when the Fed meets and releases its minutes on Wednesday. Expect some sideways volatility on Monday and Tuesday until we have some clear answers on Wednesday at 1:00PM Central.

What is really at stake on Wednesday? Two issues:

Right now, the market is anticipating a move to a more rapid tapering and interest rate hikes. Any indication that will not be true will result, we believe, in positive movement for the market. A move to faster rate hikes will not necessarily crush the market, but it may be a reason to press pause on the current market rally.

You will see an in-depth discussion of the Fed’s minutes from us next week. In the meantime, know this is the main issue to watch. And – while rising rates is certainly in our future (eventually) – the pillar of low interest rates remains a fact for the rest of the year. As we have said many times in these pages, the first interest rate hike does not mean the end of a bull cycle in the market. But it is a sign that we need to be more cautious going forward.