The Weekly Insight: The Wait Is Killing Us 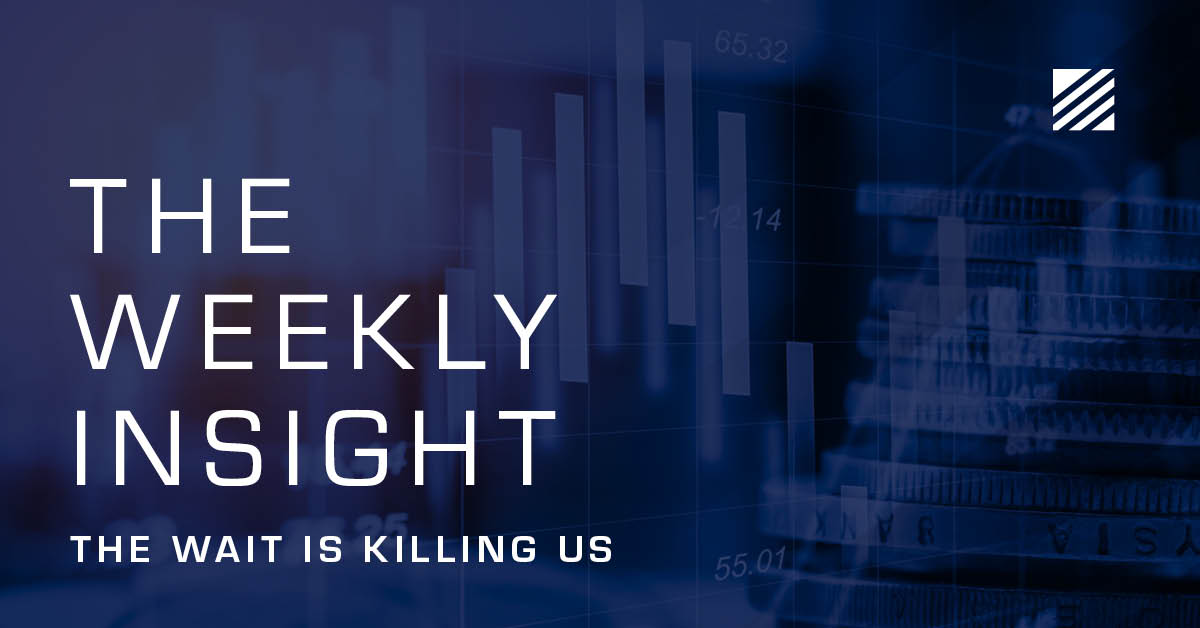 Is Omicron worse than Delta? Is it more contagious? Is it more virulent? No one knows…yet. And it will take some time to flush out the science. So now the wait is on. And the market – which hates uncertainty – does not like it. Never a place to simply twiddle your thumbs, the market is playing with worst case scenarios as it works through what all this means.

There was a piece in Investors Business Daily this week that said this about the current market volatility:

“A more-hawkish Fed and omicron variant fears are two catalysts for the recent sell-off, but what the market is doing matters far more than why.”

What the market is doing matters far more than why? Think about that statement for a second, because it sums up the last few weeks very well. And maybe it sums up our society today. A renowned market publication is only concerned about the what – not the why.

We like to think about the why – especially when the S&P 500 is only off 3.53% from its peak on November 18th. The world is far too quick to race to the “freak out” moment. And that is just a little too easy. The facts, and the data, are a little tougher. Especially when there is not a clear and definitive answer on where we are going. But let’s take some time this week to look at them.

The basis for all this volatility is Omicron, so let’s run through where that sits today. As of Sunday evening, there were eight states and 23 countries with known Omicron cases. That is a quick rise from where we found ourselves on Thanksgiving Day when no one – outside of the halls of the WHO and CDC – had heard of this variant.

That said, it is more likely than not that we are finding more Omicron because we are looking for Omicron. What is more important is what we know now about how contagious it is and how virulent it is.

The science is sound that Omicron is a very contagious version of COVID-19. But it also, currently, seems to be a milder version of the virus. In fact, according to one expert, that may end up being a blessing.

Clive Dix, a former head of the British government’s vaccine task force had some interesting comments on the variant last week. As he said:

“There is a school of thought that if it’s weaker in terms of what it does to people then we should let it wash over us, we should get rid of Delta and then we’ve got a weaker virus in circulation that we’re not worried about. That’s really good.”

His “we should get rid of Delta” comment is the part that needs to be broken down. And the best way to look at it is where we first found Omicron: South Africa.

South Africa’s COVID case counts have skyrocketed in the last week with more than 10,000 cases reported on Friday. That is up from 2,270 on Monday. Ninety percent of the reported infections are now being found to be Omicron variant. And while hospital cases have grown, they have not kept pace with the leap in infections – nor have they been at the pace of the previous Delta variant cases.

So, when you have a variant – Omicron – that is much more contagious than another variant – Delta – it “knocks it out” of circulation, overtaking the pool of potential hosts. If it is – and this is still not confirmed – less virulent, than, as Dix said, “that’s really good.”

And so, we wait. Given another week or two we will have a clear picture of the seriousness of this variant. In the meantime, we are sure it will give the market much to freak out about.

Powell Jumps Into the Fray

It was just a few weeks ago we wrote a memo outlining our concerns about what would happen if President Biden did not renominate Fed Chairman Jerome Powell. Then, before we could press send on the memo, Powell was renominated. Calm washed over the market. Interest rate policy would remain unchanged, and investors could act with certainty of how the Fed would behave.

We all know Powell has an inflation problem. We discussed two weeks ago (pre-Omicron) the difference between “transitory inflation” and “permanent inflation.” We noted that – while Powell had been right about transitory (or “re-opening”) inflation during the summer, permanent inflation was rearing its head. We cited the chart below. 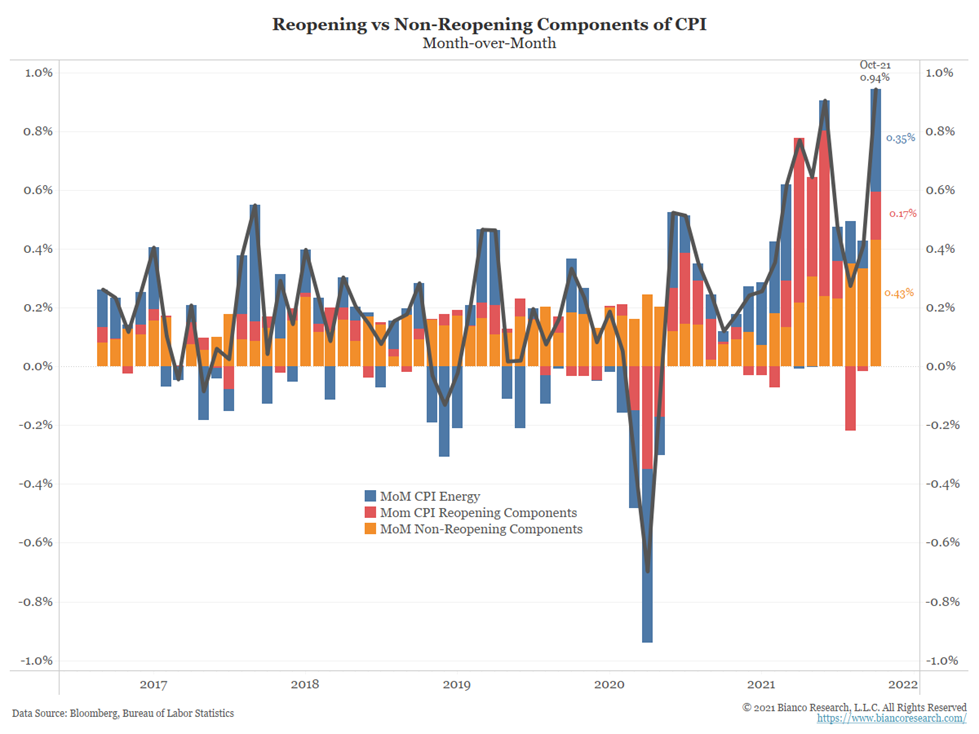 It seems Chairman Powell is a reader (ha!). Or at least he is looking at the same data we are. And like any good politician (don’t fool yourself…the Chairman of the Fed is a political position), he is not one to let a good crisis go to waste. Which is why on Tuesday he announced that he wants to remove the “transitory” label from inflation and begin speeding up bond purchase tapering and interest rate hikes.

That is not what the market was expecting when it celebrated his renomination two weeks ago today! And it threw a whole lot of additional uncertainty into the mix. Combine those statements with the Omicron variant and that is why you have volatility spiking as seen in the VIX chart below. 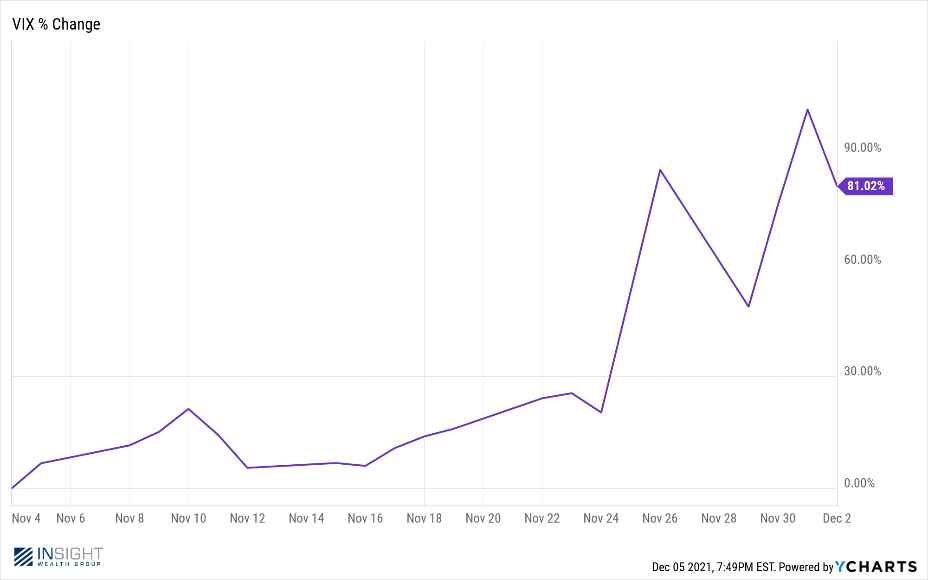 What has been interesting in this new bout of volatility is what’s been taking it on the chin. It is not the good old boring stuff. No, it’s the meme stocks. It is the stocks that are most “crowded” with retail investors. It seems the cries on Reddit to “HOLD!!” are not working. While the average position in the S&P 500 is down 7% since November 1st, some of these retail investor favorites are getting stomped. 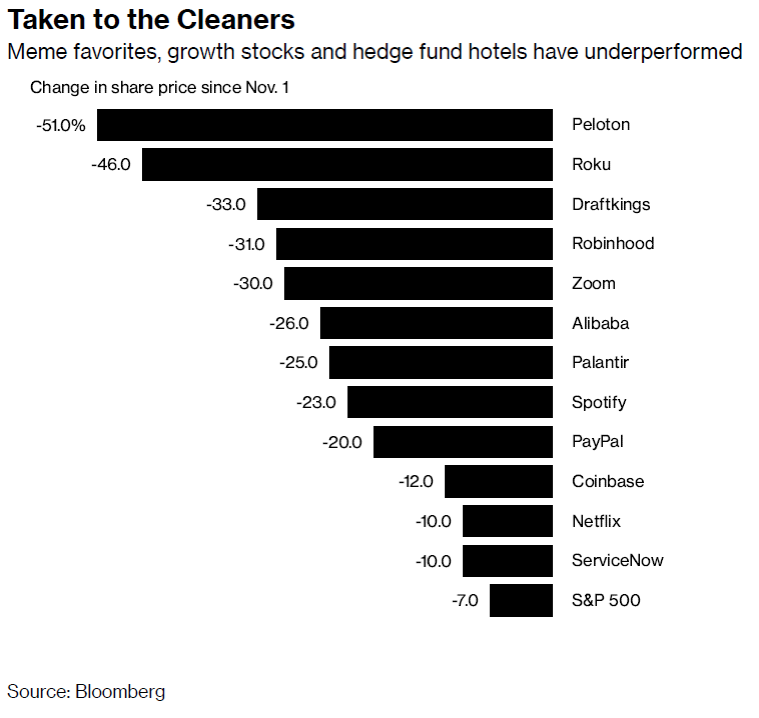 It’s worth noting that we’re probably due for a correction. We haven’t talked about it in a while, but you’ll recall us stating that the market sees a 10% correction, on average, about every year. It has now been 21 months since the last time that has happened. When you combine that with the large amount of buying the market was seeing pre-Omicron, the stage may be set.

But we still do not know what Omicron will be. And we do not have specific guidance from the Fed…yet. Retail investors are freaking out and – oftentimes – it is a good thing to be on the other side of that trade. We will be watching closely over the coming weeks to see just how worried we should be.