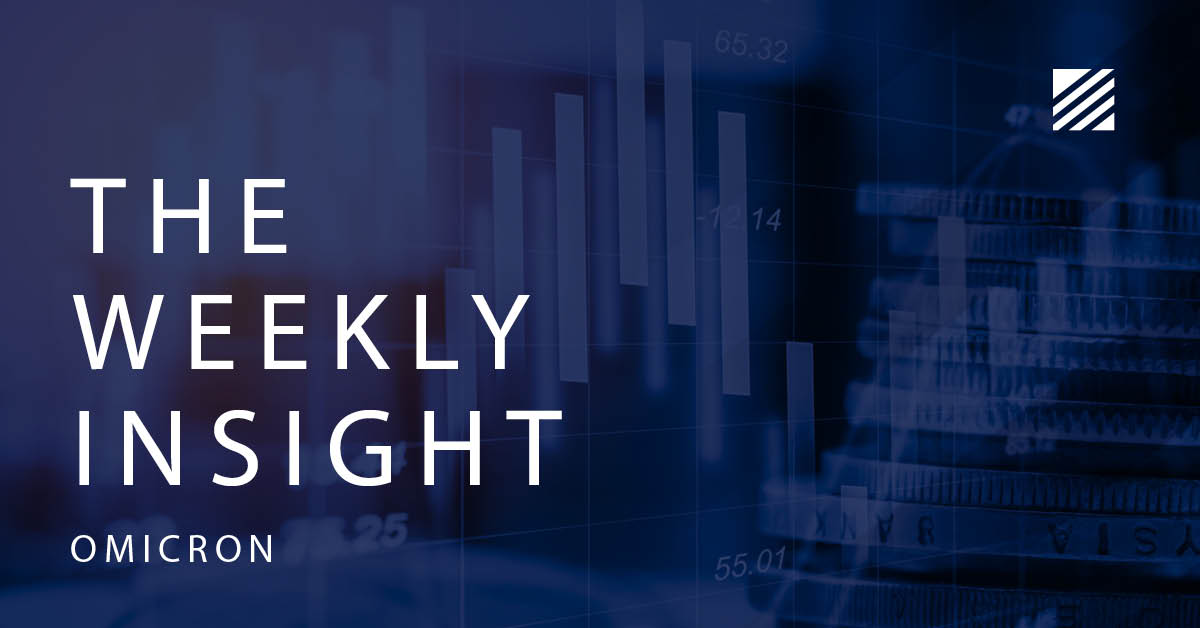 Well, how was everyone’s Thanksgiving weekend? We hope it was a calm and peaceful time surrounded by family. We hope you were able to refresh and recharge. And we hope you didn’t look at the news on Friday…

We’re joking. Sort of. Because if you turned on the TV or pulled up your market app, it was enough to startle you. 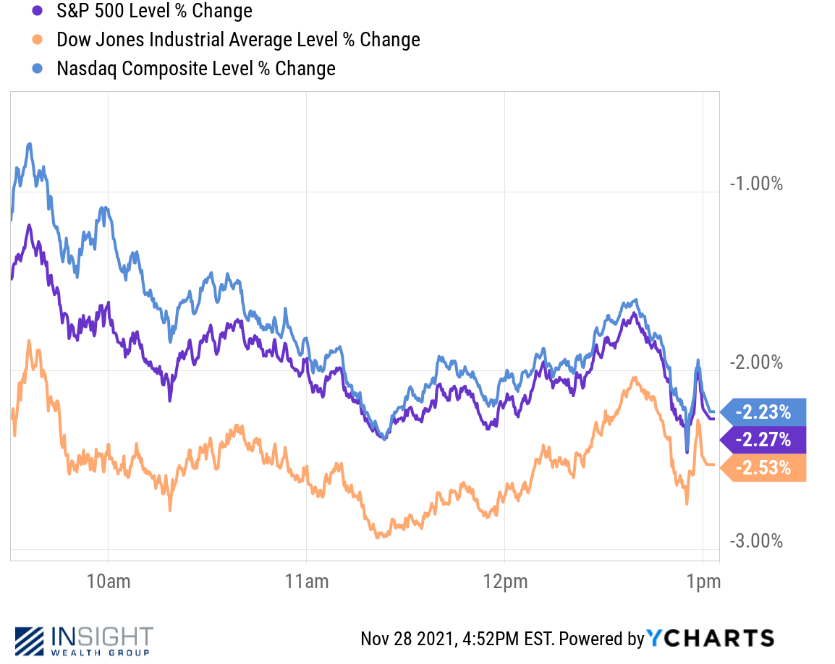 The cause? Omicron. We had to do a double take, because we thought it might be the bad guy in the next Transformers Movie: “Transformers 6: The Rise of Omicron”. All jokes aside, Omicron is the next variant of COVID. And it scared the heck out of the market on Friday. Combine that with a holiday trading day with significantly lower volume than normal, and you get an ugly day.

As we were doing some research over the weekend in our efforts to update you on this new wave, we came across a Tweet that we think summed up our thinking on this:

There is a temptation when we put out a memo like this to try to have an answer for everything. On this one? We don’t…yet. There is still a lot we don’t know. But we thought we would spend this week giving you the best information we have been able to gather so you know what we know. Let’s dive in.

Friday Was Not Even That Bad

We noted above that this announcement came on a particularly difficult day. The Black Friday trading day is always thinly traded. The market is only open for half the day and most traders are out on vacation. While that is not normally a big issue, it can drive up volatility when there is an aggressive move on one side of the trade or the other. We saw that Friday. When the selling began there were not many buyers on the other side of the trade to keep things from getting out of hand.

But did they really get that out of hand? Like many of you, we spent a lot of time with extended family this weekend. More than once the question was asked: “How are you hanging in there?” with a mix of sympathy and concern.

The truth? We were still feeling rather good. We got some pretty crummy news on Friday, and it still was not the worst day on the S&P 500 this year. Or the second worst. With a negative 2.27% return on Friday, it was the third worst day in the market this year. Does anyone remember what drove the market down 2.57% on January 27th of this year? Or how about when it was down 2.45% on February 25th? Or even when it was down 2.04% just two months ago on September 28th? In the grand scheme of things Friday wasn’t fun, but after the last two years we have all seen together, this one did not raise the blood pressure.

Why the World Is Concerned

You may recall a memo we wrote earlier this year when we noted scientists were concerned about the “Mu Variant” which they were worried would overtake the Delta Variant as the dominant strain. That didn’t happen – but Delta was bad enough. So why is everyone so stressed about this particular variant of COVID-19? We’ll let a quote from the President of Moderna speak to it:

“This is the highest level of alert we’ve been on, by far. What’s most scary about this virus is it’s managed to put all of its greatest hits into one (omicron) variant, and then has added maybe 10 mutations that we don’t even know what to think of yet…(The first data set) scared the heck out of us, because it was like a Frankenstein mixture of the greatest hits.”

That will make you sit up and pay attention, right? But it is also probably important to note that Moderna (and Pfizer) stand to make a whole lot of extra money if this becomes the dominant strain of the virus. They have already announced they are working to develop an updated booster that could be ready in as little as one hundred days.

It seems clear from the reporting we have seen so far that this version of the virus is (like Delta) very infectious. But infectious does not mean it’s as dangerous. It also doesn’t mean it’s not. We just do not know yet. As Susan Weiss, a virologist from University of Pennsylvania told the Washington Post: “(It’s) too soon to know if this will become a dominant strain and if it does, will it be more problematic in terms of vaccine protection. (There is) NO evidence that it will cause worse disease.”

What Does This Mean for the Market?

If you go all the way back to February 2020 – when the world was first starting to understand COVID-19 – the virus has never impacted the market. It has been the policy actions taken by governments and central banks that have had negative – and positive – impacts on the markets.

So, Friday’s reaction was less about how bad Omicron is, but instead about how bad the government reaction would be. Will we be shutting down the economy again (worst case scenario) or will we see a slowdown of reopening akin to what we saw with the Delta variant?

At this moment we just don’t know. The only substantive action taken so far was the shutdown of travel to the United States from eight African countries. That’s not a big issue – unless you had plans to head that direction in the next few months.

Ironically, this may solidify some of the big policy questions people had. A rise in COVID rates akin to the Delta variant would mean the Fed will not rush to raise rates. And, if people are being more cautious about the virus it may dampen some of the issues driving inflation.

The main message here is this: we must watch this closely and carefully. There is still a chance this ends up being the next “Mu” variant (much ado about nothing) or the next “Delta” variant (scary but not worth shutting down the economy). Or it could be back to the days of “14 Days to Flatten the Curve”.

Some European countries are already reimposing restrictions. Austria has shut down and Germany is looking at it. But last Monday the White House COVID-10 Response Team gave a press briefing (you can read the transcript here). There was one particularly important statement by Jeffrey Zients, the White House COVID-19 Response Coordinator and Counselor to the President. He was asked about the recent shutdowns in Europe and whether we are “headed in that direction whatsoever.” His response was telling:

“Yeah, so, no, we – we are not headed in that direction. We have the tools to accelerate the path out of this pandemic: widely available vaccinations; booster shots; kids’ shots; therapeutics, including monoclonal antibodies to help those who contract the virus.

We can curb the spread of the virus without having to in any way shut down our economy (emphasis added).”

Admittedly that quote was from before the news of Omicron broke. But we would like to think the head of virus response at the White House might have been up to speed before the rest of us. His answer is a clear indication of current White House thinking.

And so we watch, and wait, and watch some more. The economy is – as we have stated repeatedly in the last several weeks – in a positive position given the battering it has taken. The re-nomination of Powell has settled nerves on the monetary policy front. If the White House is not forced to take any drastic measures, we should be able to weather the Omicron storm as well.