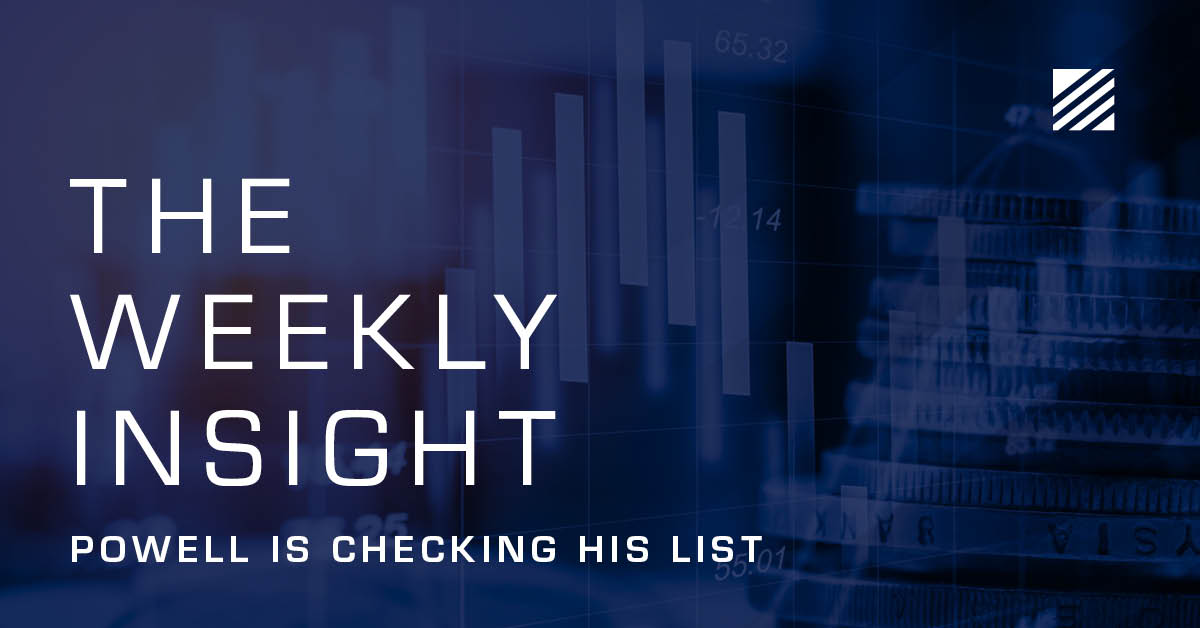 Tis the season! Happy holidays to each of you. We hope, as we head into the Christmas week, that this memo finds you well. It truly is the “most wonderful time of the year,” and, like you, we look forward to spending time later this week celebrating with family.

Before we get into the weekly update, we wanted to point out a few details regarding our holiday hours:

Now let’s get into what happened last week. It was a big week for the markets. But while it may be Christmastime, it has been seeming a bit more like Groundhog’s Day (or at least the all-time great movie). The big three issues we talked about last week are also the big three drivers this week. Let’s tackle them again.

Last week we said this:

“Right now, the market is anticipating a move to a more rapid tapering and interest rate hikes. Any indication that will not be true will result, we believe, in positive movement for the market. A move to faster rate hikes will not necessarily crush the market, but it may be a reason to press pause on the current market rally.”

And that is exactly what we got. Some minor negative volatility heading into the release of Fed minutes, a spike off the result and some tapering down as we worked through the back half of the week. Overall, the market was down 1.94% for the week but is still up 2.38% for the month. 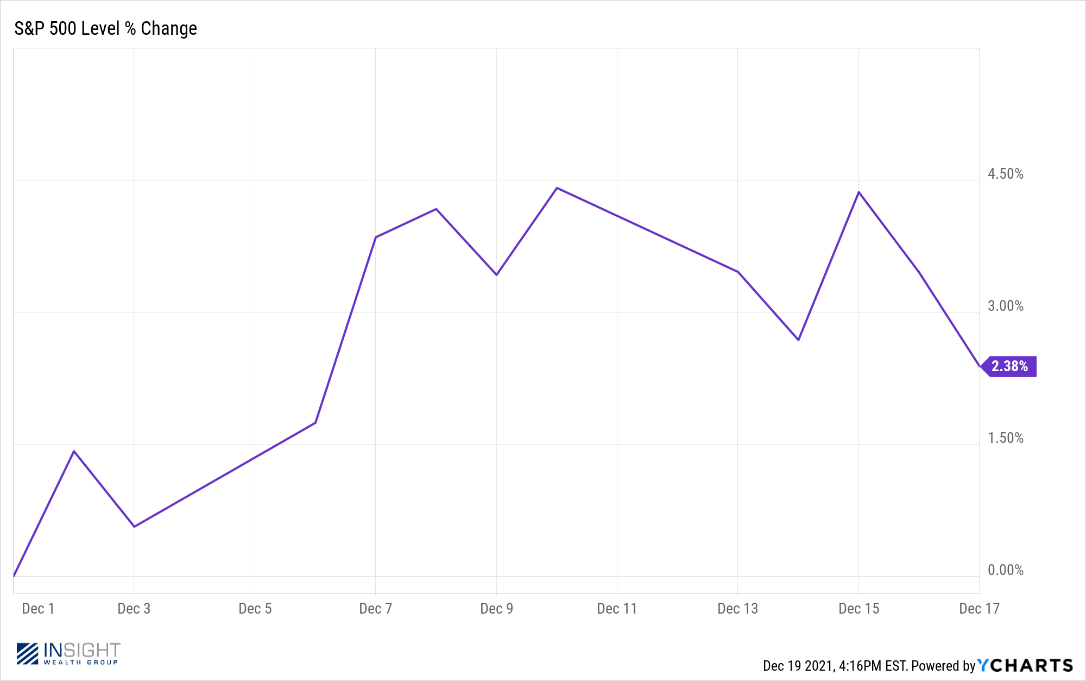 So, what did the Fed actually say on Wednesday? Let’s go through the big two issues.

On tapering, the Fed doubled its previous pace (set just last month) to $30 billion per month. That would put the central bank on pace to end tapering toward the end of the Q1 2022 instead of Q2 2022. As Fed Chairman Powell said, “Economic developments and changes in the outlook warrant this evolution of monetary policy.”  He tried to couch this statement by saying “The economy has been making rapid progress toward maximum employment,” but we all know they are really talking about battling inflation here.

The problem with the “Dot Plot,” however is…well…the Dot Plot. It is not, nor should it be viewed as, a firm forecast of interest rates. In fact, when asked in 2014, then Chairwoman Janet Yellen said this:

“I think that one should not look to the dot plot, so to speak, as the primary way in which the Committee wants to or is speaking about policy to the public at large.”

Our current Fed Chairman has said he sees the dot plot as something that has “on occasion, been a source of confusion.”

All the dot plot shows is the opinion of the FOMC members at the moment in which they voted. That opinion can – and will change – and we should not see it as firm guidance. We have talked in the past about how the is Fed particularly horrible at predicting what the Fed will, in fact, do in the future. That is because opinions – and situations – change.

But, for now, expect rates to rise in 2022. But what does that really mean for the market?

First, there is no question that net negative real interest rates (which we have had for nearly two years) have propped up business valuations. The more rates rise, the less that will be the case.

But that first-rate increase – whenever it happens – is not going to change that picture dramatically. Historically the first (and first few) rate hike has not dramatically impacted market valuations. Just look back to the market crash in Q4 2018. It was driven by interest rate hikes – but it was the seventh rate hike of the cycle which lit the fuse on the sell off.

We look at it like this: on many four lane highways (non-interstate roads) in Iowa, you will see a sign that cautions you if a light is about to change to red further up the road. It’s timed so that if it is flashing when you go by, you know it’s going to be red by the time you get to it (maybe a half mile down the road). What happened last week was we came up over a hill and saw one of those signs in the distance. When the Fed kicks off its first rate increase, the sign will start flashing. But we will still have a bit to go before interest rates raise to a level (the stop light) that assets are flowing out of equities and into other assets.

We have tried many times to read the tea leaves on the Build Back Better plan. Where was the money going to come from? Where was it going to go? How should our clients plan for the tax implications?

We just could not get any conclusion from Congress. Would Biden have the votes? Would there be a negotiated agreement that hit halfway?

As of yesterday, we can stick a fork in all of that until next year. Senator Joe Manchin signaled the demise of the legislation when he said on Fox News Sunday “I cannot vote to continue with this piece of legislation. I just can’t. I’ve tried everything humanly possible. I can’t get there.”

This piece of legislation may rise again in another wrapper as we head into next year. But the unanswered questions about 2021 taxes are finally answered: no changes this year.

We feel a bit like its spring of 2020 when we talk about Omicron. The spike in cases has not yet materialized here in the United States – but the wave is coming. And the debate about what all that means is still up in the air.

You have heard it all by now, so we will not go through it all over again. But there is little debate about how contagious Omicron is. This is going to hit us all.

The real debate is over how bad Omicron is. And to what level the vaccines (and booster shots) provide protection. On that there is extraordinarily little consensus. Some say this is a less virulent disease, especially to the vaccinated. Others say there is trivial difference from a virulence perspective between this and the Delta variant.

The question for us in these pages is about how Omicron will impact the global economy. That hinges on answering the virulence question. Right now, governments in the United States are shunning the idea of more lockdowns. Even New York City Mayor Bill de Blasio said over the weekend he has no intention of shutting down the city. We’ll see if that holds. If it doesn’t, the start of 2021 could get interesting.

In the meantime, we hope you have a happy – and very safe – holiday. We are grateful for a lot this holiday season. But right up at the top of the list is you. You have put up with our ramblings in these pages for another year! But more importantly you have honored us with your business. It is truly our pleasure to serve each and every one of you.