The Weekly Insight: This Too Shall Pass 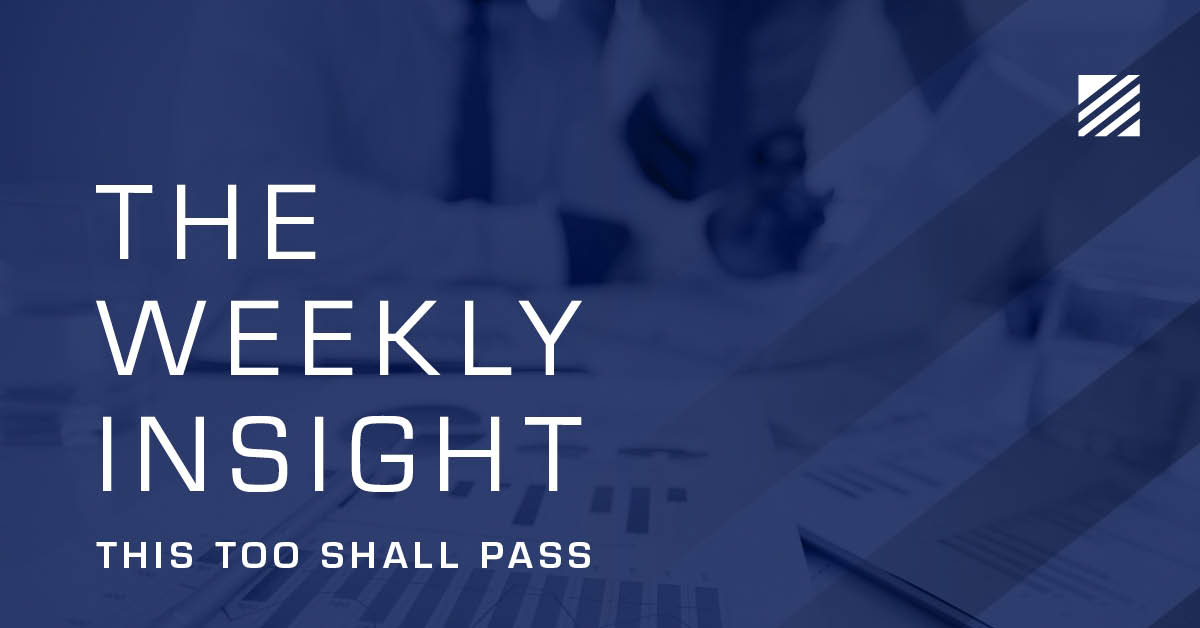 For those of you that remember your Philosophy 101 classes in college, you may remember the philosophical school of Stoicism. The Stoics were interesting folk. They essentially believed that “virtue” was the only good and any external things – such as health, wealth, and pleasure – are not intrinsically good or bad, but instead have value as “material for virtue to act upon”. They focused heavily on self-control and fortitude. Essentially the idea was this: you cannot control what happens in the world – but you can control how you respond to it.

While Stoicism is an ancient philosophy – dating back to pre-Christian Greek and Roman history – there are countless examples of stoic leadership throughout history. We received an email from a client last week called “The Daily Stoic”. It was very interesting – most notably because it was received before we knew a lot of the news about President Trump’s case of COVID.

The email was about a speech Abraham Lincoln (one of the more Stoic leaders in U.S. history) gave before he was elected President. The 1859 speech – given at the Wisconsin State Fair – was supposed to be about agriculture. Lincoln, as usual, had a more important message to pass along.

You will recall what was happening in the world in 1859. The country was torn asunder. Slavery, economic strife, political infighting. Things were a mess. Lincoln knew that – if he were to be elected just a year later – the mess would likely get worse before it got better. Many southern states were clear: if Lincoln were elected, they would withdraw from the Union.

So, at the Wisconsin State Fair Lincoln told the story of an Eastern King. The King asked his wisest philosophers to provide him a single sentence that would be both true in every situation and always worth hearing.

“They presented him the words,” Lincoln said, “’And this, too, shall pass away’”

Lincoln then goes on: “How much it expresses! How chastening in the hour of pride! How consoling in the depths of affliction! ‘And this, too, shall pass away.’”

The events Lincoln was referencing here eventually took his life. But his stoic outlook was correct. As a country we were able to get through a horrible war only to reunite and charge forward into one of the most important centuries in our existence.

The Daily Stoic email on Friday closed with this quote from Marcus Aurelius – one of the most famous Stoics – on this same topic. Marcus wrote “keep in mind how fast things pass by and are gone – those that are now, and those that come.” This too shall pass away. Keep that in mind as we dive headlong into the next several weeks.

We have spent several of our last few memos discussing our view the election would cause significant volatility in the stock market. This was one of those weeks that makes us wish we were wrong.

For your sake, we hope you skipped the debate on Tuesday night. We won’t attempt to place blame here for the behavior we saw during that 98 minutes of disappointment – but it’s safe to say it did not give the American people – or investors – confidence about our options in November. Unlike that Wisconsin State Fair in 1859, there was no Abraham Lincoln on that stage.

The next morning, however, there was good news regarding a potential stimulus bill and the market rallied (more on that later) ending the day up 0.8%. It was a nice relief after the overnight volatility.

Then – as we all know – came the news on Thursday evening that President Trump was potentially exposed to the Coronavirus. Once a positive test was confirmed, the overnight markets tumbled with the Dow down nearly 2%. Thankfully, the market rallied throughout the day (again on positive expectations of stimulus) and ended the day down 0.96%. But again, after the markets closed, more bad news weighed in: The President would be admitted to Walter Reed Medical Center amidst worsening COVID-19 symptoms.

Good news, bad news. Rinse, wash, and repeat. We got through a week that was packed with crazy news and the market did…basically nothing. In our opinion, that is remarkably positive. We will not likely be that lucky over the next five weeks which necessitates a cautious approach in portfolios. A broader look at the month of September shows us why. 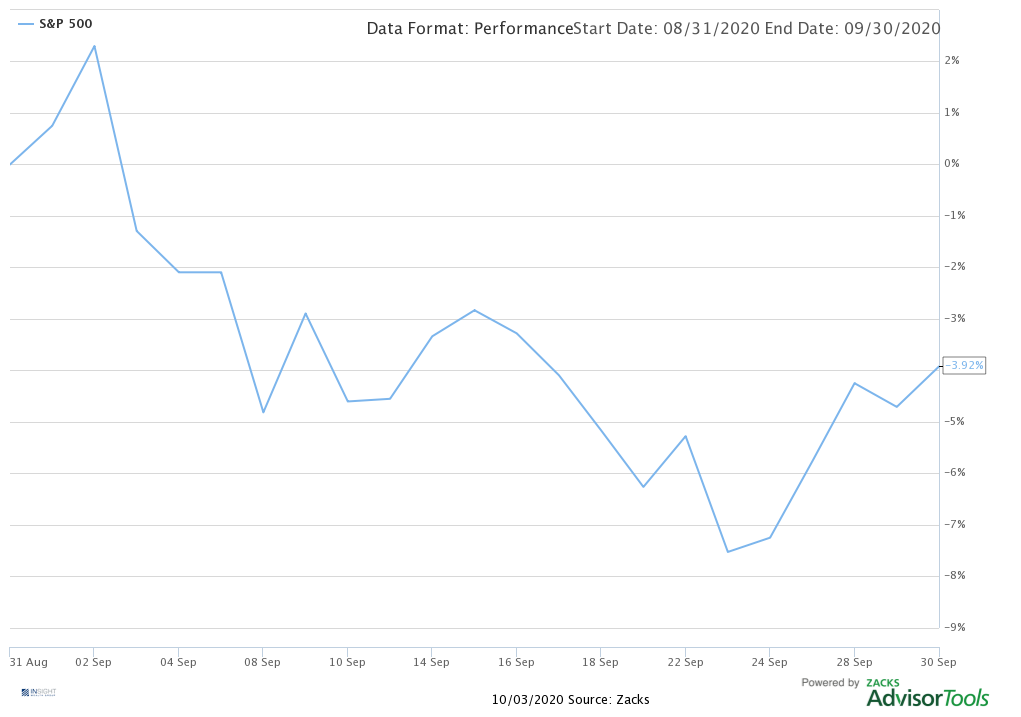 As discussed last week, the market’s nearly 4% correction was largely driven by reality setting in amongst the mega-cap tech stocks. Their performance through the first 8 months of the year was simply not sustainable. They remain particularly vulnerable if additional volatility is introduced by the election.

Thankfully, as we noted last week, we made the decision to reduce our exposure to the most overpriced equities in our core portfolios earlier in September. That has proven to be a timely decision.

Opportunities & Risks for the Week Ahead

The leading story throughout this week will undoubtably be President Trump’s progress in dealing with COVID-19. His infection brings the virus back into focus for the country and will drive its coverage across all major media platforms. There will be rumors and facts – and dispute about the validity of the facts.

While we think every American – despite party and some of the vitriolic trash on Twitter – hopes for a positive outcome for the President, the markets reaction will be straight forward. Positive news will allow the market to focus on the other underlying positives/negatives that present themselves. Negative news will be a drag on the market as it drives additional uncertainty.

If it were not for the President’s diagnosis, the leading story this week would be about the prospects of a new COVID stimulus bill coming out of Congress. The news coming out of last week was largely positive.

The Nancy Pelosi-led House of Representatives passed a $2.2 trillion stimulus bill that seemed much more in line with the $1.6 trillion plan being pushed by the White House. Both Pelosi, the White House and Senate Majority Leader Mitch McConnell acknowledged that talks have sped up in recent days. According to McConnell, “I think we’re closer to getting an outcome.”

This is a step forward from earlier in September. It seemed that Pelosi and McConnell were throwing stimulus bills like grenades between the two houses of Congress. Both seemingly knew their bills would never be supported in the other chamber but were instead using them as political cudgels.

Our initial opinion about this phase of the stimulus (which started nearly three months ago) was that it would be political suicide for Congress to not come to an agreement. Admittedly we have become more and more pessimistic as no breakthrough was apparent.

While we are more optimistic today, we would suggest getting the hopes of the market up has its own risks. If a bill is not passed in the next several days – or if it becomes clear there is no path to compromise – the market will respond poorly. Yet another risk in a likely volatile month.

The bill they are debating today seems to offer some of the most important pieces to keeping the economy rolling as we deal with another significant wave of COVID. The White House proposal today includes $400 in weekly federal unemployment benefits, another round of stimulus checks ($1,200 per eligible adult), $250 billion in state and local aid and significant support for COVID testing, rental and mortgage assistance, and an additional $160 billion in PPP funding for small businesses.

The gap right now seems to focus most on the weekly unemployment benefits (Democrats want $600/week) and funding for state and local governments (Democrats want roughly double what the GOP is offering). While that seems like a significant chasm, it is much smaller than we have seen in the past few weeks. Keep an eye on this debate as the week goes on.

We know many of our small business owner clients have received PPP funding made available in the initial round of COVID stimulus. The period for loan forgiveness was supposed to open in August and, frankly, we thought this process would largely be completed by now. It is not.

There is still substantial time for borrowers to submit their forgiveness applications – so it is not time to panic. We would suggest, however, that borrowers reach out to their lenders to get an update on their specific processes to move this ball forward. It is important to be at the top of their list when they begin the forgiveness process.

One of our goals as a firm is to make sure you have the best information available to make decisions about your financial future. We are excited to bring you an opportunity to do just that as it relates to the outcome of the Election and its potential impact on the markets.

An invite will go out later this week to join us for a webinar at 6:00PM CDT. Our guests that evening will include:

It will be an evening of blunt assessment about the state of the race – from both sides of the political isle – as well as an in-depth discussion about what the outcome of the election will mean for your portfolios. We hope you can set aside time to join us.

Thank you again for trusting us with your financial future.