Most people will not remember it these days, but there was a great 80’s comedy movie – starring Chevy Chase (one of your authors’ favorites) – called Funny Farm. It was an admittedly formulaic 80’s comedy – but it was also just funny.  It follows sportswriter Andy Farmer (Chase) and his wife Elizabeth as they move from the big city to the country so Andy can write the “Great American Novel”.

He moves to the country with an unrealistic image of an idyllic setting where he can write in peace. That does not happen. The farm is a nightmare. The locals are insane. He finds a body buried in his yard. And he is not a very good author. Fast forward six-months and Andy is sleeping late, drinking all day, and generally failing at life.

In a way, that feels a bit like 2020. There was an idealism surrounding the onset of “lockdown” at the beginning. We would be able to spend more time with our families! We would finally get some of those long-forgotten projects done.  Surely someone decided – like Andy – they would write the Great American Novel. But here we are today – nearly 7 months later – and things continue to get wilder by the minute.

There is a lot to unpack from the last week:  President Trump’s COVID diagnosis, stimulus negotiations, debate cancellations, etc. We will get through all of them in this memo – but first we want to start with a very insightful comment we heard from a client this week. It went something like this:

“Does it really matter who gets elected President?Given how low the economy has gone in the last six months – isn’t the only way to go up?”

Is the Only Way to Go…Up?

The initial answer to this question is…mostly.  The election we had in 2008 was an excellent example of this phenomenon.  We can all debate Barack Obama’s economic philosophies – but it never hurts when you are starting in the basement.  Expectations for the economy were an incredibly low hurdle to get over.  There is no question the next President – whoever it is – will have the same advantage.

This question gets to one of our favorite topics:  the intersection between public policy and the economy.  As you know, we believe they are intrinsically linked – but sometimes the leaders in Washington get a little more credit than they deserve.

That said, the recovery over the next several months is going to be based solely on getting people back to work and spending money again.  In our opinion, that is going to be driven by three key topics:

If all three of these were achieved – no matter which party is in office – we would argue the economy could recover quickly which would get people back to work and boost U.S. equity markets.  Let’s take a moment to discuss each of these.

There is no single moment or policy proposal the market would more appreciate right now than the FDA approval of a COVID-19 vaccine and a plan for widespread dissemination.  That – more than anything else – would give the entire country confidence there was a light at the end of the tunnel.

The concern with all the political double talk is the risk it may lead some to believe the vaccine is not a safe and scientifically proven product – but instead a prop in an ongoing political dispute.  We have faith that the FDA will do what they have done for years:  use the best available scientific approach to ensure a vaccine is safe and effective before its release to the public.

That process takes time.  It is, however, well defined so we can track it closely.  We know the process is advancing and advancing at a historical pace.  Today there are 44 vaccines in clinical trials in humans (Phase 1, 2, or 3) and another 92 pre-clinical trials under active investigation in animals.  Today let’s focus on those closest to approval by the FDA.

The approval process involves three phases of testing.  The first tests the vaccine’s safety and dosage as well as confirm it stimulates the immune system.  This is done in a small group of people.  The second phase expands on the first by increasing the group to hundreds of patients including children and the elderly.  Phase three – the final phase – uses a large-scale sample to test how many become infected compared to volunteers who receive a placebo.  Additionally, this phase is large enough to reveal potential side effects that may have been missed in previous trials.

There are currently 9 potential vaccines exclusively in Phase 3 (there are several more in a combined Phase 2/Phase 3 process).  Of those nine, five have been approved for use in China and Russia (and are products of those countries).  There is considerable skepticism about those drugs in the scientific community.  So today let’s look at the timeline for the four most likely vaccine candidates in the United States.

Moderna/National Institutes of Health:  This vaccine is an RNA vaccine that produces viral proteins in the body.  It has proven efficacy in monkeys (discovered in March) and currently has a Phase 3 trial which began in July.  They have enrolled 30,000 healthy subjects across 89 testing sites in the United States.  They intend to wait until a sufficient number of volunteers become sick with COVID-19 before they can fully understand the efficacy of the vaccine vs. the placebo.  They believe that will take until the end of 2020 or early 2021.  On August 11th, the federal government awarded the company $1.5 billion in exchange for 100 million doses if the vaccine proves safe and effective.

Johnson & Johnson:  This vaccine is based on a vaccine used for the last decade for other viruses such as Ebola.  Again, this proved to work in monkeys earlier this year.  They launched a phase three trial with up to 60,000 participants in September.

Like Moderna, Johnson & Johnson is expecting production to begin in 2021.  The federal government has also signed a contract with Johnson & Johnson to produce 100 million doses for domestic use if it is proven safe and effective.

Novavax:  This vaccine is made by “sticking proteins onto microscopic particles” and is a process Novavax has used successfully in other vaccines.  Like the previous companies, the U.S. government has invested significant resources in moving this vaccine forward.

Novavax launched a phase 3 trial in the U.K. in September and is planning to launch a larger phase 3 trial in U.S. this month.  They believe that – if the trials are successful – they can deliver 100 million doses in the United States by the end of March 2021.

Murdoch Children’s Research Institute:  Not much is publicly available about this potential vaccine which is being developed in Australia.  It is based off a vaccine developed nearly a century ago to protect against tuberculosis.  No timeline for its development is available.

As you can see, the known timelines are very similar.  It is most likely we have a vaccine available sometime near the end of the 1st quarter of 2021.  That is nearly six months away.  It is important to protect ourselves against becoming too optimistic about the timeline – but we cannot deny we have at least three solid options from three significant vaccine manufacturers.  This is very good news.  The work the pharmaceutical industry has undertaken in such a short period of time is astounding.  Let’s hope they can get it to the finish line.

A Unified Government Strategy to Manage and Contain the Coronavirus

Harumph.  Yeah…we do not have much good to say about this.  As each of you know – no matter which side of the aisle you call home – elected officials have politicized this virus to death.  We have very little confidence (no matter the outcome of the election) that the federal government and governors are going to have a kumbaya moment and develop a unified and effective strategy.  Sadly, we think we are going to have to deal with our existing patchwork of efforts until a vaccine is available.  In the end, the vaccine will have to be the answer to this virus.

Is there such a thing as a “double harumph”?  Because if there is, we are going to lay it down here.

Let us be clear:  we believe strongly in fiscal conservatism.  As a country we cannot spend fake money into infinity without consequences.  Someone will eventually have to pay the piper.

But these are not normal times.  We sat in on a webinar with former Federal Reserve Chairman Jerome Powell last week and we thought he explained the need for fiscal stimulus well.  We are going to paraphrase here, but you will get the drift.

As he explained (and as we have discussed in these pages before) this is not a normal recession.  The normal pain points are not the problem today.  Real estate valuations have not dropped.  Banks are not going belly up.

In a normal recession, those are a few of the areas that need the most outsized support.  And the best way to support them is with monetary policy.  Cutting interest rates is very beneficial as these are interest rate sensitive areas of the economy.

But this time it is different.  The areas most hurt by COVID-19 are not interest rate sensitive.  They are the service industries.  A mom and pop restaurant, or a movie theatre, or a barber shop are not going to be able to survive on interest rate cuts alone.  That is where things like the PPP program, unemployment support, and direct payments can have a significant impact.

Powell also pointed out that one of the biggest problems coming out of the 2008 financial crisis was at the state and local government level.  Just as it appeared the crisis had passed, we started to see massive layoffs by state and local governments.  They are required in many places to maintain a balanced budget (wish we had that in Washington!) and when tax revenue faltered, they were forced into substantial layoffs and program cuts.

That could be avoided with the state and local government support proposed in many of the stimulus programs we have seen in the past few weeks.  But to be fair, neither side is playing honestly.  The GOP has been very slow to admit this is a problem, but finally came to the table with an offer of $125 billion in support.  The Democrats, in the exact opposite move, have been over-inflating the need.  They are demanding nearly $250 billion to move the bill forward.  When you look at the shortages across the nation it does not add up to $250 billion. 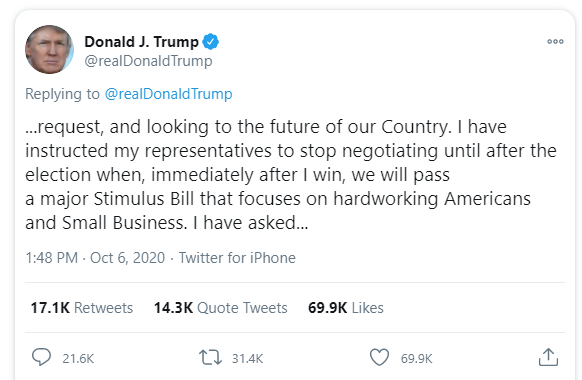 And the market did this: 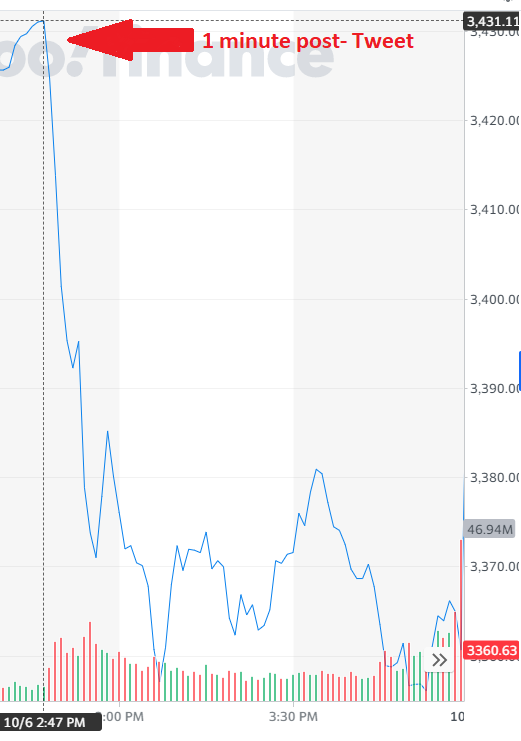 Since that point, the message has been confused.  But the answer right now seems to be “don’t count on stimulus right now”.  We will continue to watch closely, but unless there is a substantial breakthrough, this is a post-election issue.  When we do finally get it (and we still believe we will) the market should see it as a positive.

And so, the Funny Farm continues.  But despite the political jousting – the science is starting to take hold in the vaccine process.  We are getting there.  While it seems slow, we must remember this vaccine process (if successful) will be the fastest in human history.  We should know by the end of the year just how soon we can get there and allow the world to start making decisions based on real economic data instead of political posturing.  Whoever the President is…we will get there!