The Weekly Insight: The Stress Test 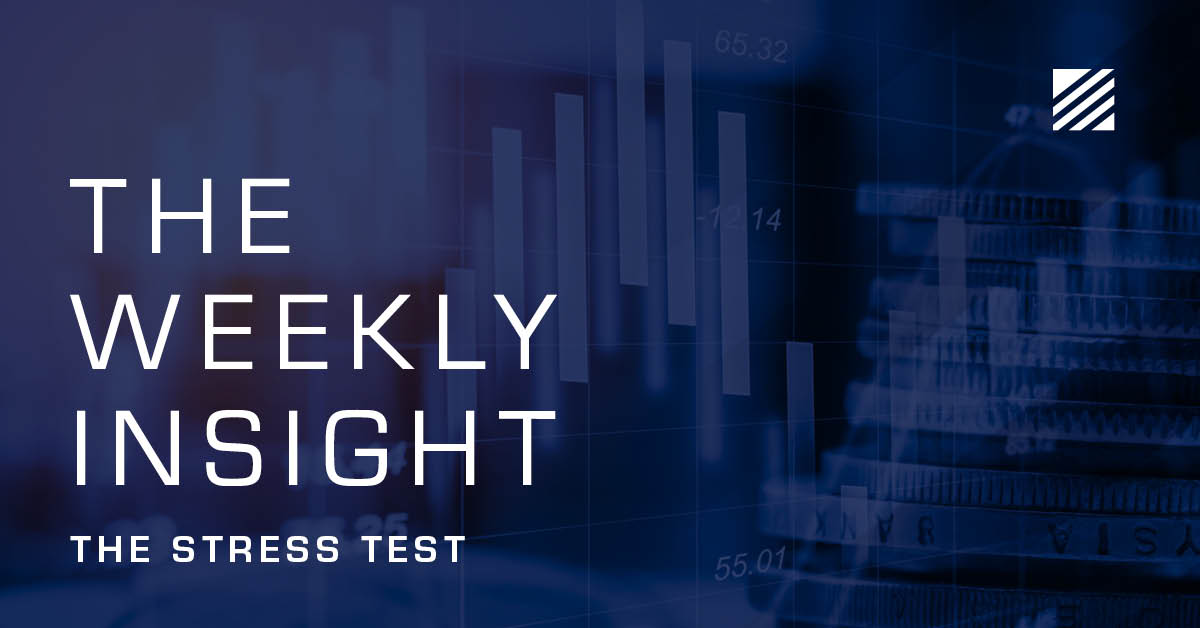 Well…we promised last week would be a big week! In that regard, it didn’t disappoint. The reasons it was a big week? There was some disappointment there. We’re going to dive into the data this week to better understand what we learned.

But before we do, there’s one point we’d like to make: even with 9.1% inflation and some less than impressive bank earnings last week, the market held pretty well. In fact, since the Fed came out on June 15th and announced their 0.75% rate hike, all major domestic indices are up substantially. Even the Bloomberg US Aggregate bond index is up. 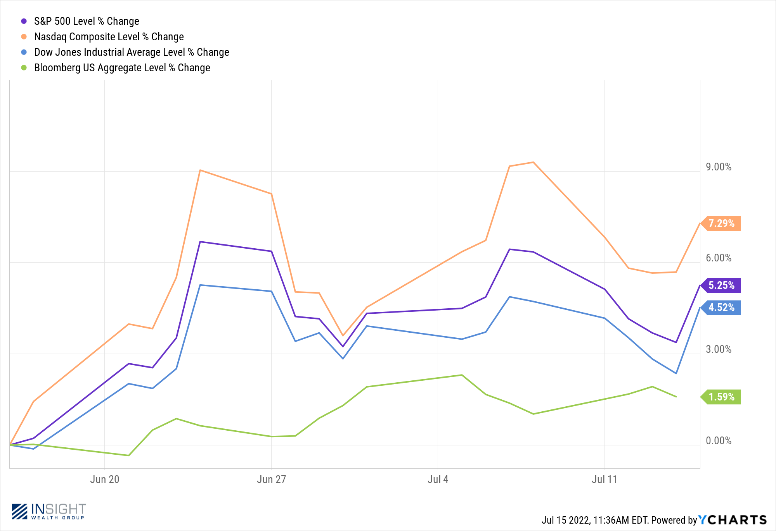 We’ve noted in the last few memos that June’s inflation numbers were a bit up in the air. We were confident that Core CPI would continue to fall, and it did, dropping from 6.0% year-over-year in May to 5.9% in June. It has consistently fallen since it reached a peak of 6.5% in March. It is now at the lowest level we’ve seen since the end of 2021.

You all know the story by now: if Core CPI is dropping and headline is rising, it’s clearly due to one of the two issues that is not included in Core CPI: food or fuel. The chart below makes it clear what’s causing the problem: a 41.6% rise in the price of energy over the last twelve months. 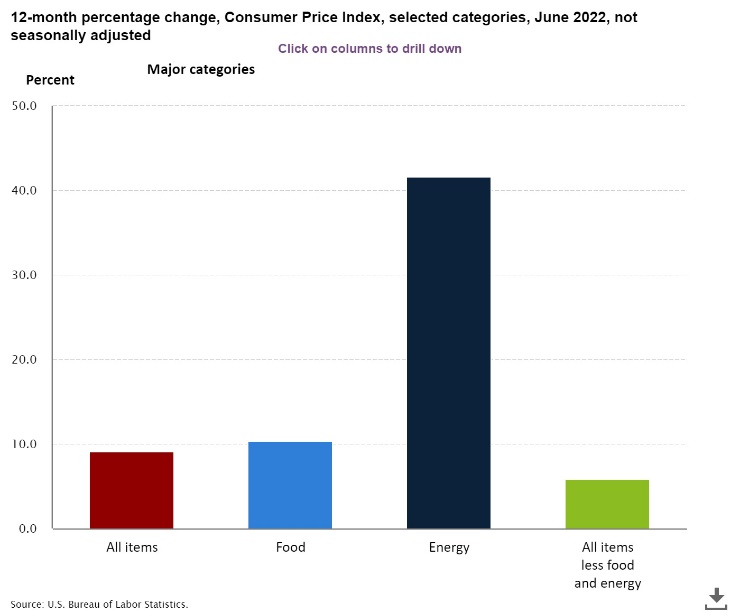 Diving a little deeper, we can see that gasoline costs for consumers over the last twelve months have risen 59.9%. That’s where consumers are feeling things today. 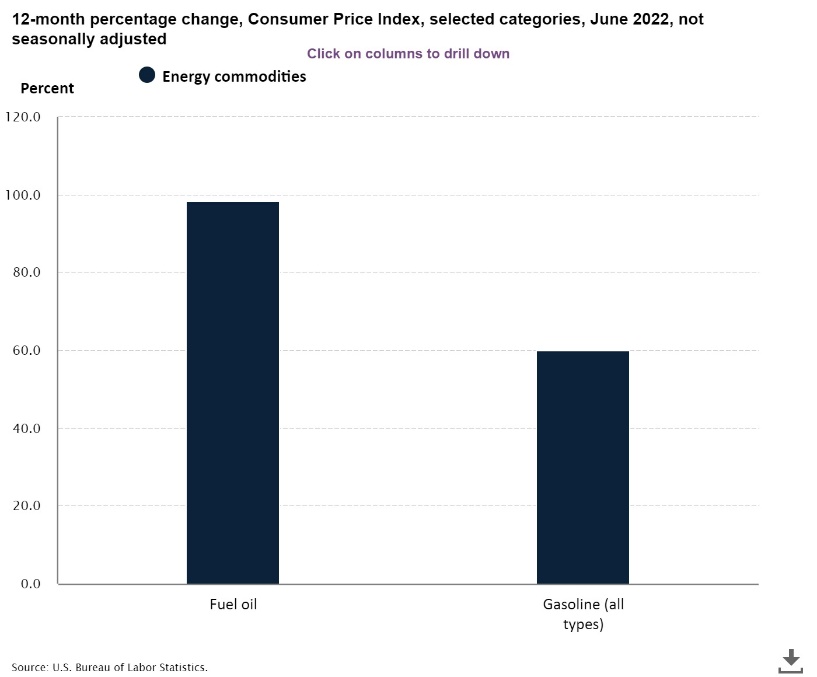 The big question we had internally was when the peak in energy prices would be felt by consumers. We know energy prices have been falling. As of the writing of this memo, oil prices are down nearly 25% from their high. In fact, they closed last Thursday below the price prior to the start of the war in Ukraine. But it takes some time to feel that change at the pump. Information from the Energy Information Administration at the DOE shows us that, despite the drop in oil prices, the average price for a gallon of gas in June rose nearly $0.50 – from $4.545 to $5.032.

If last Wednesday was Inflation Day, Thursday was Jamie Dimon Day. As the Chairman of the largest bank in America (J.P. Morgan), the market pays attention when he gives his remarks during their quarterly earnings call. And the J.P. Morgan call was emblematic of the other big bank calls last week, so it’s a good example of what drove the market.

First, let’s get it out of the way: J.P. Morgan underperformed analysts’ expectations for the quarter. Analysts were expecting $2.88 per share in earnings and the result was $2.76 per share. Revenues also underperformed, coming in at $31.63 billion vs. $31.95 billion expected. All of that led to the stock being down nearly 4% immediately after the news.

The big takeaway from the call, in the media, was that the bank was building in additional loan loss reserves of $428 million and was suspending share buybacks. There is some disconnect, however, from what they said to what the press reported as to the why of those decisions.

Mr. Dimon and his CFO were clear that the reasoning behind the changes was to comply with the stress test requirements that come from the Federal Reserve. As you may recall, these stress tests were put in place after the 2008 financial crisis to ensure the “too big to fail” banks never experience the problems we saw nearly 15 years ago.

Mr. Dimon was more than a little perturbed about the newest set of capital requirements posed by the most recent stress test. He described the formula for creating them as a “black box” and noted that J.P. Morgan made money during the 2008 crisis. Our response? We get his frustration but are also glad we won’t have to deal with major bank failures any time soon.

But the disconnect was well demonstrated by a CNBC article we read. They linked these decisions to “Dimon’s increasingly cautious stance” and cited a quote from him about “geopolitical tension, high inflation, waning consumer confidence,” etc., etc., etc. When this comes from the guy who recently warned about a “financial hurricane,” it can give the sense that things are getting bad and getting bad quick.

Well, we went and read the transcript. Yes, Dimon warned about the fact that a recession might be on the horizon. But he also said this when asked about his “financial hurricane” quote:

That doesn’t sound nearly as dire. But what about if we do get a recession? What if that storm comes?

“It’s just going to go through a storm. And, in fact, going through a storm…gives us opportunities, too. So, I always remind myself the economy will be a lot bigger in 10 years.”

In the end, all the big banks had similar comments. They’re all being forced to be more conservative due to the Fed’s stress test requirements. And they’re all still making money.

And, in the end, the market did end up getting it right. All the big banks recovered nicely after Thursday’s drop and all, but J.P. Morgan ended up for the week. 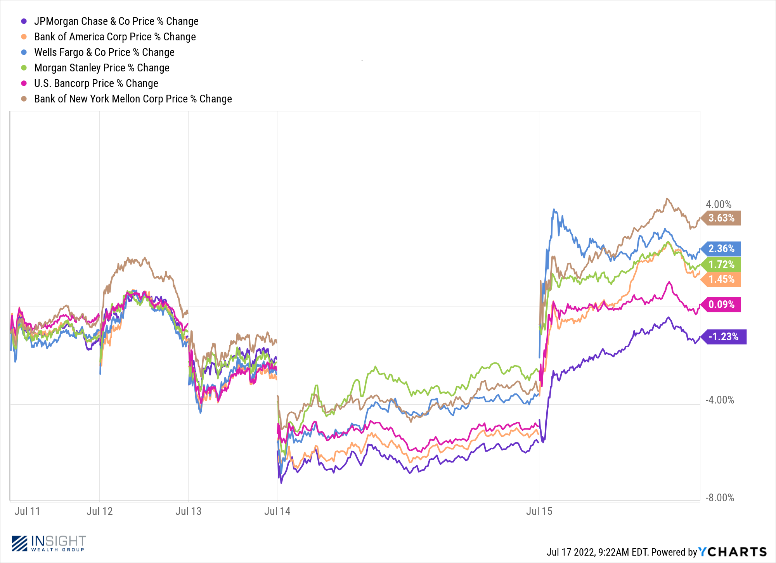 Now we wait for the next shoe to drop: the Federal Reserve’s interest rate decision on July 27th. Chairman Powell will get to weigh in on whether he thinks inflation is peaking. And we’re going to get another significant rate increase (the market is currently putting a 70% probability on a 75bps hike).

Until then, earnings will be the big story. Only 35 S&P 500 companies have reported earnings so far. Next week we will see more than double that number. Hopefully, a week focused on results – and not predictions – will see a little less volatility.