The Weekly Insight: The Sanctions Game 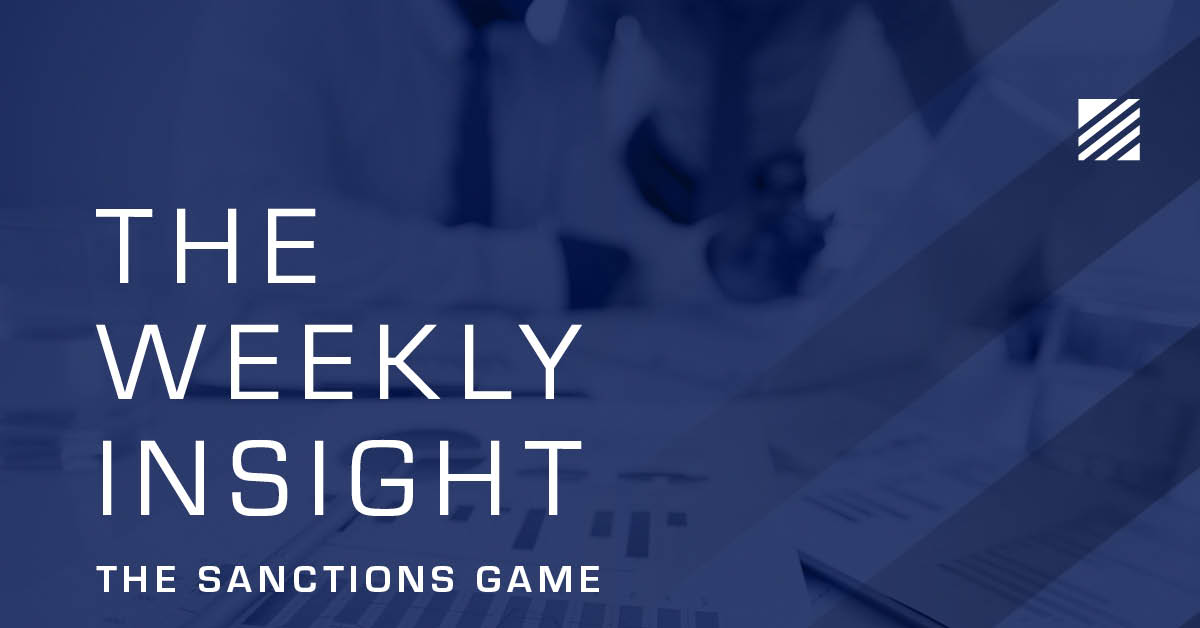 Three weeks ago, we wrote a memo titled “The Putin Papers” in which we tried to dig into the motivations of Comrade Putin as the Ukrainian conflict began to unfold. In it we discussed the state of world affairs and how it has changed from 1945 until today. We ended it with this statement:

“Now the bad guys of the world are looking at a politically weakened U.S.A. and saying, “I don’t think they have the means or will to stop us.” And someday soon, be it Putin, or Xi, or someone else, they’re going to give it a go. How we – and the democratic world – respond will have profound impacts on the world economy for a long time. And it is becoming a risk that we must weigh in portfolios as we move forward.”

As the entire world knows by now, Putin did decide to give it a go. And now – like it or not – the world will bear the consequences of this dastardly act.

How America and the West respond to this crisis will reverberate on the world stage for a long, long time. Our current reaction? Not exactly a statement of unity. In a country where it was often said “politics ends at the nation’s shores”, politics has already muddied the waters.

But our job here is not to wade into the political swamp. Its instead to understand how that swamp – and the hell Vladimir Putin has started in Ukraine – is going to impact the market and the economy. So, let’s dive into it.

Does Russia’s Economy Matter to Us?

Before we can start talking about the costs of this conflict, both at home and abroad, we must understand what the Russian economy means to the world.

While its economy has made strides in becoming more market-based it has never fully been able to make the switch to a westernized economy. The lack of regulation, prominence of “mafia” or “oligarchs” that control vast portions of the economy, and lack of solid economic growth for its citizens mean it is certainly not a “first world” country. The average Russian brings home just $585/month – or just over $7,000 per year.

As a developing country, its economy is largely focused on the exploitation of its commodity resources. Nine of the top ten Russian exports are commodities. And over 50% of all exports come from two areas: 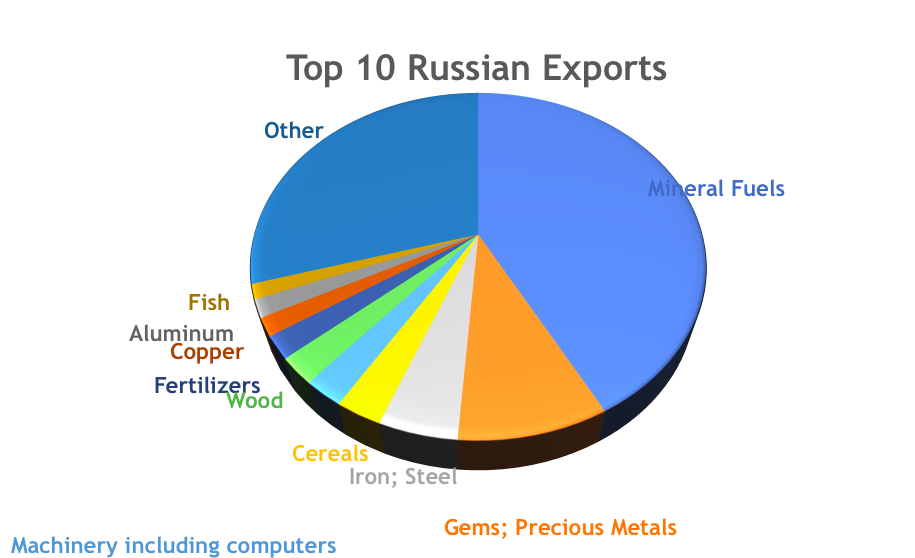 What Do the Sanctions Mean?

If we have minimal economic interaction with Russia and Ukraine, how much power can we (and the rest of the west) really wield when it comes to sanctions. Let’s start by reviewing the sanctions that have been imposed so far and what they actually mean.

Editor’s Note:  As you all know, the situation with Ukraine is evolving rapidly.  That includes on the sanctions front. As you read our thoughts below (written on Saturday), please note that the U.S. and the EU did drop additional sanctions over the weekend, including a limited SWIFT cutoff on certain Russian banks as well as directly sanctioning the Russian Central Bank directly.  As you’ll note in our comments below, that will have a significant impact.

The main way in which the western world intends to make Putin and his cronies suffer is by cutting off access to western capital. They have done that through a variety of sanctions on the largest banks in Russia. This has a two-fold affect: first, the banks assets in the west (and they are significant) are frozen. Second, the banks will no longer have access to U.S. and European debt markets.

Over the long-term, this is a big deal. It is the type of action that can strangle the economy of Russia. And that is being recognized by the Russian stock market and the currency, which have fallen 53% and 12% YTD. 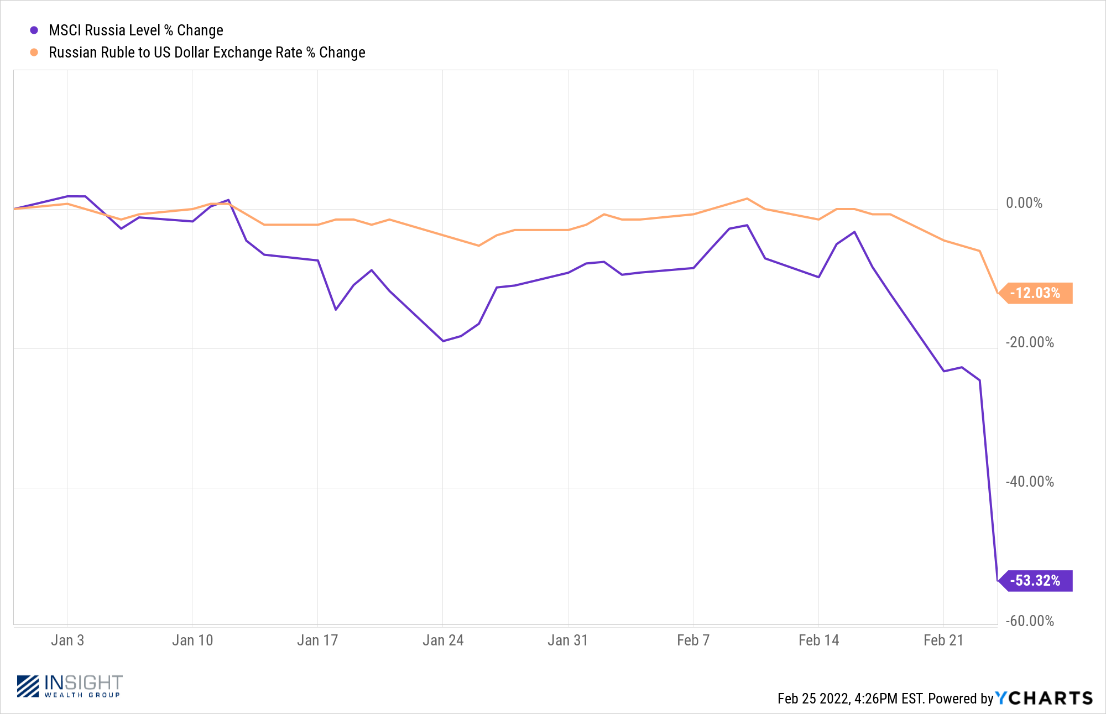 Editor’s Note:  In the last 24 hours, Russia announced it was closing its stock market.

But that is the long-term. We know that, prior to the invasion, Russian banks stocked up on U.S. dollars and have plenty of liquidity. They were prepared for this type of retaliation.

There is much discussion of cutting Russia off from SWIFT – the international platform for banking transactions. This would be important – but it is not truly effective unless we fully shut off their banking sector first. For example, there have been no sanctions yet against the Russian Central Bank (the Russian version of the Federal Reserve). If the Central Bank can act on the world stage on behalf of their other banks, having their other banks cut off from SWIFT does not do much good.

It should be noted that over the weekend the White House began discussing sanctions against the Central Bank. Whether or not that comes to fruition is yet to be determined but would be an aggressive step forward.

As you are aware, there is an elite group of Russian businesspeople who have lavishly profited off Putin’s regime over the last 20 years. They have capitalized on the corruption in the Russian Federation and, since it has benefited them directly, they are the biggest supporters of Putin and his regime. Making them feel the pain may be one of the best ways to make Putin feel the impact directly.

There have been a variety of sanctions placed on a number of these individuals in recent days. But it is, at best, a hodgepodge of new rules – not the kind of thing which will cause multi-billionaires to really suffer. The international community has yet to step forward with the “tough stuff” such as revoking visas, confiscating property, kicking their kids out of western countries, etc. Until then, this step has been an inconvenience, but not a sticking point for the oligarchs.

There was much made of the Nordstream-2 pipeline issue. Germany announced that they would not open the pipeline in response to Russian aggression. Additionally, the U.S. announced they were sanctioning the company that owns the pipeline. These combined moves essentially killed Nordstream-2. But, while that impacts Putin’s hopes for future energy sales to Europe, it does not change the situation today.

Remember, Nordstream-2 was not actually pumping any gas to Europe before the war started. The current sales of natural gas – which account for roughly 39% of Europe’s supply of natural gas – have continued to flow. There have been no sanctions against the sale or production of petroleum products in Russia. In fact, sales of Russian gas to Europe went up last week, as buyers were taking advantage of price dislocations between the price of Russian gas and other sources. Putin made more on gas sales during the invasion than he was making before. 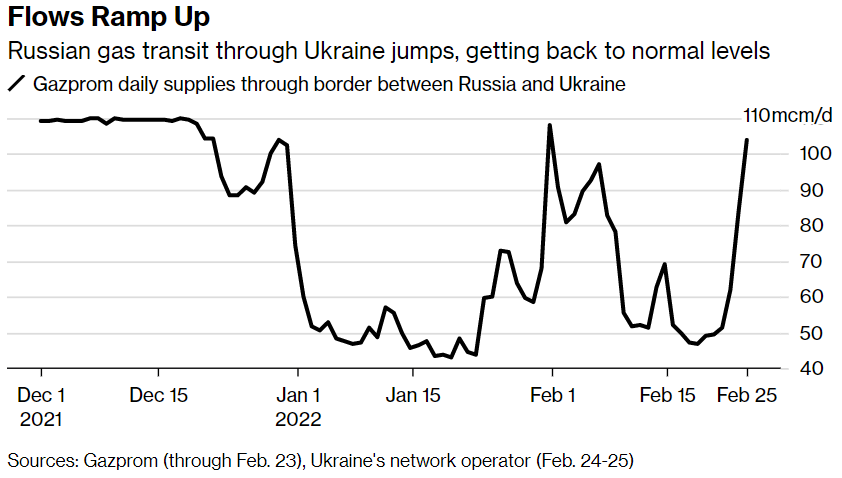 As we have said in past memos: “Russia is an oil company masquerading as a country.”  If you want to make them really bleed financially, you must cut them off from the international energy markets. Putin, smartly, executed a new, long-term deal with China to export natural gas prior to the beginning of hostilities. He was already preparing himself for the Western world to attack their energy industry. That has yet to happen.

We talked last week about the historical evidence behind the “invasion trade.”  Uncertainty prior to invasions has led to market volatility. But markets have responded positively once things got underway. The news may not be positive – but at least the markets could measure its impact.

That seems to have been the case again last week. There was a lot of volatility leading up to the invasion. The first half of the week saw markets running scared. Yet, once the invasion started, and the initial rounds of sanctions were announced, the market responded quite well. In fact, the S&P was up for the week (slightly). Even the European stock market rebounded nicely on Thursday and Friday.

Why? Because, sad as it may be, the world is looking around and saying “this isn’t going to affect us economically” – at least not as much as initial concerns may have suggested. The sanctions that have been put in place – while some of the harshest we have seen – are not harsh enough to cause economic discomfort to the Western world.

It seems Western governments are not yet willing to make that sacrifice. And so, instead of a swift and decisive blow to the Russian economy, we are going for a long, slow strangle. It may still be the undoing of Comrade Putin, but it gives him a lot of room to maneuver and execute his plan for Ukraine. It is left to the Ukrainian people to battle the immediate war for democracy. They have shown amazing resolve and courage. We should all say a prayer for them and hope they can deal the blow our governments are not yet willing to initiate.