The Weekly Insight: Mark Your Calendars 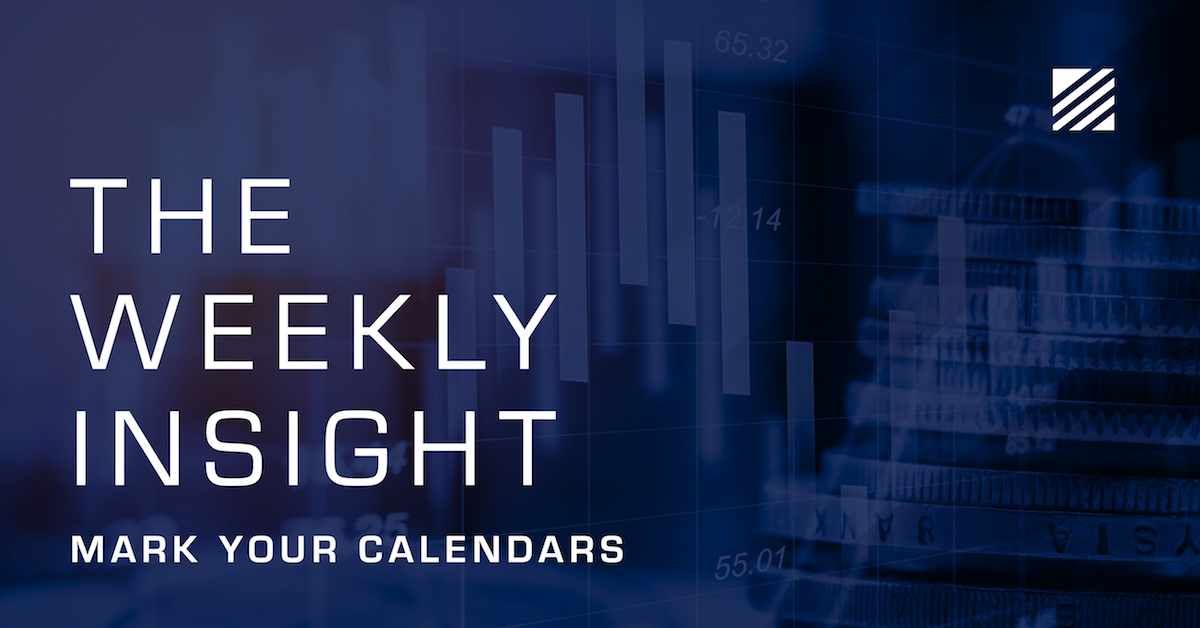 What is interesting when you look at the chart is that it is really the tale of two stories. The decline at the beginning of the year was driven by concerns of inflation and the Fed’s potential response. As the market became assured that they had a few months before interest rate increases began, the market rose nearly 200 points. The second impetus was undoubtedly concerns about Russia’s potential invasion of Ukraine and has cost the S&P nearly 250 points in the last few weeks. 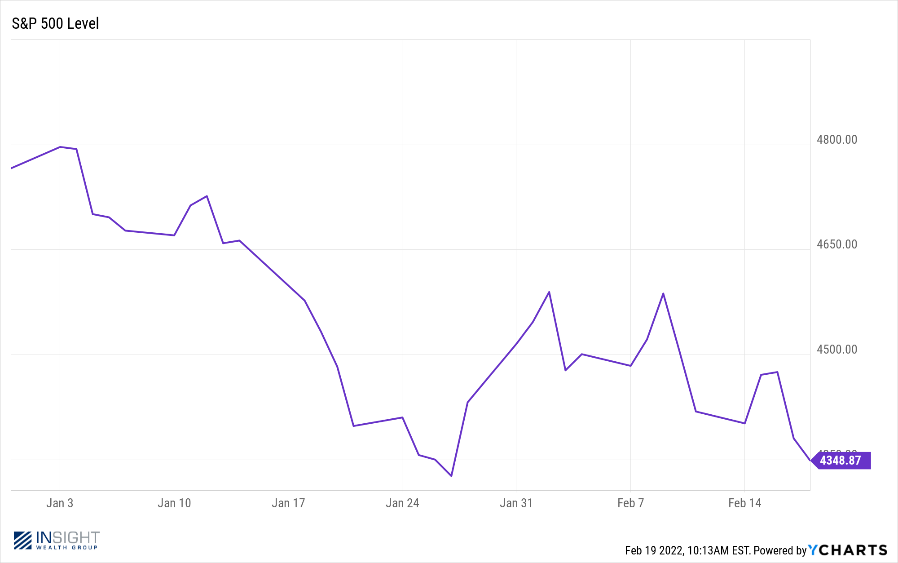 Neither of these stories are going away anytime soon. Who knows – Putin could have launched an attack by the time this memo is published! There will no doubt be volatility in the market if it were to happen. But there is a compelling argument that we are almost past the worst of it for the market. Why? As you have heard us say repeatedly, markets HATE uncertainty. And there is a lot of it today:

No one knows the answers to these questions. There is a ton of speculation. This is the perfect environment to be an “economist” on CNBC. There’s loads of drama and no risk of being held accountable.

But there is good news. The uncertainty that is causing the volatility? Its time is limited (at least on these issues). And there is a persuasive argument that coming out the other side of these concerns could be quite positive for the market. Let’s look at why.

The End of the Fed Scare?

The market has tied itself up in knots over the inflation and Fed rate hike issues. Lord knows we have talked about it in every memo since the start of the year. As we said last week: “Are you as sick of reading about it as we are of writing about it?”

But here is the thing: the market has convinced itself that the worst-case scenario is going to happen. We mentioned a few weeks ago that several big banks were now pricing in seven interest rate hikes next year. The chart below shows the market largely agrees. It is putting a 78% probability of six rate hikes this year and nearly a 50/50 probability of seven rate hikes.

The market may be right. But it is also possible they are overestimating the path which the Fed will take. And here is the thing: the market overestimating the willingness of the Fed to raise rates is not a new phenomenon. Look at the market’s expectation (gray lines) vs. what the Fed did (red line) from 2009 – 2017.

And we cannot forget what Chairman Powell said in January. Yes, the Fed can impact inflation by raising rates. But there will be natural curbs on inflation. They will take time to develop, but they will undoubtedly happen. And guess what? They are already starting to shape up.

Wait times at our major ports, which were a huge issue in the supply chain, are starting to return to normal. 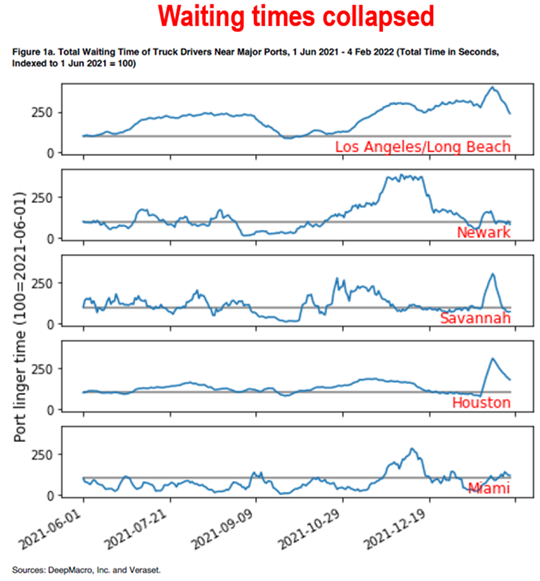 We have talked before about where inflation is coming from. Specifically, the largest spikes have been due to skyrocketing purchases of durable goods (think cars, furniture, appliances). As you can see from the chart below, durable goods spending in the United States is dropping dramatically back toward normal.

This is undoubtedly all going to take time to get back to where we need to be. We should not expect an immediate change in the inflation print next month, or even the month after. But we are clearly going in the right direction.

As all of this improves, we wait for the next Fed meeting in three weeks. Unlike last month, we are going to get a “dot plot” and investors are going to see just how severe the Fed anticipates rate hikes being. Maybe it will be six or seven hikes. We are not convinced, but it is possible. The thing is, as we showed above, that’s already priced in. There may be some volatility around finally getting the answer, but it should not dramatically affect markets.

But if the dot plot shows five, or four, or three rate hikes this year? Hang on! Markets would react very positively to that news. Long story short? The worst is already here on interest rates. It can only be the same or better from here.

As we noted above, the market has largely put the Fed conversation in their back pocket until the March meeting. The biggest antagonist to equity pricing today is the potential of a Russian invasion of Ukraine. To be honest, our opinion on this issue seems to fluctuate by the day. Some days it really looks like Putin is moments away from pulling the trigger. Others it looks like it may all be a ploy to get concessions from the West.

We do not know what he is going to do, and we do not trust anyone who says they do. But, as always, the market is a discounting tool, and it is discounting the cost of a Russian invasion into current pricing.

We did see an interesting chart – shared with us by our friends at TaiberKosmala – last week. Please do not misinterpret this as an argument for warmongering. Instead, it is an argument that the market prices in a lot of fear before a major military incursion, but largely moves on after the attack begins. As you can see below, when looking back at five of the most recent major military invasions, there has been a correction prior to the invasion in every cast. And there has also been a significant recovery after. 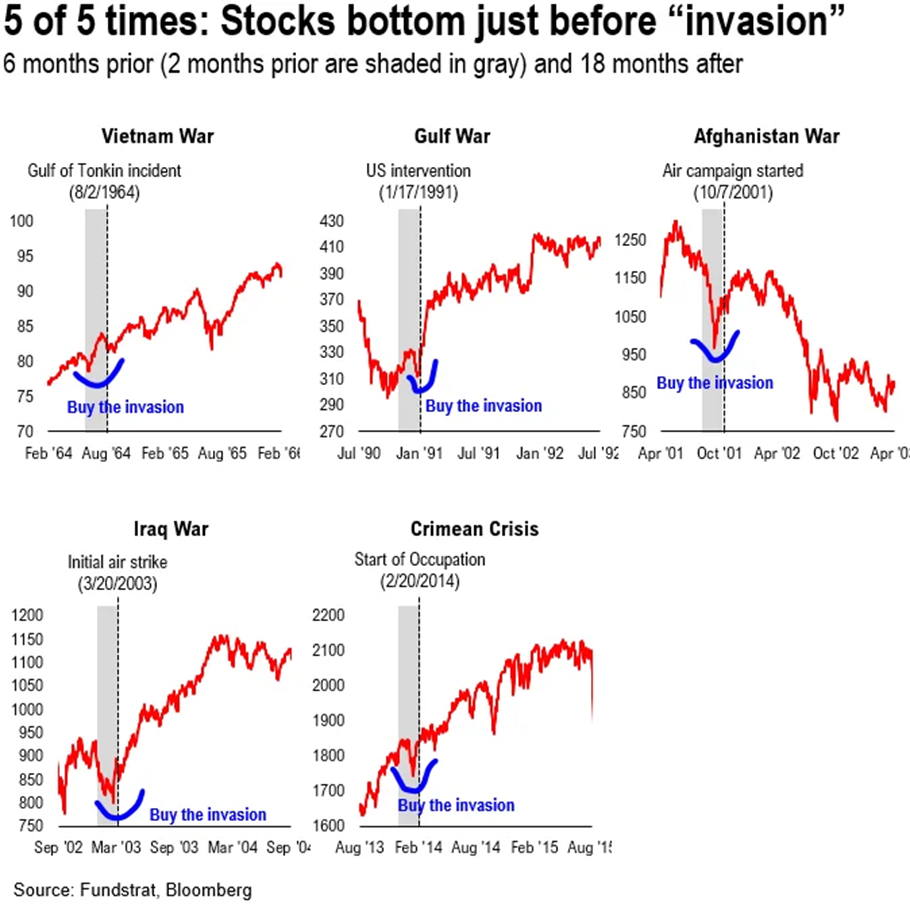 One way or another, simply knowing what is going to happen – and eliminating the uncertainty the market hates – will be beneficial. We have no idea when that will happen, but it seems to be getting closer by the day. And we would be surprised if this goes on for much longer.

So, set your calendars. March 16th is the date of FOMC’s interest rate decision. We would expect we will know on Ukraine by then as well. And then uncertainty can hopefully be replaced by solid information. That bodes well for the market and the economy.