The Weekly Insight: A Tale of Two Markets 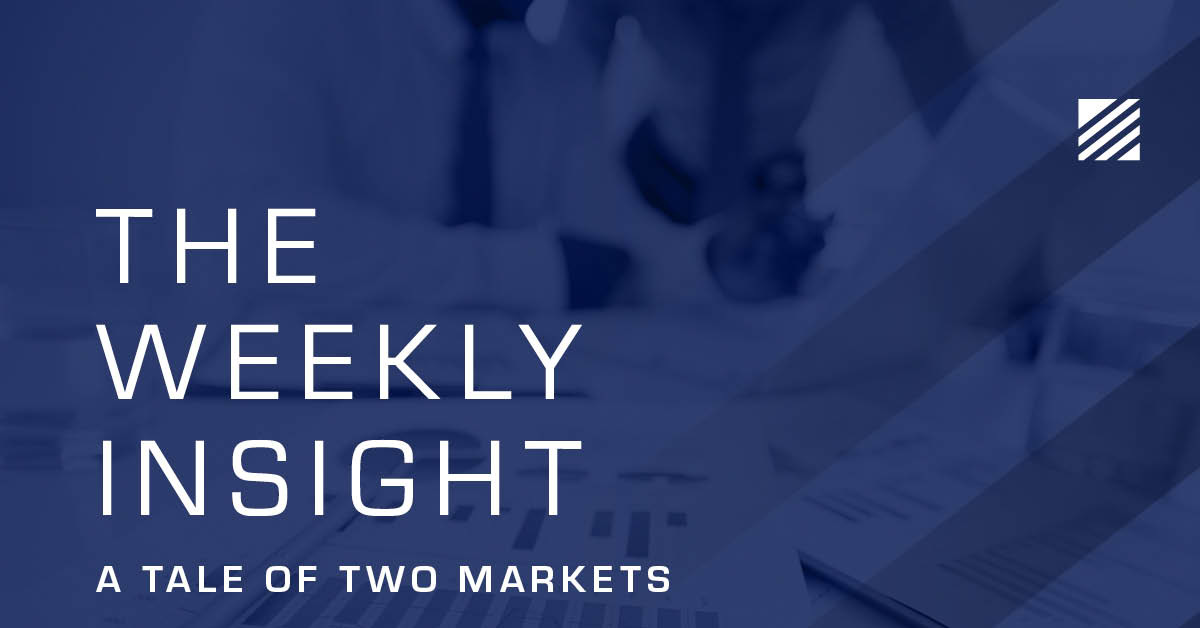 The Weekly Insight Podcast – A Tale of Two Markets

Phew. How’s everyone doing out there? Everything just feels…heavy… right now, doesn’t it? We had a conversation with a client the other day who said something to the effect of “First a pandemic, now a potential world war. What’s next? Locusts?”  Another described the feeling as “the weeks leading up to the pandemic.” We know how you feel.

And do not get us wrong. What may feel “heavy” right now here at home is disastrous for those in Ukraine. And frighteningly close for those in Europe. We do not have it too bad in retrospect. But there is no question the last few years are starting weigh psychologically on the world. And the markets.

Its times like these when we need to go back to our intellectual “home base.” For our clients, you know one of our core fundamentals is understanding – and contradicting – the fear and greed cycle. Last week was a fascinating case study in this area. There is plenty of fear – and it is all coming out of Moscow. But we have also seen several compelling reasons to be greedy as we look at the economy.

And so, it is a tale of two markets. The rapid – yet rather inconsequential – moves the market experienced last week were ample evidence. 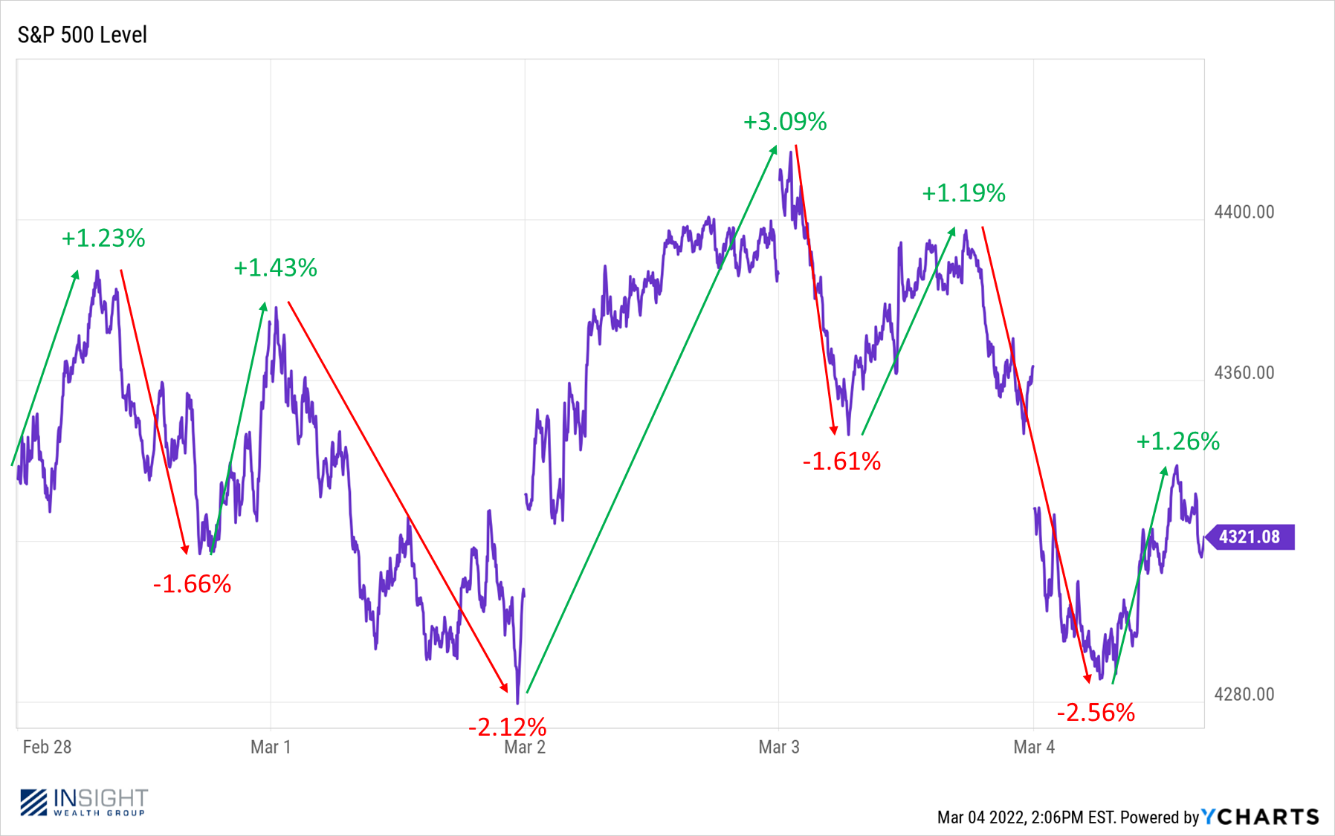 We have beaten the Putin/Ukraine/War/Sanctions story to death for a few weeks in this memo, so we will not retread already covered ground. But it is obvious what is happening is wrong. And brutal. And scary. The scary part is showing up in the markets.

That jump in the markets at the beginning of the week? It was driven by news that the Ukrainians and Russians were going to meet for peace talks. The midday drop on Monday? News the talks were going nowhere. And the biggest negative move of the week (-2.56% on Friday morning) was the result of overnight news the Russians were shelling a Ukrainian nuclear power plant. Nothing gets the markets heart racing more than impending radiological disaster.

As with any conflict like this, we need to take the information we receive (especially from social media!) with a grain of salt. And – no matter how much we support the Ukrainian cause – the economic case is not about what is happening in Ukraine, but instead about the world’s response and the risk of conflict between Putin and NATO.

Last week we wrote a memo outlining the economic response from the West to this invasion. We were critical of the current approach but noted that it could change quickly. It certainly did. Late last weekend and into Monday, the West dropped the economic hammer on Russia. It is not everything we would hope for – but it is a lot.

At the same time, President Biden and other NATO leaders have been clear. We will provide sanctions, arms, and humanitarian support. But no U.S. or NATO soldiers will engage in this battle. We are not at war with Russia and have no intention of moving that direction.

Is that the right approach? The wrong approach? Great question. There are excellent arguments on either side of the debate.

The bigger question? It is not what we will do. Instead, it is how Putin will interpret what we are doing. The French government released a statement last week saying, essentially, “we’ve declared economic war against Vladmir Putin.”  Not a smart move. It is not a long reach to imagine Putin viewing what we are doing today as a “casus belli” – an act justifying war. Telling him it is does not help.

On the other hand, what we are doing today is not enough to cause significant economic stress to the American economy. The markets? Yes. But not our ability to produce and sell our goods. So, we watch and wait. There will be scary swings in this process. Hopefully, logic – and the strength of the Ukrainian people – holds.

Amid all the fear, there was plenty of good economic news that helped buoy the market between fits of war news. The big one? Chairman Powell’s remarks to the House and Senate Finance Committees. The potentially more important thing? Interesting jobs data.

On the Powell front, interest rates continue to drive the conversation. That is no surprise to regular readers. But how they dominated the news this week was new.

As we have discussed in past issues, the debate is not over whether to raise interest rates. We know it is happening. And we know it is going to start at the next Fed meeting on March 16th. Instead, it is a question of scope: how aggressively, and how quickly, will the Fed raise rates.

We showed you the chart below a few weeks ago. It showed that the market was placing 78% odds on six interest rate hikes this year and nearly 50% odds on seven rate hikes. That is an aggressive path. It included 35% odds that the FOMC would do a “double hike” of 50 basis points in this month’s meeting.

Then Chairman Powell started his testimony this week. He was clear: we need to raise interest rates to battle inflation.

“We have phased out our net asset purchases. With inflation well above 2% and a strong labor market, we expect it will be appropriate to raise the target range for the federal funds rate at our meeting later this month.”

But then he did something we are not sure we have ever seen him do: he telegraphed this month’s meeting results to the committee.

This is, no doubt, a message to calm the markets fears. In essence, Powell is saying “Listen, I know you’re all freaked out about Russia right now. Just know, we must do our jobs. But we’re not going to pile on.”

This caused a significant shift in the market’s expectation for rate hikes. As you can see from the chart below, the odds of six interest rate hikes this year are down to 34.3%. And seven is nearly off the table. Only 20.8% odds of that happening in 2022.

Now, as we said a few weeks ago, we wait. What the Fed says on March 16th will be important. It could provide some fuel for the market. Or it could compound further the fears of a fast rate hike cycle. Powell’s comments would suggest the former.

The second big jump in the market came off the jobs report on Friday morning. The headline number was stunningly good. The U.S. economy created 678,000 jobs in February, compared to an expected number of 423,000. Even better, unemployment fell below 4% to 3.8%.

But the more important number was buried a little lower in the report. Average hourly earnings were flat. And year-over-year wage growth came in at 5.1% instead of the 5.8% that was expected.

We do not want to exaggerate here, but that’s rather good news. Wage growth is one of the biggest drivers of inflation. This is the first notable sign that inflation might be peaking. We have cited several other data points in the last few weeks that are, by our standard, leading indicators that inflation may begin to wane. This backs up that conclusion. And it is certainly favorable as we go into the upcoming FOMC meeting.

Where Do Go from Here?

So, we are left with two options when it comes to investing. One is the perfect example of a “Black Swan” – an unanticipated catastrophic event – for the market:  World War III or nuclear oblivion. Likely? No. But the odds are not zero, which means we need to pay attention.

The odds are much higher, however, that this ends how it always ends. We have never known a megalomaniacal dictator who has retired comfortably. This will end poorly for Vladimir Putin. And, when it does? The economic news continues to improve here at home. That is good for portfolios. We’re not gamblers. But if we were, we would take those odds.

For Our Iowa Clients: Tax Cuts Ahead?

Many of our Iowa clients likely saw the news that the Governor Kim Reynolds and the Iowa Legislature passed the “largest income tax cut in the history of the state.”  There are a couple of pieces to this legislation that are important:

Now we certainly do not want to be seen as skeptical, but 2026 is a long way away. Economic conditions change. The parties in power may change. We’ll keep a watchful (and hopeful) eye on this, but for most clients this new law will not impact your taxes this year.