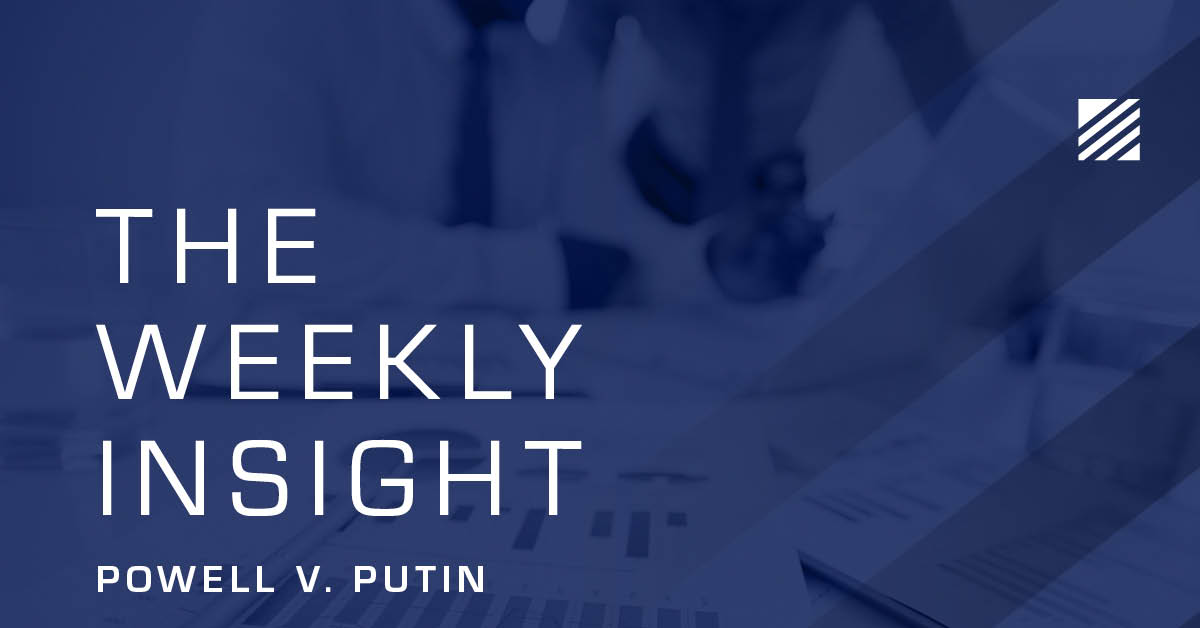 Shortly after our last memo hit the presses a week ago, the next economic weapon against Russia was unleashed by President Biden: a ban on the importation of Russian oil. Couple that with another bad inflation reading last week and it made for yet another up (and down, and up, and down) week in the markets. It’s all setting us up for an interesting week as we await word from the FOMC on Wednesday about what is going to happen with interest rates.

While we can’t tell you how things are going to pan out in Ukraine, or what the FOMC will do on Wednesday, we can get a better understanding of how these new data points are going to impact Americans and – by association – the American economy. And that may just give us some insight into what’s going to happen on Wednesday. Let’s take a look.

Before we can fully understand the ban on Russian oil products, we first need to better understand the U.S. energy economy.  It’s been a volatile few years in the energy markets and, as much fun as would be to blame Vlad, it is more directly tied to the pandemic.

Let’s start first with demand.  Demand for petroleum products in the United States has continued to grow, but at a slow rate, since the early 1990s.  In fact, going back to the earliest data point we have on the chart below, total oil product consumption has grown just 27% over the last 32 years, or a pace of roughly 0.87% per year.  This is a fraction of the demand growth for oil products throughout the rest of the world. 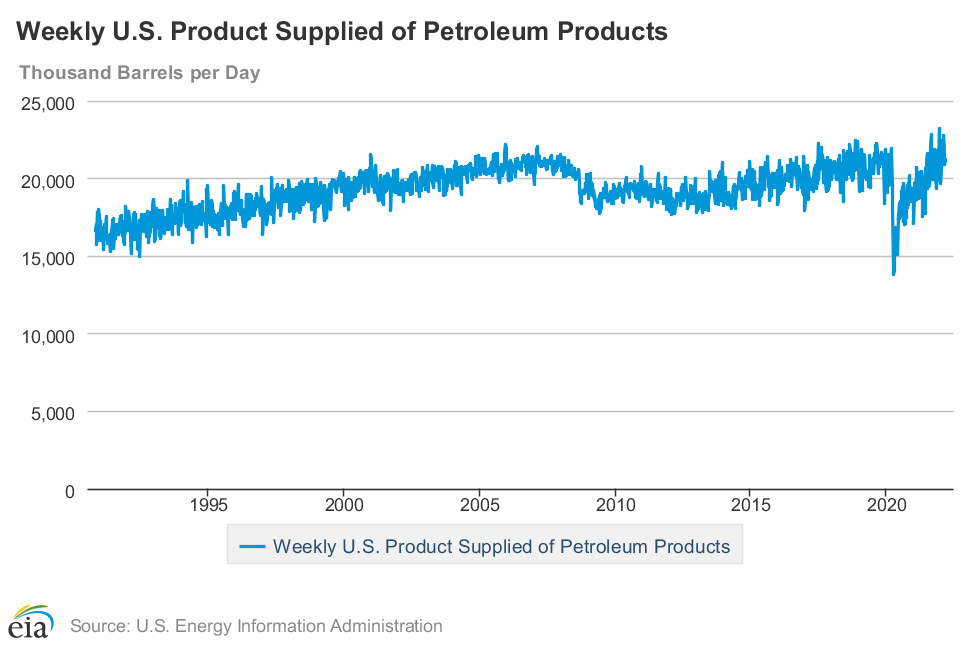 There is one important thing to remember, however: while demand can (and did) turn off and turn back on like a light switch, it isn’t that easy to do so with production.  In fact, production didn’t bottom out until it had dropped to 273,646,000 barrels/month in February of 2021, a full year after the pandemic started.  And now, two years later, we’re only back to 358,588,000, still 10.40% lower than pre-pandemic.

So, a shortage of oil, and embargo against a foreign adversary, and high inflation?  Sounds like a recipe for a repeat of the 1970s, right?  Not quite.  Because we also must remember that the U.S. energy picture is vastly different than it was in the 1970s.

Back in 1973, when OPEC announced its oil embargo against the U.S., we consumed 16% more energy than we produced.  Despite the geopolitical implications, that number didn’t improve over the next 20 years – it got worse.  By 2007 we were relying on imports for nearly 35% of our domestic consumption. Then came fracking.  This scientific advancement fundamentally changed our nation’s ability to be energy independent.  In fact, by 2020, we were a net exporter of energy products. 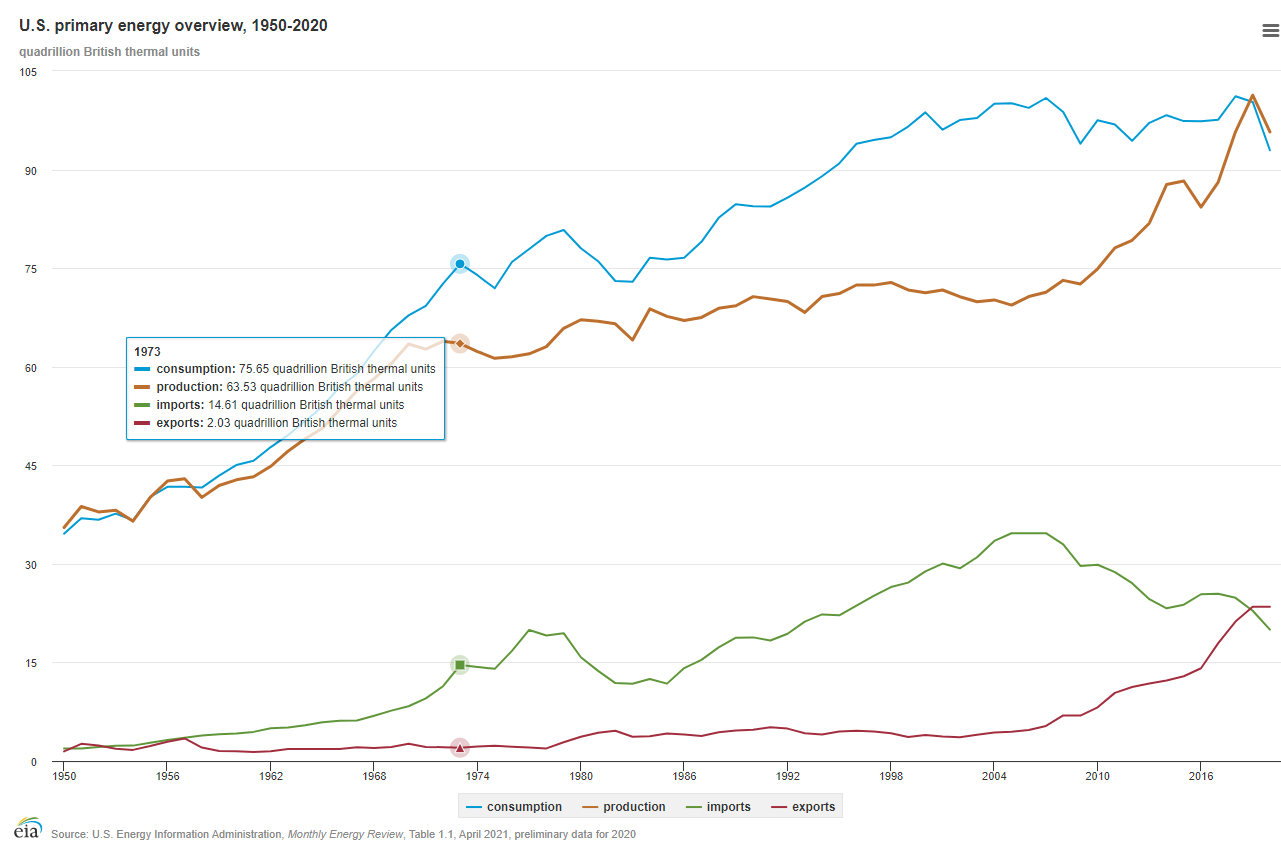 We are a much stronger energy economy than we were nearly 50 years ago.  But the ban on Russian oil products is not going to be without economic cost.  Our producers have ramped up production significantly since the shutdown in 2020.  But even today the number of active rigs in the field is nearly 20% below where it was pre-COVID. 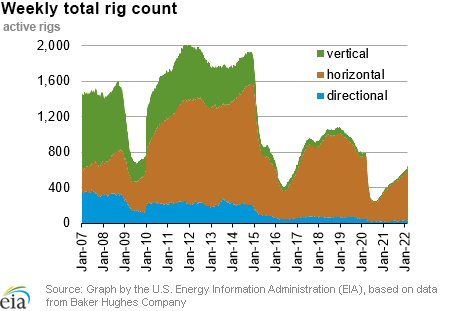 What will change that?  As the saying goes, the cure for high energy prices is high energy prices.  Producers who have avoided drilling new wells when the price of oil was stagnant in the $60 – $70 range are going to find it very hard not to drill when prices are at $120+/barrel.  But, as we’ve seen over the last 24 months, it takes time to get wells drilled, in production, and oil to refineries.  Right now, polling suggests the American people are willing to pay that cost to put Putin in his place.  A Wall Street Journal poll from last week showed 79% of Americans supported the ban, including 77% of Republicans and 88% of Democrats.  We finally found a bipartisan decision.  We’ll see how long that patience lasts.

As we head into “FOMC Week” in the markets, the economic fairies had one more bad news print for us on inflation last week: +7.9% in the month of February.  That is the highest number we’ve seen in 40 years and is enough to keep us guessing on what the Fed will do.

We’ve been talking for the last several weeks about some of the improving underlying issues surrounding inflation.  Wage inflation was flat last month.  Consumer purchases of durable goods have fallen rapidly. Manufacturer inventories are improving.  All of that is true and all of it is positive.

But it wouldn’t be fair to not address the Russian Bear in the room.  This war is going to have wider spread economic impacts.  The price of oil going up is certainly the big one.  Yes – it will impact consumers at the pump.  But it will also make it more expensive to move goods via ship, plane, train, or truck.

The war is also disrupting shipping lanes in the Black Sea and the Sea of Azov, but also via rail and air routes that pass over or through Russia.  As one company that trades shipping containers said, this “will only worsen the state of container pile-ups”.

The White House is already getting in front of this issue.  On Thursday, the White House Council of Economic Advisors tweeted out that they expect “substantially higher” inflation figures in the coming months and pinning the blame directly on energy prices.

That leaves us with the question of what the Fed will say later this week.  As we’ve said for some time now, the issue isn’t what happens Wednesday.  We all know that answer already.  It’s how many rate hikes they announce they expect to make throughout the rest of the year.

Last week we showed you the impact that Powell’s statements had on those projections, knocking the likelihood of seven rate hikes this year down to just 20.8%. As of late last week, that number had jumped back up to 33.3%.  We expect it may be higher before the Fed announces their decision.  A dot plot of 7 or more rate hikes would show the Fed is aggressively going after inflation.  Anything less may be chastised by the White House as they look to find a scapegoat for inflation leading up to the fall mid-term elections.

So now we watch and wait.  We’ll know a lot more by Wednesday at 1:00PM CDT.  That one press release may have a bigger impact on the markets this year than Vladimir Putin.