The Weekly Insight: A Spoonful Of Sugar 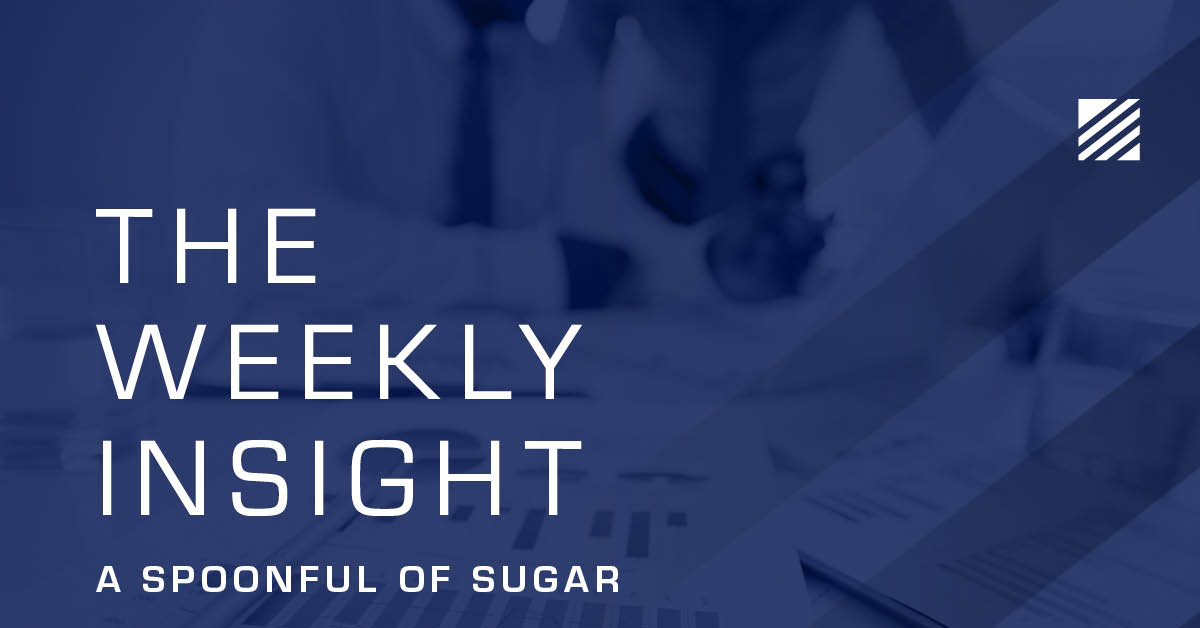 The Weekly Insight Podcast – A Spoonful Of Sugar

Last week was the one we’ve been waiting for. In fact, a month ago we wrote a memo titled “Mark Your Calendars” – entirely focused on last week. At that point in time, Russia had not yet invaded Ukraine (although it was a big topic). But the most important market driver – in our opinion – was going to be what happened at the March 16th Federal Reserve meeting. Well…now we know! And the reaction from the market is surprisingly positive. Let’s look this week at exactly what they said and what it means going forward.

Much like pretty much everyone expected, the FOMC voted to raise rates by 0.25% last week. Not a shocking surprise. You may recall us mentioning that Powell said exactly that in his testimony to Congress a few weeks ago. And while there was one dissenting vote who wanted to raise rates 0.50%, we got what we expected. What the Fed did last Wednesday was not going to be the news. The news was going to be the Fed’s message about what is coming next.

And, for all the Fed watchers out there, the big thing to pay attention to is the “dot plot” which shows (anonymously) the FOMC members opinions on where rates are going next. As you may recall, we have talked a lot about how inaccurate the dot plot is as a forecasting tool. But just as a reminder, here was the dot plot from September of last year. 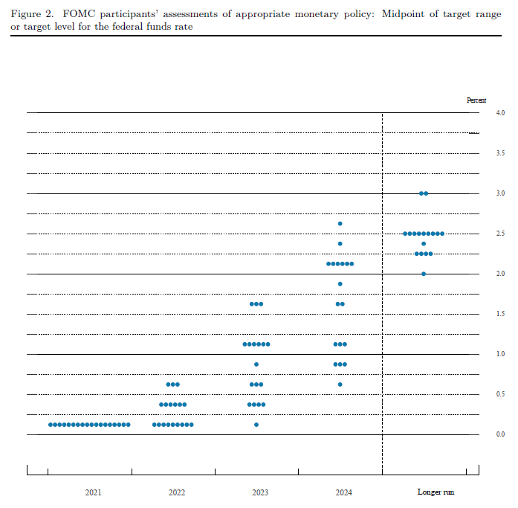 That’s right. Six months ago, the fully 50% of FOMC members were anticipating ZERO rate hikes in 2022. The median expectation was for one rate hike.

And now here we are today. Let’s look at the new dot plot. 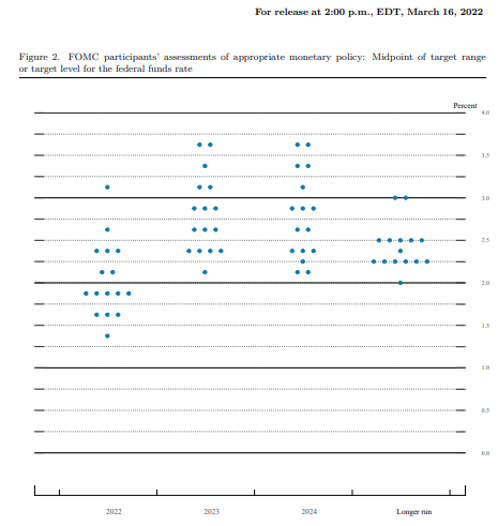 As you can see, it is kind of a mess. One member – we are assuming it is the same who voted for the 0.50% increase – is assuming the Fed will raise rates 3.0% this year. that would mean they would have to do five 0.50% increases and one more 0.25% increase yet this year. We will assume that is unlikely. But if you just look at where the most members of the Committee are today, it will mean raising rates to roughly 1.75% – 2.0% this year. That means raising rates in every meeting for the rest of this year by at least 0.25%.

If you held our feet to the fire early last week and said, “how will the market react if the Fed announces they’re going to raise rates seven times this year?,” we would not have answered it correctly. But sentiment is a strange beast. We noted in our memo last week that the markets sentiment was shifting and the odds of a seven rate hike year were increasing. In the end, the market liked what it heard and rallied for the week. 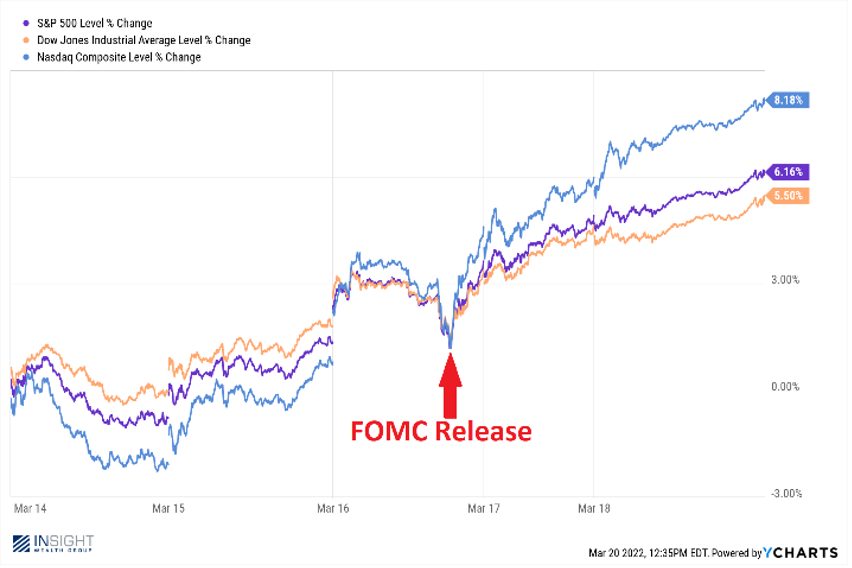 Maybe more important, we saw the VIX – a measure of volatility in the market – take a tumble. As a reminder, this typically is a number we want to see lower, not higher. And as of Friday, it is sitting roughly where it was before the correction started in January. 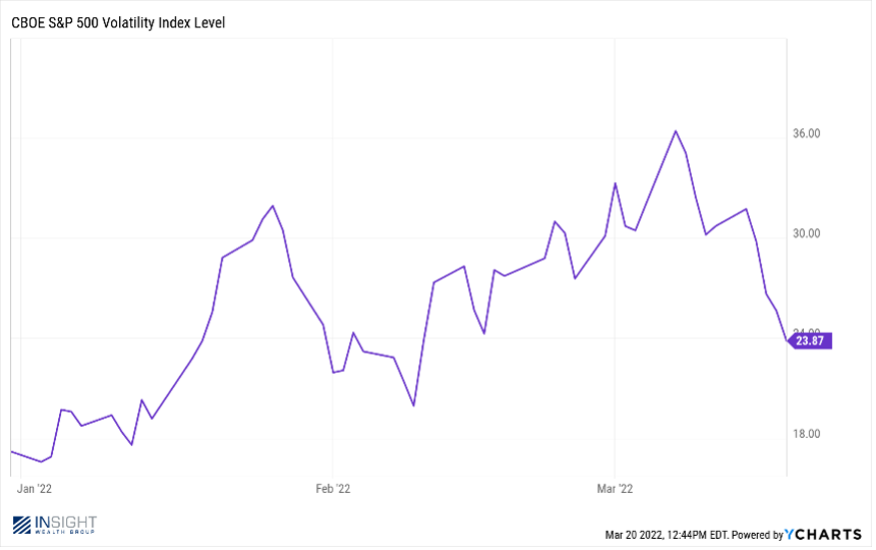 Each of us has dealt with difficult medical issues – either personally or through a close friend or family member. One of the things we have noticed in those situations is that not knowing can be the hardest part. Getting a diagnosis – and digesting the prescribed course of treatment – can take a lot of the weight off the situation. That’s what happened with the Fed last week.

But the other thing we would highlight is this: the Fed did not just give us the medicine. As the old song goes, they also gave us a “spoonful of sugar” to help it go down. It started with the press release announcing these changes, which the FOMC opened with this line:

“Indicators of economic activity and employment have continued to strengthen. Job gains have been strong in recent months, and the unemployment rate has declined substantially.”

It continued in Fed Chairman Powell’s remarks after the release. He noted a few important things:

Now begins the process of threading the needle. Raise rates too fast, and the economy could stall out. Powell seems emphatic that is not a significant risk right now, but it is something worth monitoring. But raising rates too slowly could allow inflation to run amok.

It is a difficult position for investors. But it is clear from Powell’s remarks that now is not the time for panic. Instead, it is a time for a thoughtful and measured approach to portfolio construction. As we have said before, this year is not going to be as “easy” as last year. We are going to have to work hard to make a buck in this market. But the opportunities continue to be there for success.