The Weekly Insight: The Cost of Omicron 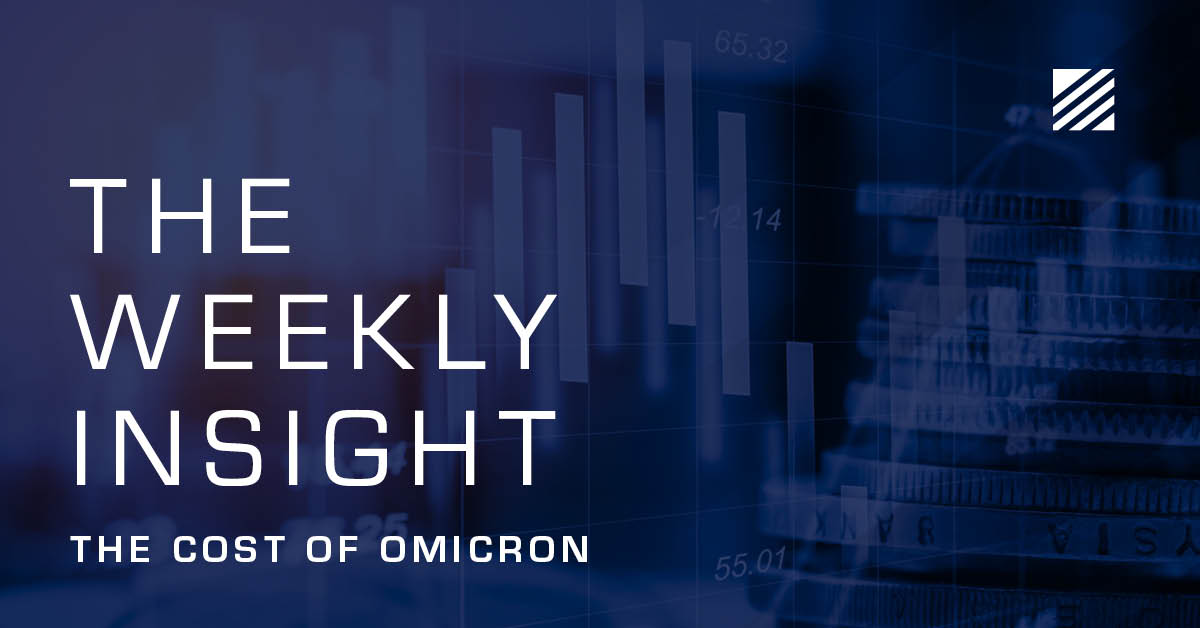 First, we want to start this memo by apologizing. We wrote a memo last week. We posted it to our website. We even sent an email to clients linking to it…only the email didn’t go out. We had a technical glitch and did not notice it until later in the week when it was a bit too late to send it. As such, if you’d like to read last week’s Weekly Insight, you can do so by clicking here.

It’s too bad, because there was a lot of meat in that memo that we need to follow-up on this week. So, for those of you that found it online, there may be some “repeats” in here.

This is no surprise to regular readers of this column. The Federal Reserve – and their easy money policies – have been a huge driver in equity market returns over the last two years. The reversal of that policy is going to be one of the biggest drivers of performance in 2022 and beyond.

The analogy here is this: over the last two years the Fed has been the pilot of a plane (the economy) that has taken considerable damage throughout the flight. The excellent skill of the pilot and crew has kept the plane aloft and they have safely made it an airport. But now they have to the land the plane.

Fortunately, the economic recovery is well underway. We have record levels of liquidity in the system, people are going back to work, and anticipated earnings continue to be strong. It has been said before that landing a plane is nothing more than a “controlled crash.” While the recovery continues, this must still be a skillful approach.

The market (i.e., the passengers) is looking to the cockpit for guidance on how this is all going to work out. The problem here is the guidance is shifting. And it is important to understand what is different about the Fed’s intentions today vs. just a few months ago.

We have talked a lot about the “dot plot” in these pages. In fact, just a few weeks ago we broke down just how bad of a planning tool it is for investors. We will give you a quick example of why. The chart below is the dot plot from September 22, 2021 – just less than four months ago. As you can see, nine members (50%) of the Federal Open Market Committee (FOMC) believed there would be ZERO rate hikes in 2022. Six members (33%) anticipated one 0.25% rate hike. And just three members anticipated two rate hikes. 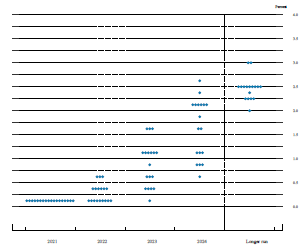 Last week the Fed released their minutes for the December 15th meeting (just 3 months later). My how things have changed. There are now ZERO members that expect no rate hikes. And most of the committee (10 members) are now anticipating three rate hikes for the year. 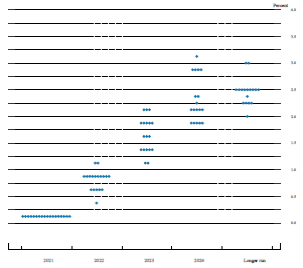 And that was December. You will note that there were only two members in December who anticipated four rate hikes. Just this week there was, as YahooFinance described it, a “chorus of officials (who have) floated raising rates in March and the potential need to hike four and even five times this year.”

The message is shifting as the Fed responds to the issues on the ground – especially inflation. And anyone who tells you they know exactly how the Fed is going to act this year is dreaming. As you can see from the data above, even the Fed does not know how it is going to respond. The crosswinds are changing, and they are trying hard to feather the engines for a smooth landing. We will not know how well it went until the plane is on the ground.

Much like the rest of the world, we are feeling the strain of COVID again here at Insight. Several members of our team – or their family members – have come down with the virus. Thankfully, the expectation that this strain would be less virulent has remained true (so far) and everyone is doing well.

But this new wave of the virus has certainly caused businesses to readjust their operations. More employees are working from home again as they or family members recover. Less customers are coming to businesses as they deal with the virus. We are starting to see more masks around again. You get the drift because you are living it as well.

This is instructive, however, for what our expectations should be for the economy. Let’s look at a few numbers. 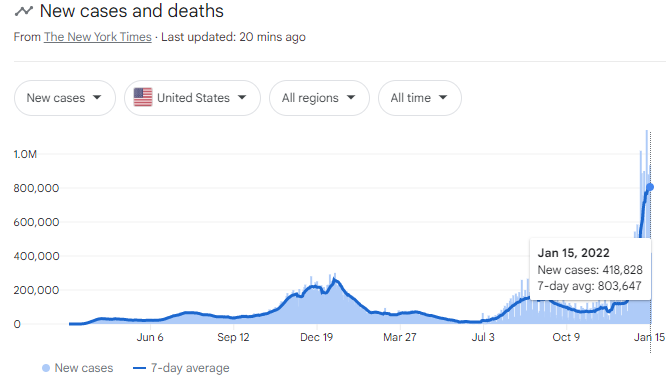 As of Saturday, our 7-day average of cases was 803,647 per day meaning we had 5,625,529 confirmed cases over the last week. But that does not really tell the whole story. Back in September, the CDC released some data which stated that – for the Delta variant – they believed only one if four cases of COVID-19 infections were reported. We would argue that for Omicron (less symptomatic, harder to get tests, etc.) that number is likely significantly higher. But let’s stick with the CDC’s 4x number.

If that is the case, that means 22,502,116 people were infected with COVID in just the last seven days. Theoretically, each of those people needs to isolate. When you consider that roughly 65% of the U.S. population is in the workforce, that means we could expect more than 10,000,000 people to be out sick just in the next week.

Let’s take that back a little further. If we go back to Christmas Day, we have had 13,400,000 positive COVID tests in the U.S. Using that same (again – likely low) 4x multiplier, we get to nearly 54,000,000 infections in less than a month. And using that 65% figure, that means there were nearly 35,000,000 million workers who (should have) been out of the workplace for at least five days. Even if only half of those folks called in sick, that is more than 87,000,000 working days missed. When you consider the average daily GDP of an American worker is roughly $165 per day, that means this current wave – as mild as it has been – likely had an impact on GDP of more than $14 billion. That’s not chump change.

The good news? The U.K example. Their big surge started on December 14th. Their seven-day average peaked on January 5th and has been falling rapidly since that time. It took 22 days to go from the beginning of the cycle to the peak. Our rise in cases started, arguably, on Christmas Day. 22 days later was this past Sunday. It is hard to say yet if we have peaked, but case counts seem to have leveled off. Hopefully, we will see a mirror of the U.K. trend.

In the meantime, all of this comes at a time when we are worried about inflation. Let’s remember what inflation is: too much money chasing too few goods and services. Want to find a way to further reduce the goods and services available? Take 35,000,000 workers out of the workforce for a few days. We would suggest this is exactly why the Fed is getting more hawkish on interest rate policy. We will know a lot more on that front when the Fed releases their next set of minutes next week.

Until then, we hope you are staying healthy. Let’s keep our fingers crossed that Omicron is really the wave that spells the end of this pandemic. We are as sick of it (pun intended) as you are!