The Weekly Insight: Spring is Here 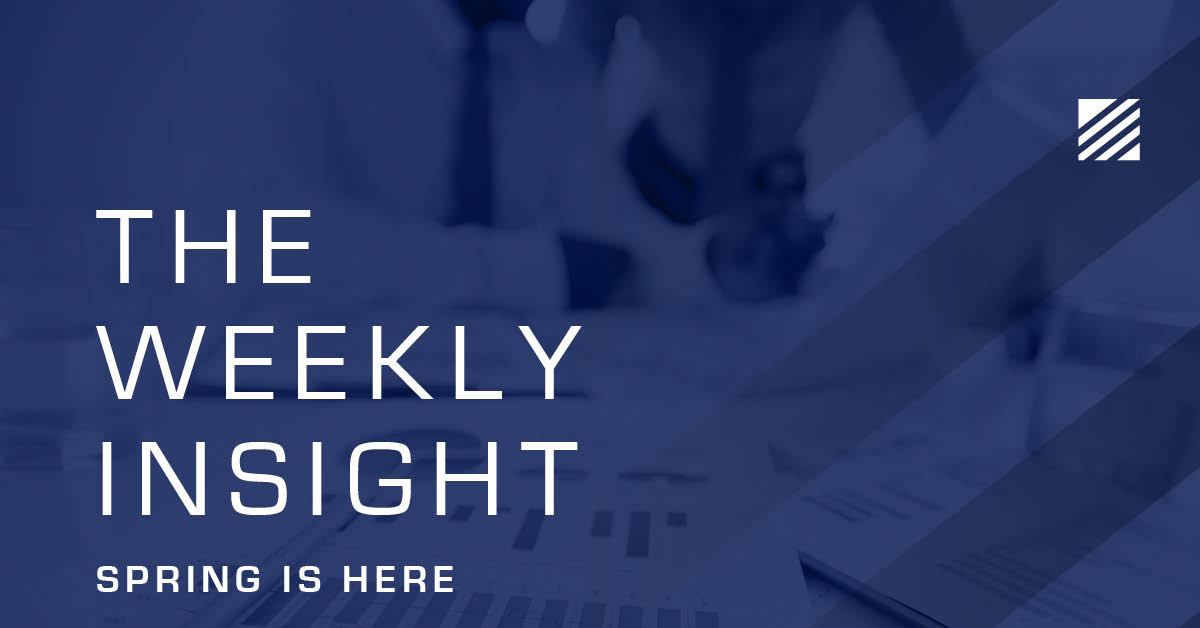 The snow is melting, and the sun is out. It may not technically be spring, but here in Iowa, we have a bit more pep in our step after what was as long and cold winter. The market may not have gotten the hint this week, but the world just seems a little brighter these days. COVID cases are dropping, vaccine distribution is improving, employment numbers are surprising to the upside.  After the year we’ve had, sometimes you must take the good and relish in it. That’s what we are going to do this week.

Next week will mark one year since the “15 Days to Stop the Spread” campaign.  We do not know about you, but it seems like it has been a long 15 days!

While we are certainly not out of the woods yet with the virus – or its economic impact – the light at the end of the tunnel gets brighter and brighter every day.  COVID case counts continue to drop across the United States and now find us moving rapidly toward pre- “Second Wave” lows.  Projections for the path ahead look quite positive. 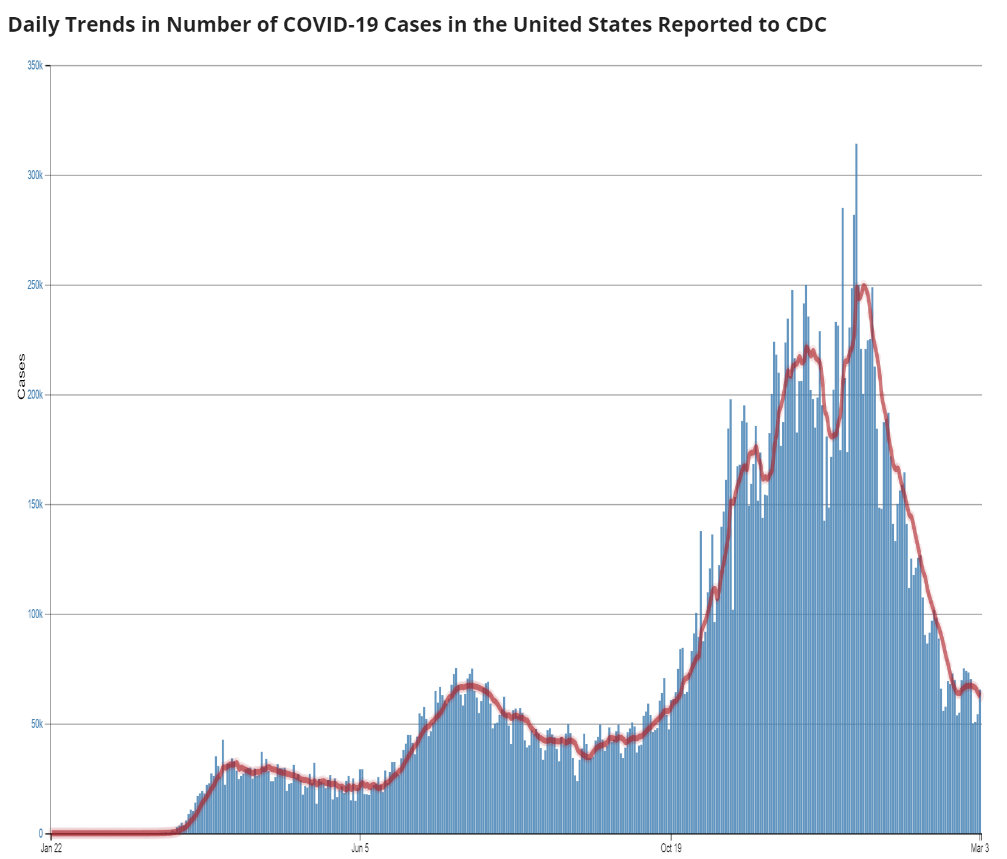 This has undoubtedly been helped by the rapidly improving distribution of the COVID-19 vaccines available in the U.S.  The Moderna and Pfizer vaccines have now been joined by a third approved vaccine – made by Johnson & Johnson – which means more available production and distribution.  You may recall that President Biden announced shortly after his inauguration a goal of distributing 1.5 million doses per day by the end of his first 100 days in office.  We just surpassed 2 million doses per day late last week. 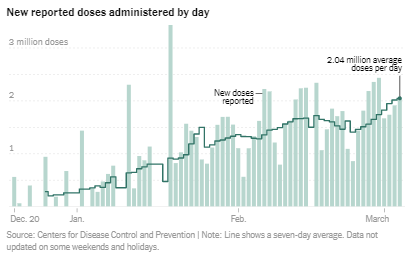 While this is certainly good news, it is important to remember this is an expectation of the stock market this year – not a surprise.  While a continued recovery from the virus should mean sustained economic growth, we must remain vigilant about the downside here.  A new spike in cases, a vaccine resistant strain of the virus, or other problems have the potential to create negative volatility.  We are not out of the woods yet.  But we are getting close.

The political dance continued in Washington last week as the House and Senate both passed their version of President Biden’s $1.9 trillion stimulus bill.  The debate in the Senate picked up at the end of the week and that’s where the serious horse trading starts to happen.

The two big tickets items being debated in the Senate were the Bernie Sanders amendment to add a $15 per hour Federal minimum wage and the extension of Federal unemployment benefits.

As expected, the Sanders minimum wage amendment failed.  While it was no surprise that the Republicans opposed the amendment, it is notable that eight members of the Democratic caucus voted against the bill led by Weekly Insight favorite Joe Manchin of West Virginia.

Manchin was also at the heart of the debate over the extension of Federal unemployment benefits.  Liberal Democrats wanted $400 per week benefits through September of this year with the first $10,200 being income tax-free.  Republicans are supporting a $300 per week extension. Manchin and the Republicans won this argument, but it was largely performative debate.  With roughly 13 million workers receiving these benefits, we are talking about a total difference in cost of roughly $34 billion.  While that seems like a lot of money, it’s just 1.8% of the total amount being considered in the stimulus bill.

In the end, the stimulus bill passed the Senate.  Speaker Pelosi has made clear the House will pass whatever the Senate completes and should do so on Tuesday.  We have praised Congress in the past on how quickly they responded initially to the onset of COVID.  The $2 trillion CARES Act was necessary and important when it passed last April.  As you can see from the chart below, however, we are now adding an additional $2.8 trillion (assuming $1.9 trillion in this package) after the worst of COVID has passed.  While we do not love what this means in the long-term, there is no question Washington is flooding the zone with capital.  That should be good for the markets. 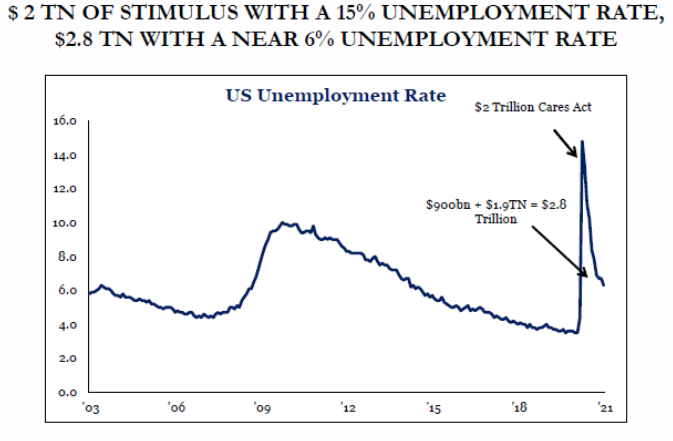 Despite all the good news, the biggest issue in the markets this week continued to be the discussion of how much – and how soon – inflation will hit.  Bond yields continued to spike, and the markets suffered. 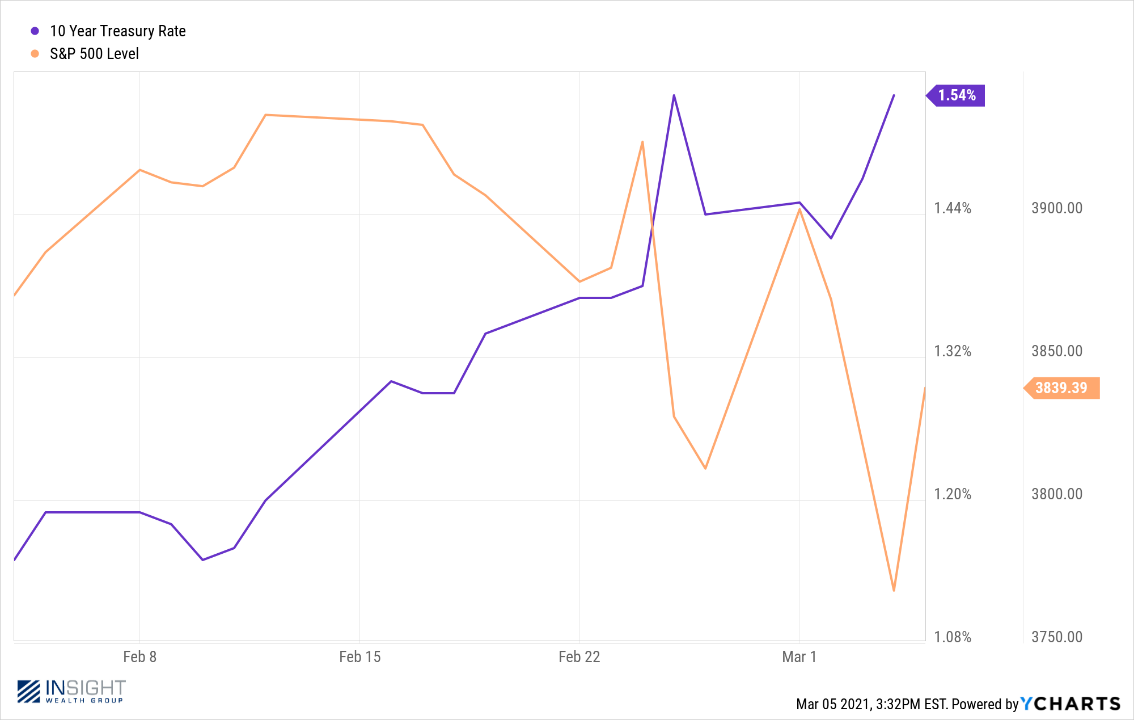 We discussed this issue in depth last week, so we won’t put you through that trial again this week – but we would encourage you to read last week’s memo here if you haven’t yet had the chance:  The Weekly Insight:  Inflation Fears.  We will just reiterate what we said last week – and Fed Chairman Powell said this week:  Inflation is coming.  Interest rate hikes are coming.  But we are still a long way off from that having a profound impact on the market or economy.

In the meantime, this conversation, along with the weakening dollar, has been very good for our international and commodity exposure in the market.  You may recall we made a significant change to portfolios a few weeks ago which included an overweight to both of those sectors as well as a reduction in weight to our large cap growth positions.  As you can see from the chart below, those decisions have been timely. 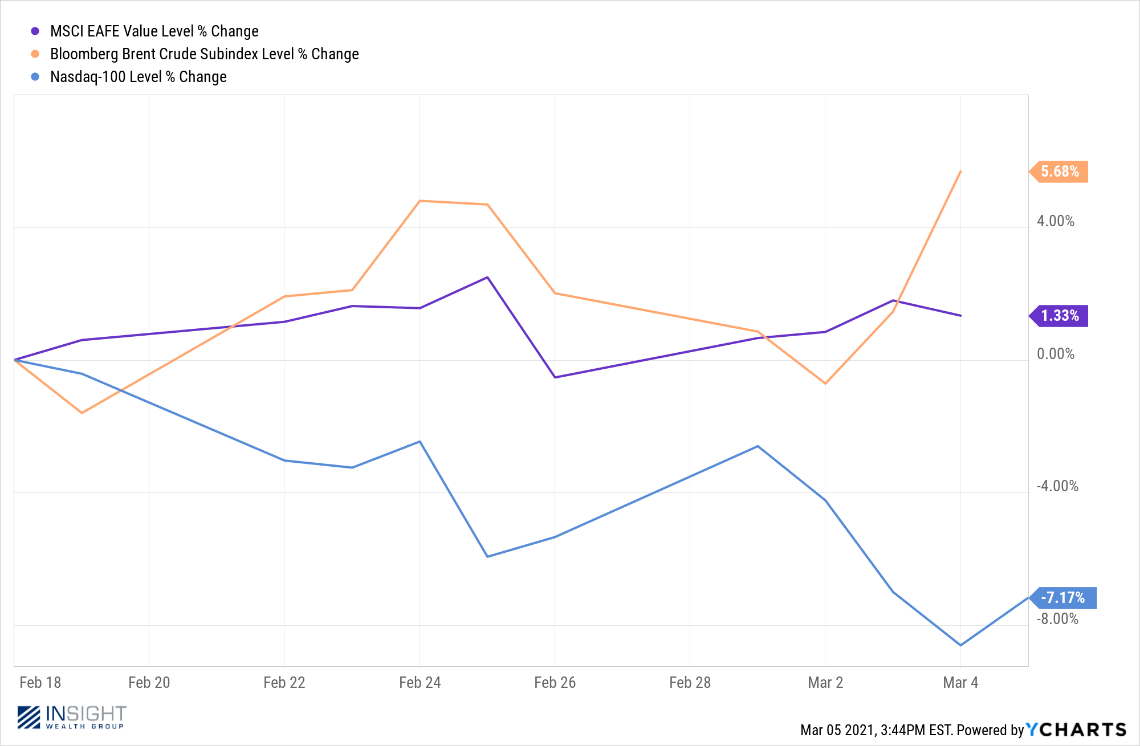 So, while the market has retreated a bit from its highs, the overall picture remains positive.  The main thesis this year will continue to revolve around COVID recovery, low interest rates, and federal stimulus.  As all three of those pillars remain intact, we remain optimistic.

There are a lot of old Iowa farm kids at Insight.  We know that the onset of spring – after a long winter – means the start of a new growing season and new opportunities.  There are risks that come with it:  hail, drought, floods, etc.  But there is opportunity.

That’s where we find ourselves with the U.S. and world economy today.  Spring is upon us.  That does not mean the risks are gone, or that everything is straight up from here.  But there are opportunities ahead of us and we are looking forward to getting our hands dirty.