The Weekly Insight: Quite The Week 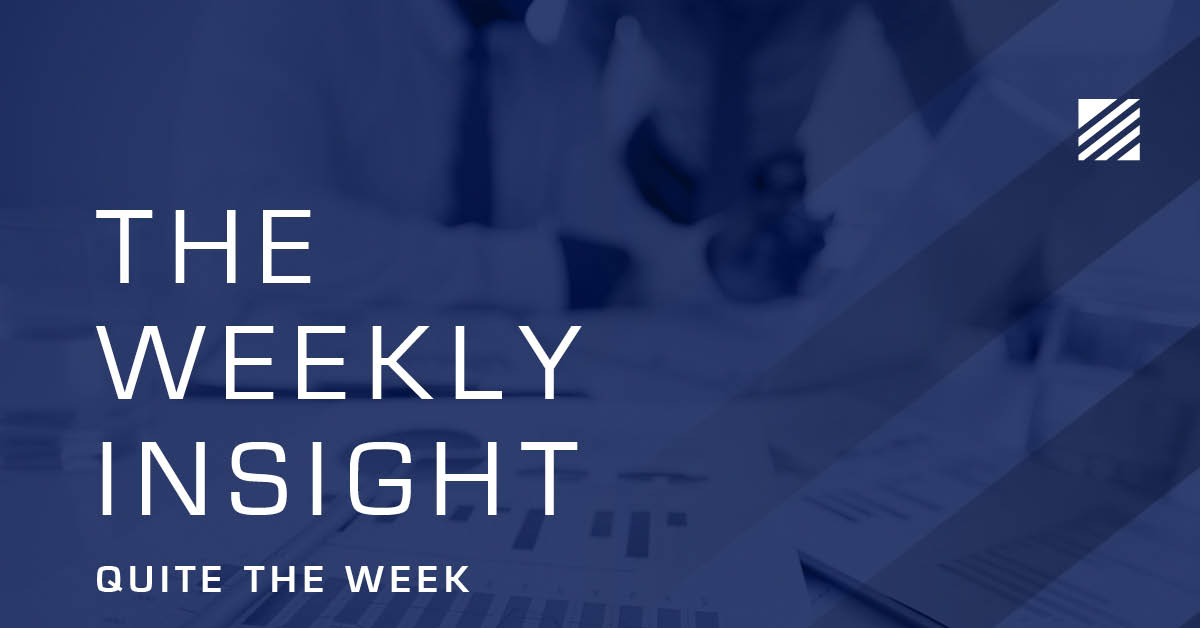 We had a plan for this week’s memo. We sent our talented analyst – Bryson Hamilton – hunting for good data to help explain our expectations for the economy in 2021. It was going to be a “facts and figures” memo. We will still get there – but last week was so consequential, we cannot just skip right over it. No matter how much we just wish we could forget it happened.

Insurrection at the Capitol

You’ve figured out by now – if you’ve been reading these memos – just how important we think the intersection between Washington and Wall Street is. Frankly, we wish it weren’t so. But we have reached a stage in our history where Washington’s influence on policy has a more substantial impact on our economic condition than at any other time.

So, as we entered the week, we knew (as we stated in last week’s memo) that politics was going to have an impact in the market’s performance. It did – and did not – in ways that may seem surprising to you.

First, we had the Georgia Senate run-offs on Tuesday. As everyone knows, the Democrats won both races and now control the Senate, House, and White House. We have stated this before, but we will drive this point home one last time: while we would much prefer divided government, the result we have today has nearly the same impact. If Senate Democrats do not find enough votes to end the filibuster (something we see as very unlikely) their ability to enact extreme policies is severely limited by the 60-vote threshold needed to pass legislation.

No one could have imagined, however, the Georgia race would be the least significant political event of the week. The disgusting display we saw at the Capitol on Wednesday was, frankly, an earth-shattering event. It will impact our politics for weeks and years to come. Just as it will impact our position on the world stage. Five people died in a storming of the United States Capitol Building. Just writing that sentence makes us depressed. The last time a sentence like that was written was 208 years ago.

Where do we go from here? Much like you – and everyone we have talked to in the last five days – we really do not know. The big questions at this point are:

The first two are unanswerable at this point. We would hope President Trump will take the high road and encourage his supporters to embrace our tradition of a peaceful transition of power. Given his remarks on Wednesday, we cannot count on that being true.

As crazy as it seems to say this, consider this statement: There was a riot at the United States Capitol Building, which caused the evacuation of Members of Congress and our Vice President. The markets ended the day – and the week – up.

Yes, there was certainly a correction after the riots started, but not even enough to cause the S&P 500 to be down for the day. How does this happen?

The best answer we have for it is two-fold:

As we stated above, we have no idea if the first answer is correct. The second is worth digging into. Why would the market assume Democrat control of government is a positive?

The best answer we have heard for this was given to us by our good friend Phil Kosmala. He described it as a “sugar high”. The market is realizing the Democrats will push aggressively for more fiscal support from government – specifically in larger personal checks to citizens and a substantial ($3 trillion) infrastructure bill. That kind of money flooding out into the streets is good for the market.

If you combine that with a hopeful restarting of the economy from our current pandemic, it is giving the market significant optimism heading into 2021. We concur. This market has legs for the meantime.

The problem with a “sugar high” is that it is not good nutrition! It does not sustain you. Eventually this will lead to inflation and trouble in the equities markets – but that is not going to happen for some time. Right now, inflation sits at 1.1%, well below the Fed’s long-term goal of 2% and increases are expected to be minimal over the near-term as pandemic concerns persist through the winter months. When looking at the minutes from the Fed meeting this week, several members are not expecting inflation to reach the goal until 2023.

The December FOMC minutes were released on Wednesday, as we noted above. This is one of the most important documents we look at on a regular basis because the Fed’s decisions on interest rate policy have a direct and profound impact on equity markets. The lower and longer the Fed keeps rates, the more justification there is for an expanding equity market.

The biggest take away from Wednesday minutes: not much has changed. They acknowledged that market sentiment has continued to improve as reduced uncertainty related to the election and virus outweighed the anticipated impact of the ongoing surge of virus cases. But they also recognized that uncertainty remains high as the outlook remains tied to the path of the virus.

They continued to maintain their target Fed Funds rate at 0% – 0.25%, the same as it has been since the onset of the virus, and plan to be here until they see inflation above 2%. We have long stated that the Fed was the worst at predicting what the Fed would do – and the market tends to have a better feel for the situation. As you can see from the chart below, both the Fed and the market agree – we are going to be in a low-rate environment for some time. At least until 2023. 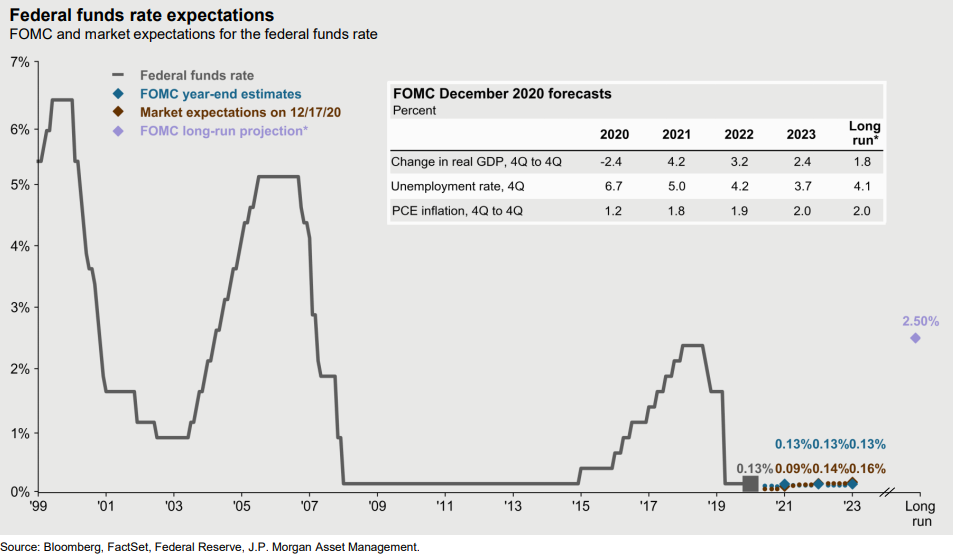 The other item driving the market – beyond expectations of government spending and low interest rates – is expectations for an earnings recovery in 2021. Right now, the earnings decline for 2020 is estimated to be 13.3%. We will know more on this number in the coming weeks as we begin to see the results of Q4 earnings.

2021 is supposed to be the year we return to growth. The caveat to that is what we noted above: limited political turmoil and a successful vaccine distribution program. The market is assuming that ends up being the case right now. In that environment, current expectations are for 22.6% earnings growth in 2021 and revenue growth of 8.2%. Both would be a big boon to equity portfolios. 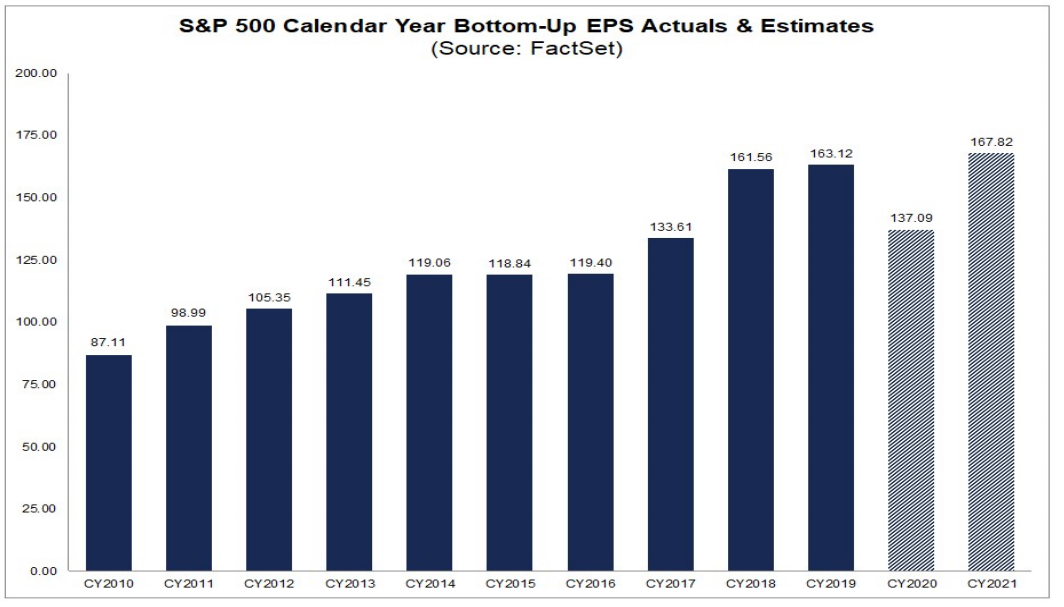 The one area of portfolios impacted by the turmoil in Washington this week was Boyle’s holdings of Fannie Mae and Freddie Mac shares. We have discussed this many times in the past few weeks as it seems we are getting close to an outcome from D.C. on this matter. The unrest in Washington essentially freaked out the market for these two stocks this week as shareholders worried that Treasury Secretary Steve Mnuchin may resign in protest and/or the violence this week might move the resolution of this item down the priority list.

As hard as it is to be patient in this case, we think it is justified. We passed along a statement from our pastor last week when, referring to the New Year he asked, “Other than the calendar, what has really changed?”. We would say the same about Fannie and Freddie. What changed this week? The desire of the Treasury Department and FHFA to get this completed before a Biden administration did not change.

Secretary Mnuchin had been traveling overseas last week. After the riots in Washington, he noted at a press conference, “I look forward to continuing our work. I look forward to getting back to Washington D.C. with our continued work on the transition.” We are hopeful that means some answers on Fannie and Freddie very soon. The clock is ticking.