The Weekly Insight: Not So Great Britain 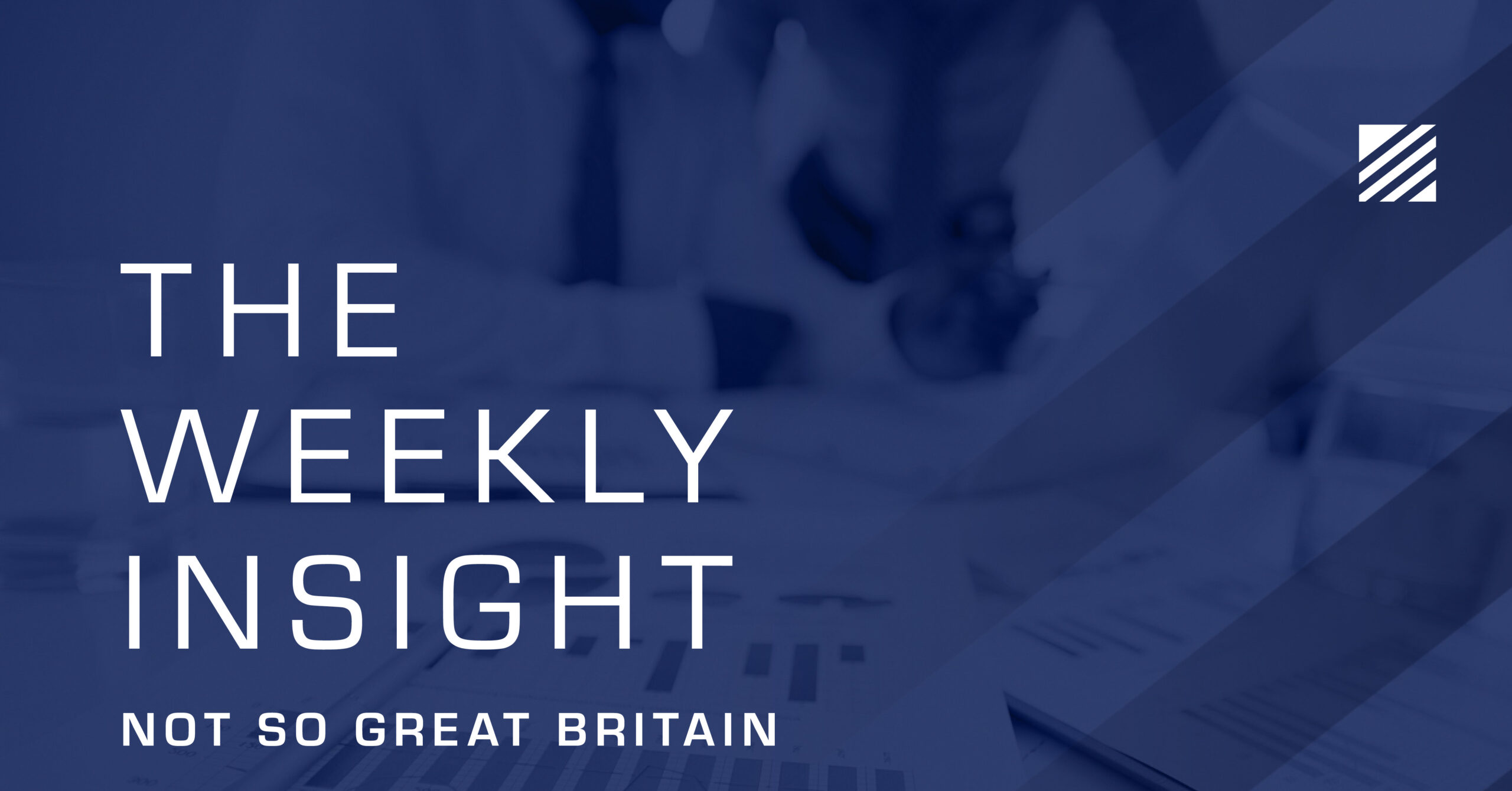 The Weekly Insight Podcast – Not So Great Britain

It has been a rough run in the market so far this year. No question about that. In fact, last week, we set a new “all-time record”: the first time we have had three consecutive negative quarters of both stock and bond performance. We have talked for a while about the “why” and not much is going to change that until we get the solution to breaking out of our “inflation – interest rates – recession” cycle. The next potential break is not until we get the September inflation data on Thursday, October 13th and the mid-term elections on November 8th. Until then? Expect some volatility.

So, while we wait (and wait) for inflation to regress, we wanted to take some time this week looking outside of our borders. As much time as we spend focused on U.S. policy and economic condition, it is important to remember a few facts.

What is happening elsewhere in the world matters. As much as some would like to isolate the United States, we cannot. The rest of the world are our customers and how they fare will impact our financial health as well.

A World in Disorder?

There is a tendency to think negatively about world affairs as they happen. Just pick up a newspaper or turn on the cable news and you will be bombarded with articles about “Putin Threatens Nukes” or “China Threatens Taiwan”. We could author a book breaking down all the concerns – or potential conflicts – around the world.

We once were asked by a colleague in the industry what our investment strategy was “if Putin nukes the United States”. Ummm… Simply put, there is none! Why? Because if Putin nukes the United States, we do not think your investment portfolio is going to matter much. Global thermonuclear war is the end game for publicly traded markets (and for anyone living in a populated area!).

But more than “unplannable”, it is also massively unlikely. In fact, armed conflict in the world is at one of the lowest levels we have seen in a long, long time. The technology that has brought countries closer in trade and immigration has also limited the amount of conflict the world sees. 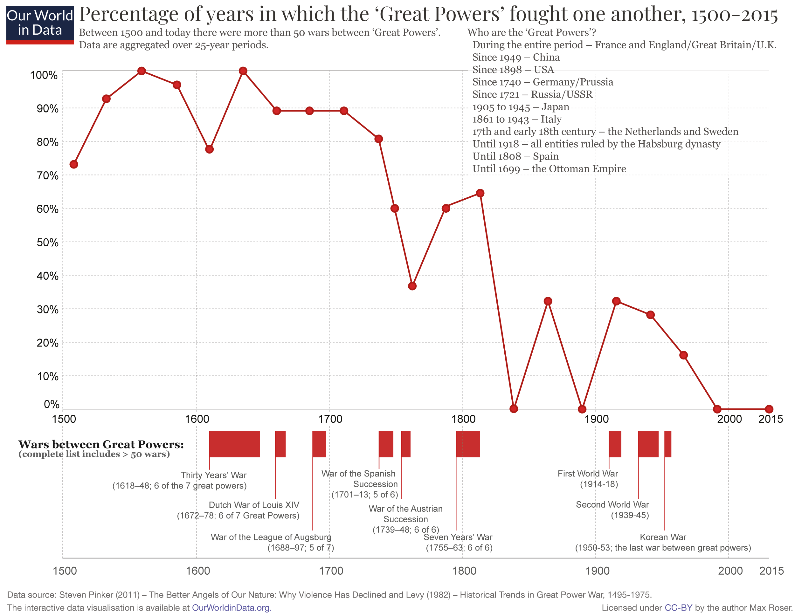 Does that mean the worst can’t happen? It does not. It does mean, however, that having our antenna set to “fear” at all times is not a rational choice.

“Not So Great” Britain

So, countries outside of the United States make up two-thirds of the world economy. And one-third of the U.S. stock market is tied to foreign economies. An armed conflict is not the driver for the world economy. If those things are true, then we need to focus on what is happening to economic policy outside of the United States since it has an enormous impact at home.

This week we are going to focus on what is happening in Great Britain. The value of their currency is cratering. Everyone knows that by now. But why? And what impacts will that have here at home? 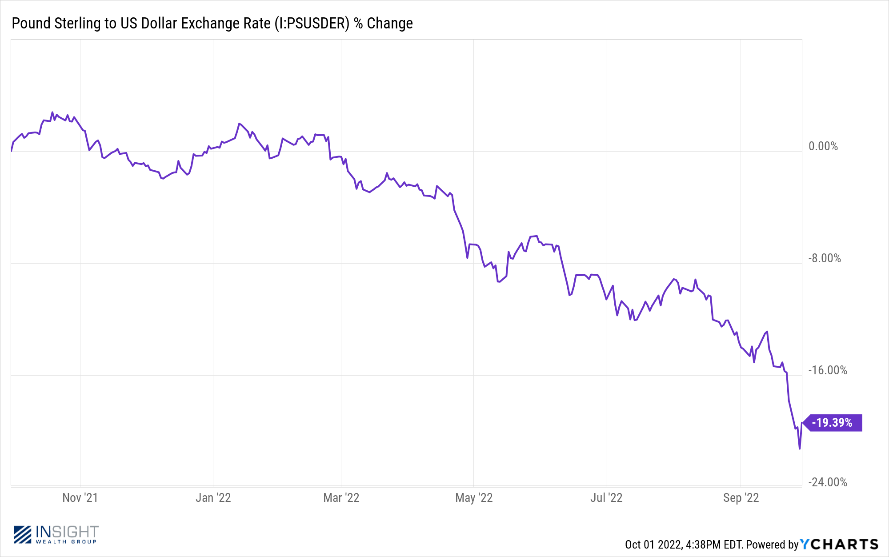 First, it is important to put the past few years in context. Britain has been through a (somewhat self-imposed) meat grinder. It started with Brexit. While Brexit will likely be shown to be an ill-advised policy decision, it would not have been disastrous if, just a few years later, we had not had a worldwide pandemic.

The result has been inflation that has been higher, and more resilient than we have seen either here or throughout the rest of Europe. 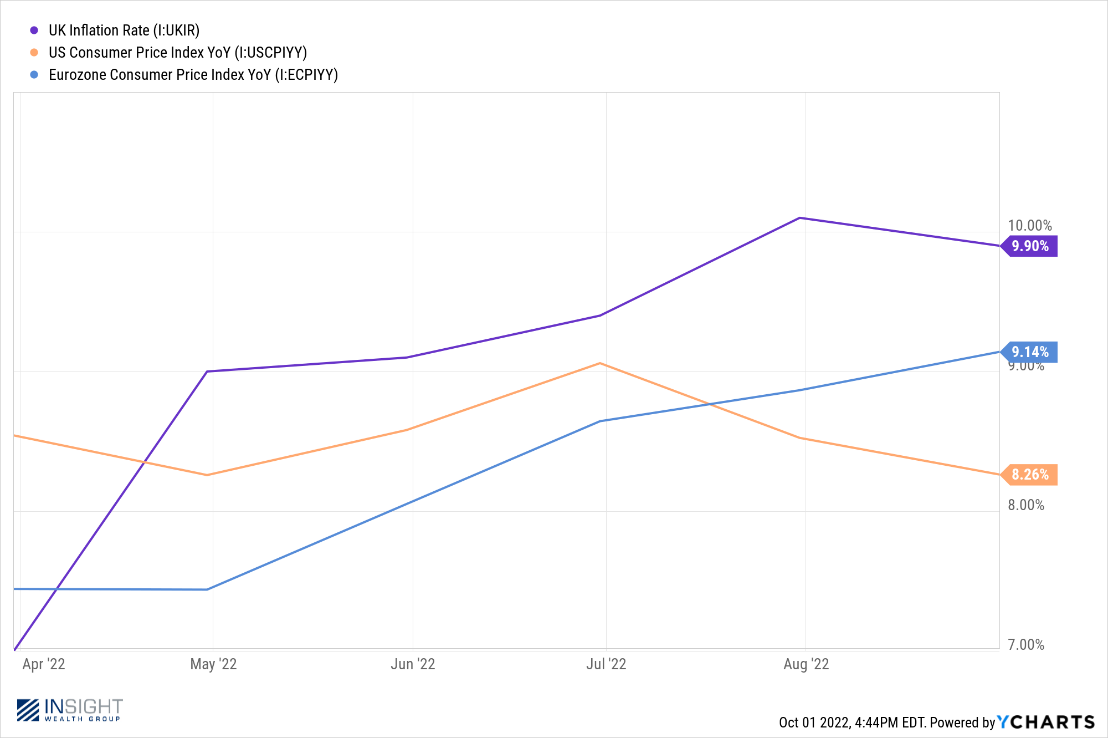 The Bank of England (their version of the Federal Reserve) got the jump on us in raising interest rates by starting in January. But the velocity of their rate hikes has been significantly more conservative and now U.S. rates are one hundred basis points higher than the U.K. 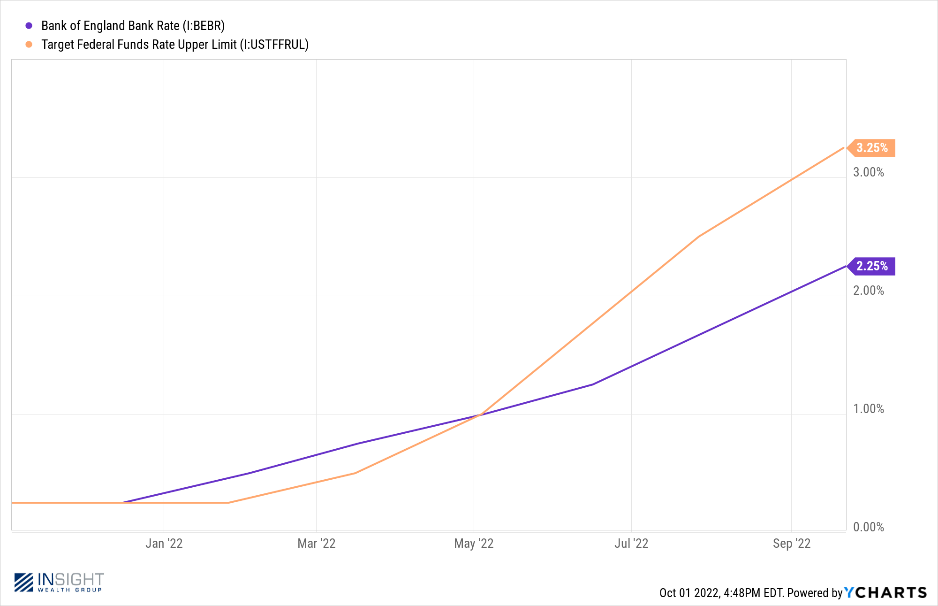 That alone could explain the issue. And one could argue that, much like the U.S., a long view on inflation and interest rate policy would eventually work them out of the situation. Then came the politics.

Last week, the new government constructed by new Prime Minister Liz Truss announced a generationally large tax cut. Now, please do not misinterpret what we are about to say because we always love lower taxes! But cutting taxes – in a significant way – during historically high inflation? We frankly do not get it.

The goal of most tax cuts is to spur spending and investment in the economy. Spending in the economy is exactly the problem around the world right now. While no one wants to crater the economy, slowing it down gradually would be a good thing. Supercharging it? Not so much.

The decision led to alarm around the world and warnings that inflation would continue to run rampant in the United Kingdom. The result was the plummet in the pound sterling we saw last week. And here is where we get to the real tail chasing: In response to the flagging currency, the Bank of England announced they would start buying bonds again – a swift reversal of policy. While it stabilized the currency in the short-term, this is yet another inflationary policy.

So, what does this mean for us? All this drama in England pushed fear back into international markets this week. There is no question the U.S. stock market – and those around the world – suffered for these political and policy decisions. Whether we like it or not, we live in an interconnected world. Let’s hope the Brits can get their act together.

Editors note: It was announced Monday morning (10/3/2022) the Truss government would be eliminating the most controversial part of their tax plan – the cut to the top tax bracket. While that may placate the voters, it doesn’t solve the problem.