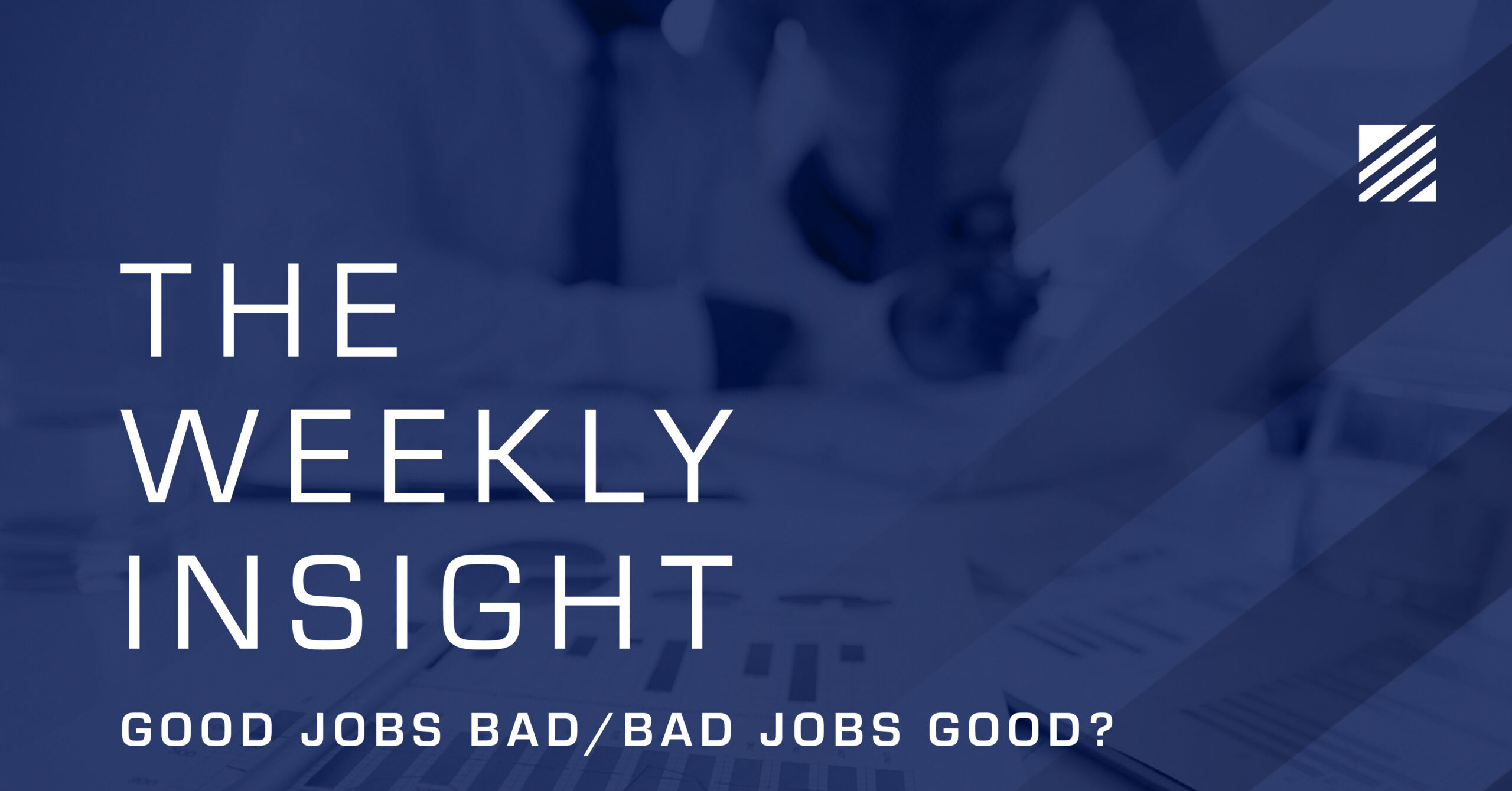 A client called our office on Friday with a great question about last week’s jobs report. We’ll quote them directly:

“So, help me understand this. A good jobs report is a bad thing, but a bad jobs report would be a good thing?”

That is the world we are in right now. It reminds us a bit of living in “The Upside Down” in the popular show “Stranger Things”. Or as the great philosopher Dr. Peter Venkman once said in Ghostbusters: “Dogs and cats living together! Mass hysteria!”.

But what did the jobs report say last week? And what else drove yet another volatile week in the markets? And was it as bad as it may have felt on Friday? Let’s take a look.

Breaking Down the Jobs Report

First, before we get into the data, let’s refresh on the message the market was hoping to get from the jobs report.

In any normal scenario, an economy creating more jobs – with lower unemployment – would be seen as a very good thing. But as we all know, this is not a normal scenario. Instead, what the market is looking for is a slowdown in the labor market. Why? A slowdown would show that the Fed’s aggressive interest rate policy was working, and the likelihood of future aggressive rate increases would be lessened.

Let’s look at what the report said through that lens. First, we added more jobs than expected. The consensus expectation was we would add 250,000 jobs in September. We added 263,000. On top of that, the unemployment rate fell back to 3.5% from 3.7% in August, matching the lowest unemployment rate ever recorded. If you are looking for a soft labor market, that was not good news.

But a deeper dive in the data shows some promising news. First, the rate of hiring is falling. In fact, the 263,000 jobs created in September was the lowest number we have seen since December 2020. It is clear hiring is slowing. 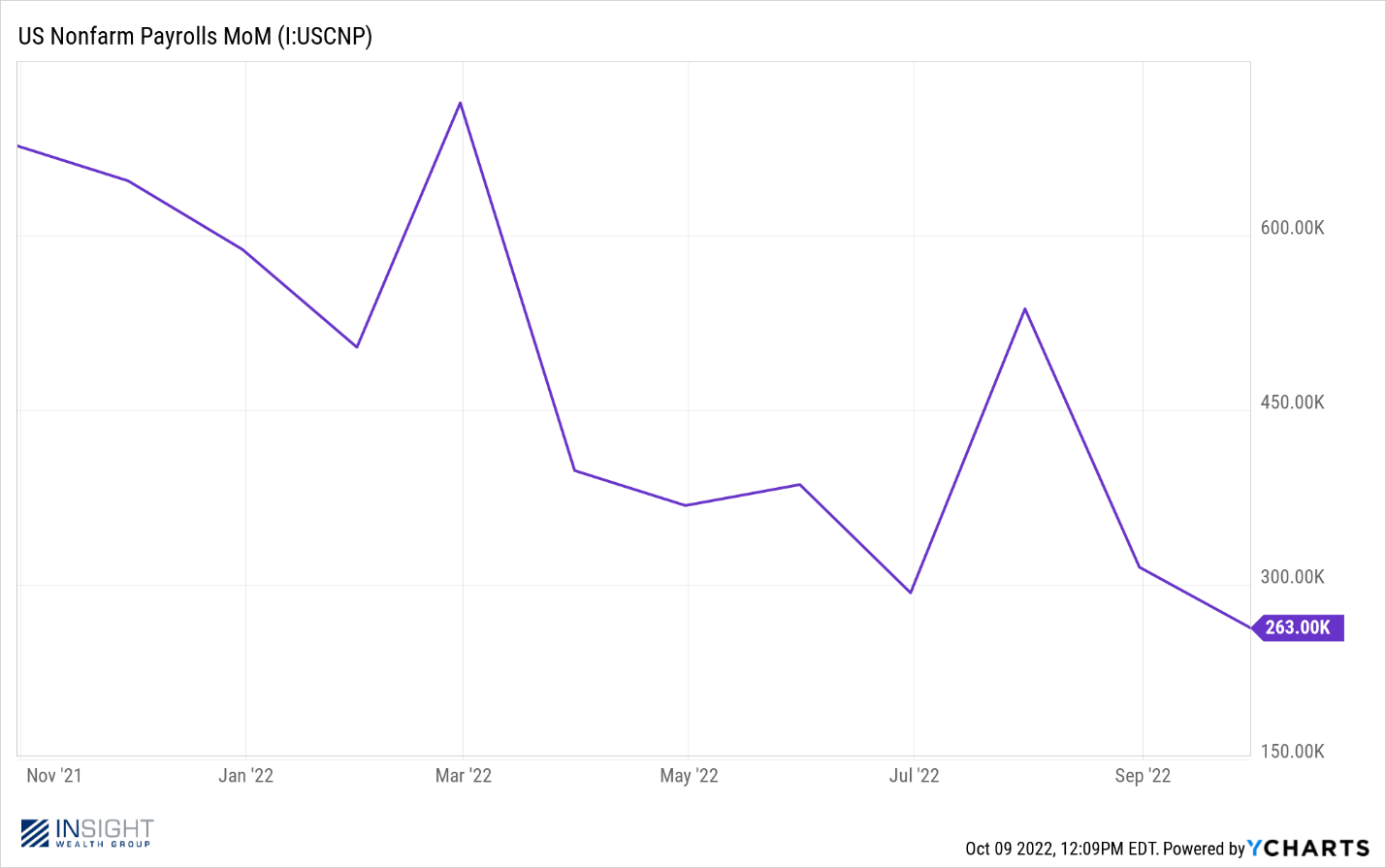 And the number of job openings is slowing as well. It was reported last week that non-farm job openings came currently stand at 10.05 million. That is the lowest number we have seen since June of 2021 and well below the peak at 11.86 million in March. 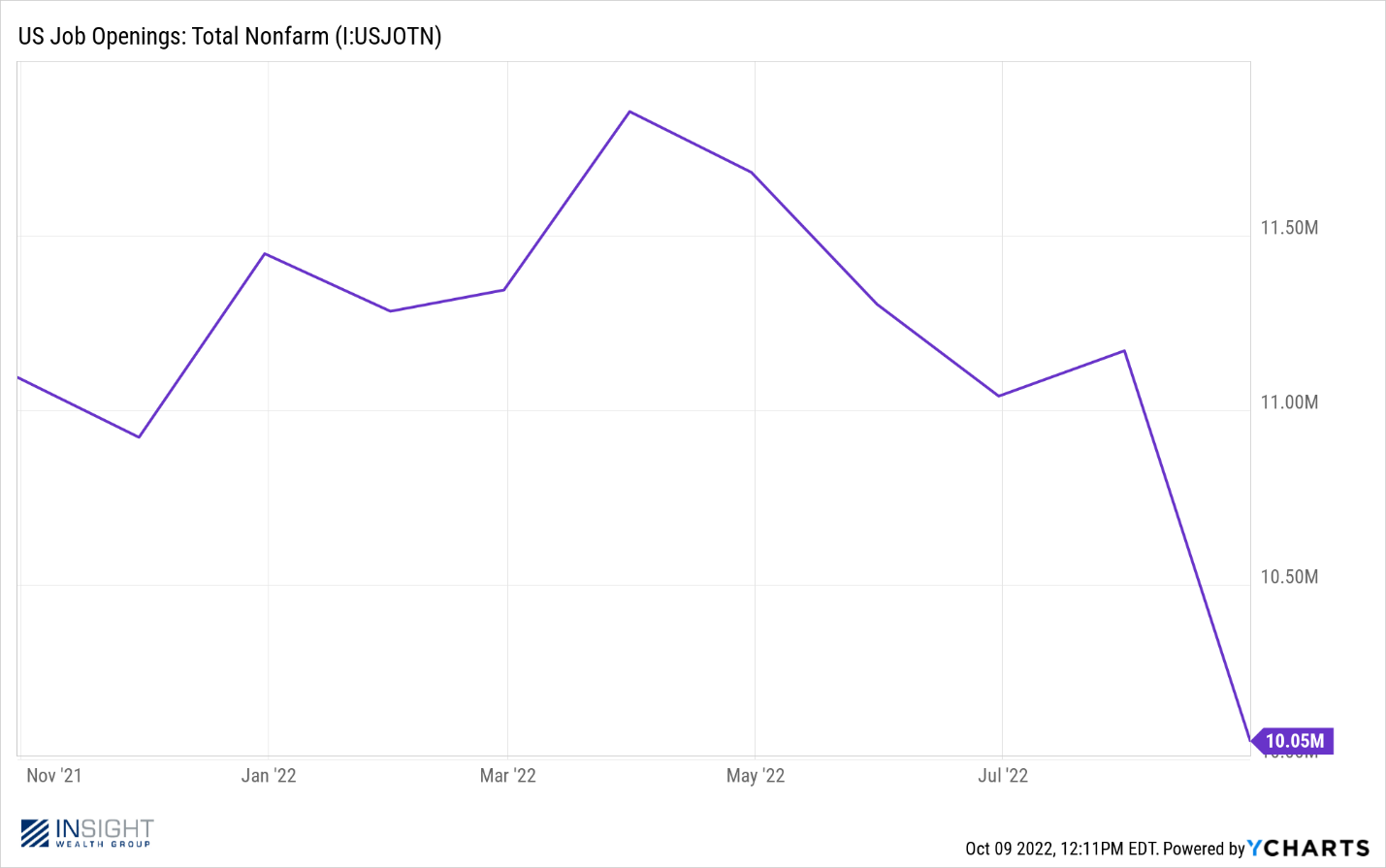 And we also know that wage growth is continuing to slow from its peak in March. That is yet another sign that employers are not chasing after labor as much as they were in this market. 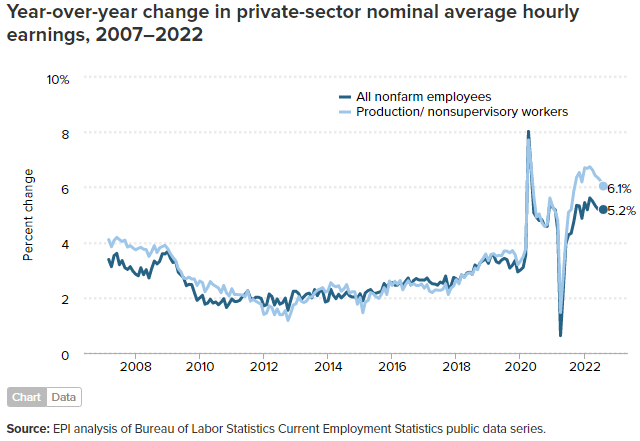 The end result? The labor market is cooling. But it is not cooling at a rate that would give the market confidence the Fed is going to slow their rate increases. And all that really matters to the market right now is the direction of the Fed. An ice-cold labor market would change the messaging. So would a good inflation print. More on that in a minute.

OPEC+ Throws as Wrench in Our Plans

We have talked at length about the difference in Core vs. All-Items CPI – and the Fed’s changing definitions of what matters in their inflation conversation. The new standard is “All-Items”, and we are going to have to act accordingly until we hear differently from Powell & Co.

The good news on that front for the last several months has been that falling energy prices are beginning to weigh on All-Items CPI. Our friends at the oil cartel OPEC+ decided to throw a wrench in that math this week when they announced their intention to cut production in November by 2 million barrels of oil per day.

That caused oil prices to spike significantly over the last week which has also been translated to increased costs at the pump. But even with the $0.12 increase we have seen in a gallon of gas over the last seven days, prices are still 22% below their June highs. And oil prices are still 18% below the highs we saw at the beginning of the Ukraine war. 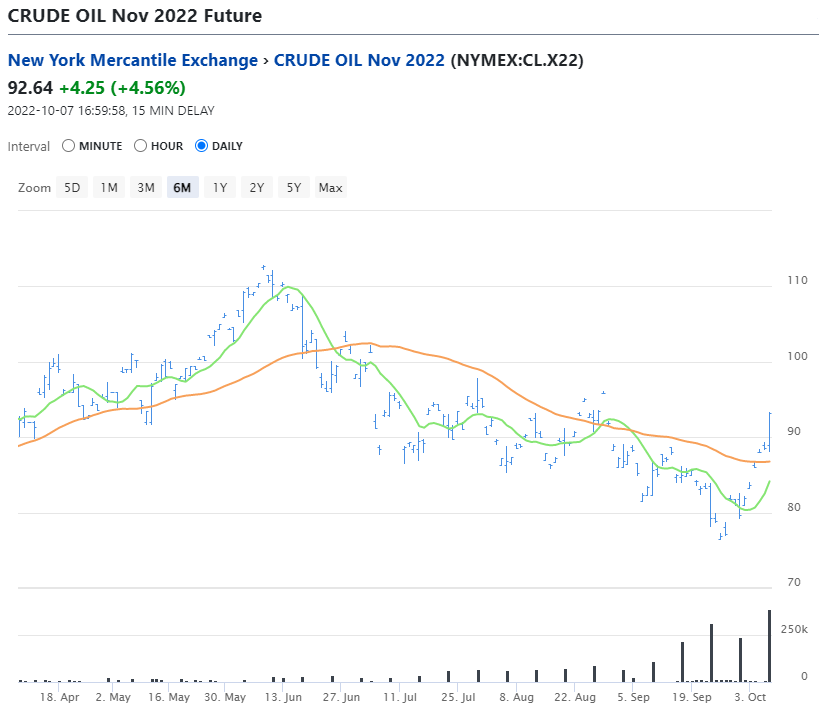 We will not know the true impact of this production cut for a few months. But the good news is U.S. producers continue to drive more production. We now produce one million barrels per day more than we did two years ago and the number continues to climb. A focused effort on incentivizing producers to get oil out of the ground here at home would be wise at this point.

Your author spent a good part of the weekend at the ballpark watching 8-year-olds try to play softball. While the girls are always having fun, the nerves from their parents when they are standing in the on-deck circle are palpable! That is a great parallel for what this week is going to be in the markets.

Despite all the drama we had last week, it was a positive week in the markets. All major U.S. indices were up for the week. But the chart looks like a rollercoaster ride. 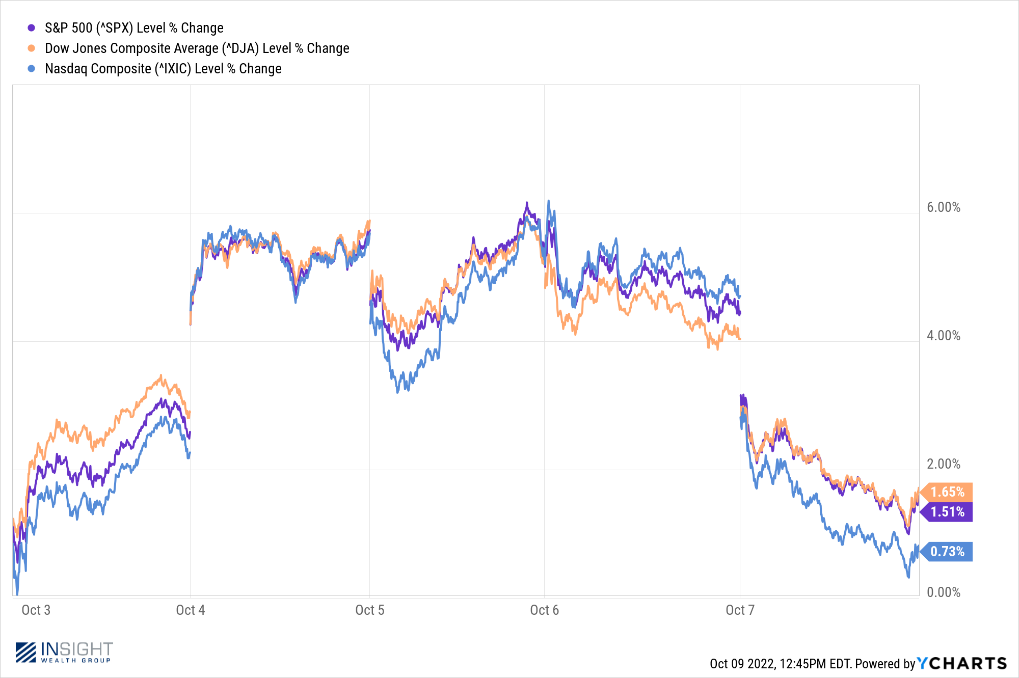 This week will not be much better as everyone focuses on Thursday morning at 8:30AM EDT and the incoming CPI data.

As the story has gone for some time now, a better result will undoubtedly be a boost to the markets. Worse and our volatility ride will continue. We have two CPI prints before the next Fed meeting. Let’s hope we can stack some positive data. We will go through it in detail next week.