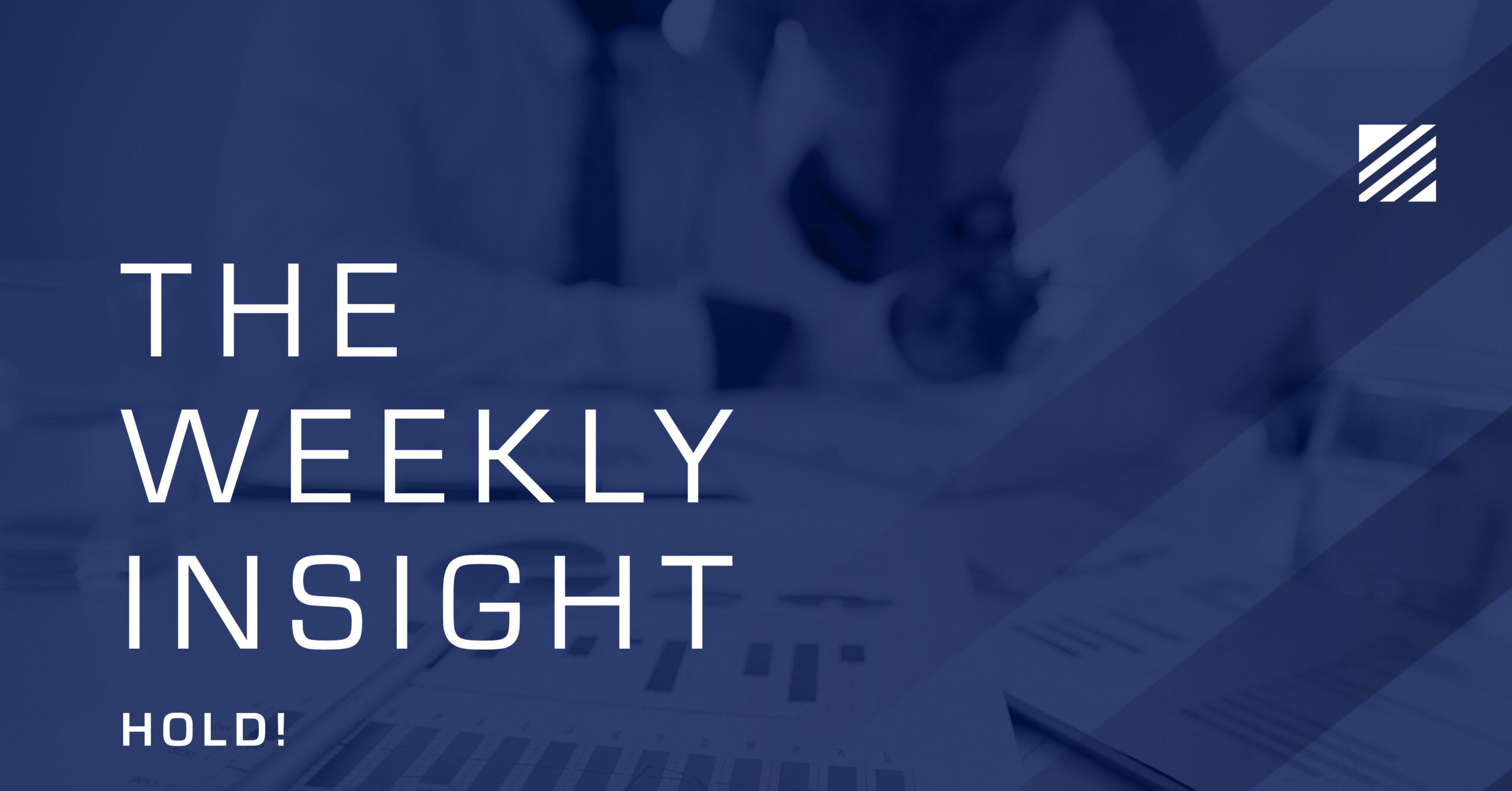 Last week was one of those weeks when it is simply not fun to be in the markets. And which market did not really matter. U.S. equities, foreign equities, U.S. bonds, foreign bonds…all had a bad week. 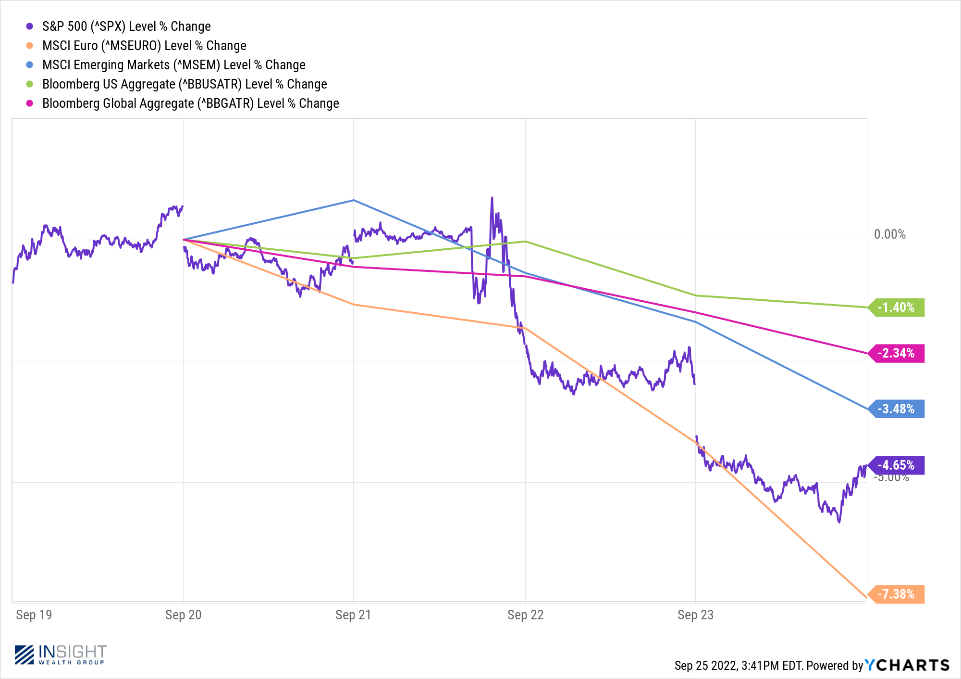 That should not be much of a surprise when you consider we piled quite a bit of rough news into the week. U.S. politics continue to be a mess. The Fed disappointed the markets. And, just for fun, the owner of the world’s largest nuclear arsenal threatened to use them, because he is getting his tail kicked by his seemingly weaker neighbor. When you are in the midst of it, it is hard to see much more than disappointment on the horizon.

But these are, in fact, exactly the moments when measured optimism is the most important. But why, oh why, would we suggest optimism? Because history is on our side. And data is on our side. The short-term is often scary. But the long-term holds reason for hope. We will get into that in a moment. But first let’s look through what the Fed said this week so we can better understand what it means for the short-term.

Our good friends at Taiber Kosmala & Associates described the current situation with the Fed as a “negative feedback loop” last week. We could not agree more. Inflation begets interest rate hikes. Interest rate hikes beget recession. On and on the story goes until something breaks the cycle.

Chairman Powell and the Fed did nothing to break the cycle this week. They raised rates 0.75% which everyone expected. That was not the big news. The big news was they indicated rates were going higher – for longer – than the anyone on Wall Street was expecting. The projection from the Fed is they will raise rates an additional 1.00% – 1.25% by the end of the year. With two meetings left in the year, that means two 0.50% rate bumps at best and a 0.75%/0.50% rate bump at worst. The market was hoping for 0.50%/0.25% to end the year.

More notable than the direction of rate increases was the commentary from Chairman Powell. He was clear that a “policy-induced recession” may be the price to pay to combat inflation. Why? It is the very strength of the economy – or more specifically the strength of the labor market – that Powell & Co. see as continuing the inflationary pressures.

The FOMC released data that indicated unemployment may need to reach 4.5% next year. While 4.5% is – historically – not a bad number, getting us there will not be pain free. Unemployment over the course of the next year would have to increase more than 0.50% from our current levels. According to Renaissance Macro Research, we have never had an increase of that size without a recession. 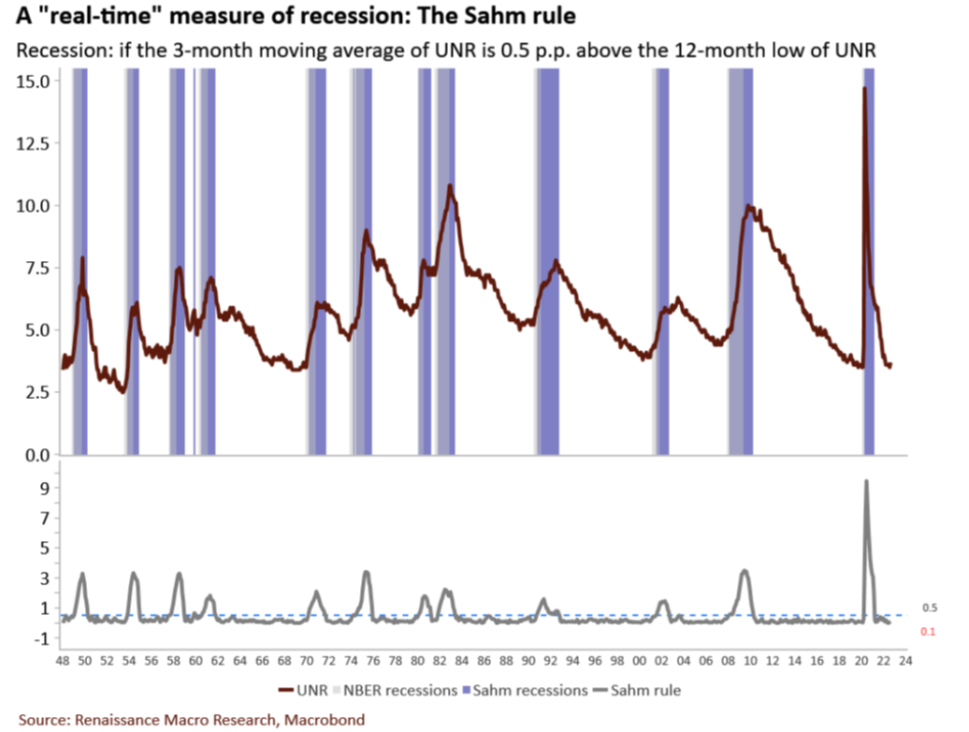 So Where Is the Optimism?

We talked about the “negative feedback loop”. The first way to inject some optimism in this market is to break that cycle. How do we break it? Falling inflation. We have two months until the next Fed meeting. That is two inflation reports to change the tone and change the opinion of the policy makers.

We talked last week about how the peak in CPI almost always corresponds with a turnaround of equity markets. And we also laid out an argument that CPI either peaked in August or will peak in September. We do not know if that will end up being the case, but last week we got the “forecast” data for the September CPI report from Bloomberg. The result? Pretty positive. Month-over-month CPI is expected to drop 0.1% and year-over-year falls from 8.3% to 8.1%. 8.1% would be the lowest number we have seen since February.

So, what does market performance look like after CPI turns the corner? It is quite compelling. 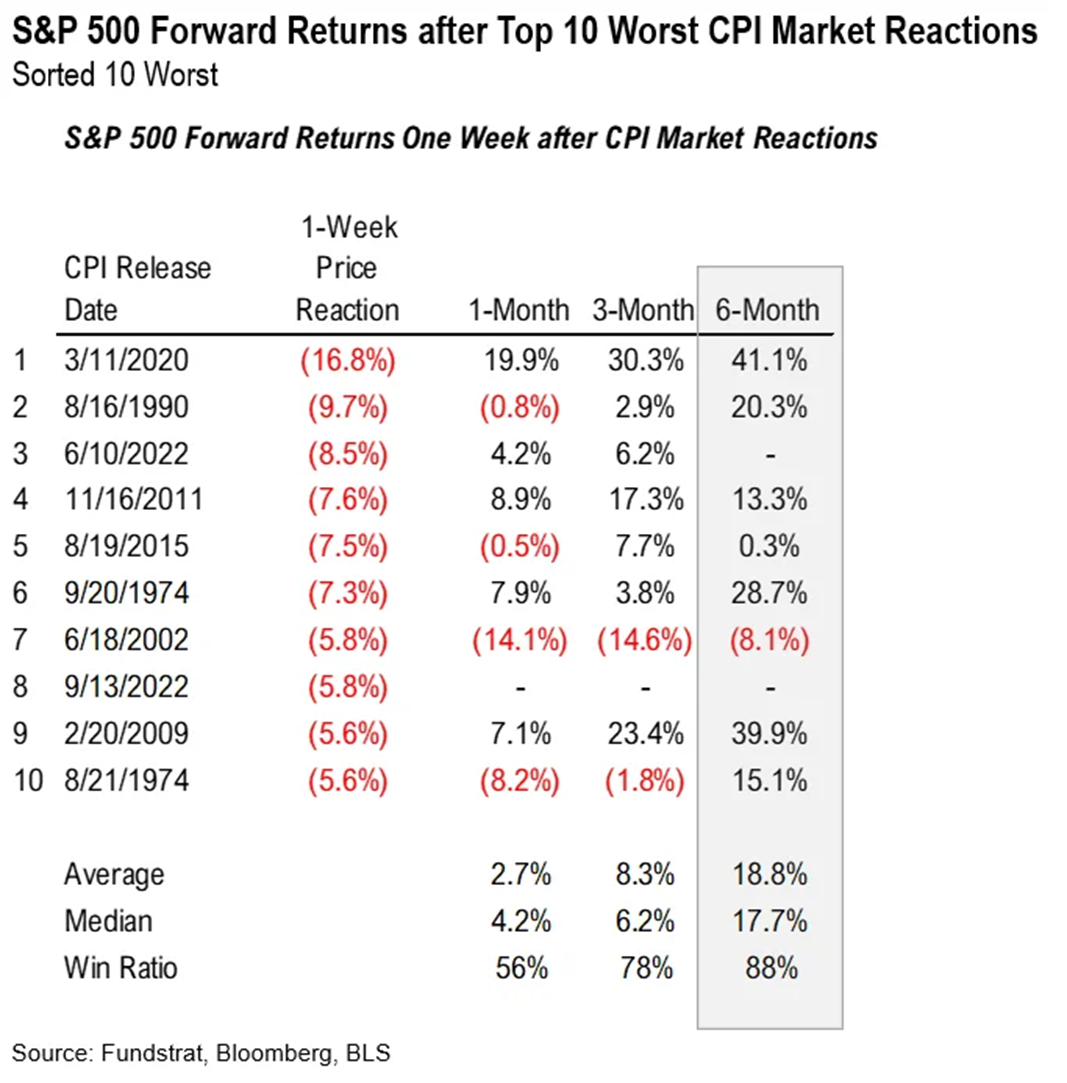 That six-month return figure is particularly compelling when you put it in context with what industry analysts are saying right now. The current average prediction for the performance of the S&P 500 over the next 12-month period is positive 25.7%. That is the bottom-up projection from Friday’s close. The average analyst projection is that 12 months from now the market will close at 4,724.28. Notably, that number has not really moved since July (it has been in a range of 4,720 – 4,750).

When you combine that with the fact that S&P 500 valuations (when you remove the mega-caps like Apple, Google, etc.) are at 13-14x earnings (close to historical recession lows) there is cause for optimism.

We have talked for a long time in these pages about the need to be able to resist our base instincts. Readers have the line memorized by now: Be fearful when others are greedy, and greedy when others are fearful.

We wish there was a magic bell that went off when the market bottoms, but sadly there isn’t.  For those who are confident, this may be a good time to start dollar cost averaging money into the market. But the level of uncertainty remains high. We need some good inflation data before the volatility will abate.

But we can summon our own version of Mel Gibson’s William Wallace in Braveheart. As the British calvary was charging his outnumbered lines, he famously yelled “HOLD!” to his troops. Now is the time to hold. Now is the time to be patient. The time to strike may be coming soon.