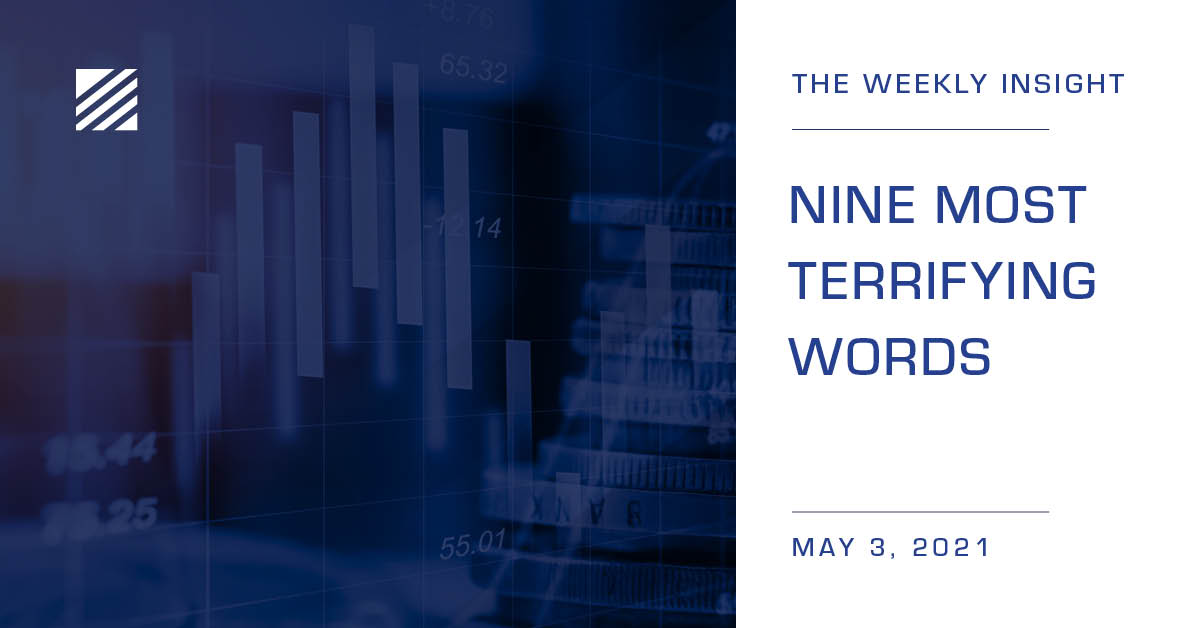 “I’ve always felt the nine most terrifying words in the English language are: I’m from the government, and I’m here to help.”

It is no secret, as business owners, we are passionate about making sure we can pay our bills. It is hard to be in this business for long and not understand that spending more than you make is a dangerous way to go about living. Normally, we worry about that same issue when it comes to government spending.

But 2020 – and the COVID pandemic – has challenged that thinking. In times of major crisis, like the pandemic, large wars, economic collapse, etc., there is no one besides government with a pocketbook deep enough to help assuage the issues that arise. While we may not always like it, government intervention in these times is essential to keeping food on the table and stopping the economy from taking an irreversible decline.

As such, we must admit, the various COVID rescue packages of the last 13 months have done their job. While there are certainly those who have been left behind, the economy as whole was left in a position which was recoverable. And we are seeing that recovery today. GDP growth for 2021 is anticipated to be at 6.5% per the Fed’s latest projection. If that number ends up being true, we will have the highest rate of GDP growth in nearly 40 years. 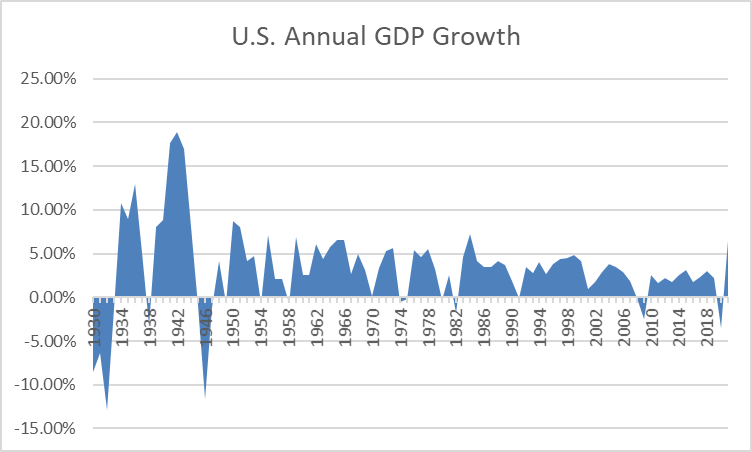 But they are not prepared to stop here.  And we need to take a hard look at the proposals coming out of Washington – especially President Biden’s address to the nation on Wednesday – and understand what they might mean for portfolios and the economy.  The government’s here.  They want to help.  Is that a good thing?

President Biden calls his infrastructure plan “The American Jobs Plan” (AJP).  We think he is largely right to lead with this foot.  There has historically been a strong consensus amongst Democrats and Republicans that infrastructure in this country needs significant work.

As stated on the White House website: “The United States of America is the wealthiest country in the world, yet we rank 13th when it comes to the overall quality of our infrastructure.”  We are certainly not a third world country, but it doesn’t take more than a drive around Iowa to see the needs.  For example, Iowa leads the nation with over 19% of our bridges being deemed by the Federal Highway Administration to be structurally deficient.  That’s over 4,500 bridges that need to be repaired or replaced.

But Biden goes much further than roads and bridges.  He expands the plan to the electric grid, access to high-speed internet, quality housing, clean drinking water, research and development, manufacturing, and education.  He intends this to be a program that attacks climate change and cements the U.S. position as the leading economy for the next generation or more.

Frankly, the scope of the plan is stunning.  Some might call it historic.  And that may be President Biden’s point.  Axios reported on a meeting the President held with historians on March 2nd.  The message out of the meeting was that, while he said, “I’m no FDR.”, he also wants his Administration to be one of the most consequential on record.  He is prepared to take big swings.

The big swings did not stop with the American Jobs Plan.  The President rolled right from that into his American Families Plan in his speech on Wednesday.  This will undoubtedly be the more controversial of the two big swings.

The American Families Plan intends to do several things, including:

This is going to be a tougher one to get through Congress – but we will talk more about that in a minute.

Where’s the Money Coming From?

This is always the big question for us. We all know Washington has been writing checks they can’t cash for a long time now.  After last year’s big spending spree, the Federal debt jumped from just over $21 trillion to nearly $27 trillion.  And the projections for the next decade – not including Biden’s big plans – do not get any better.  The Congressional Budget Office is projecting a debt of $40 trillion by 2031. 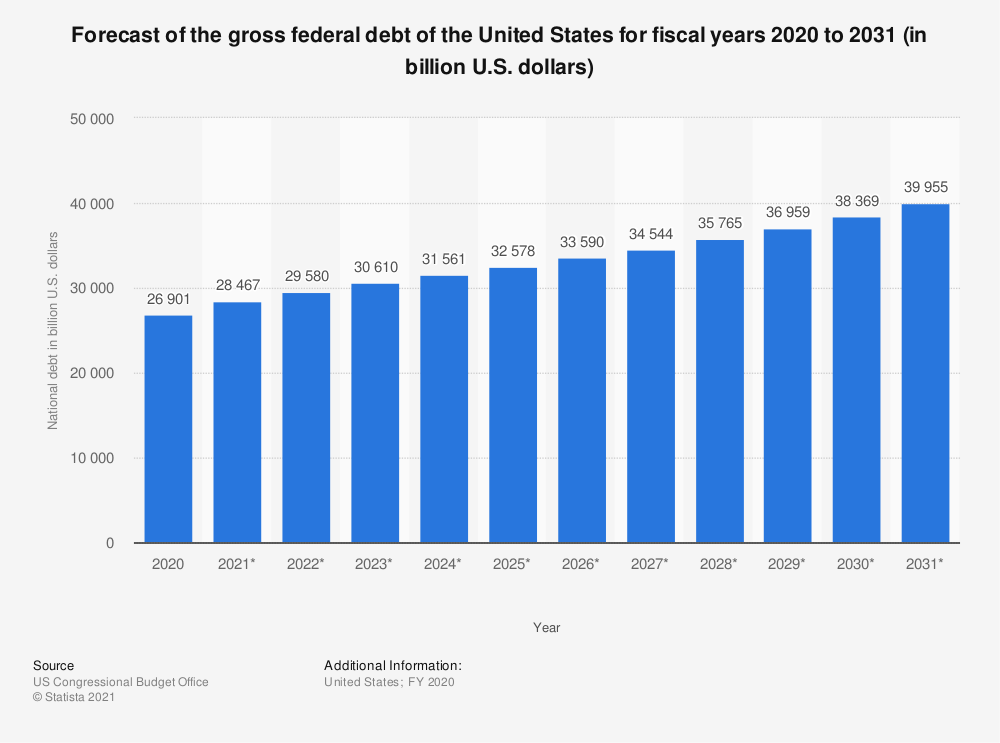 So, if we are being intellectually honest, we have to say we are happy that Biden is at least admitting he is going to have to raise taxes to pay for all of this.  But how does he intend to get there?

The plan is already being described as a “plan to tax the rich”.  Lord knows that sells.  But is that all that’s really there?  Will it really not impact lower- and middle-class taxpayers?  It depends on how you interpret it.

How Likely is this to Happen?

That is the big question.  There is some wiggle room for negotiation on the infrastructure bill.  Republicans have been begging for infrastructure investment for years.  To walk away now, just because it’s coming from a Democrat, is disingenuous.

The American Families Plan?  Much more difficult to pass.  The same goes for the tax hike.  There are not going to be 10 Republican votes for either of these proposals in the Senate – at least not in this environment.  That means the Democrats are going to have to pass this legislation in the reconciliation process and get 100% of the Democrat votes in the Senate to the table.

This brings us back to our oft mentioned Democratic Senator from West Virginia, Joe Manchin.  Senator Manchin is going to hold a lot of sway over these debates.  In fact, just a few weeks ago he made it known that, while he would not support a 28% corporate tax rate, he might go for 25%.  Watch to see if the White House begins to change the messaging here.

We would love to see a bipartisan solution to some of these items, but that is probably not likely at this point.  Democrats from conservative states will be the lynch pins in this process and will determine if it is a reasonable plan with measurable outcomes or just another Washington boondoggle.

In the meantime, we will be watching closely to see if there are any risks or opportunities to your portfolio or tax plan from this debate.  We will certainly be talking about this issue a lot over the next several months and will keep you up to speed.