The Weekly Insight: Memories of the Tech Bubble 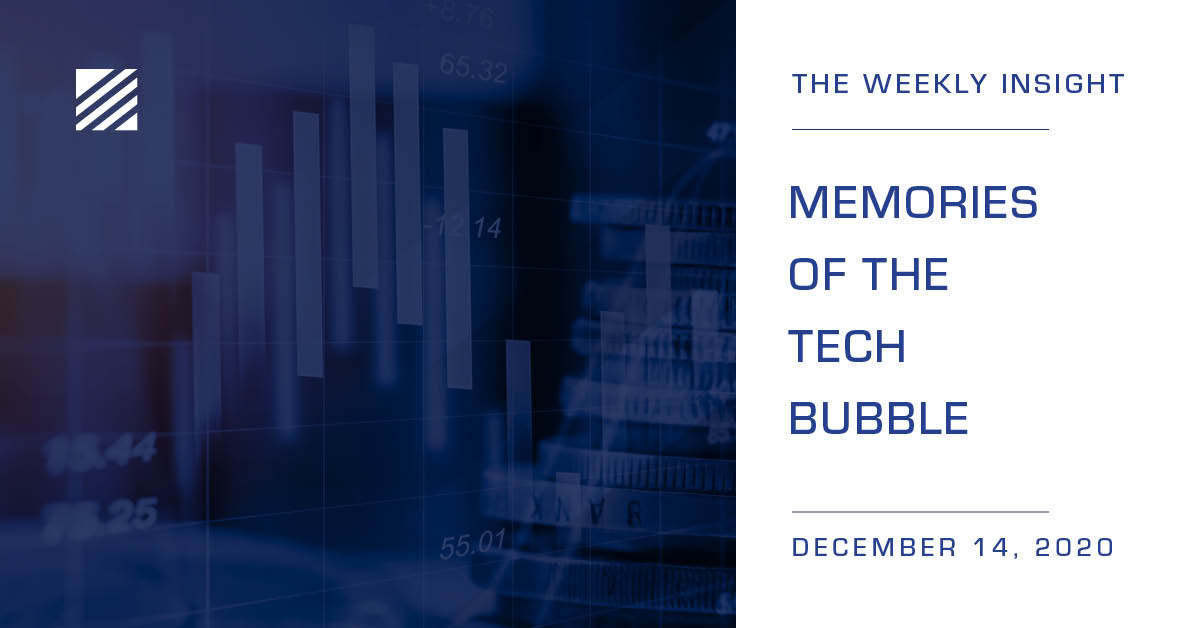 Over the years, we have learned that this industry is very cyclical. Certainly, we mean cyclical in the big picture way of swings in market and economic success. But also cyclical in activity. For example, we always know the month before Tax Day is going to be hectic (especially for our colleagues at Insight CPA!). The same goes for the end of the year as everyone looks at year-end financial planning – which is why it was the topic of our last two memos.

That same type of cyclicality applies to market activity as well. Things were going fast and furious for the last few months. The Election, spikes in COVID cases, vaccine announcements, etc. all created a lot of activity. But as we enter the Holiday Season, as happens many years, the activity level seems to be slowing down. It will undoubtedly spike as we get closer to the end of the year, but there frankly was not much to report on last week.

So, since there were not big moves in portfolios last week – nor in our opinion of those strategies – we are going to take this week to take a stroll through a few fun issues that, while they do not all specifically relate to our models, tie into some questions we hear from our clients.

As you may or may not be aware, Tesla (TSLA) is about to be added to the S&P 500. So, whether or not you own TSLA today (very few of our clients do), nearly every 401k participant or index holder in the country is about to own a piece of the company. So, what does that listing mean for the stock? And where does its valuation sit today?

In fact, this reminds us a lot of a tech bubble stock from the late 1990’s. To be clear, we are not comparing TSLA to the worst of the tech bubble (i.e., eToys.com and its multi-billion valuation which ended in bankruptcy). We would instead compare TSLA to high quality companies that were good companies before the bubble and good companies after the bubble. A great example of this is Cisco (CSCO). Cisco has had continued business success for the last 25+ years. But if you bought CSCO at the peak of the tech bubble, you are still down nearly 45% more than 20 years later. The problem was not the company, it is when it was purchased. 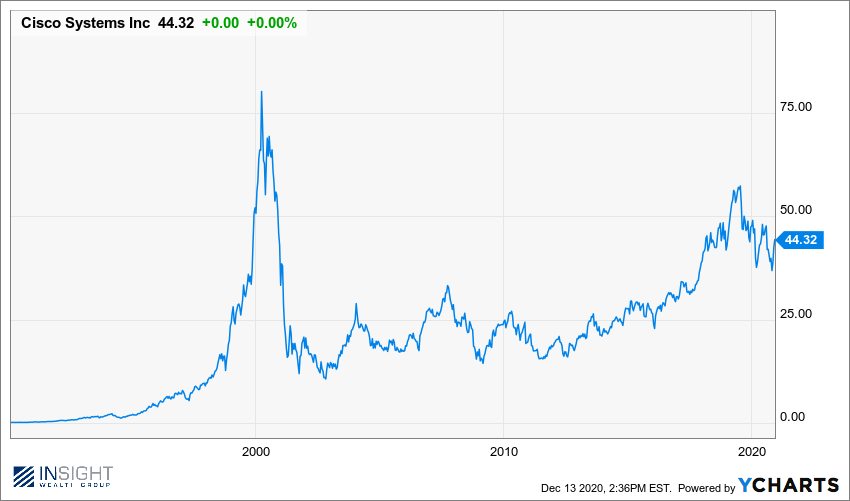 So, what will this mean for TSLA when it joins the S&P 500 on December 21st? It is probably not good news. When TSLA joins the S&P, it will be the 8th largest position in the index, which means index funds are going to have to buy massive amounts of shares to keep their funds in line with the index. That is part of what has driven TSLAs extreme growth this year (+667%). Investors are buying it hoping to sell it to fund managers at a higher price when they do their rebalance next week. But those institutional managers are not going to be driving the share price higher in the coming months and TSLA will become a much more “passive” investment.

As you may recall, while we do have significant exposure to the S&P 500 index, we do it through an “equally weighted” instead of “market cap weighted” fund. That means TSLA will make up 0.20% of our S&P 500 exposure when it hits the index. The stock struggling will not be particularly noticeable in portfolios. But, for those of you who like to watch these things, this should be a very interesting experiment!

So just as we talked about the tech bubble as it relates to TSLA, we are about to tell a story that also harkens back to the crazy days of tech stocks: IPOs. 2020 has been a big year for the IPO market, and this week was particularly notable with the IPOs of DoorDash (DASH) and AirBNB (ABNB). 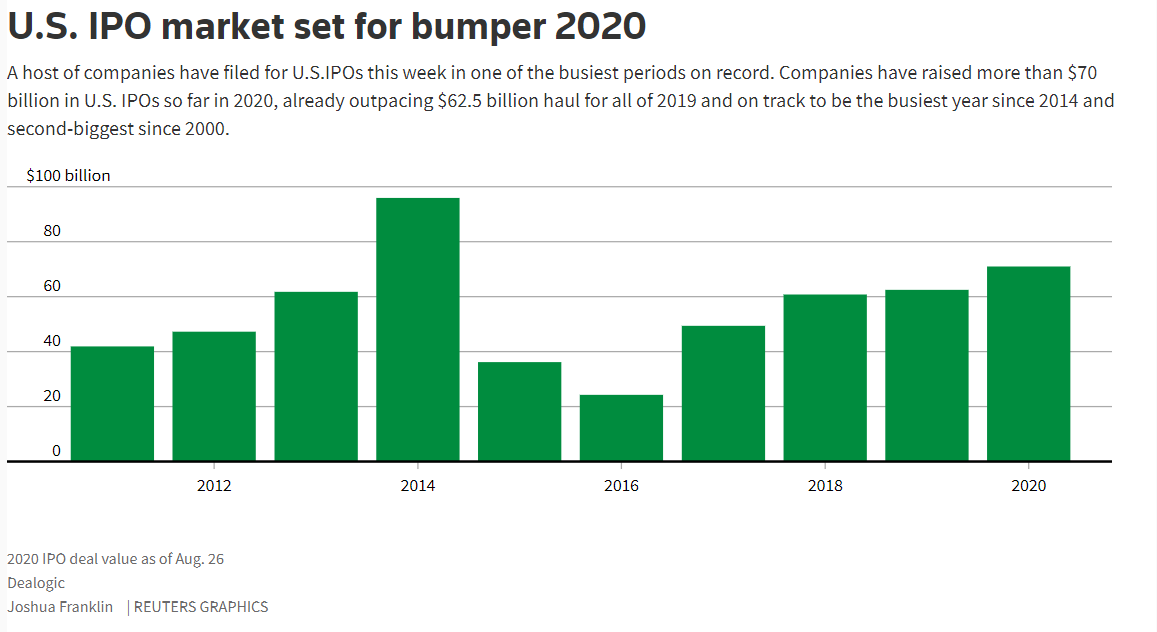 To be clear, these were two very successful IPOs. But maybe they were a bit too successful. DoorDash did make a small profit during the heart of the pandemic ($23MM) but lost $600MM last year. AirBNB has lost $697MM year-to-date. Yet today, a few days after their IPO, the stocks have valuations of $83 billion (ABNB) and $56 billion (DASH) respectively.

If you assume ABNB is a hospitality company and DASH is a food company, let’s look at their competitors:

Again, we would argue the problem is not the quality of the companies. Unlike eToys.com, we do not question whether or not ABNB or DASH will be around in 20 years. In fact, the pandemic helped make a stronger case for the two companies and was undoubtedly one of the reasons they decided to roll these out this year.

The problem, however, is that these IPOs make the venture capitalists a lot of money – but typically are not good for the average investor who buys on IPO day. The old example of Facebook rings true here. While the price for FB is up nearly 9x since its IPO, an investor who bought the stock on the day of the IPO had to wait 15 months for the stock to get back to its IPO price. Those who waited to pick it up – after things had settled down – are up more than 16x on their investment. We are not saying ABNB or DASH are the next Facebook – they likely are not. But there is a reason we do not mess around with many IPOs at Insight. You are paying the maximum possible price for an unknown upside.

We have made this the point in the last few memos so we will not bludgeon you with it again – but please remember we are running out of time to look at any year-end planning issues you may have. Our friends at TD Ameritrade typically say any request made after December 15th (tomorrow) is “best efforts”, meaning they hope they can get it done, but will not make any promises. We have never had any problems clearing that hurdle – but the sooner we can get on these topics, the better for all involved. So, if you have any issues you want to talk through, please let us know ASAP!

We hope you are having a wonderful holiday season. We look forward to closing out 2020 strongly with you!