The Weekly Insight: The Truth About Retirement 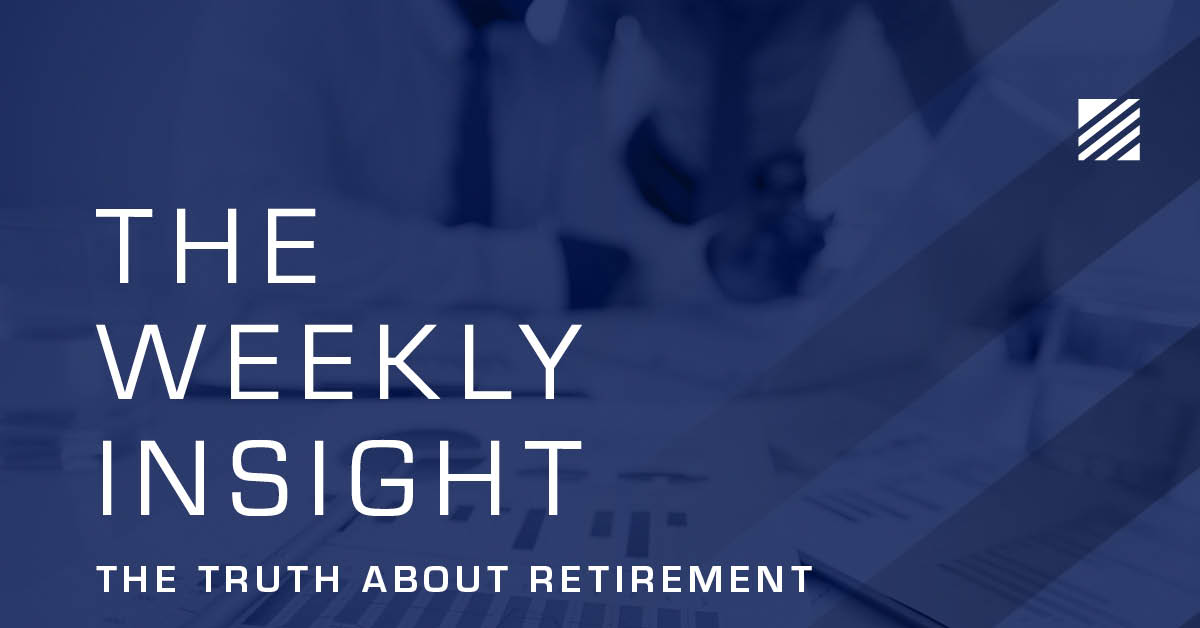 The Weekly Insight Podcast – The Truth About Retirement

If you have followed our commentary for some time, you know we take a very macro view of the world. Yes, the day-to-day movements of the stock market are important, and must be analyzed and understood. But no one can consistently find advantages in the margins.

Instead, we take a view that understanding what moves people, governments, and the economy will lead to the movement of markets. This game is both science and art.

That’s why we spend so much time talking about investor psychology, government policy, and macroeconomic themes. They matter. In fact, we would argue they matter much, much more than the latest stock tip you hear from the Jim Cramers of the world. If we can’t understand the why, we’ll never be able to deliver performance.

Last week we complained about the financial doomsayers that make up a good portion of the financial media “intelligentsia.”  Maybe we’re getting a little old and crotchety, but we’re back to complain a little more this week – but this time about our elected officials. But the point today isn’t just to whine – but to also give you some valuable information for your long-term financial planning.

The State of Retirement Savings

The view of retirement in this country has shifted dramatically over the years. Frankly, one hundred years ago, no one retired! They were either physically unable to work, or they simply died. That was why, when Social Security was created in 1935, it was considered “old age insurance”, not a retirement plan.

And my how the demographics have changed since then. Let’s remember that when Social Security went into effect, the benefit age was 65 meaning that someone born in 1870 would have been eligible for benefits in the first year. What was the average life expectancy of someone born in 1870? 39.41 years! In fact, a study we found (Milbank Memorial Fund Quarterly, Vol. 42, No3, Part 1) stated that only 36.96% of the population born in 1870 was alive by 1935.

That math doesn’t work today. Life expectancy has exploded in the U.S. as advances in healthcare and quality of life have impacted everyday Americans. But while Americans are living significantly longer, our leaders have never had the courage to be honest with the American people. They’ve been so bold to raise the “retirement age” (notice it’s now shifted to being called a “retirement” program, not old age insurance!) from 65 to…67. 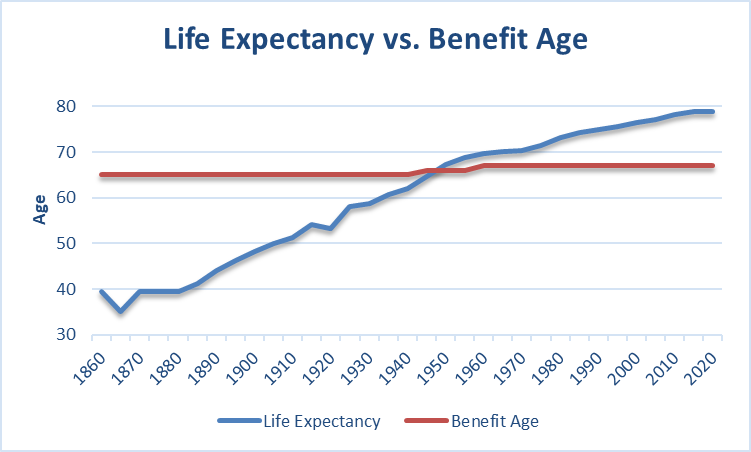 We all know the result. The Social Security program is failing financially. By 2034, it will have burned up all excess reserves. Without changes, benefits will shrink. (Current calculations say benefits to all participants will be cut 22% in the first year).

But that’s not the only problem. At the same time this is happening, Americans’ expectations about retirement are changing. A recent survey from Natixis Investment Managers found that the average American hopes to stop working at age 62. But there is a substantial difference amongst generations. The average Baby Boomer indicated they intended to work to age 68. Gen X’ers? 60.  Those in Gen Y are really optimistic and intend to stop working at 59.

In the end it all becomes a math problem. A member of Gen Y born in 1990 has a life expectancy of 74.89 years. That means, if they started working at age 20, they intend to work for 39 years and be retired for nearly 26 years. Without substantive savings in excess of Social Security (which may not be there for them!), that is just not going to be possible.

Which brings us to our gripe today. The U.S. House passed legislation recently that would (if it became law) dramatically change how retirement savings works. It’s not law yet, so we won’t get into the nitty gritty. But something noticeable is happening.

But first let’s understand the history. Back in 1978 when Section 401(k) of the Internal Revenue Code was created, it was almost an accident. Congress wasn’t intending to create what it had – but employers realized the opportunity and started offering tax deferred savings to employees (the first to do so was Hughes Aircraft). But once the world realized the possibilities, Congress formalized the rule and created what was, at the time, the third leg of the retirement stool: Social Security, Pensions, and now 401(k) plans.

Today the pension leg has nearly evaporated. In 1970, 45% of U.S. workers had a pension. Today that number is only 16% – and nearly all those workers are government employees. Why would an employer pay the costs associated with a pension when they can offer a 401(k) instead? That leaves us with a two-legged stool (not very safe!) and one of the legs is cracking.

If we had real leaders in Washington, they would be having an honest conversation with the American people. They would make sure workers understood their expectations for retirement and the reality are not aligned. Social Security must change, but so must workers individual savings.

But instead of doing the hard thing, the House last week decided to do the easy thing: they are passing off more responsibility for retirement savings to business owners and workers and claiming it’s a wonderful new benefit. The bill would require employers to have a retirement program, require them to enroll employees immediately in the plan, and provide a benefit at a rate of 3% of salary.

None of this is law yet. Based off the data above, it’s great news that there is a system in the works which will essentially force employers and employees to better secure their retirement future.  And don’t get us wrong: we’ll certainly work with our clients to take advantage of it.

But it’s easier to hand this off to employers than it is to be honest with the workers in this country. Their expectations for retirement are unrealistic and the system they expect to provide for them is failing. And the politicians know they’ll be dead and gone (the average age of the U.S. Senate is 64.3 years!) before the bill comes due. Shame on them.

The holiday shortened trading week (reminder: markets are closed on Good Friday!) is set to deliver a good bit of drama. First, we start the week with our first big round of earnings: the big banks. JP Morgan Chase, BlackRock, Citigroup, Wells Fargo, Morgan Stanley, and Goldman Sachs all report their Q1 earnings this week. And their earnings aren’t expected to be stellar.

With rising interest rates, banks are expected to price in more “loan losses” for bad debt. One of the things we know is that when banks post more loan losses, they also struggle to excel at earnings. Look at this chart from FactSet: 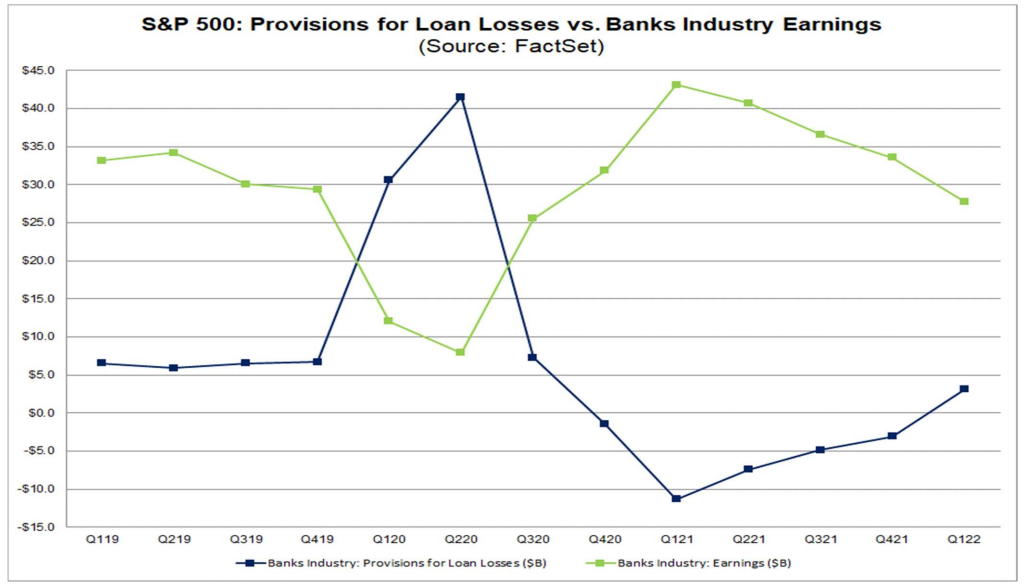 But the expectations for rising loan losses are not extraordinary. And overall, we anticipate the S&P 500 beating earnings expectations this quarter. In fact, the market typically beats expectations every quarter. It has only underperformed expectations once in the last four years (Q1 2020) and that quarter shouldn’t surprise us much. 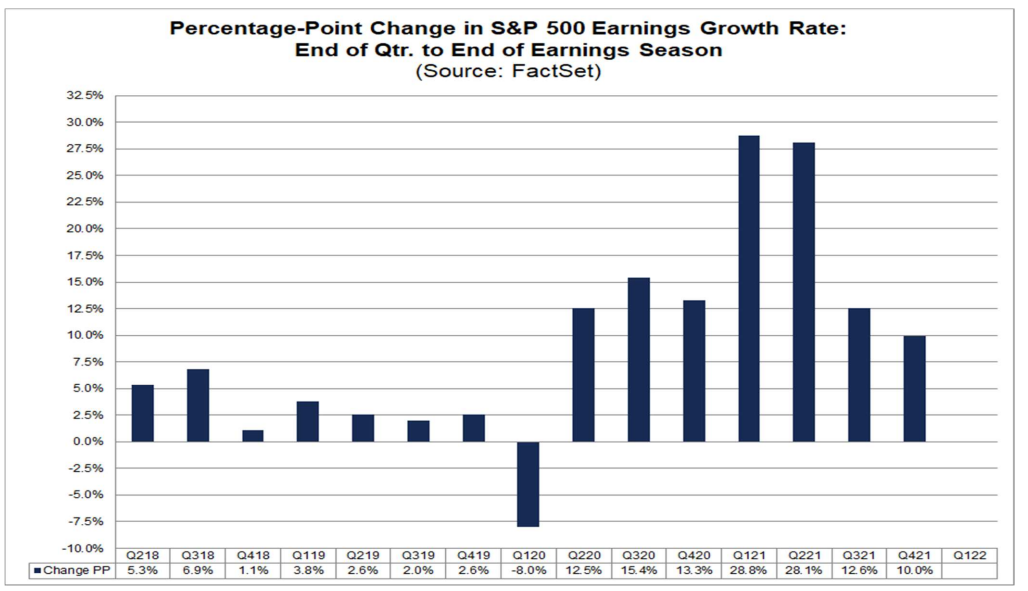 The other big piece of news coming out this week is the CPI PPI data for March. We’ve beaten the inflation story to death, so we won’t go through the whole thing again. Right now, just know that economists are predicting yet another bad month-over-month change in inflation. CPI is expected to rise 0.50% from February and PPI is expected to rise 1.10%. Anything above those expectations and the market will undoubtedly react poorly.

We would just remind you that not all is lost. We spent some time last week looking at the Cass Freight Index and what it might mean for inflation. We don’t have a new data set from them, but thought this was interesting:

Since March 8th, the volume of freight being shipped in this country has dropped nearly 15%. That coincides interestingly with this chart: 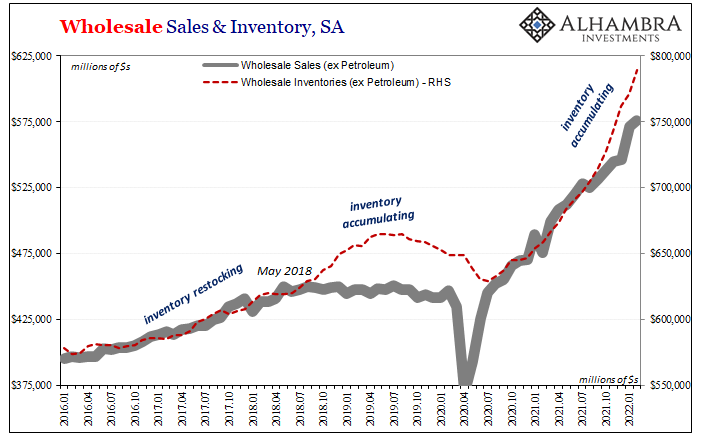 Businesses are catching up to the demand that was created over the last few years due to COVID. Inventories are rising, freight shipments are dropping. The traffic jam that COVID created in our economy is starting to let up. That’s not to say inflation is going to go away quickly, but the conditions are improving. If any of this data changes the Fed’s expectations in the coming weeks and months, expect the market to react positively.

We’ll leave it there for this week. As always, please let us know if you have any questions. And have a wonderful week!