The Weekly Insight: Life, Liberty & the Pursuit of Happiness 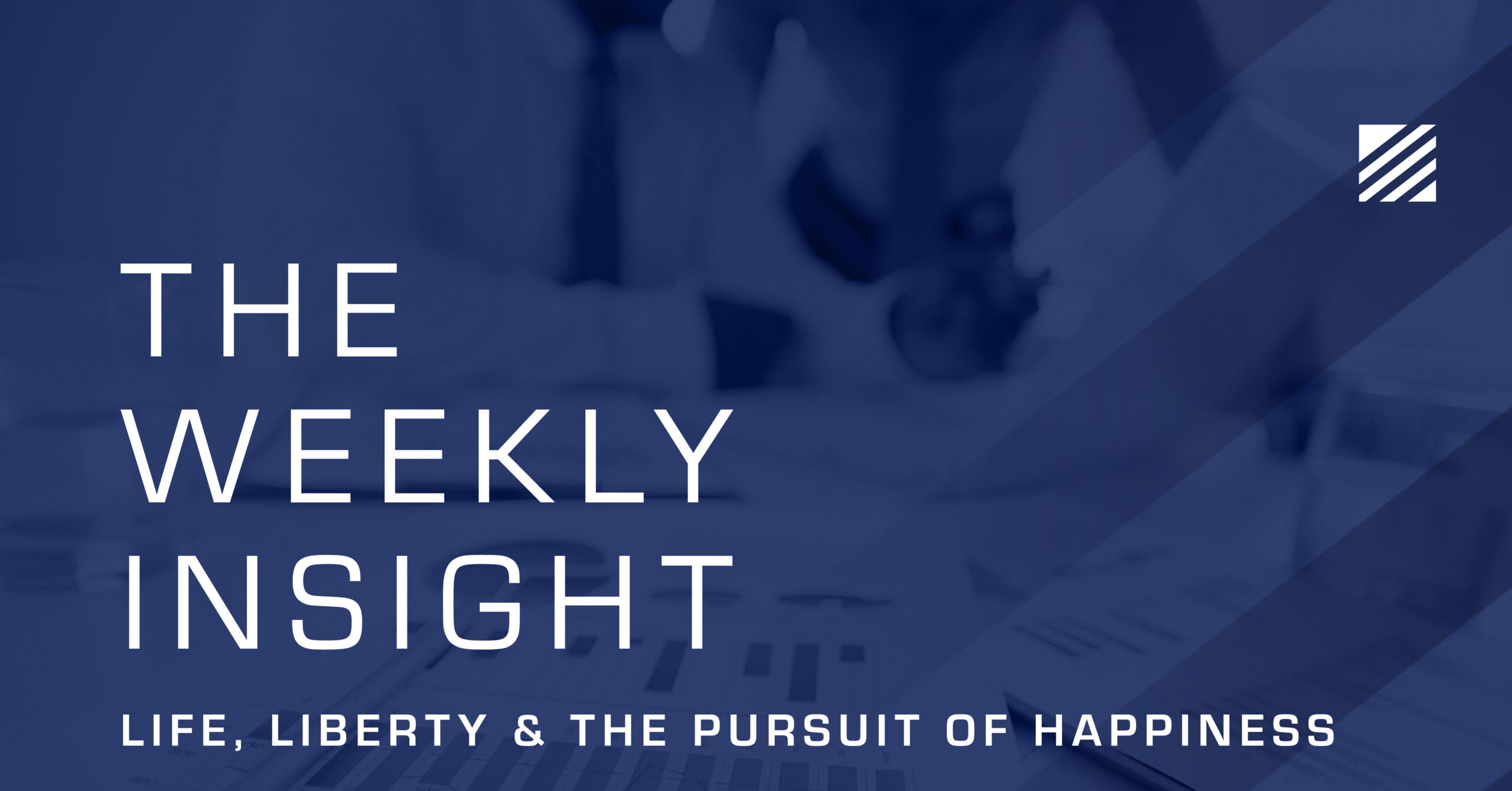 The Weekly Insight Podcast – Life, Liberty & the Pursuit of Happiness

Happy (belated) Fourth of July! We hope the extended weekend allowed you some time to relax with family and enjoy – what we believe is –the most important secular holiday of them all. The words that fifty-six men penned 246 years ago were so bold they literally changed the course of the world.

As we sit here two and a half centuries later, it’s hard to feel connected to that stunning bravery. Seeing people “mutually pledge to each other our Lives, our Fortunes, and our sacred Honor” seems a far reach from members of Congress tweeting about the latest manufactured insult or crisis. Our nation seems aflame right now. Inflation, Congressional hearings about insurrection, controversial Supreme Court decisions. You name it and people feel down about it. In fact, in an AP-NORC poll released this week, 85% of U.S. adults said the country was on the “wrong track”. At least that’s something we can agree upon: both 78% of Democrats and 92% of Republicans think we’re headed in the wrong direction!

Long-time readers of this column know we’re not here to make political points. While we certainly have opinions about the issues of the day, we’re agnostic about them when it comes to our job for our clients: managing money. But how people feel about these issues – their sentiment – is important. It impacts the choices they make with their money, which in turn can impact your portfolio performance. Which is one of the things that’s so frustrating right now, because sentiment and facts have diverged to a level, we’re not sure we’ve ever seen.

Why? Today – the very day you’re reading this – is quite simply the most prosperous, safe, and healthy time to be alive in human history! Seems a bit different than the news you hear today, right? Well, let’s look at some data.

We’ve talked before about the evolution of man over the millennia. We’ve certainly come a long way from our days of living in caves and running from packs of wild animals. But there’s been a stunning change – in just the last 250 years – in how we live.

When the Declaration of Independence was written, the global average for life expectancy was slightly below 30 years of age. That means fully half of the population died before age 30! Today? World life expectancy is over 70 years! And that’s not just because of massive changes in rich countries. Even on the continent of Africa, life expectancy is now nearly 65 years. 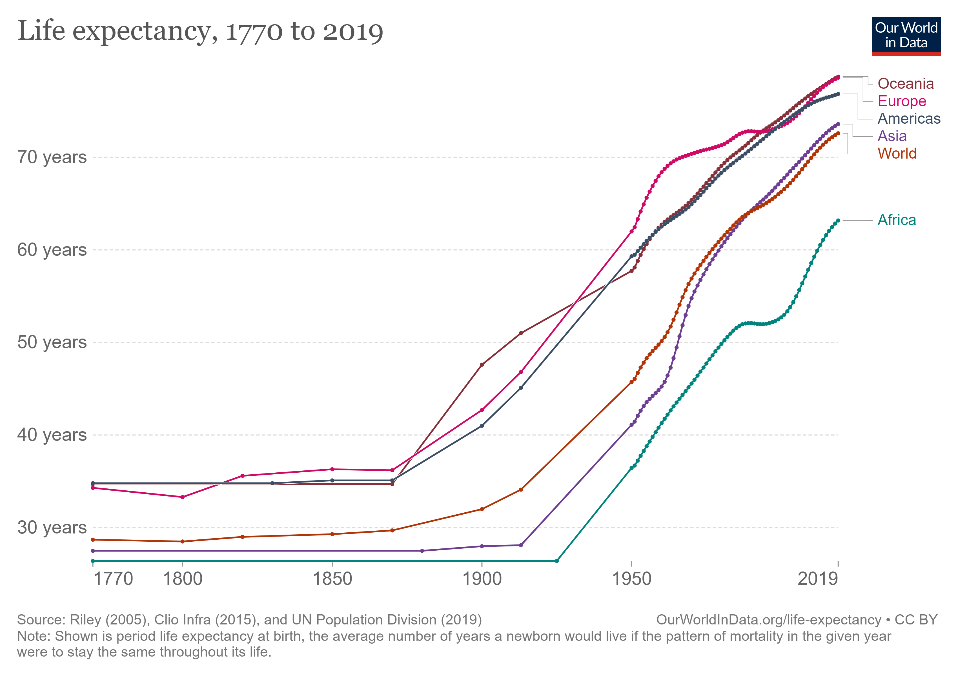 And it’s not just age. The worldwide economy has exploded since America was founded. 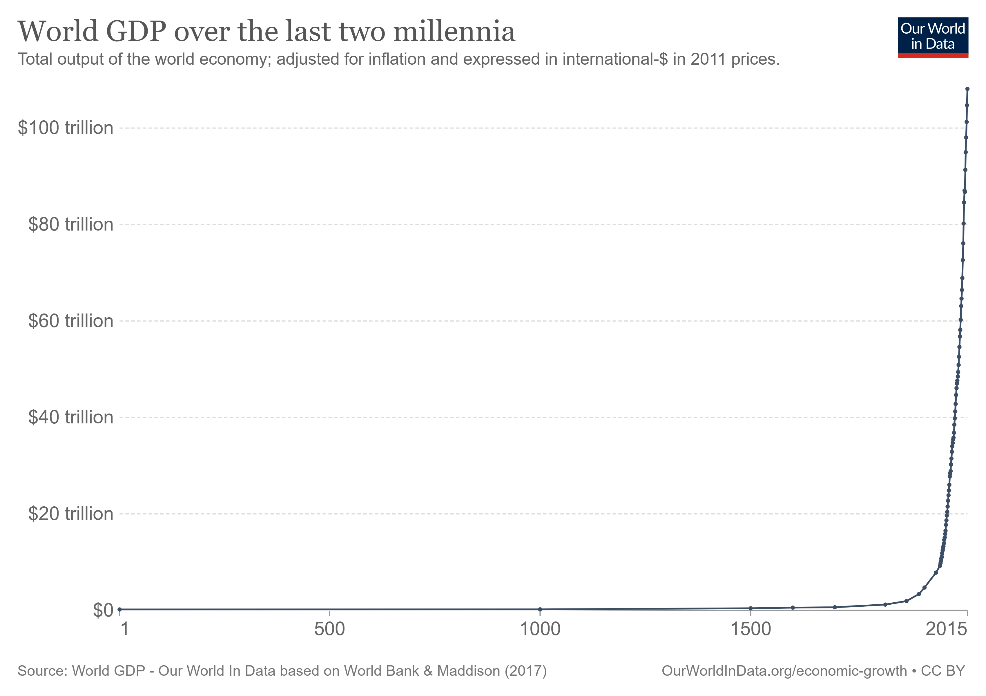 Well, sure, Insight…the economy has expanded. But that’s just because the rich are getting richer, right? Nope. Extreme poverty has collapsed in the last two centuries. Two hundred years ago, 94% of the world population was living in what is deemed “extreme poverty” (less than $2/day inflation adjusted). Today, that number is less than 10%. All while world population has exploded. 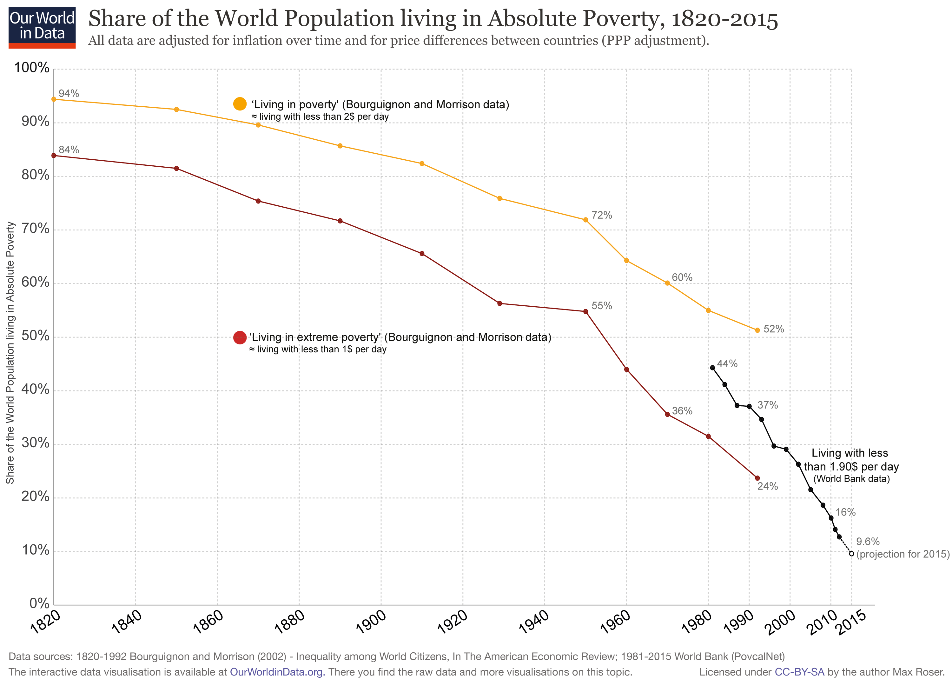 OK, so we’re healthier and wealthier. But there sure seems like a lot more conflict today, right? Wrong. The number of wars between “great powers” has dropped. And the wars that do exist are taking fewer lives. 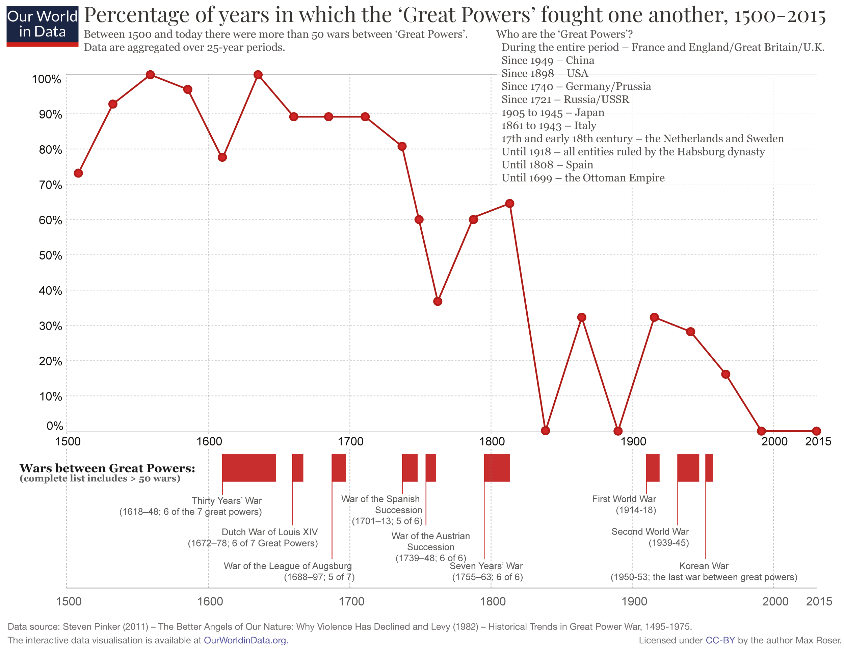 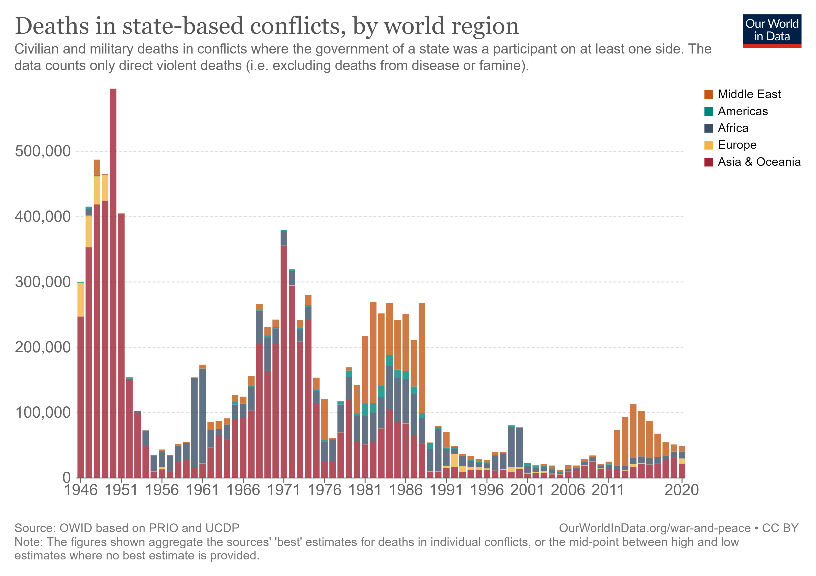 And all of this has happened at a time when the world has become better educated and more literate! 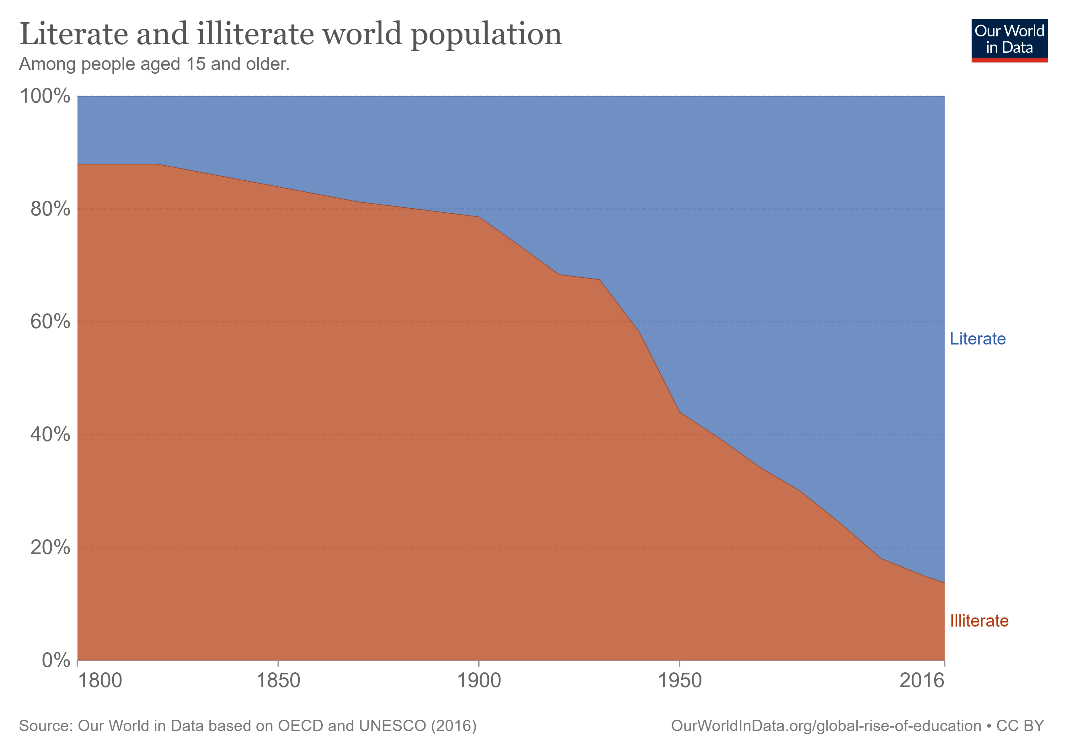 This is just a sample of the data. There’s an excellent book called “Enlightenment Now” by Steven Pinker that delves into this scenario in much greater detail. But the simple truth is this: by nearly every measurable trend, the world today is safer, healthier, better educated, and wealthier than at any time in human history.

It’s notable that most of the changes in these data sets began not long after 56 Americans changed the course of history by being so bold as to claim, “that all men are created equal, that they are endowed by their Creator with certain unalienable Rights, that among these are Life, Liberty, and the pursuit of Happiness.”  Statistically speaking, they nailed it. Our ability to achieve Life, Liberty, and the pursuit of Happiness has skyrocketed in the last 246 years.

But there is a vast difference between the pursuit of Happiness and the achievement of it. As you know, it is human nature to constantly be moving the goalposts, to constantly be trying to achieve more. And for good reason. When they wrote that amazing document 246 years ago, it only applied to a small percentage of the colonial population: land owning men. Today, while not perfectly, it applies to all our citizens.

What does this have to do with the economy and the markets? We wanted to remind you of the base case. Because the base case is good. But sentiment still matters in the short-term. And, as we noted at the top, sentiment isn’t particularly good right now. But unless you believe that millennia worth of data is going to be reversed in the next few months or years, there is reason to have a high level of confidence in what the future may hold.

And, despite what we see on TV and the internet every day, there’s still reason to be proud of this “Shining City on a Hill.” We may not get it right all the time, but our example has led to levels of freedom and prosperity the world has never known. We shouldn’t be ashamed of that.