The Weekly Insight: It’s About to Get Interesting 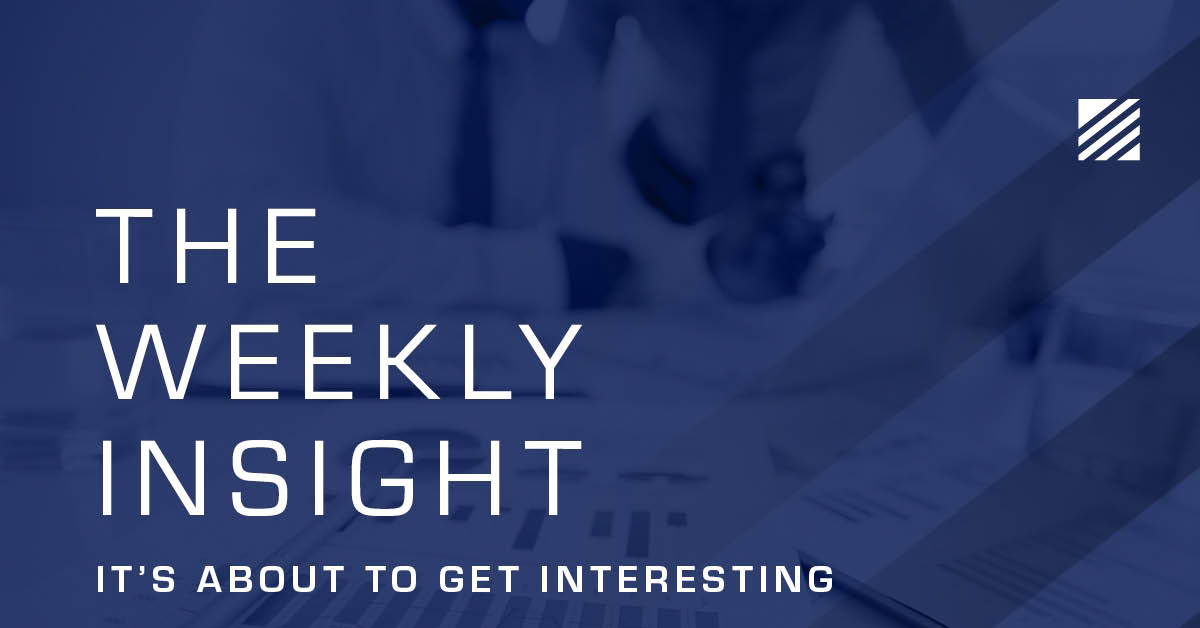 And just like that…summer is gone!  We hope this finds you having had a relaxing and enjoyable Labor Day Weekend.  It’s time to pack away our white clothes, dig out our sweaters and watch a little football on the weekends!

As with most “get away” weekends, the economic and market stories were hard to come by last week.  Things were quiet.  But the end of summer typically means a heating up of activity in the markets and we’re excited to see what the next few months bring.

September has the potential to be a pivotal month for the markets as we move toward the close of the year.  With that in mind, we thought we’d spend a little bit of time on the key storylines as this month proceeds.

We don’t put a lot of stock in the “X-month” is a good month to sell (or buy) theory.  The world just doesn’t work like that anymore.  For example, historically the first few months of the year are typically low volatility and positive for markets.  How did that work out in 2020?

But we also know you can’t ignore history either.  As the saying goes “history may not repeat itself, but it often rhymes”.  And history tells us that September often serves as the impetus for a fall and early winter period that can be volatile and – often – positive for the markets.

The “VIX”, as shown below, is a measure of volatility in the market.  As you know, volatility can be a very good thing (upward volatility) or a very bad thing (ugh…think March 2020).  History tells us that volatility is elevated as we close out the third quarter of the year. 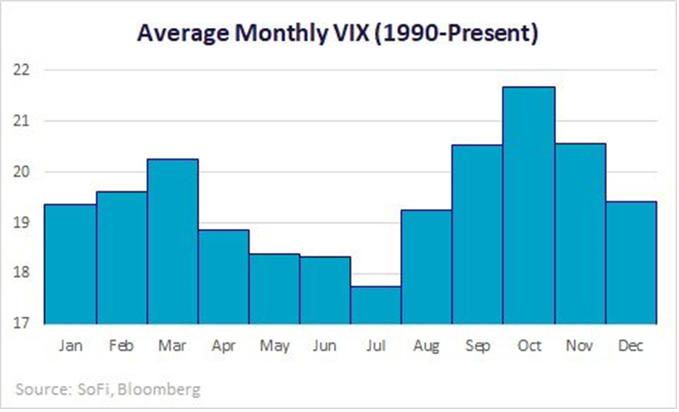 Why might that be?  We’ve talked frequently about how instrumental the decisions coming out of Washington are to the success – or lack thereof – of the stock market.  It turns out that September is an important part of the legislative calendar as the fiscal year for the Federal government ends on September 30th.  That means budgets, tax bills, etc. typically need to be hashed out by the end of this month.

Historically, this volatility hasn’t been a bad thing as you can see from the chart below.  And the markets have largely been following this trend in 2021. 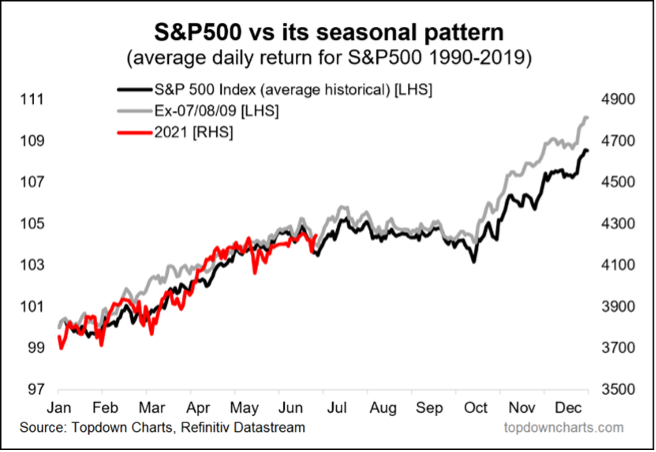 We dove into this topic last week, but it’s important to reiterate.  We generally believe we’re going to have some answers on the tax portion of the Biden budget request later this month.  That will provide a lot of clarity for what the rest of this year is going to look like.  Both corporations and investors will be able to adjust their strategies to best take advantage of the new rules.

How bad those rules will be for investors is yet to be determined.  But an opinion piece in the Wall Street Journal by Senator Joe Manchin (D-WV) should give those anticipating a big tax increase pause.  We’d encourage you to read it by clicking here.

He calls for a “strategic pause” in this process until we know more what the impact of inflation and rising COVID cases might be on the economy.  And he notes that (we’re paraphrasing here) if we empty both barrels of the gun now, we won’t have any ammo when the economy next really needs it:

“While my fellow Democrats will disagree, I believe that spending trillions more dollars not only ignores present economic reality, but makes it certain that America will be fiscally weakened when it faces a future recession or national emergency.”

His stand on this issue is important.  As we’ve told you time and time again, without his vote, this bill won’t pass.  We’ve had many colleagues tell us “Ahh…he’ll fold eventually”.  That may be true.  But you must give this guy credit.  He’s been saying the same things – and saying them loudly – much to the dismay of his party.  And he’s been doing it since last November.  He’s going to play a vital role in this process, and we should have a clear idea of what that looks like by the end of the month.

Yeah…we’re sick of writing about it too.  But the shape of the pandemic matters a lot this month.  With kids going back to school and sneezing all over each other, there is a risk we see another bump up in cases.  But, if the CDC is right and we start to see a moderation of cases, that could be very good for the market.

Wait!  What?!?  You didn’t hear that the CDC is saying cases should be moderating in the coming weeks??  Yeah…neither did we.  That doesn’t get talked about much.  But it’s right there on the CDC website.  The chart below is the current COVID case data (as of last Friday) with CDC projection from 4 weeks ago.  As you can see, we’re starting to top-off below the previous expectation.

And this chart shows the current forecast from the CDC.  We still have a hard march ahead, but it shows case counts starting to decline after next week.  Let’s keep our fingers crossed.

If this data is right, that’s good news for the market and the economy.  But we just said the forecast from four weeks ago was drastically wrong.  This may be as well.  By the end of this month, we should have a much better idea.

As crazy as it may seem, we’ve already entered the final month of the quarter.  In just a month we’re going to be talking about earnings data.  But this month the expectations around that data are going to be important.

We know that Q3 earnings are not going to be like what we saw in Q1 or Q2.  Those quarters were competing against the worst two quarters of the pandemic, so they looked artificially amazing. 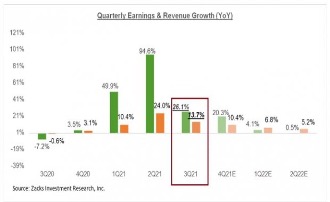 26% earnings growth and 13% revenue growth would be outstanding in any other year.

But that’s not our biggest concern right now.  Instead, it is the expectations.  As we’ve noted in previous memos, historically analysts hedge their bets as we get close to the end of a quarter.  They tend to trim their estimates for individual companies and the broader market.  But in the last two quarters, that didn’t happen.  Expectations grew and grew right up until the end.

That may not be the case in Q3.  As you can see by the chart below, expectations for Q3 have essentially stalled out over the last month.  If that trend begins to trail down, that may be a cause for some additional volatility in the market. 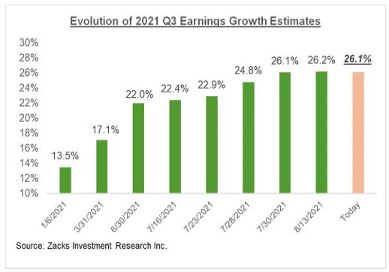 That’s all for this week.  We hope this finds you well and rested.  It’s time to tackle a historically fun month in the market!