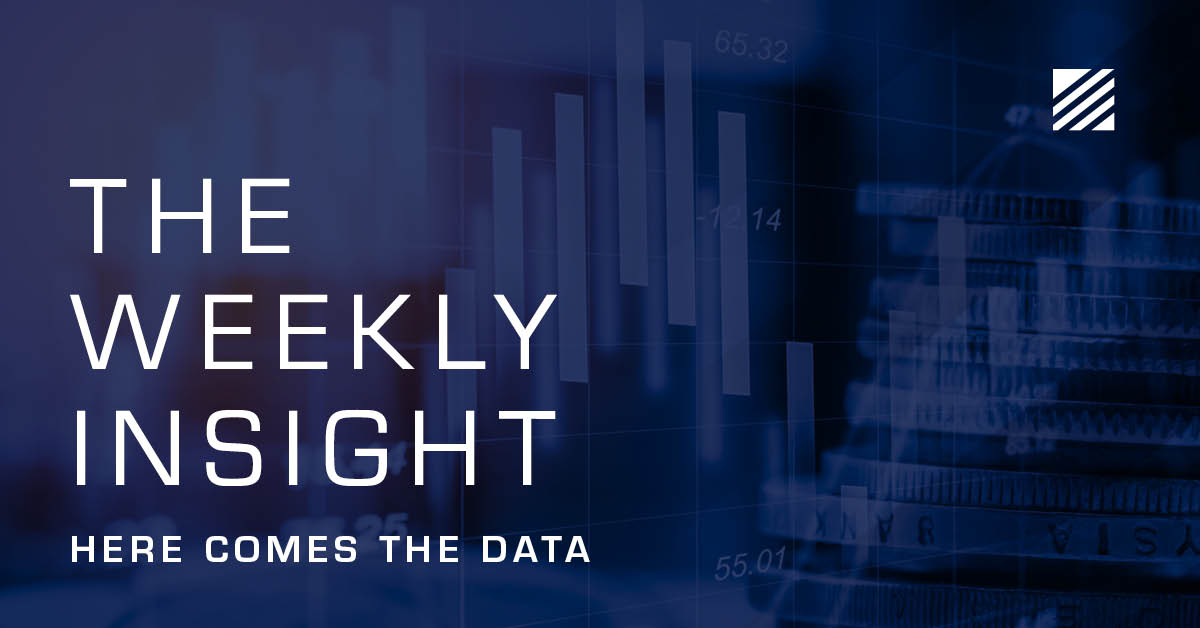 Last week provided some meaningful data in the world of finance and economics. Market participants had plenty to chew on as a deluge of economic data was released throughout the week including updated inflation and retail sales data. Additionally, the market began to dig into earnings reports as the big banks kicked off the start of Q1 earnings season.

The data is particularly interesting for a couple of reasons. First, most market data is compared on year-over-year basis. These comparisons are about to be real “attention getters” as we stack up this years’ numbers with last year when the economy began shutting down. This is known as the “base effect” and will be most notable in year-over-over earnings and inflation comparisons. Second – and most important – the impact of the Federal Government’s grand experiment to inject trillions of dollars directly into the economy is starting to show in the data.

As the great Benjamin Franklin once said, “…in this world, nothing can be certain except death and taxes.” Perhaps we should add a third line to this which would go something like this, “give American’s stimulus money and they will spend it.”

If they have the money, you can always count on U.S. consumers to spend it at stores, restaurants and online.  This is exactly what happened last month with retail sales skyrocketing 9.8% in March.  This was well past the 6.1% analysts were expecting and brings sales up nearly 28% compared to March 2020. 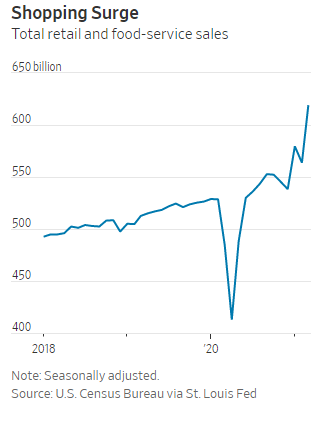 As we touched on last week, there are a lot of positive forces happening for consumers right now.  Job numbers are improving, restrictions in stores and restaurants are easing, and many Americans are flush with cash from stimulus checks and tax returns.  Last month the Federal Reserve reported that U.S. household net worth stood at an all time high of $130T at the end of 2020 which is up 10% from the end of 2019.  And this number is likely even higher now with additional stock market gains and more than $376B in stimulus checks delivered to households from the most recent stimulus package.

Consumers are growing more confident and that is good news for the economy.  This is reflected in the latest update of the Consumer Sentiment Index which rose to its best level in a year. The stimulus money is clearly working as intended.  So far so good.  However, the bigger issue on investor’s minds is how is this impacting inflation?

By now many readers are likely starting to grow weary of our inflation commentary.  We have brought this issue up several times over the last few weeks because, like it or not, inflation will be front and center this year and beyond as the Fed – and markets – try to discern how quickly prices will be impacted from all this spending.  We all know there is no free lunch.

The phenomenon of inflation often starts with producers.  Increasing prices on commodities and other materials forces them to pass those higher costs on to consumers.  Last month the Producer Price Index (PPI) rose 1.0%.  In the last 12 months the PPI has surged 4.2% for the biggest year-on-year rise in 9 ½ years.

On the consumer front, the Consumer Price Index (CPI) increased 0.6% in March and is now up 2.6% from a year ago.  This is the highest reading we have seen since August 2018 with the main upward pressure coming from rising energy prices.  The “core” reading – which excludes volatile items such as food and energy – is up 1.6% versus a year ago.

As we stated at the beginning, this data comes with a caveat.  Due to the “base effect” these numbers are going to be higher than we are used to seeing.  To the liking of the Fed, equity investors did not even flinch on the news of rising PPI and CPI this last week as they look past the sticker-shock effect.  Federal Reserve Chair Jerome Powell has been constantly reiterating that the expected rise in inflation will be transitory and that inflation will likely subside later this year into 2022.

We will wait and see what happens.  Either way – in the near term – we are going to see inflation readings spike as consumers spend their extra money and supply chains try to catch up.  The Fed has acknowledged this and is doing its best to stifle investor fears by providing reassurance that it has ample tools to control inflation.

The highly anticipated Q1 earnings season is finally here.  Investors have been waiting to catch a glimpse of how the prospects of recovery are impacting the bottom line of the largest corporations.  Analysts have high hopes this earnings season and are predicting the S&P 500 will grow first-quarter earnings 27% from the same period a year earlier.

We always pay particularly close attention to the first week of earnings season because it is kicked off by the big banks on Wall Street.  Here at Insight, the Financial sector is a key component of our investment process taking up at least a 10% allocation in each of our core portfolios.  Fortunately, the Financial sector has been one of the top performing sectors so far this year.  The sector is up 19.44% YTD only behind Energy which has surged nearly 30% this year. 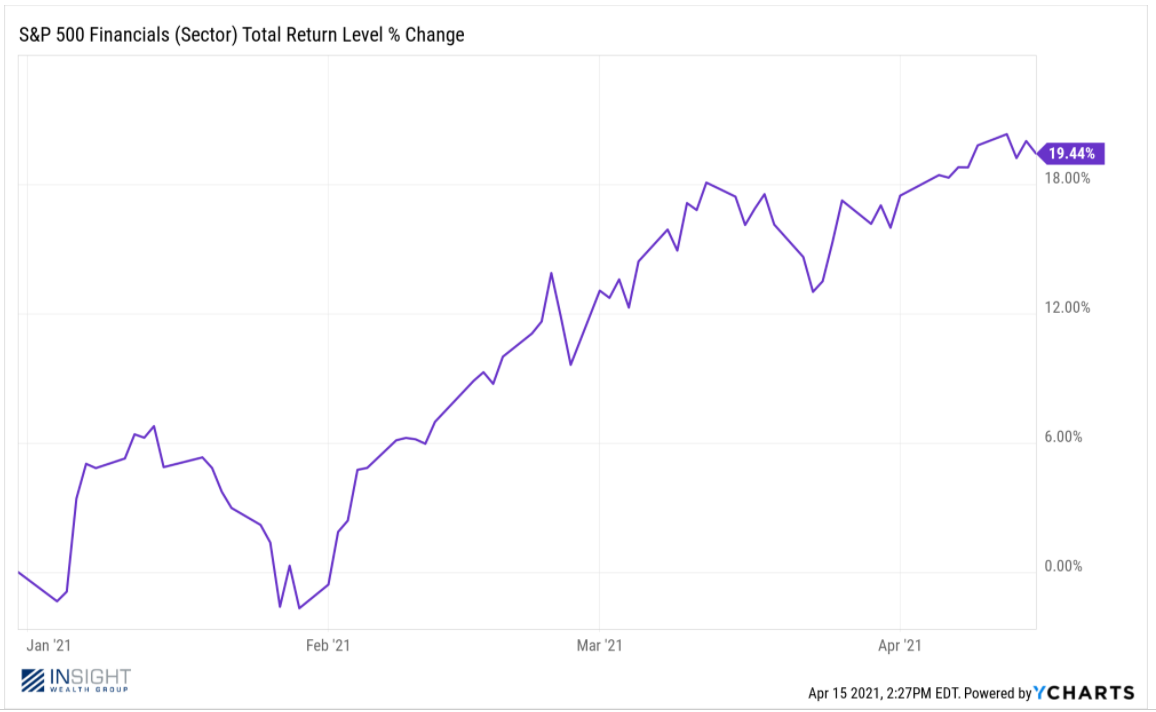 The big banks came out of the gates hot to start the year posting robust earnings figures and thrashing consensus estimates.  The chart below illustrates just how handily each of the major banks beat analyst expectations.

The nation’s largest banks benefitted from increased investment banking activity, rising long-term interest rates, and releasing reserves.  After the pandemic took hold in the U.S. early last year, the big banks set aside billions of dollars in loan-loss reserves in anticipation of a wave of consumer and business loan defaults.  However, thanks to vaccines and unprecedented support from the Federal Government those big losses never materialized.  Now, banks are putting those extra funds to work and starting to cash in.

The next big catalyst for banks going forward is the return of loan growth.  Large U.S. lenders saw their loan books shrink in 2020 for the first time in more than a decade.  Meanwhile, deposits flooded in faster than many banks could find profitable ways to lend them.  In the absence of loan growth, deposits are costly and require banks to hold more capital. 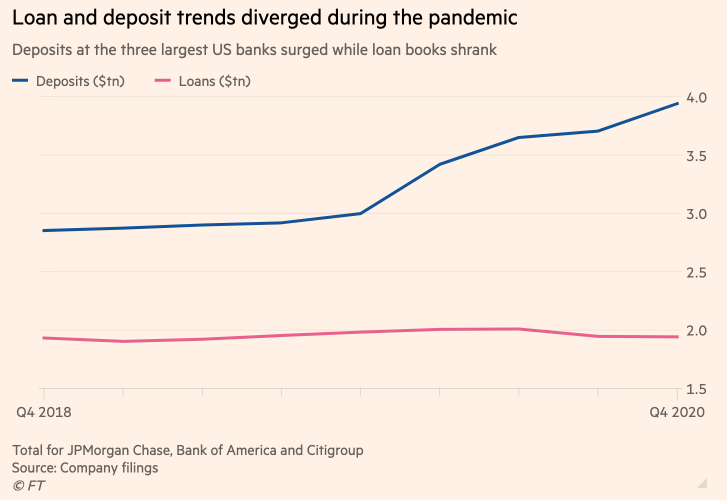 Loan growth will be a key metric to watch for banks and the economy as the year progresses.  Given a strong start to the year and still relatively low interest rates, loan growth is poised to rebound later this year as businesses and consumers continue to gain more confidence.

In the meantime, we will continue to stay course and monitor the incoming data.  As always, please reach out to us if you have any questions or concerns.

Have a great week.