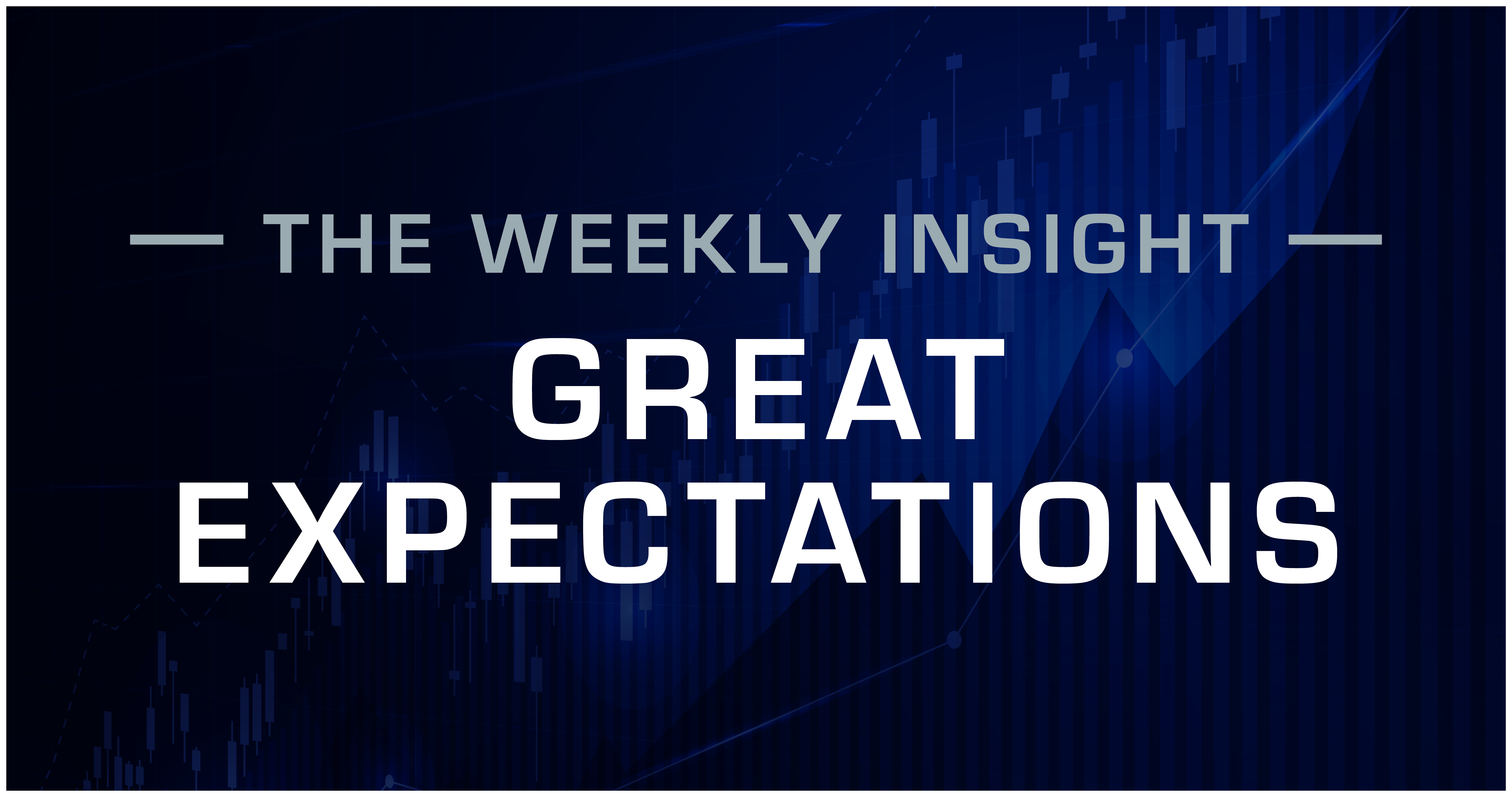 Human nature instinctively does poorly with uncertainty. We have talked in past memos about how emotions negatively impact investor performance and there is nothing that gets the emotions rolling quite like not knowing what is going to happen. Fear sets in and mistakes get made.

As we enter July, however, we can begin to see some clarity – at least as it relates to the economy and the markets. For the first time we are going to know how the virus impacted the economy and we are going to be able to make informed judgements on how to proceed. That is good news, but it also means there is risk in July as the data begins to roll in. Let’s explain why.

It is important to remember the timeline of this virus and its impact on the economy. To do that, let’s look at a chart of cases in the United States: 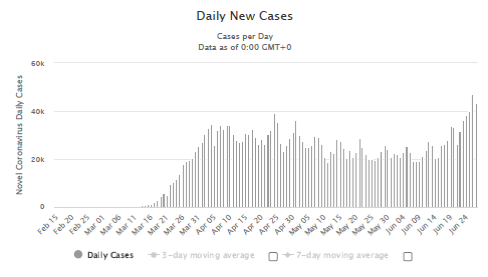 As you can see, we did not start to even register substantial cases (i.e. community spread) until the 2nd half of March. It was on March 16th the White House publicly recommended locking down through their “15 Days to Slow the Spread” Campaign. And it was not until March 21st that the first two states (Illinois and New Jersey) implemented “Stay at Home” orders.

That means Q2 is when the vast majority of the economic pain was felt across the country. Which also means that – while we have had some view into the impact of the virus – we have not seen a full quarter’s worth of hard data to understand what the end game looks like economically. That is about to change in July.

Before we look at the data we are watching, it is important to understand what makes a win or a loss in July. There is no expectation from market watchers the news in July will be good. It won’t be!  Instead, July is a game about expectations. Will the very bad news be better or worse than the “consensus estimate”? Data that is worse than the estimate is trouble. Better than the estimate? Even though it is still “very bad news”, it is actually good news.

What are the Expectations?

There are countless pieces of data at which we can look (and we do when managing your portfolios). For the sake of this memo, however, we want to key you in to five key topics, what the expectations are today (they will change as we get closer to release), and when to expect the announcements. These will be some of the biggest drivers next month.

Also, before we dive into the data, do not be surprised over the coming weeks if there are some jitters as we get closer to this data becoming a reality. We would anticipate there being increased volatility over the next 30+ days as the market digests this information. When it is all said and done, however, we should have a much clearer roadmap as we move into August (just in time to worry about the next big driver for the market:  The Presidential Election).

The most important result as it relates specifically to individual stocks will be the Q2 earnings reports. Earnings do not come out on a specific date, although most S&P 500 companies will release their earnings in the month of July. The big banks are some of the first large companies to go and that process will start with JP Morgan on July 14th. Their reports should give us a much better understanding of how the financial system is holding up through this process.

June unemployment figures will be released on July 2nd. As you will recall, the May report was a huge surprise to the upside. The consensus estimate was 7.5 million jobs lost. The report, however, showed 2.5 million jobs gained.

We do not expect such a positive surprise this month – but we will see. The consensus estimate is 3.0 million jobs gained in the month of June. If we beat that number, it should start the month off on the right foot. A bad miss would not be good news.

Also, keep an eye out for the revision of the May number. They always update previous data as they move along. A strong revision downward to the May figures would not be positive.

The non-manufacturing PMI measures the health of the service sector – the area probably hardest hit by the lockdowns that have been in place over the last few months. PMI measures whether the sector is growing or shrinking and the rate at which that change is happening. A number greater than 50 means expansion.  A number less than 50 means contraction.

Last month the number was 45.4 up from a low of 41.8. The expectation for this report, which will be released on July 6th, is for a further increase to 48.2. This is a great example of the “expectations theory”:  if PMI comes in at 48.3 that would mean the service sector is still contracting, but would be considered good news because it would be “shrinking less” than expected.

As you have heard us say many times in the past, the U.S. economy is driven primarily (more than 70%) by one single factor:  consumer spending. Americans are very good at spending money. One of the best measures of that spending is retail sales.

As with employment, retail sales surprised to the upside by growing 17.7% in the May report. The consensus for the June report – coming out July 16th – is 8% growth.

GDP is the granddaddy of them all – considered by many to be the total measure of economic health. It doesn’t come out until the very end of the month – July 30th – but will be highly anticipated throughout the month.

Right now, the consensus estimate is – frankly – very bad. The current estimate is that the economy shrunk by 35.3% during the 2nd quarter. It will be interesting to see how this number changes during the month as other key pieces of data become available.

We spent some time in last week’s memo talking about the extreme discounts we are seeing in the high yield debt space. This week we wanted to provide the punchline: a strategy to take advantage of the dislocation.

As we mentioned, when the spread between high yield debt and treasuries crosses 900 basis points – as it did earlier this year – the historical return in that space is substantial. It averages more than 25% in the first year and more than 15% annually over five years.

But much like mortgages coming out of 2008, it depends which pieces of debt you own. Owning a legacy portfolio which has some good debt but also has some debt likely to face default is not a recipe for success.

Thanks to our relationship with Arete Wealth and our friends at Taiber Kosmala, we were able to be connected with an IPO for a new, limited-term high yield fund put together by First Trust. First Trust is a well-respected debt manager and the terms of the fund will allow us to deploy fresh cash into the debt market allowing their managers to look for good opportunities without the hangover of bad legacy assets.

This fund – which is fully liquid – is expected to yield between 7.00% – 7.75% and we anticipate there will be opportunities for capital gains due to the discounts available in this space today.

The fund – ticker symbol FTHY – is being added to our Enhanced Yield and Conservative Growth portfolios later this week. You should notice it hitting accounts on Tuesday. Sorry for “nerding out” on a fixed income fund – but we are excited about this opportunity.

Please forgive us editorializing a bit today – but Independence Day is one of our favorite holidays. Its meaning – and the document it celebrates – is as important today as it has ever been. In these trying – and divided – times, we would encourage you to remember the basis for the Declaration of Independence: that every man and every woman has an opportunity to write their own story – good or bad – and our freedom is not just something given to us by other men, but is an unalienable right.

Freedom is a double-edged sword. We have the freedom to succeed. But we also have the freedom to fail. It seems we – as a country – have been doing a bit more of the later lately. But the greater angels of this amazing country have risen from troubles before, and we believe will undoubtedly do so again.

So, we hope you can enjoy the holiday weekend with your families and friends (socially distanced, of course!). But we also hope you will have some time to reflect on the responsibility we all have to move this freedom machine forward. We are blessed with tremendous opportunity in this country – but we must own it!

Just a quick heads up that our offices (and the markets) will be closed on Friday, July 3rd to allow our team the opportunity to celebrate Independence Day.  We will be back in the office on Monday, July 6th.