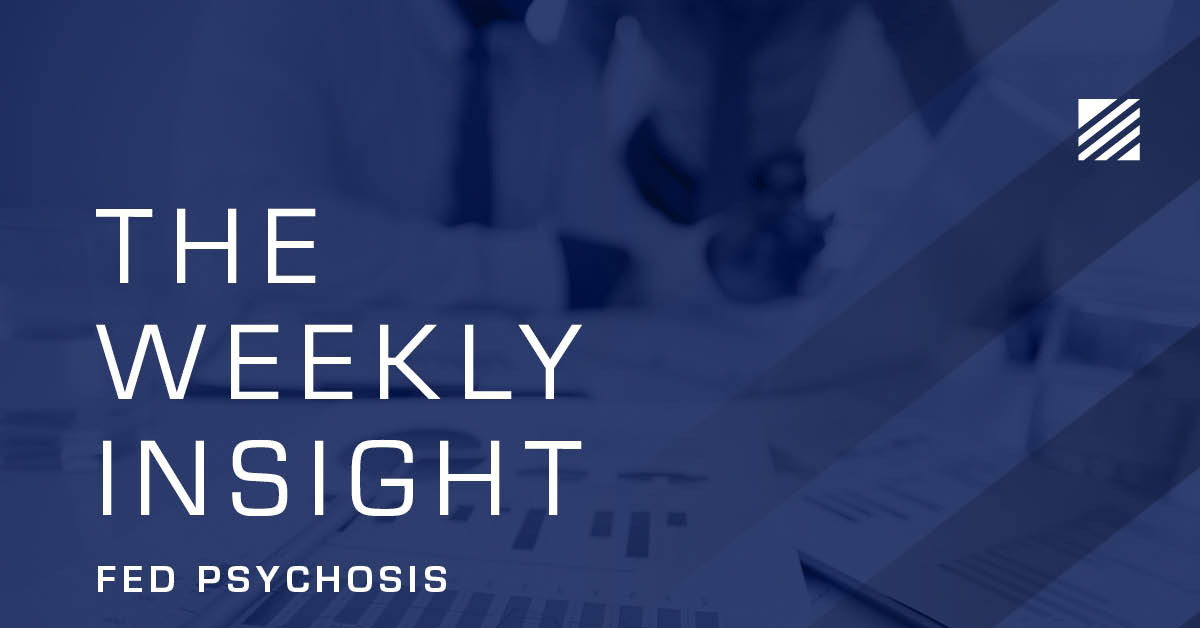 Editor’s Note: Before we jump into this week’s Weekly Insight, we wanted to introduce a new companion to our weekly memo. Starting this week, you will also be able to listen to our weekly podcast (completely unoriginally titled The Weekly Insight Podcast) wherever you get your podcasts. It will be available on Apple Podcasts, Spotify, Amazon, etc. We will also have a link to it at the top of each memo. We hope you enjoy!

“Worst Start to a Year…EVER!” That’s what you were probably hearing if you turned on the financial news in the last few weeks. So, as we sit here on the last day of January, it is worth looking back before we look forward. How exactly did the month turn out (through Friday)? 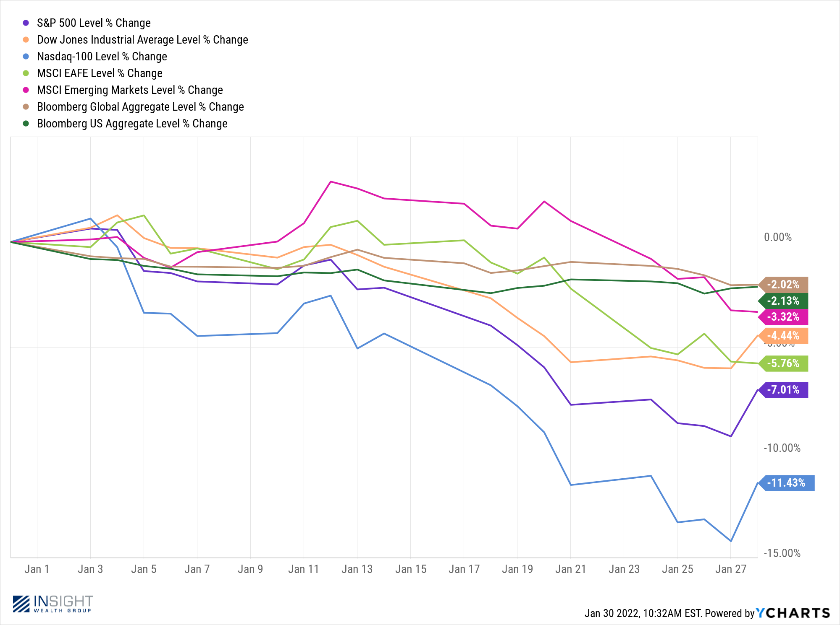 At first glance, it is not pretty. There was nowhere to hide from this reversal. You lost money in January if you were invested in U.S. stocks, international stocks, emerging markets, global bonds, or U.S. bonds. Everything took a hit.

Last week was the most dramatic. The market prepared itself for the Fed meeting like a petulant child. Just for fun, here is the chart for the market intraday on Monday, Tuesday, and Wednesday (the day of the Fed announcement): 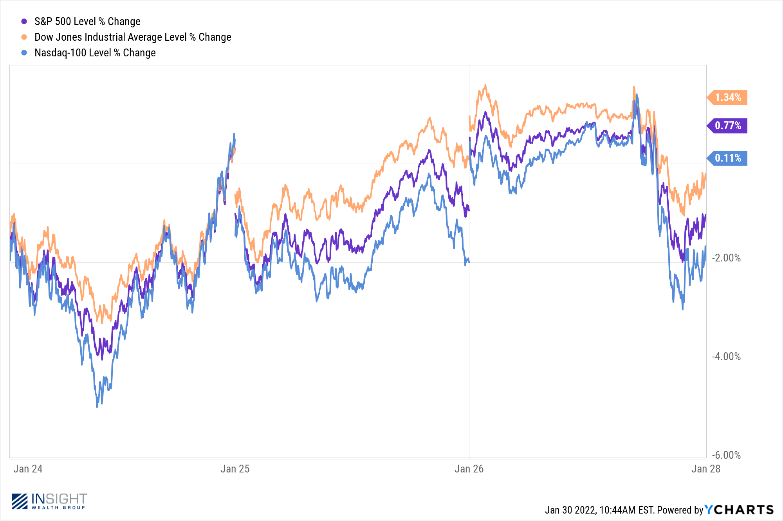 The only real way to describe this? Looney. The world was so focused on trying to predict the future (what the Fed would say) that they started to ignore what it all means in the end. But in the end all U.S. markets ended the week higher than they started and we have a lot more information than we had one week ago. Now that we are past the drama, let’s focus on some fundamental issues that are going to drive the market in the coming weeks.

Someone take away Jerome Powell’s microphone…please. We do not know what it is, but the market just cannot stand to hear him speak. That was never more obvious than on Wednesday.

At 1:00PM CST, the FOMC released their minutes from this week’s meeting. The minutes announced three main points:

Basically, the Fed landed where most of the market expected them to land. Over the next half hour U.S. Equities were up strongly. Then Chairman Powell stepped to the podium and…well…the S&P lost nearly 200 basis points of performance between then and the end of the day.

So, what exactly did Fed Chairman Powell say that was so disastrous? Nothing. He just did not give the market the assurances they were hoping to get. When asked if they might do larger or more rapid interest rate increases – he was non-committal since the Committee had not yet discussed it. That type of answer leaves open the fear of a major change (bad for equities), but it is also still unlikely. Markets cannot often see nuance.

We would highlight something else the Chairman said on Wednesday that should be a source of optimism when asked about what impacts inflation:

This is a critical point we do not often hear addressed. Yes, the Fed raising rates is a tool to be used to combat inflation. But we are also not going to have trillions of dollars pumped into the U.S. (and other) economies that helped cause this situation. And the supply side issues will naturally work themselves out. All of which is a recipe for bringing inflation under control.

In the end, the Fed meeting was almost entirely what the market expected. And “Fed Volatility” should go back in its corner for a few months until the March meeting.

There have been some high-profile earnings misses so far this year, coming from companies that have been immensely popular in the market over the last year (think Netflix and Peloton). But has that meant a bad earnings season? No. In fact, earnings beats this quarter continue to outpace historical norms. But you probably would not have expected that if you were not paying attention. 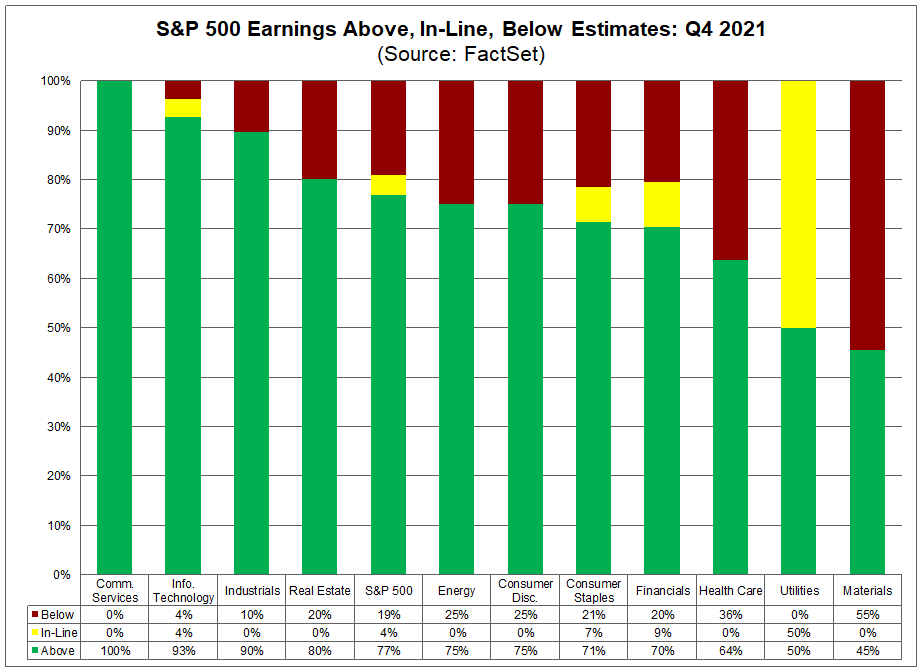 Even better, as of Friday, the 12-month forward P/E for the market is 19.2x earnings. This is the first time we have been below 20x in a while and is awfully close to the five-year average of 18.5x.  This is not a radically overpriced market.

We have talked at length in previous memos about the economic impact of Omicron. Despite the less virulent nature of the variant, the mass of people that had to stay home because of the virus (including your author!), has had an impact on the economy.

Now is certainly not the time to get lackadaisical about the virus. Even though we are down 1/3 from the top, our current case counts are still more than 2x the highest level we saw pre-Omicron.

But the sheer rate of the drop in cases is enough to give us hope that February sees a significant return to normal for the availability of workers in the economy. That is good news.

We have not tackled this one in these pages yet, and it is long overdue. What is happening in Ukraine has the potential to have an impact on markets around the globe. We remain unconvinced a full-scale ground war is going to break out – but it is a possibility. With that in mind, how would that impact you? We would suggest two areas: food and fuel.

We once heard Russia described as “an oil company masquerading as a country.” That is an apt description. And it also helps us focus on the economic mechanisms through which the Biden Administration might hope to impose pain and punishment on the Putin regime. Oil and natural gas – and Russia’s access to international markets for those products – are going to be at the forefront of the sanctions process.

That will drive up energy prices across the globe. We do not want to sound like we are excited for this prospect – we are not – but our energy overweight in portfolios would be benefited from this outcome.

On the other hand, Ukraine is essentially the “Iowa” of the old USSR. It is a breadbasket. It is a massive exporter of grains. U.S. grain markets have taken notice in recent weeks as we have seen the cost of grains rise significantly as the tension has grown. 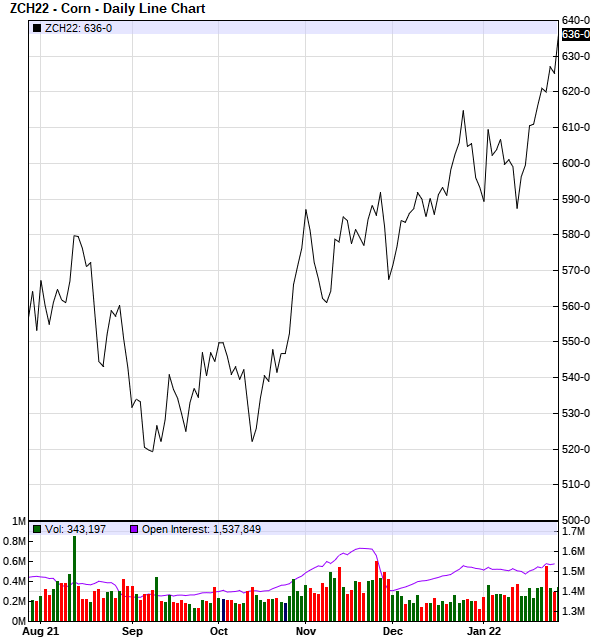 Both food and fuel getting more expensive is going to hit consumers directly in the pocketbook. But ironically, these are the two items the Fed excludes from their calculations of inflation. They say they are too volatile and not able to be controlled by Fed policy. We would agree – but real inflation may end up being quite different than what the Fed measures if a war kicks off in the former USSR.

We’ll end it there for this week.  Looking forward to a great February!